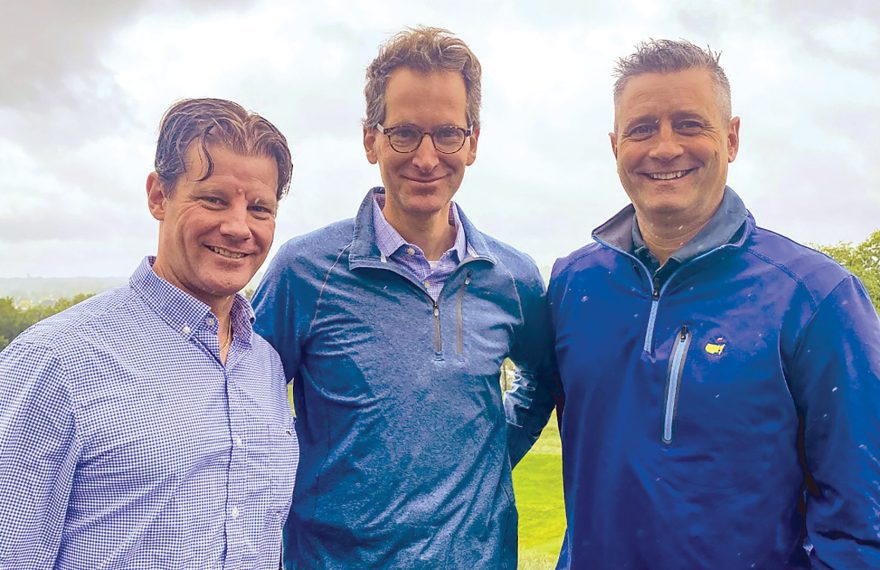 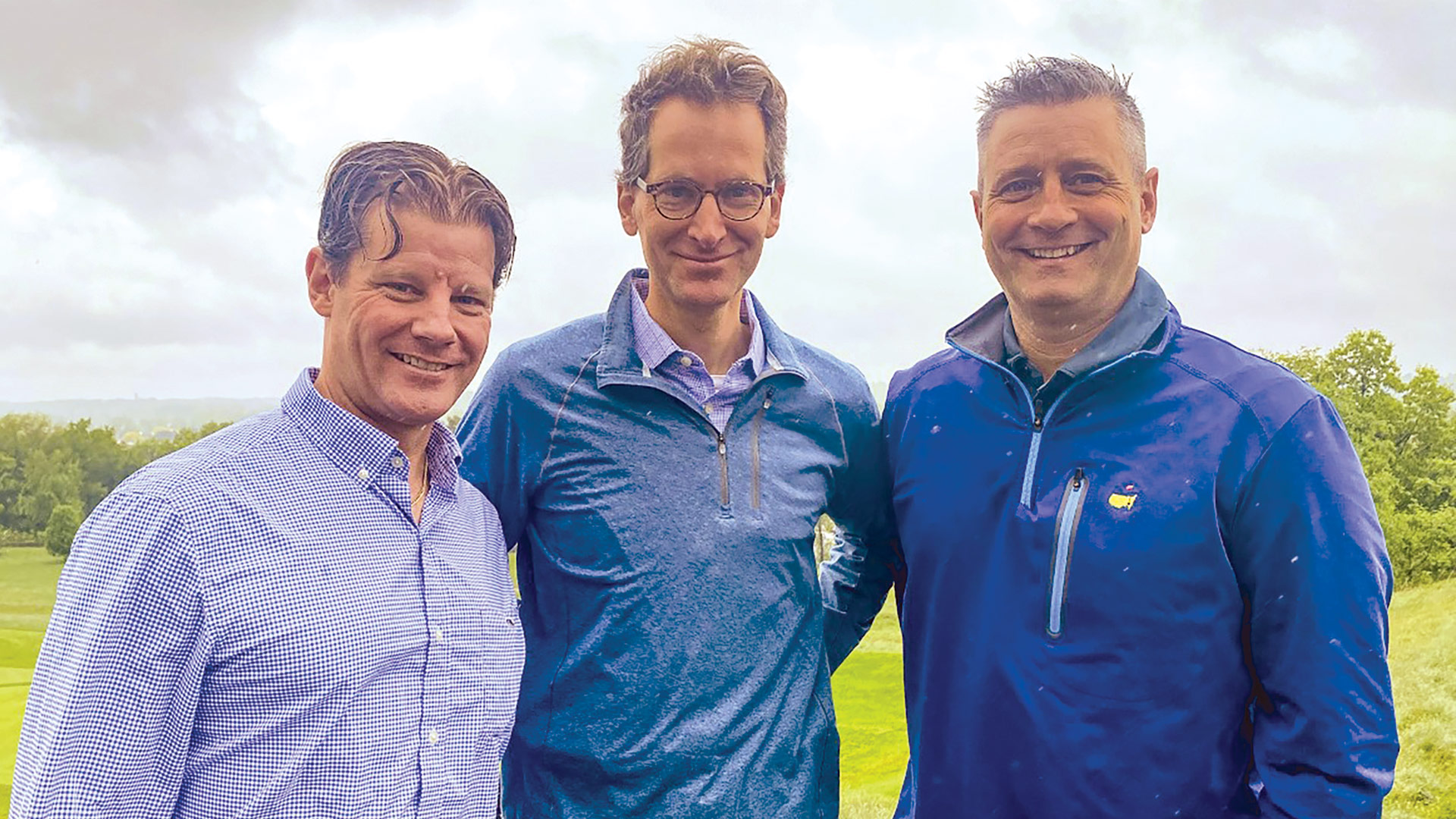 The three partners of the Alchemy Fund, from left, Chris Bignell, Chris Sims, and Brett Gearing, say the Pioneer Valley has no shortage of entrepreneurs with ideas that can be turned into profitable companies.

When BusinessWest first spoke with the founders of the Alchemy Fund four years ago, their vision of helping entrepreneurs spin their ideas into profitable businesses by providing funds, advisory services, business acumen, and more, was itself just an idea.

And as the Alchemy partners started raising the fund, their idea was met with some skepticism, they recalled, noting that some wondered out loud if there would be real need for the services they wanted to provide — if there would be any deals to be made.

In the four years since, those doubts have largely been erased.

“It turns out there are a lot of people in this area who have the urge to innovate,” said Chris Sims, co-founder and partner of the Alchemy Fund. “We’ve found a bunch of people who are dreamers and ideas people, who saw opportunities and started to act on them.”

And with help from the fund and its founders, many are moving well beyond the concept state and into operation. Overall, Alchemy now has 13 portfolio companies across its two funds that together boast more 73 employees — the majority of which are local.

“It turns out there are a lot of people in this area who have the urge to innovate. We’ve found a bunch of people who are dreamers and ideas people, who saw opportunities and started to act on them.”

Holyoke-based Clean Crop Technologies, which produces technology that removes contamination from foods, is one of those companies. Clean Crop could have located anywhere — but chose to be in Western Mass. and is making it happen here through the help of many components to the region’s entrepreneurship ecosystem, including the Alchemy Fund.

“We were introduced through Forge, an innovation and manufacturing ecosystem support group with offices in Western Mass.,” said Dan White, the company’s CEO and co-founder. “They introduced me to Chris Sims. Chris and Alchemy were the first institutional capital commitment on Clean Crop’s seed-round raise.”

Alchemy helped Clean Crop create a battle plan to turn what it had, something that works in academic papers, into a working product — while also providing insight into how to bring it to customers. In the course of doing so, Clean Crop was able to do complete two rounds of major funding, both of which Alchemy participated in, from several investors, including the MassMutual Catalyst Fund.

“Chris is an extended part of the Clean Crop family; he has helped us sharpen our strategy at key intervals, and provides executive coaching and advisory office hours twice a month with our leadership team,” White explained. “He consistently helps sharpen our focus and prioritize resource deployment to the most relevant questions at that moment.”

There are several emerging success stories like Clean Crop in the Alchemy Fund portfolio, and together they confirm what the fund’s partners knew back in 2018.

“There’s some real validation to what we believed would happen,” said Brett Gearing, another of the founders. “We’re actually seeing and witnessing what we envisioned. It’s exciting for us for sure.”

Indeed, a lot has happened at Alchemy over the past years. For starters, its founders have launched two funds to invest in early-stage startups outside of the tech hubs of Boston and New York — with a focus on Western Mass. It has deployed all of the capital in the second fund, and will commence fundraising for its third fund soon.

“Within two years we will definitely have our third fund raised,” said Chris Bignell, Alchemy partner. “There might be some geographic expansion, and there might be a different mix of companies that we would invest in.”

Geographic expansions, yes, but Alchemy is keeping its focus local. Sims explained that in places like Boston or New York, venture capitalists typically end up chasing the same two deals as everyone else — in other words, they have an abundance of capital with a shortage of deals.

“Chris is an extended part of the Clean Crop family; he has helped us sharpen our strategy at key intervals, and provides executive coaching and advisory office hours twice a month with our leadership team. He consistently helps sharpen our focus and prioritize resource deployment to the most relevant questions at that moment.”

The reverse is true for Western Mass. Alchemy has run into what could be called a potentially good problem here — a situation where many companies are chasing a limited amount of capital. Competed deals like those in Boston are expensive, so by operating in Western Mass., Alchemy has been able to seize opportunities of the same caliber as those in major tech hubs for just a fraction of the cost.

Opportunities like Clean Crop, which has developed technologies that some are calling game-changers within the food industry.

“By definition, they are pushing the boundaries of something that hasn’t been done before,” said Sims, adding that as portfolio companies like Clean Crop grow and evolve, they attract top talent to the region.

“If you look at the folks we’re drawing into these companies, it’s not just the number — we’re creating a type of employment that literally didn’t exist here before,” he went on. “Now we’re saying you can go work at Clean Crop and help make Holyoke Massachusetts a stop on the road to the next green revolution.”

The seed-round raise White referred to was a start-up fundraising event in 2020 where Clean Crop Technologies raised $3 million — which was followed by a $6 million seed round in 2022, just two years later. He went on to explain that even before that commitment, Alchemy worked with Clean Crop for months to help sharpen its business strategy and target milestones in order to maximize its ability to raise capital.

This is an example of how the fund’s menu of services to portfolio companies extends beyond providing needed capital.

Similar to the way a sports coach would help out an up-and-coming athlete, Alchemy helps its clients upgrade their business model, assign veteran executives as mentors, add differentiating technology, and much more.

“It’s that first 10 yards that are the hardest for people who are disconnected from the norms that are obvious if you live in a major tech hub and everyone around you is doing this all the time,” Sims explained. “Here, it’s a pretty lonely experience because … who do you look to as an example?”

Alchemy has essentially bridged that gap. What the three Alchemy partners have found is that when they get entrepreneurs to the stage where their concepts can attract investments from a seed-round standpoint, they can then coach them all the way to the next level — and the next level, and the next. The companies they work with become competitive not just locally, but nationally.

“They are as good as anybody, which shouldn’t be a surprise,” said Sims.

And there’s another gap Alchemy is seeking to close. When Sims and Brett Gearing founded the Alchemy Fund, they identified a huge gap in venture dollars per capita in comparison to tech hubs like Boston and New York.

Sims, Gearing, and Bignell all concurred that startups like the ones they work with enhance and transform areas like Western Mass. into the type of place someone would want to live and do business. The Alchemy Fund sees the region between Boston and New York overflowing with opportunities, and aims to help make it just as alluring as those metro centers.

“There is something to be said for us getting in at the early stages so that these companies get a flag in the ground while it’s even harder for them to move to make the decision to go to Boston or New York at that point,” Bignell explained. “If we can get them in, get that flag in the ground… they start creating these jobs.”

And the jobs are generally well-paying jobs, he went on, the kinds of jobs that can bring people to an area like Western Mass. And as more of these jobs are created, and more people are drawn to the area, there is a snowball effect, seen in many areas around the country where startups flourish.

Yes, a lot has happened since the last time the Alchemy Fund and BusinessWest sat down together — and the story continues to generate new and exciting chapters.

Elizabeth Sears can be reached at [email protected]