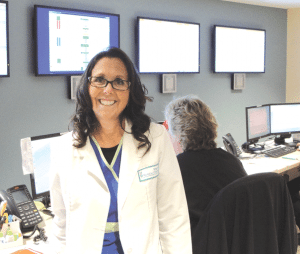 Sharon Adams says the professionals who staff the ‘hub’ are specially trained to monitor and enhance the efficiency of the patient experience.

The screens tell the story. Hundreds of stories, actually.
They line the walls of a room at Mercy Medical Center, appropriately called the ‘hub.’ One screen details the occupant of each inpatient bed and their anticipated time of discharge. Another details patient movement in the emergency room, while other screens keep tabs on various hospital departments. And at any time, specially trained nurses known as clinical care coordinators, or C3s, can call up a patient’s status to make sure they’re getting the care they need in a timely fashion.
“We were looking to some system to pull the operations of the hospital together and find an effective way to improve patient flow and be more efficient,” said Daniel Moen, president and CEO of the Sisters of Providence Health System (SPHS), which includes Mercy. “We wanted a better experience for our patients, and also make it a better place to work for the staff by removing some of the bottlenecks we were dealing with.”
He found a solution when he traveled to Toledo, Ohio with Sharon Adams, Mercy’s chief nursing officer and senior vice president of Patient Care Services. There, they visited Mercy St. Vincent Medical Center, a large, tertiary-care hospital that had implemented technology from a company called Care Logistics. “Sharon and I were there about three hours and said, ‘we have to do this,’” Moen said. “You could walk into their patient-care hub and see almost everything going on in the hospital.”
So Mercy brought the technology to Springfield, dubbing it Care Connect. The effect, Moen said, has been transformative, enhancing communication between providers and ensuring that patients’ time in the hospital is not wasted.
“I call it our air traffic control system for the hospital. It allows us to track patients from the ER to the inpatient side and gives us targets for patient discharges,” he told BusinessWest, adding quickly, however, that technology alone cannot make a hospital more efficient. “It really was a massive process change, and we engaged hundreds of our employees in this process change.”
Those changes suggest that the healthcare industry’s shift toward accountable care — a model of which Mercy has long been on the cutting edge — is definitely taking shape on Carew Street in Springfield, and beyond.
For this issue’s focus on the future of healthcare, BusinessWest looks at how Mercy plans to reach its goal of achieving more efficient, coordinated care without sacrificing quality — a challenge for all hospitals at a time when growing cost constraints demand it. In many ways, this initiative shows how the future of healthcare is already here.

Hub of Progress
The human element is as critical to Care Connect as the technology. When someone is admitted to Mercy, a C3 works directly with physicians and other providers to track the patient’s progress, plan a schedule of tests and procedures, and come up with an expected discharge time.
The focus is on using time wisely, Adams said. For example, the C3s use details such as when the patient is being transported or when rooms are being cleaned to arrange tests and other care around his or her schedule.
“We’re trying to eliminate the ‘white space’ in the patient stay, when people are waiting for things to happen,” Moen added. “That’s not useful for the patient, and it’s not good for us to be less efficient than we should be. So this was really a unifying point — what can we do to make this better? And having it all coordinated from this hub is important.”
Last spring, in preparation for bringing the Care Connect system online, more than 1,500 employees in dozens of departments were trained on using the new software to coordinate with the C3s.
As for the coordinators, “they were specially trained for eight weeks, full-time, in this patient-flow system and documentation,” Moen said. “The hub is open 24 hours a day, seven days a week. It used to be that things slowed down on weekends; we’re trying to make sure we’re an efficient operation seven days a week, to get patients the services they need all the time.”
Mercy also implemented a program called ‘operational rounding’ every Wednesday, where members of the SPHS senior leadership team join front-line providers in patient-care areas. From their observations, they work together to find ways to improve efficiency and quality of care.
“We’ve made more than 75 specific improvements in patient flow, many impacting quality, such as reducing falls and pressure ulcers and hospital-acquired infections,” Moen explained. “Again, it’s about having an understanding of where we are and where we’re trying to go. This has really been a transformational project for us, and we couldn’t be happier with the results at this point.”
As impressive as the patient-management technology is, Adams added, it doesn’t operate in a vacuum. “We’ve spent years working through what the current processes are, in every department, every place the patient touches. We went through 47 or 50 departments, working with them to ask, ‘this is what we currently do; what can we do in the future? What’s the best thing for patients?’ We’re no longer saying, ‘what’s best for our own schedules?’ It’s all patient-focused.”
It’s also a metrics-driven program, Moen said, and all that data is fed directly to the hub. “We’re taking a lot of different milestones, and we can see where the delays are in the process. This gives us sort of a dashboard to see where we can improve further and document where we’ve gotten better.”
Adams stressed that the C3s have a supervisory role in patient care, and they’re trained to be experts in care coordination. “They understand the resources in the community, what insurance will pay for, and they update the insurance company about why the patient needs to stay longer.”
Documentation is critical. “Clinical documentation supports why that patient should be an inpatient, making sure we are capturing the severity of that patient’s diagnosis. That’s where they work very closely with physicians … saying, ‘you probably need to be documenting why the patient is more complex than we thought.’ They make sure we’re being reimbursed at the level of care we’re providing.
“The physicians feel it’s a very good resource,” she added. “They are pleased when the clinical-care coordinators say to them, ‘you just need to document this.’ They don’t see it as a threat; they see it as a great resource, reflecting all the hard work we’re doing for patients.”

Accountable to Patients
Hospital leaders across the U.S. understand they’re facing a new era of cost consciousness, driven by a growing, aging population, health reform that’s pushing more patients into the system, and the burden of new, expensive technology.
Accountable care is a model by which a team of providers — doctors, nurses, specialists, and therapists — are paid a certain amount to collectively treat a patient. The concept, which Mercy began to pioneer in Western Mass. almost a decade ago, stresses efficiencies like limiting unnecessary tests, but demands quality as well, because preventing rehospitalization is a key goal. Moen said Care Connect goes to the heart of that model.
“We’ve made great strides in all areas. We wanted to reduce length of stay and still make it a better patient experience,” he told BusinessWest. “And because we’re freeing up capacity on the inpatient side, the ER has become much more efficient; there are fewer situations where a patient is held in the ER, waiting for an inpatient bed.”
Mercy has made changes in the emergency area as well, getting patients to a physician or physician’s assistant quicker than before and fast-tracking less serious situations to clear capacity for patients who are more ill. “We’ve taken an hour off the door-to-door time for patients in the emergency room,” Moen said.
Care Connect has also aided the discharge process, he noted, as C3s help coordinate care beyond the hospital, whether it’s skilled nursing, home care, or simply setting up primary-care appointments and following up — all with the goal of preventing readmissions.
“We want to bring these concepts out to providers in other parts of the system, particularly behavioral health at Providence in Holyoke,” he said. “People are working as a team, less silo-based. It’s a much more planned process. It helps us be more efficient and minimize wasted motion, and it frees up staff to spend as much time as possible with patients.”
Adams said the effort has spawned nothing short of a culture change. “Providers and staff have more time to communicate together, as a team, like physicians years ago. That’s what patients loved, seeing a nurse and provider sitting with them, talking.”
The process also helps reduce anxiety for patients and families, she said, by sharing as much information as possible about what tests, procedures, and treatments are coming up, and when.
“Now we’re all on the same page. Patients are already feeling vulnerable, but now they have more control over their own schedule. We can tell them exactly what time the CT scan is, rather than saying, ‘oh, just wait for the phone call.’”
The hub has also helped C3s and other providers identify backlogs in the system in real time, which makes it easier to prevent them. “In the past, some of this data wouldn’t be available until weeks later, making it difficult to recreate what happened,” Adams explained. “The idea is to get you out safely with good care, and not keep you here any longer than you’d like or we’d like.”
More information — for patients during their stay, and for hospital leaders — is a constant goal, Moen said.
“Especially for patients with no working knowledge of the healthcare system, this gives them a better idea about their condition, and we can take some of the anxiety out of the situation patients find themselves in,” he told BusinessWest. “If we can do that, it’s a major accomplishment. We want to be a navigator for them, along with their primary-care doctor.”

Ahead of the Curve
As he showed BusinessWest around the hub on the hospital’s third floor, Moen called Care Connect “a very important subset of the whole ACO process, where we’re getting patients to the right level of care as soon as possible, and helping them stay well despite the chronic conditions they may have.”
But he admitted Mercy still has much to do — namely, make its zero-defect philosophy a reality through this renewed emphasis on efficient, coordinated care.
“If we’re perfect 99% of the time, that means 1% of patients didn’t get the care they deserve, and that’s not acceptable,” he said. “It’s not easy — medical care is very complicated, and patients are very individualized.”
But modern healthcare is only going to become more complicated, and health systems that have not moved accountable care from a conceptual buzzword to reality — as Mercy has done with Care Connect — will be at a distinct disadvantage in a challenging future.
“A lot of hospitals will have trouble catching up,” Moen said. “We didn’t want to be in that position. We always want to be out ahead of the changes.”

Will in a Box