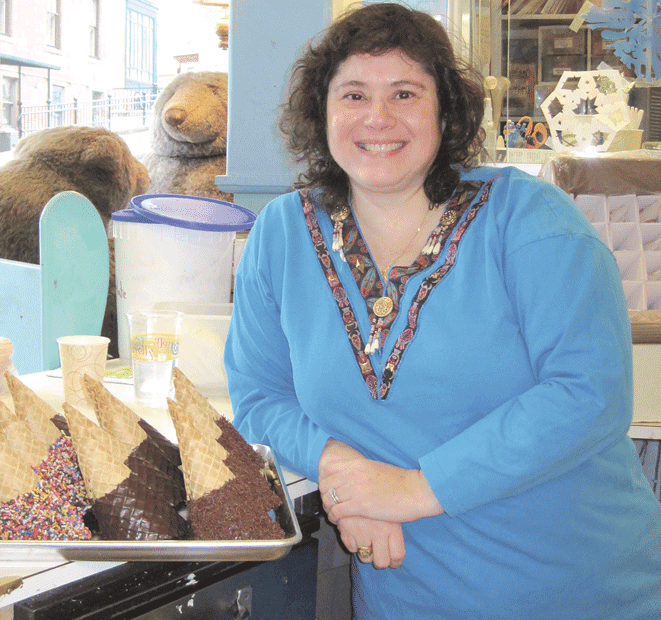 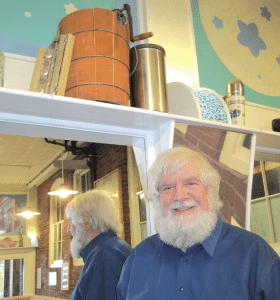 Steve Herrell stands below his original hand-cranked ice-cream freezer, which he used in 1973 to create his sweet innovations.

Steve Herrell has been called many names: Flavor Master, Mr. Mix In, Cone Head, Godfather of American Ice Cream, and Santa Claus, to name a few.

The first four monikers refer to his rise to sweet fame as ‘Steve’ of the original Steve’s Ice Cream in Somerville, Mass. in the mid-1970s (which he sold in 1977), and now as president of Northampton-based Herrell’s Ice Cream, founded in 1980, featuring his ‘Mix-ins,’ which were later trademarked as ‘Smoosh-ins.’

That last name refers to Herrell’s current shock of white hair and beard, which has prompted more than one child in his Thornes Marketplace store to gasp, “look, it’s Santa Claus!”

For now, they’re just trying to keep up with the constant, year-round walk-in business to the Old South Street flagship store that attract what, for more than 30 years, have been called ‘line standers.’

“There are hundreds of them around Boston and this area, and there are now the children of the line standers,” Judy said with pride. “They will say, ‘my parents used to stand in line waiting an hour or more for ice cream.’”

These devotees cite, first and foremost, the quality of more than 220 unique flavors of Herrell’s all-natural, preservative-free, premium ice cream, and other cold treats and toppings. That, combined with Americans’ deep love of ice cream — we eat it pretty much year-round — has helped make Herrell’s increasingly popular and spawned a second location in Huntington, N.Y., in addition to various spots around the region that sell the company’s sweet products.

According to a Mintel Consumer Research report, in 2011, the ice-cream market posted a 4.1% increase from 2010’s retail sales of $10.7 billion, and once all data is considered, was on track for continued growth of another 4% in 2012.

But Herrell’s fame, not as ostentatious as household names like Ben & Jerry and Cold Stone Creamery, has a more modest flavor. Regardless, any ice-cream business today owes it a huge debt of gratitude.

If not for Steve Herrell, there might be no ‘premium’ ice cream (more on this in a bit), and there would be no Cookies and Cream or Heath Bar Crunch ice cream — which he originally called Mix-ins — or other now-common and trademarked concoctions, an effort that the International Dairy Foods Assoc. deems ‘co-branding.’

Sure, maybe someone else would have eventually come up with those industry-impacting innovations, but it was Herrell who did them both first.

For instance, by creating a method to slow down the dasher scoop in the ice-cream freezer, he was able to produce a premium product with a lower amount of aeration than regular ice cream. But it was also his idea to add candy bars, cookies, nuts, and brownie bits to ice cream, which he custom-mixed for each customer on a cold marble slab.

Indeed over the years, this innovator and his ice-cream shops have been featured in Bon Appetit, Newsweek, Time, the Food Network, and TV Diner, to name a few media, and last August, Herrell’s Ice Cream was named one of the ‘10 places you must visit’ by  GQ magazine.

For this issue, BusinessWest got the scoop on Steve Herrell and his intriguing history in the premium ice-cream business and the process that makes it one of America’s favorite treats. 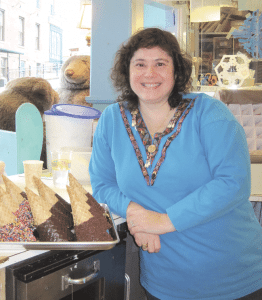 Judy and Steve met in 1980, at the beginning of his second ice-cream career start. They married in 1985, had a daughter, Jessye, and divorced amicably in 2000, all while maintaining their company positions. Steve eventually introduced Judy to Stephan Wurmbrand, who became Judy’s second husband — and the company CFO.

With Wurmbrand’s daughter, Allison, now added to the family, “Thanksgiving is a bit unusual in our house, but it works,” said Judy.

Even with Herrell’s innovations and dedication to the ice-cream craft, he admits he’s not on the cultural level of Ben & Jerry’s. But Ben Cohen and Jerry Greenfield actually visited Herrell in the late 1970s to research their own ideas, which they developed into a nationwide sensation.

“They looked in the ice-cream-making machine and wondered why it was going more slowly than others they’d seen,” Steve recalled. “I don’t think they ever figured it out.”

The Herrells, Cohen, and Greenfield remain friends to this day, while their companies have adopted far different strategies.

“We are not Ben & Jerry’s … our sales are much lower, and they took a different tack,” Judy said. While Herrell’s does not sell to supermarkets, preferring to hand-pack the ice cream at the time of order, she explained, Cohen and Greenfield opened more stores, sold product in commercial grocery chains, and developed quite a few marketing stunts, which helped brand their name. Cohen and Greenfield have also been quite political, at times controversial, while the modest-yet-charismatic Herrell, “has always been more of a ‘home’ kind of guy.”

While driving a cab for a living in Boston, way before the first ice-cream shop, Herrell would have a hot-fudge sundae every day for lunch, “from either Brigham’s or Friendly’s,” said Judy.  “That’s what gave him the impetus to know he could make better ice cream.”

Indeed, every Fourth of July, Herrell’s family would make ice cream in a hand-cranked barrel freezer. Eventually, due to his dairy obsession, he tinkered with the motor of an ice-cream maker freezer and found the right gear-reduction device to incorporate into the mechanics. During the slowed churning process, less air got into the freezing cream, and a higher fat content resulted in a much richer and creamier end result.

The process, now known as ‘low overrun,’ was essentially what food-trade magazines have called the beginning of premium, or gourmet, ice cream.

“Everybody uses it now,” said Judy, adding that, nonetheless, no one has been able to copy exactly what Steve makes. “We know why, but we’re not telling.”

Steve also had an affinity for a certain candy back then. “I thought Heath Bars would go well with ice cream,” Steve smiled. “But in what flavor … coffee, malt, maybe chocolate?”

The answer would turn out to be whatever flavor somebody wanted it to be. It was with this original concept — mixing goodies into his low-overrun processed premium ice cream — that Herrell opened Steve’s Ice Cream in an old dry-cleaner store near Harvard in 1973. After the first day, during which he sold out of all 32 gallons of ice cream, word spread, and the line-stander tradition began.

Burned out with 90-hour weeks at the Somerville location, and envisioning life as a ‘homesteader’ — a person who literally lives off the land — Herrell sold the Steve’s Ice Cream and Mix-ins trademarks in 1977, but not the formulas for the ice cream or hot fudge. He figured he’d need a bit of cash for things here or there, so he learned how to tune pianos.  But homesteading and piano tuning didn’t last long.

“I didn’t think I would miss it,” he recalls.  “But I did. And by that time, I really knew a lot about ice cream.” With the 1977 sale had came a three-year non-compete clause, and, now living in the Western Mass. area, he found an ideal spot in Thornes Marketplace and opened Herrell’s Ice Cream in 1980 — and the rest is sweet history.

How much ice cream has Steve eaten in his lifetime? His response, as he looks up at the hand-cranked ice-cream barrel on display, is a chuckle and the realization that he has no idea. But he bets it’s quite a lot, and while he has to watch his weight these days, most of the tasting is just that — tasting.

Creating five to six flavors a year, Herrell gets an idea and devises a few recipes in small batches. From those he produces between four and 10 different batches before settling on a composition, and he is the final taster. Sometimes, he said, only one or two tries are necessary because he’s gotten so good at knowing what the impact of a certain ingredient is going to have and how it will interplay with other flavors in that batch.

Then the administrative end of the business kicks into gear; that includes familiarizing the staff with the new flavor and making a flavor sign with any explanation necessitated by a play on words.

He typically ends up with four or five ‘experiment sheets,’ and each new flavor gets its own folder, under lock and key.

The number of folders is well over 240, said Judy, including 220 ice cream flavors; a selection of sorbet, sherbet, and ‘no moo,’ or dairy-free, flavors make up the other 20.

Rarely is a flavor removed, except the unusual occasion of a product ingredient coming off the market, like the Twinkie. Not all flavors are available all the time; that wouldn’t be possible since the store product is made on site. Seasonal flavors like Egg Nog during the holidays and Guinness around St. Patrick’s Day always bring more line standers.

Flavor suggestions come via Facebook, e-mails, and line standers, and all are taken into account, but the final say is up to the Herrells themselves: Steve as the final flavor taster, and Judy to gauge overall profitability, which, in the case of cocoa, can be completely unpredictable.

She explained that the base of all Herrell’s chocolate flavors is cocoa. “When I first started making our hot fudge, a bag of cocoa was $75; now that same 50-pound bag is over $200.”

There are only two companies in the world that process the cocoa powder, she told BusinessWest; add in global politics, taxes, and weather, and the result is a cocoa price that is constantly fluctuating.

Judy’s temper also fluctuates at times, most recently due to royalty demands. Facing possible extinction in the 1970s, she explained, Steve’s use of Heath Bars in Mix-ins, increased the candy’s production 27% between 1985 and 1986 alone. But Heath was sold to Hershey’s, and Herrell’s was informed recently that, after 30 years of offering Heath Bar Crunch and other ice-cream flavors using Heath Bars, the use of the name would require a $25,000 royalty fee, per flavor, per year.

“We kind of saved the Heath company,” Judy said with a wry smile. “But, with nine or 10 flavors, it was cost-prohibitive, so we just changed the name to English Toffee Crunch.

“If they push me any harder,” she added jokingly (sort of), “I’m going to use another brand.”

Ice Cream isn’t the only thing on the menu at Herrell’s. All-natural Herrell’s Hot Chocolate is made in small batches and comes in Original, Peppermint, Irish Cream, Mexican, Malted, and Coconut. And the gooey, rich, corn-syrup-free Herrell’s Hot Fudge, which comes in Original, Almond, Coconut, Peppermint, Orange, and Chipotle, is also an award winner, like its premium ice-cream partner.

In August 2011, Judy saw the Herrell’s Hot Fudge jar pictured in a SeriousEats.com taste-test announcement. The publication had purchased various products in Whole Foods and tested them with readers, and Herrell’s won the top spot, said Judy. “What’s interesting about this is who we beat; these are gourmet companies, and that makes it a really big deal.”

A recent coup for the company is the move from the specialty area of the North Atlantic region of Whole Foods, which Herrell’s Hot Fudge has called home for five years, to the general grocery department of all the chain’s stores. This will pit the brand against all the current products in Whole Foods. “It’s another big deal,” she said.

Through Herrell’s Development Corp., Judy oversees the hot-fudge business and franchising, which is by inquiry only until the economy gets better. Meanwhile, the trademarked Steve’s name that was sold more than 35 years ago pops up with different owners who have tried and failed nationally to resurrect Herrell’s initial quality and success; the most recent is a revival in New York City that is “not doing too well.”

Certainly, in Northampton, Huntington, and beyond, Steve Herrell’s got it licked — proving that it’s not what’s in the name, but what’s in the product, that determines the hot hand in the cold arts. 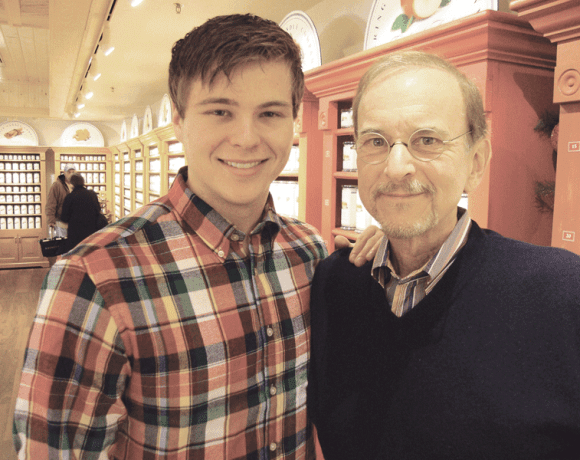