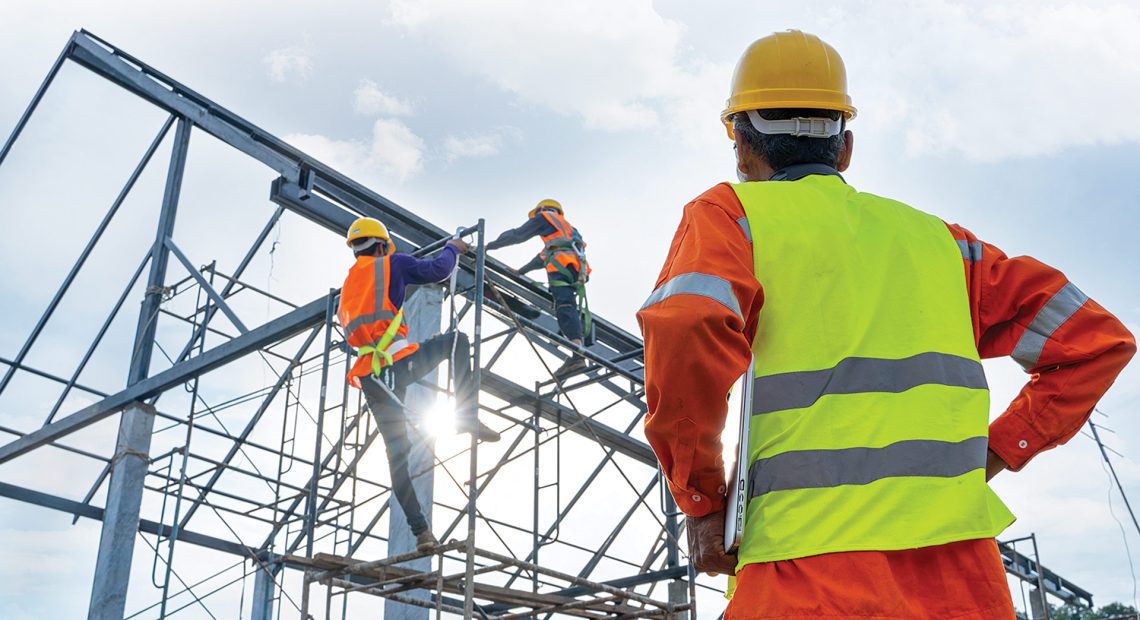 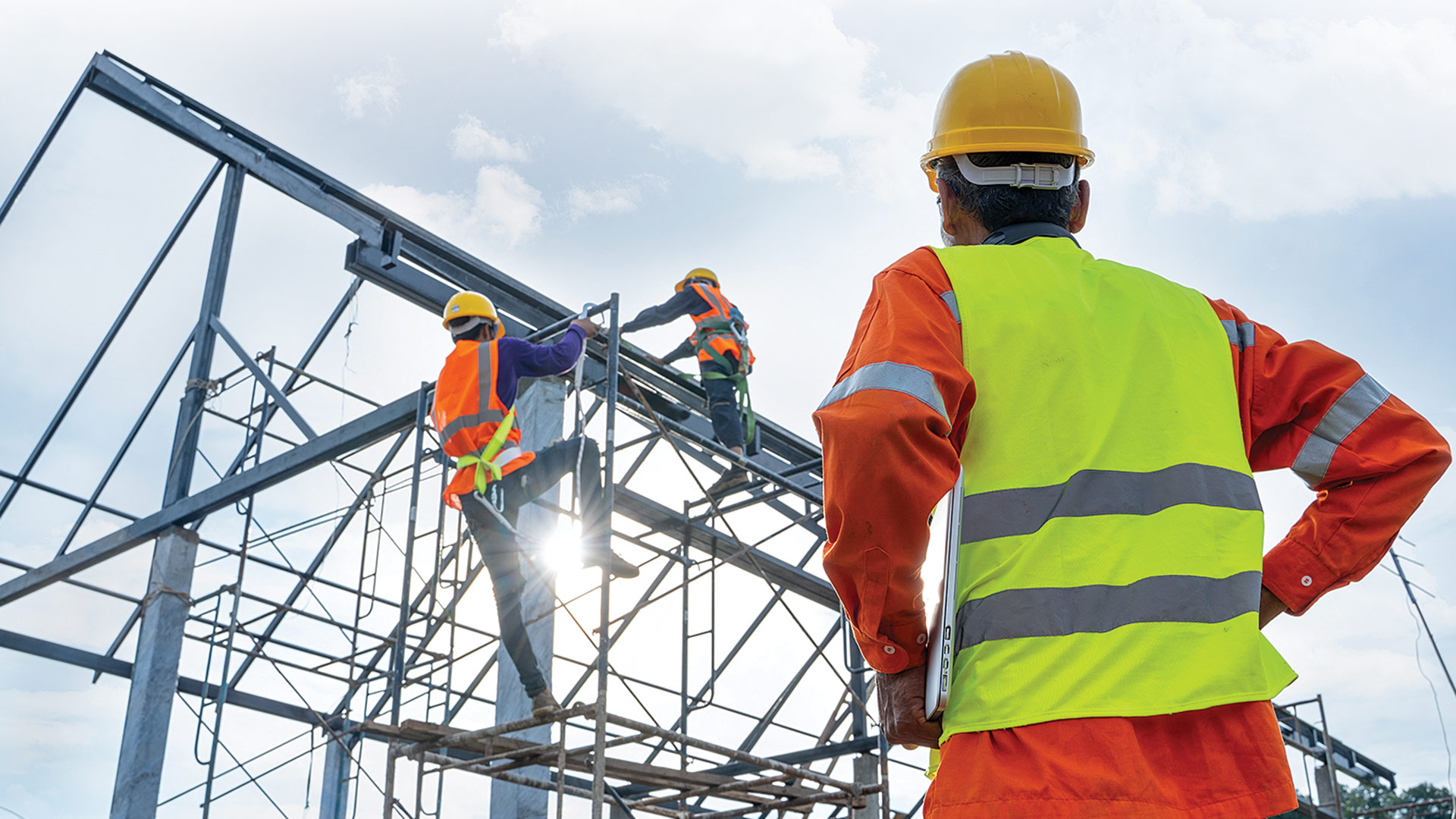 John Raymaakers, operations manager and estimator at J.L. Raymaakers & Sons, says he is happy to have the projects he does to carry him into the fall of 2023.

“In this area, I can’t give a for-sure number of how many people are doing this kind of work,” he said of the civil construction company, which works on projects mostly for cities, the government, commercial and industrial interests, and commercial properties, as well as some private jobs. This type of work includes a lot of underground sewer, drainage, and water.

“Some of these jobs have had to be pushed off for almost a year because it’s just about nine to 12 months to get product in.”

“When we bid on jobs, usually eight to 15 people are bidding on that job,” Raymaakers said. “When you look at things, it’s really not that many companies. Even though there doesn’t seem to be many projects to be done, there is still a lot of work to be done in those projects. Right now, we’re very busy.”

The Westfield-based firm is currently working on a C5 hangar at Westover Air Reserve Base, a cannabis dispensary in the Whip City, and several pump stations. The company also has a few emergency contracts with the city of Westfield in case of emergencies.

Just like J.L. Raymaakers, many construction businesses are surviving in the current economic state. Sweitzer Construction, based in Monson, has been filling its backlog with projects going into 2023. 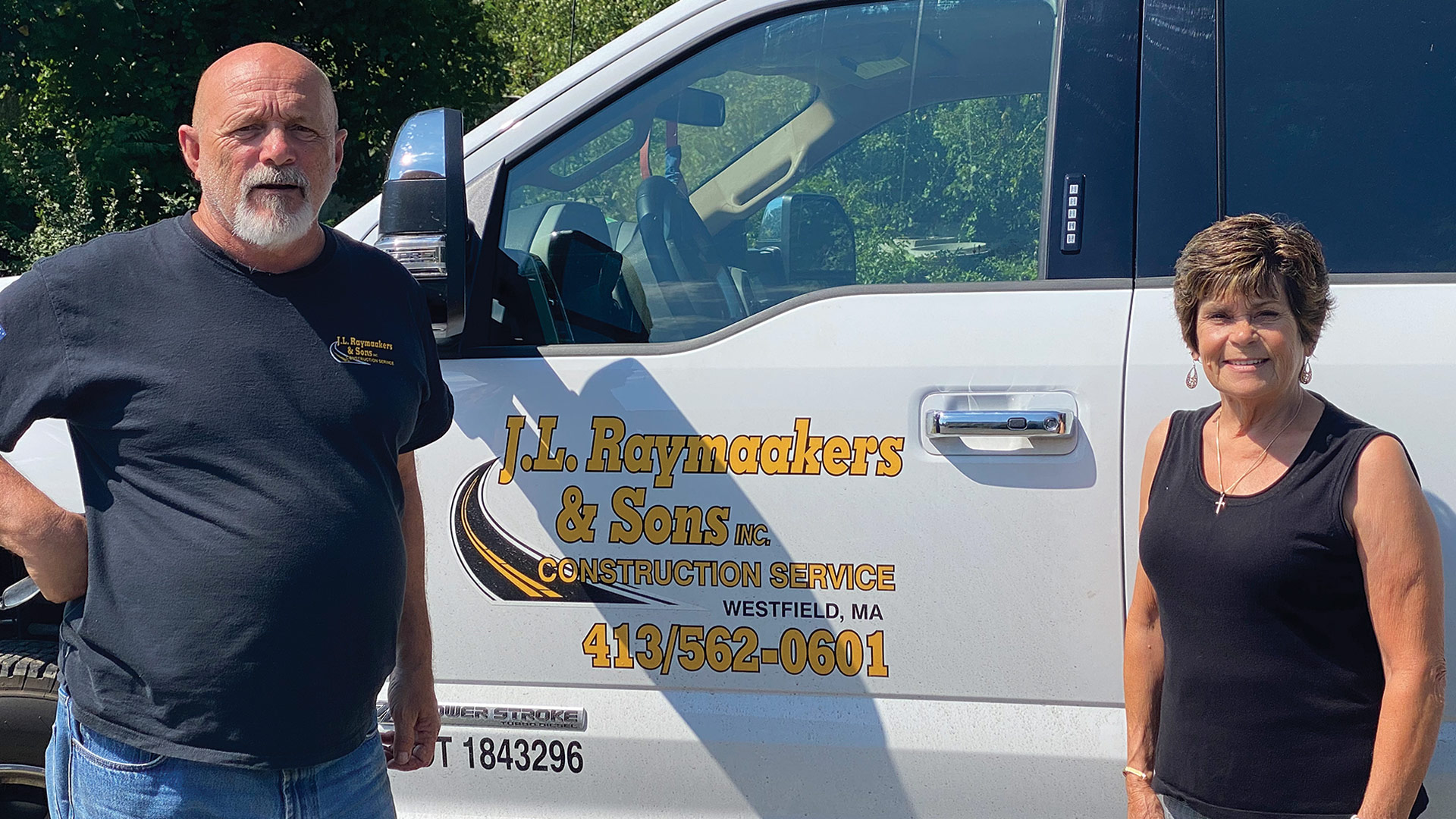 John and Laurie Raymaakers say there’s an understanding between contractors and clients when it comes to supply-chain issues because everyone is dealing with them.

The family construction business specializes in work ranging from zoning and permitting for customers to acquiring sites for them to find, as well as helping customers secure financing. Its projects range in geographic location from Greenfield to Springfield; from Southwick to Lenox. Over the summer, it worked on projects in a number of its specialties, including medical, dental, high-tech, education, and cannabis facilities.

“We have a multi-year high-tech customer, IMI Adaptas, in Palmer Industrial Park,” explained Craig Sweitzer, general manager of Sweitzer Construction. “We’ve done six buildings for them, and again, it’s all high-tech manufacturing, from clean rooms to research and development to mass spectrometry labs.”

Springfield-based Gagliarducci Construction has been working on a multitude of projects this summer also. Projects range from site work in Springfield and Amherst and road work in Easthampton and Northampton to the Newman Catholic Center at UMass Amherst and the new Aliki Perroti & Seth Frank Lyceum building at Amherst College.

“Some of these jobs have had to be pushed off for almost a year because it’s just about nine to 12 months to get product in.”

Jerry Gagliarducci, the firm’s president, said he’s got “a lot of stuff going on at Amherst College and UMass.”

Tim Pelletier, president of Raymond R. Houle Construction in Ludlow, said his business performs commercial and industrial construction, primarily working on medical facilities in the Western Mass. area. The firm has been busy this summer, “renovating said medical facilities and a few other private projects on the outside, but still medical-related.”

The Price for Projects

Despite the constant work at many area firms, supply-chain issues and inflation have taken a toll on productivity.

Raymaakers told BusinessWest that a lot of his projects have gotten pushed back almost a year because products aren’t coming in on time.

“We’ve been told that some of our sewer pump stations that need electrical components won’t be in until June of next year,” he said. “Some of these jobs have had to be pushed off for almost a year because it’s just about nine to 12 months to get product in.”

Sweitzer had a similar story to tell. He explained that some electrical equipment needed for jobs can take up to 40 months to come in. Basic water pipes, such as the Delta Liner pipe, are also among the hottest items waiting to be delivered. 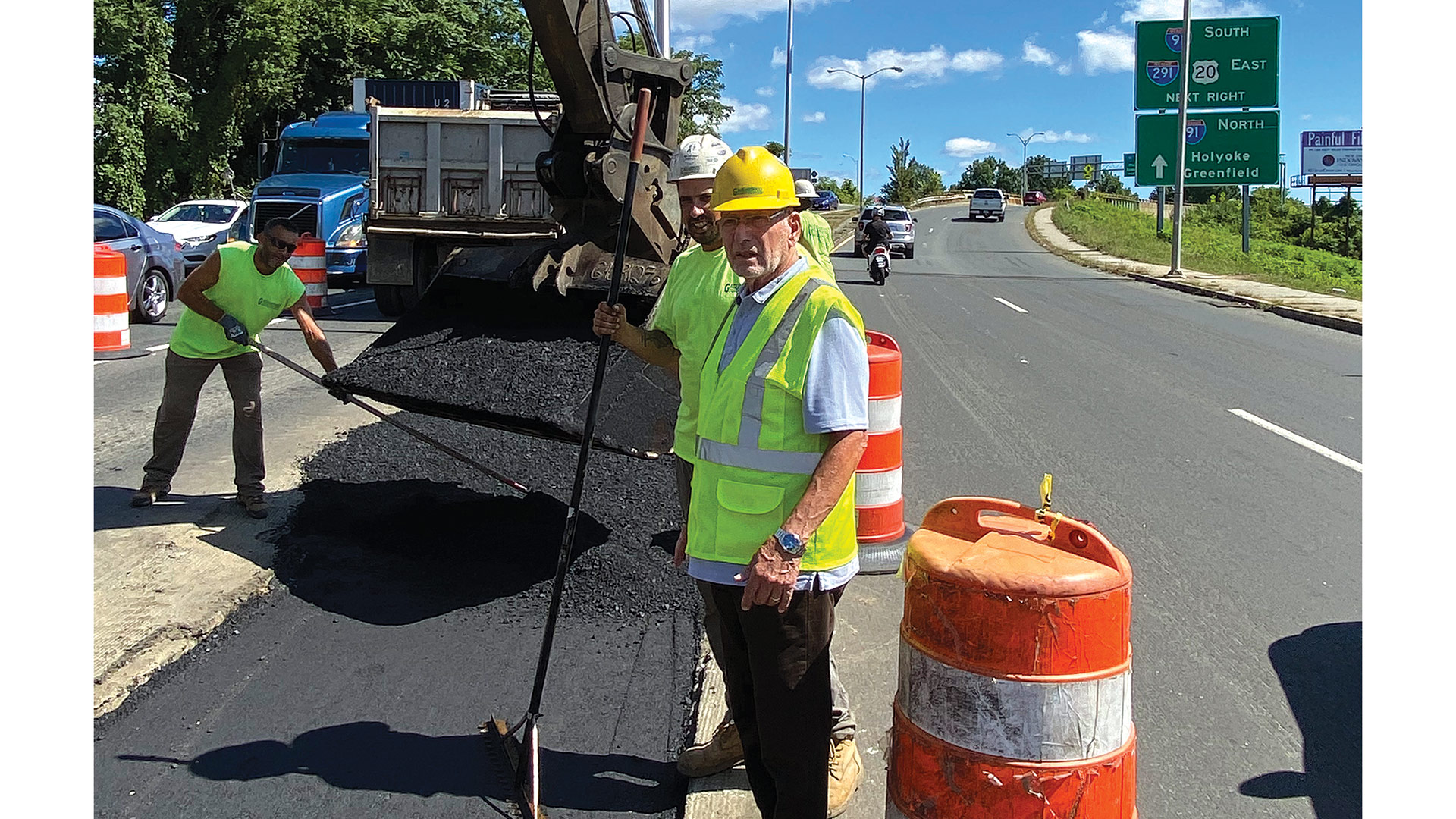 Jerry Gagliarducci says he may be looking for help, but the help he has now is “excellent.”

Gagliarducci said he must be “very diligent” when it comes to ordering products ahead of time. The hope is to order products now, so there can be some sort of possibility of seeing it before spring.”

Pelletier agreed. “Most supply-chain issues were definitely a concern, but knowing what products take longer to get and approximately how long it’ll take to get it, I planned accordingly so I could meet the timelines we promised to our customers,” he said. “It’s just a matter of reorganizing our planning process so that we can acquire the materials needed when we need them.”

Supply-chain issues aren’t the only thing putting a halt on production; the rising price of fuels and materials is causing companies to account for it in their estimates. Gagliarducci said that he must be very cautious of where he buys from and what he buys, and he has to be careful to not let machines idle for too long.

Raymaakers agreed. He explained that one of the downfalls of city and state work is that it doesn’t follow the escalator clause. If the price of something increases or decreases more or less than 5%, the price is adjusted. A lot of contracts, such as diesel fuel and concrete, run with an escalator clause.

“We’ll be looking more into the public sector for roadwork and things like that. There seems to be a big push for infrastructure money — water, sewer, and new roads, that kind of thing.”

“This is what it was at when you bid it, but if it goes up or down, this is what you get,” he said. “But a lot of these contracts won’t allow it, so it does hurt us on our end of it. The change in prices this year is really tough.”

Even though prices look to be staying where they are for the moment, construction companies are planning ahead to hopefully get themselves started earlier. All the contractors who that talked to BusinessWest mentioned bidding on projects way ahead of the starting timeframe.

“Taking a vacant lot and bringing it back to life in the city is an exciting project for us,” said Pat Sweitzer, partner at Sweitzer Construction. “One of the projects that we are looking forward to is breaking ground on a dispensary on Boston Road in Springfield.”

She went on to say it’s a real privilege to be part of revamping old mills in Holyoke and Hardwick; “it’s an exciting project, but it’s going to take a lot of hard work.”

Raymaakers said one of his firm’s next projects is going to be at the airport in Garner, as well as four to five pump stations. About five crews are currently out in the field, allowing the company to work on different jobs at once.

Gagliarducci is planning to branch out this upcoming season in the public sector. 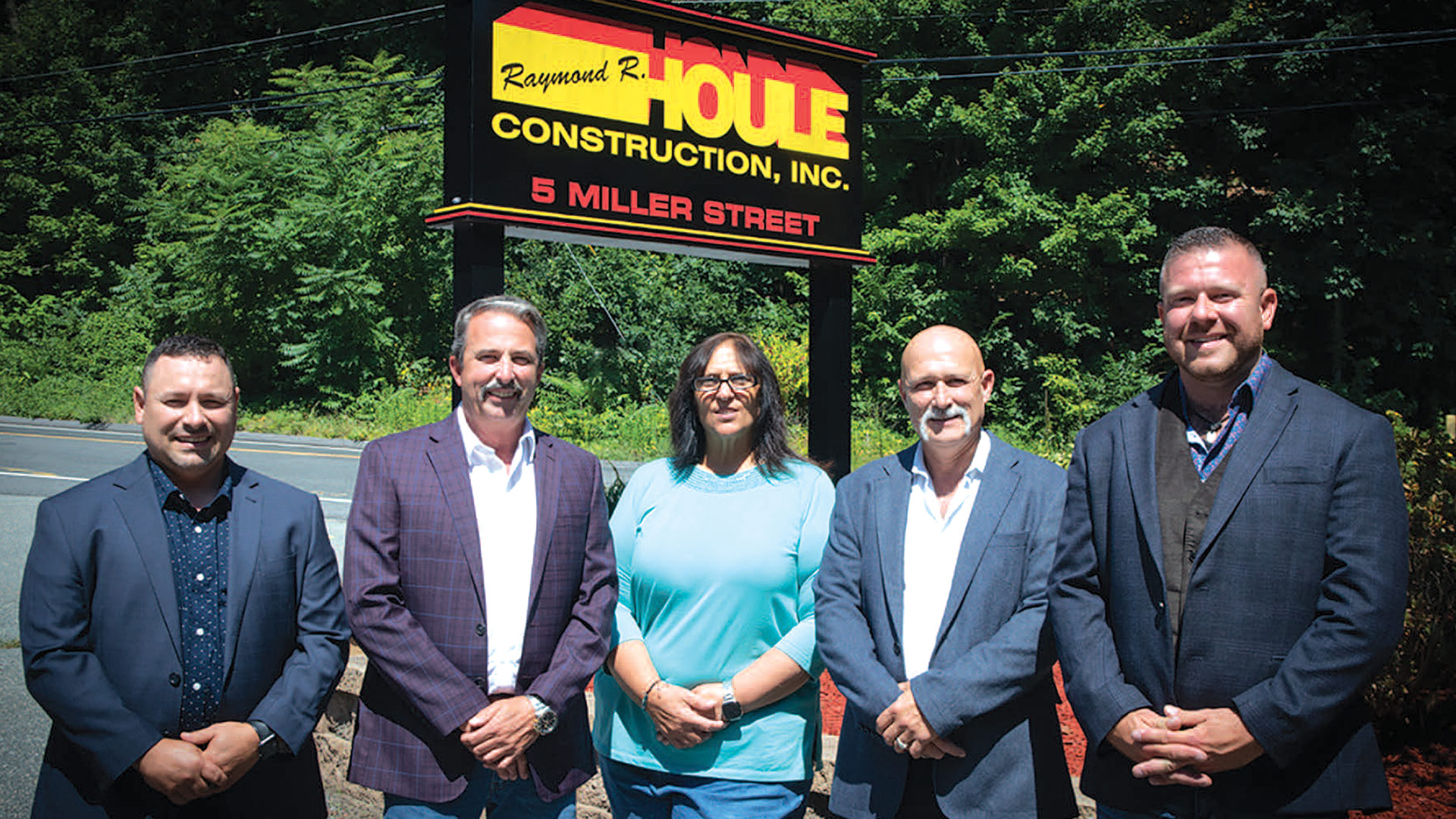 Tim Pelletier (fourth from left, with some of his team) says he’s had to plan around expected supply-chain issues to meet customer timetables.

“There’s not as many projects, and we’ve done a lot of site work on schools in the past dozen years — it doesn’t seem like many schools are being planned and coming out for bid this coming season,” he told BusinessWest. “We’ll be looking more into the public sector for roadwork and things like that. There seems to be a big push for infrastructure money — water, sewer, and new roads, that kind of thing.”

Even though the past year has been tricky, construction employers are feeling fortunate to have dedicated employees by their side. With a lot of work to be done in the construction sector, new employees are hard to come by, but Raymaakers is proud to have new trainees on his team.

“We’ve taken in a few employees that are just raw to this field. They’re learning, and it’s good for us in the future to have younger people. We are very lucky because the employees we have are very dedicated to us and very knowledgeable. They’re fantastic workers.”

It’s clear that the challenges that have beset construction over the past couple of years aren’t going away any time soon. But as the summer construction season comes to a close, area companies see enough positive signs — and have enough work in the pipeline — to feel good heading into 2023.

BusinessTalk with with Jeff Daley, president and CEO of Westmass Area Development Corp.