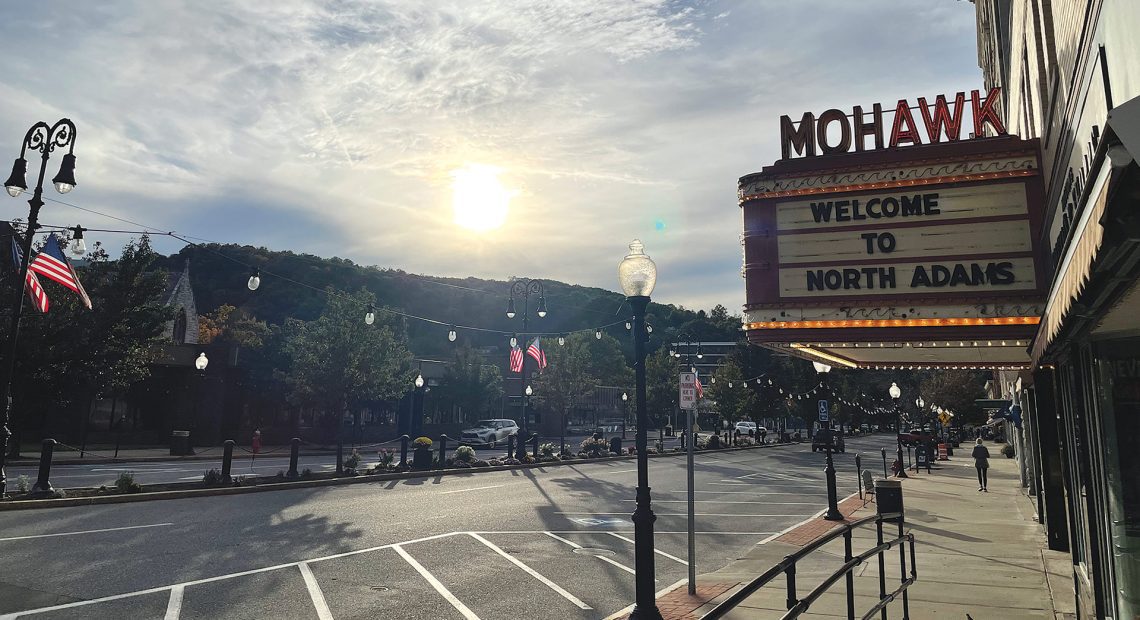 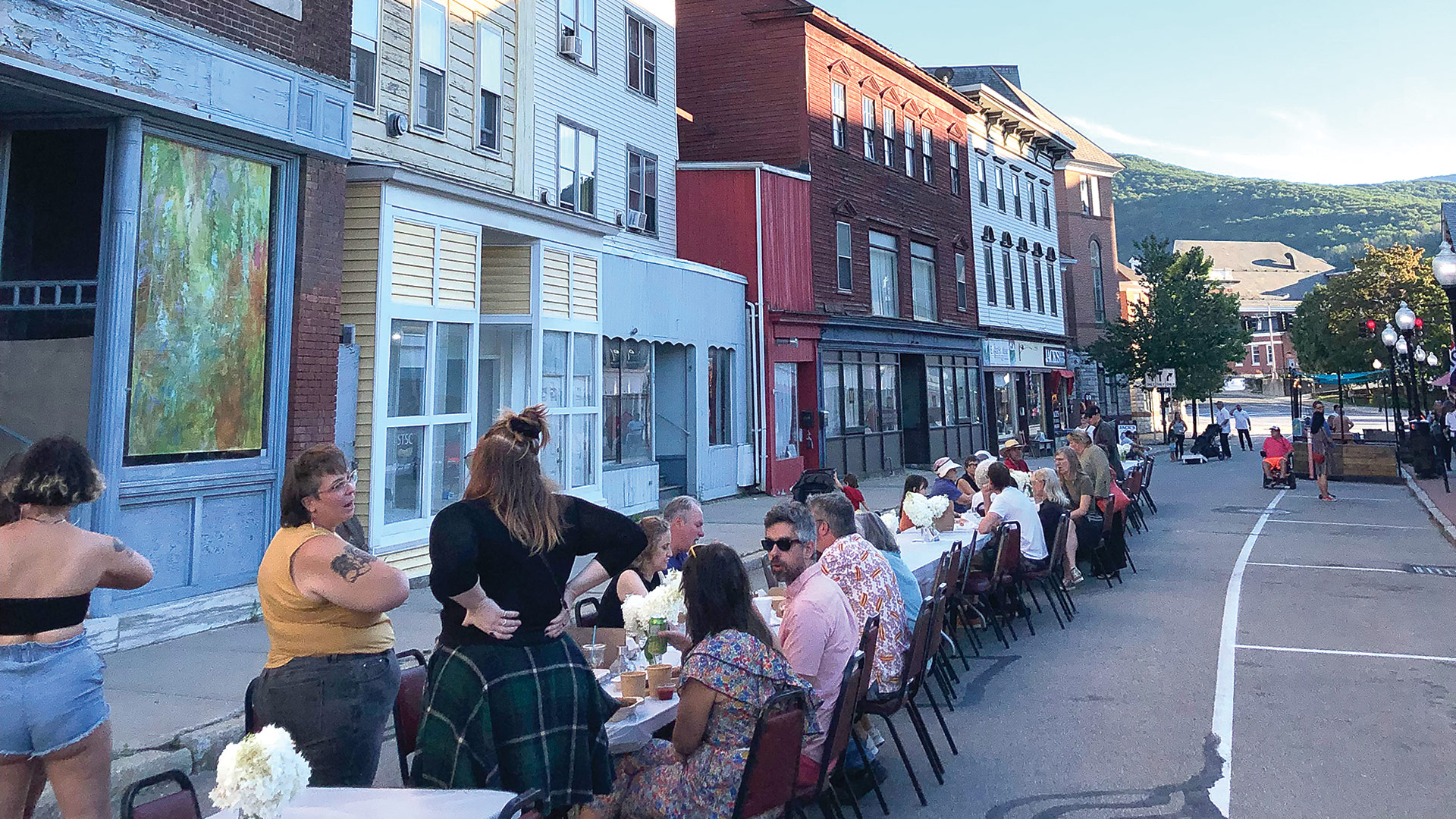 Anna Farrington says First Fridays are bringing out lots of locals, as she had hoped.
Photo by Ben Lamb

In a small city like North Adams, Ben Lamb says, economic growth is easy to see.

“Historically speaking, there’s always been a smattering of small businesses downtown, and we’ve seen that number grow; I believe there were at least six or seven small businesses that opened downtown over the last year,” said Lamb, director of Economic Development at 1Berkshire. “Some of those are growing even at this point; they’re expanding.”

In the past two years, small niche businesses have been moving into a downtown area where Lamb thinks people are looking for more than just a transaction; they’re looking for an experience.

The Plant Connector is a good great example of a shop that started very small on Eagle Street and, within the period of the pandemic, “scaled up fivefold from one footprint to another” because business was so strong, he noted.

However, while business has been strong, Nico Dery, Business Development director for the North Adams Chamber of Commerce, noted that there seems to have been less tourism this summer than in recent summers, with the possible exception of festival weekends.

“It’s all kind of speculation why that could be, but I do think that a part of it is the lift on COVID restrictions,” she explained. “People aren’t traveling as close to home as they would be. So we’re losing some of those tourists from Boston or New York who might be going abroad or somewhere else within the country rather than making the short trip over to the Berkshires.”

Lamb agreed. “That’s where the downtown small-business community can rise to the occasion,” he said, adding that business that can identify opportunities can make a workable business model out of a fairly niche opportunity.

In 2015, Lamb founded the NAMAZING Initiative, a community-based organization focused on increasing the lovability of North Adams through creative placemaking in an effort to drive organic economic development. Through the effort, he and his team created points of excitement and attraction to get people to invest and look at what they could do in downtown North Adams.

“Now it’s the businesses themselves that are self-propelling,” he said. “If you see a cool business and then you see a vacant storefront next door, you want to be in that space next door to them.” 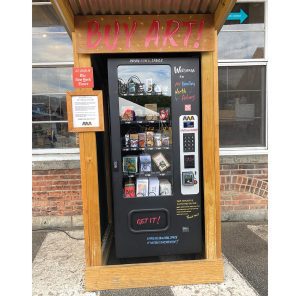 Jenny Wright says the vending machine at MASS MoCA has brought joy to not only the artists, but visitors too.

With the help of 1Berkshire, NAMAZING was able to directly invest and help set up pop-up shops to help small, niche businesses have a space on their own until they could hit the ground running.

For example, Walla-Sauce and Conscientious Cloth, two young businesses, are co-sharing a common space. Lamb explained that, with the resources provided to start up an operation for a three-month stint, they were able to extend their lease past the three months because they’re seeing enough business and revenue to do that.

“The First Fridays program that’s been going on over the summer — that’s spearheaded by two downtown property and business owners that wanted to see that sort of activity on a monthly business — really catalyzed something exciting over the past year,” he added. “And when you look at all of those opportunities, it also draws more attention to downtown.”

Last spring, Farrington thought there was something missing downtown after the end of Down Street Art, hosted by MCLA; street art was starting to draw crowds at this time. Other communities like Pittsfield, Brattleboro, and Boston had a First Friday events program in place and had a lot of positive feedback. She then went business to business downtown and asked if and how they might participate in the First Friday events. Unanimously, the response was “yes, let’s do it.”

“First Fridays is a grassroots initiative; that means businesses participate at a level in which they’re comfortable,” Farrington told BusinessWest. “And the gallery [Installation Space] has been instrumental in helping to organize some of the First Friday events.”

Installation Space was opened five years ago to provide a space for installation artists where they could show their work without the pressures of a typical art gallery, where artists are expected to make sales and the gallery would then make commissions.

“It’s one thing to just point a global audience in the general direction of Main Street and send them on their way; it’s another thing altogether to be a full partner and develop a shared vision for what they encounter once they get there.”

There are typically up to four or five shows over the course of the year. Each show will have an opening reception that also takes place on First Fridays; “it’s a way to sort of maximize that appeal to people to come down to First Fridays,” Farrington said.

The gallery has been instrumental in helping to organize some of the First Friday events, drawing in artists, artisans, and locals. The inaugural First Friday event was held in August; a block party on the street featuring live music and games drew a successful turnout.

In September, Farrington and her team held a community picnic where a 100-foot-long dinner table was set up, thanks to the American Legion. Locals were asked to bring their takeout or picnics and come down and have dinner on the street together.

“It was very successful. I’m looking forward to doing that again next year,” said Farrington, who, at the time she spoke with BusinessWest, was planning the October First Friday event on Oct. 7, an Eagle Street night market. “We’ll be having 20 vendors on the street, including the Berkshire Cider Project.”

With the creative-economy surge in downtown North Adams, the First Friday events aren’t the only place local artists and artisans are able to share their work in more creative ways. Jenny Wright, director of Strategic Communications & Advancement at the Massachusetts Museum of Contemporary Art (MASS MoCA), emphasized that they’re not just artists; “they are savvy entrepreneurs who understand the risk of starting a business during a pandemic” — and the risk is paying off.

For example, an artists’ collective repurposed a vending machine to sell art on MASS MoCA’s campus, which also promotes the local businesses that created the art. But that isn’t the only thing the museum is doing to help stimulate the new creative economy surge.

“It’s interesting because, in every strategic plan I think MASS MoCA has ever been involved with, there’s been a priority of making sure that patrons that visit MASS MoCA also visit downtown,” Wright said. “It’s one thing to just point a global audience in the general direction of Main Street and send them on their way; it’s another thing altogether to be a full partner and develop a shared vision for what they encounter once they get there.”

Historically, the city of North Adams has struggled physically and psychologically because of the overpass dividing MASS MoCA and the creative downtown. Even though the environment is improving, it is still an ongoing struggle to get people off the gallery’s campus.

In 2018, the North Adams Exchange was a research study, a collaboration between the city of North Adams, the downtown business community, the NAMAZING Initiative, and MASS MoCA to go into the city and determine how to create tactical and tangible ways of pulling people from the museum into downtown. 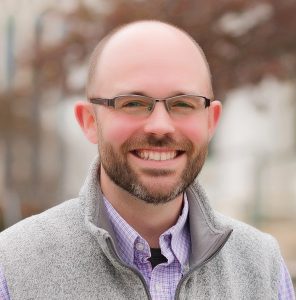 Because of the pandemic, Ben Lamb says, more dollars are being spent locally.
Photo by Tricia McCormack

The organizations created a pop-up space that was like an indoor park, with yard games, activities for kids, and a stage for music events. There was also a pop-up business that sold an array of North Adams-made items from artists and others. The initial pop-up park is where MASS MoCA then invested “a not-so-insignificant amount of money and resources” to make Big Bling Park, Wright said.

“That was like a great litmus test to see what can be done to actually pull those people in,” Lamb said. “MASS MoCA is really trying things, novel approaches, and seeing what sticks. I think having them there as a creative partner is really important because they’re used to that process that happens in the arts. And when you can apply that to planning and movement through a city, you can get some really interesting results.”

The museum’s new director, Kristy Edmunds, has made it her priority to really get to know the community, its people, and individual businesses, Wright added.

One event she hopes will spark more momentum is the museum’s annual gala, historically held in New York, which is moving back to North Adams. The museum is hosting the gala to coincide with the opening of E.J. Hill’s exhibition, Break Run Helix, in Building 5.

“I really think MASS MoCA has an opportunity to help as a catalyst for these creative businesses and in the creative economy of North Adams by partnering with the city, bringing in artists and creative producers from other parts of the country or other parts of the world, to partner with some of these local business that are starting,” Wright said. “That’s where I see our value moving forward.”

North Adams is ready to take this momentum and run with it. MASS MoCA will continue to hold live events throughout the year, from performances by national touring bands like Soccer Mommy to a roundtable with mixed-media artist Rose B. Simpson.

Dery added that retail shops and restaurants in town will congregate to see how the city can drum up business. One idea to reactivate the storefronts downtown is to decorate them with Christmas lights so people can enjoy dressed-up windows for the holiday season.

“I’m also excited, if the businesses are on board with this, to continue our Plaid Friday initiative and Plaid-urday, which is a grassroots initiative,” she said. “Instead of shopping in big-box stores or online for Black Friday, you spend your money in your community, so it stays local.”

Lamb explained that, because of the pandemic and locals working remotely, those dollars were brought back to the community and stayed there versus going to the city where the person was working. Even though people have built habits around the small businesses close to home, there is still a balancing act that every business needs to figure out for themselves in terms of what their customer base is.

Taking Stock of the Future

Businesses are prepared for things to slow down for the winter, but they still need to have a critical customer base, so they try to connect with the local community in whatever ways they can to garner support.

“Maybe that’s around pricing, maybe that’s around what they’re offering, doing special gift-card options. It’s really figuring out what is the thing that you can offer to the local market that is going to keep your doors open during the slow times,” Lamb said. “The businesses that take the time to do an analysis on sales and where their customers are coming from, and what those customers are buying, are the most informed and, therefore, the most able to pivot seasonally to fit the market. We’re seeing more businesses that are conscientious of that; they track metrics very intentionally and are planning that before even opening their doors.”

Meanwhile, he and other business leaders are pleased that North Adams is growing — and its creative economy booming — with the help of local partners taking the initiative to make the city a more attractive location for locals and tourists alike. 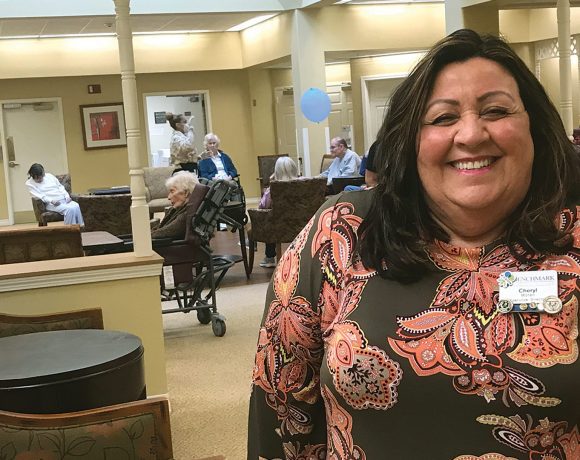 Activities Are a Critical Element of Life in Senior Communities