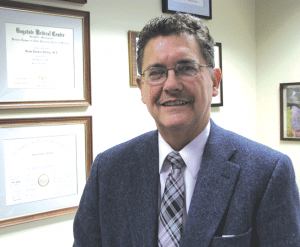 Dr. Kevin Hinchey says a shortage of primary-care doctors is partly driven by a gap in pay and prestige compared to many specialists — but those factors may be improving.

It’s a story of opposing trends colliding across the healthcare landscape.
For example, on one hand, the population is aging rapidly; on the other, medical costs (notoriously high for senior citizens) are soaring. On one hand, the Affordable Care Act is attempting to add tens of millions of Americans to health-insurance rolls; on the other, persistent physician shortages, particularly in primary care, have threatened access to care even for individuals who already have insurance. Meanwhile, hospitals are being asked to provide better care for less money, making efficiency more than a buzzword.
What does this mean for patients? Lynn Ostrowski thinks they need to start managing their care long before they ever have to see a doctor.
“If we want to curb the cost of healthcare in this country, people have to take control, or accountability, over their own health,” said Ostrowski, director of brand and corporate relations at Health New England. “Seventy percent of chronic conditions are the direct result of people’s own life choices — some experts say as high as 90%. It’s probably somewhere in between, depending on the individual.”
There are plenty of good health reasons for emphasizing preventive wellness, but there are also practical reasons to keep people away from the doctor. Specifically, there aren’t enough doctors.
According to an annual workforce study conducted by the Mass. Medical Society, while several types of specialists have been in short supply in the Commonwealth in recent years — among them psychiatry, dermatology, general surgery, neurology, and urology — family and internal medicine pose the most severe access problems, with shortages reported for eight consecutive years.
“Primary care is still the big area of concern,” said Dr. Kevin Hinchey, chief academic officer at Baystate Medical Center, adding that, while the teaching hospital has ramped up efforts to attract people into primary care, the pay and prestige that go along with the discipline continue to lag behind other specialties — a definite consideration for graduates leaving medical school with heavy indebtedness.
“When you look at per-capita doctor-to-person ratio in this country, we’re, I believe, 23rd or 24th; we just don’t have as many doctors per capita as other countries do,” he said. “And I know we don’t have as many primary-care doctors as some others.”
The stress and burnout of managing a practice — primary care in particular — are factors as well, writes Dr. Steve Adelman, director of Physician Health Services for the Mass. Medical Society (MMS), on the agency’s blog. “The practice of medicine these days is inherently stressful. The so-called healthcare system is more complex than ever, and the practice lives of most physicians are replete with all manner of acute and chronic stress.
“We are victims of our own success,” he adds. “As life expectancy increases in the face of more and more administrative overload, reimbursements are decreasing. The art and craft of medical practice are gradually giving way to an industrial model of care that runs against the grain of many of our best and brightest. Our profession is in the midst of a painful transition, and legions of physicians feel as though they are wandering in the desert, with no view of the promised land in sight.”
All of this could pose significant changes in the way patients receive care, and how much treatment they may access. For this issue’s focus on the future of healthcare, BusinessWest takes a look forward into this challenging new world.

Crisis Management
Hinchey said the issues of pay and professional respect in the primary-care world have improved slightly, but the problem of shortages extends into other areas as well.
“There has been an acknowledgement from all quarters that there will be a doctor shortage, so the medical schools have been asked to increase the size of their classes, and that has happened,” he said. “The problem is, after graduating from medical school, the training slots have not increased.”
As a result, he said, over the next three to five years, the international graduates who train in the U.S. and set up practices here, many in underserved areas, won’t stay here because they’ll be pushed out by U.S. graduates, and that displacement will do nothing to solve the doctor shortage. Meanwhile, the federal government has been decreasing funding for medical education.
“We seem to do better in crisis management, unfortunately,” Hinchey said, “so when this gets close to a crisis, I think it will be better addressed.”
A doctor shortage — at a time when Americans are living longer and more of them are receiving insurance coverage — could have several effects, writes Dr. Ronald Dunlap, president of the Mass. Medical Society, on the MMS blog.
One is a rise in retail clinics, many run by nurse practitioners (NPs), which are expanding beyond basic services into activities like lab services and managing chronic diseases.
“Research shows that patients like the convenience of retail clinics, particularly when they have difficulty getting to their primary-care provider,” Dunlap notes. “Given the limited resources and no on-site physicians, most patients may not regard them, at least for now, as a place for primary care. As they add more sites, services, alliances, and advertising, however, they are likely to play a bigger role in healthcare.”
However the idea that NPs can fill the physician gap falls short, because nursing shortages exist, too. A large percentage of nurses are expected to age out of the workforce soon, and nursing schools are having trouble recruiting faculty to train a new generation.
“Further, with an emphasis on cost containment, replacing high-salaried providers (physicians) with lower ones (NPs) with less training will likely not result in savings,” Dunlap argues. “We have seen that less-experienced providers tend to order more tests and procedures, raising costs. Cost control will result best from the team approach of coordinating care and avoiding unnecessary referrals, testing, and procedures.”
He added that a rise in NPs, who tend to work in urban settings, won’t ease the shortfall in rural environments and other underserved areas. Doctors also tend to flock to cities, Hinchey noted, but he said telemedicine might become a significant part of the solution in the coming decade.
“There is some of this telemedicine going on now. But what if you could actually Skype your doctor? He or she gets a look at you, gets your blood pressure through a USB port, gets some other data from you. You don’t have to go to the office when you feel miserable,” he told BusinessWest. “Is that technology coming? I think yes. And I think that would be a a benefit, and a lot of patients would like that. That could increase capacity. And if I’m sick and I want to be seen, I could be seen.
“For some aspects of what we do, the laying on of hands will never be replaced,” he continued, referring to trips to the doctor’s office. “For many issues, from an urgent-care perspective, I’m going to want to be seen. But I just think we can be a lot more creative about this.”

To Your Health
Much of that creativity will come on the preventive-health side, Ostrowski said, which is why Health New England has long promoted wellness initiatives in the workplace.
“Most people consume most of their calories at work, during the work day,” she told BusinessWest. They get to work and get coffee or breakfast, then a mid-morning treat, they eat lunch at their desk, then have a mid-afternoon snack. For many people, work is also the time when they’re the least active because they’re at a computer at their desk or sitting at the conference-room table.
“So we believe the workplace has a really unique position in assisting with creating healthy employees and families, and employers have a unique interest in that because they’re bearing the burden of healthcare costs for that population in many ways — they pay for insurance for employees and families, and they also lose productivity to sickness or disability. So it’s extremely important to have a culture of health, so to speak, and engage people throughout the day in healthy behavior and healthy activities.”
Through its Healthy Directions program, Health New England engages with companies through an assessment process, including health screenings and lifestyle-focused interviews, then helps employees set goals for healthier habits. “We’re concerned with small steps, not everything at one time. Most people won’t be a success if they try to do it all.”
For instance, HNE promotes a graduated ‘jump start’ concept to better health; participants are encouraged to increase their water intake the first week, walk 10,000 steps a day the second week, eat five servings of fruits and vegetables per day for the third week, then bring it all together in week four.
“It’s reinforcing healthy lifestyle habits, and hopefully some of it will stick,” Ostrowski said. “You spend eight hours of each day at work, so if you have a supportive health culture in the workplace, odds are your health will improve. That’s really the basis our program.”
A parallel trend in health insurance, she said, is a shift toward high-deductible health plans, which tend to work best for people who take preventive wellness seriously. “The healthier you are, the more appealing that is, because there’s less out-of-pocket expense from the monthly premium. If you couple that with health savings accounts, it’s a great benefit. But if you’re not healthy, that’s a difficult plan to manage.”
The full impact of the Affordable Care Act on the medical and insurance landscape has yet to be felt, but Hinchey expects changes in the way providers are paid as it relates to the ‘medical home’ concept, also known as accountable care, by which a team of providers — doctors, nurses, specialists, therapists, etc. ­— share in the treatment of a patient and also share in the reimbursement.
“People are starting to think in terms of a medical home,” he said. “What if I had a nutritionist? I don’t have diabetes or high blood pressure, but I’m a little bit overweight; can I talk to a nutritionist about it? Or maybe someone for exercise, or other things that could help me be a little bit healthier, that are not presently covered by insurance.”
Dunlap maintains that physician satisfaction with the profession — not necessarily the administrative stresses — remains high, especially as they grow comfortable with such innovations. “More physicians are becoming familiar with reform initiatives, such as global payments and accountable-care organizations, and more physicians indicated they are likely to move to global payments to reduce healthcare costs.”

Bridging the Gap
Hinchey said there’s a long way to go to rectify the conflict between cost and access, but it might take a “quasi-crisis” or two to really move the needle.
“We have to be creative to meet these needs,” he said, referring again to the promise of telemedicine versus the barriers posed by the current reimbursement structure. “I can Skype at people if I want to, or spend 100% of my time talking to people on the phone, but if I only got paid for when they come into my office, I wouldn’t last very long.
“But as payment reform starts to come around,” he added, “it will cause kind of a domino effect. None of these things happen in isolation.”
Clearly, the future is still being written.