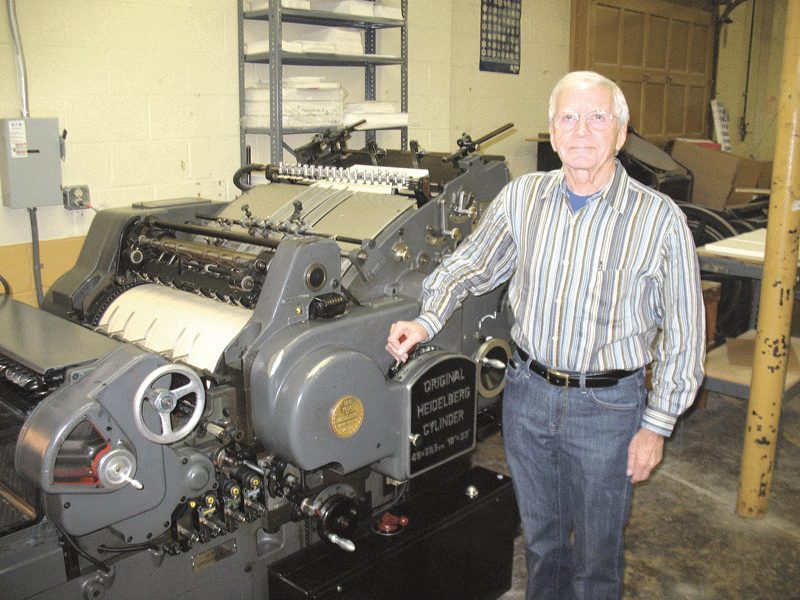 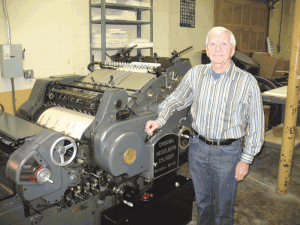 Guy Gaulin has spent a lifetime sharing his passion for letterpress.

Guy Gaulin started his career in printing as a letterpress assistant more than 60 years ago. He never lost his passion for that craft — even when most of the industry left it behind.
“In the ’50s, offset printing and computerized typesetting came along, and that had some advantages over letterpress. It costs less, and you can do more with offset in the way of color process,” Gaulin told BusinessWest. “So letterpress became practically obsolete.”
But not at Holyoke-based Hitchcock Press, which was well-known for letterpress printing from its earliest days as the Wisly Company in the late 19th century, and still touts itself as a leading purveyor of the craft in the Pioneer Valley.
“This is what I’ve always wanted to do,” Gaulin said. “I liked letterpress, and it does have its place. It was my background, and I was good at it. Because offset was a lot less expensive, letterpress just got rolled over, but you did have some folks who stuck to letterpress, basically for things like limited-edition books and cards. The people doing letterpress were mainly one- and two-man shops. But for them, it was a passion. I put myself in that group.”
But he has grown Hitchcock Press to much more than that since purchasing it in 1971. The shop employs about 15 people, and commercial offset work remains the major revenue generator, allowing Gaulin to cultivate his letterpress passion for a smaller — but growing — number of clients who appreciate the artistry of the method, whether it’s for wedding invitations, business cards, letterhead, or any number of other uses.
“Commercial offset is really the core of our business, but the focus of the business is letterpress,” said Deanna Gaulin, Guy’s daughter and the shop’s vice president. “What I like about letterpress is that it’s something we can offer that other area printers do not. It’s definitely the fastest-growing area of our business, too.”
Despite its expense compared to offset printing, “our volume is increasing on letterpress,” Guy said, “which is the part I enjoy most.”

Coming Home
Gaulin was born in Holyoke to Canadian parents; when the Great Depression deepened in the 1930s, they returned to Quebec. While attending school there, he discovered a passion and aptitude for art which would continue throughout his life.
In 1944, he returned to Holyoke and joined the U.S. Navy shortly thereafter. Following the service, he began his graphic-arts career at American Pad and Paper Co., completing his letterpress apprenticeship and working as a pressman for several years before being promoted to head of AMPAD’s printing operation.
He introduced offset printing to the company, but his heart remained in letterpress.
“Offset printing took over at that time, and I did bring in offset at AMPAD,” he noted. Wisly, which changed hands in 1956 and underwent a name change to Hitchcock Press, was seeing similar changes. “But when I bought Hitchcock in 1971, it had both letterpress and offset, and we converted more and more into letterpress.”
Letterpress, which uses a reversed, raised surface to press relief text and art onto the paper, has a distinguished history; in fact, its creation in Germany by Johannes Gutenberg around 1440 is considered by many to be the most important invention of the past millennium.
His method of printing from movable type allowed, for the first time, the mass production of books; Gutenberg produced an estimated 180 copies of his most famous work, the Gutenberg Bible, in about a year, the same time it would have taken a scribe to complete one copy by hand. Fifty years after the invention of letterpress, more than 15 million books in about 30,000 titles existed in the world — changing the course of human history.
Over the next 500 years, letterpress printing continued to improve and gradually became more mechanized. But what originally made the process so revolutionary — its speed and efficiency — was a factor in its decline starting in the mid-20th century, as offset printing proved to be even faster and less expensive; it still dominates the industry today.
But the public didn’t abandon letterpress completely, and recent years has seen a resurgence in its popularity, Gaulin said.
“It came back because it has what no other printing has: depth,” he noted. “By comparison, you might say offset printing is completely flat, whereas letterpress has a different feel; it has depth, what we call an impression.”
The artistry and aesthetic pleasure of letterpress products are their major appeal to Gaulin, who has always considered himself an artist and photographer at heart but a printer by trade. Several years ago, he created a line of letterpress notecards created from his own artwork, earning an Award of Recognition at the 2005 Premier Print Awards, the world’s largest competition of printed products.
Many clients who approach Hitchcock for invitations, cards, and other projects submit designs through its Web site.
“We receive computer files, and we have plates made; we use magnesium plates because I consider them superior,” Gaulin said. Type is set manually, and artwork is placed directly onto the plate by an engraver. “When the plate is made, we run it on the letterpress.”
For wedding invitations, Deanna said, “we’ll give the bride the plate if they want it; sometimes they’ll frame it.”
Clients may design their own products or hire someone else to do it, she added, but if not, Hitchcock also offers design services. “We will help anyone who needs help to make it unique.”
And some of the shop’s recent products are striking indeed, with invitation cards ranging from a wedding reception at the Holyoke Merry-Go-Round (complete with die-cut horses) to a wedding on Oct. 30, with intricate Halloween-themed artwork rising subtly from the paper along with the text. Guy also showed off a card featuring both letterpressed text and offset artwork — a way for a client to save money.

Sharing a Passion
Gaulin has been an innovator as well. For example, he developed what he calls the GrayTone method of letterpress printing for a series of note cards and prints. Unlike halftone printing, which uses black ink only, requires one plate, and goes through the press one time, GrayTone uses gray inks and black ink, and the art is computer-manipulated to yield a certain number of gray values, each given its own plate, along with one black plate.
To demonstrate, he showed BusinessWest a calendar he produced, featuring a photo he took in the Grenadines, that was converted to five sets of plates and went through the letterpress five times to achieve a depth and richness halftone doesn’t offer.
Gaulin shares his passion for letterpress in other ways, including a blog he publishes at www.hitchcockpress.com, where he posts descriptions of various customers’ jobs, along with step-by-step photos.
It is there where he explains why he has continued working into his 80s.
“To my friends who wonder why I do not retire,” he writes in one entry, “I met a charming young lady and made her happy by designing and producing a fine letterpress wedding invitation package for her … and we became friends. What a wonderful world.”
After more than six decades in the business, Guy Gaulin is still making impressions for customers — and they’re still making an impression on him. n

Raipher, P.C. Continues to Build a Record of Success