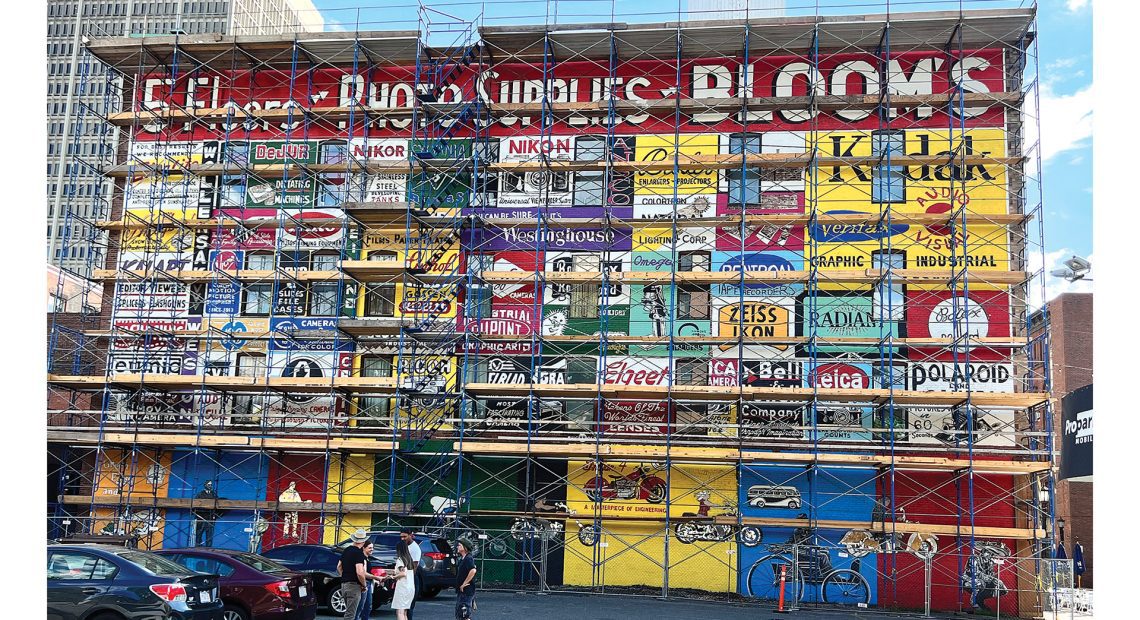 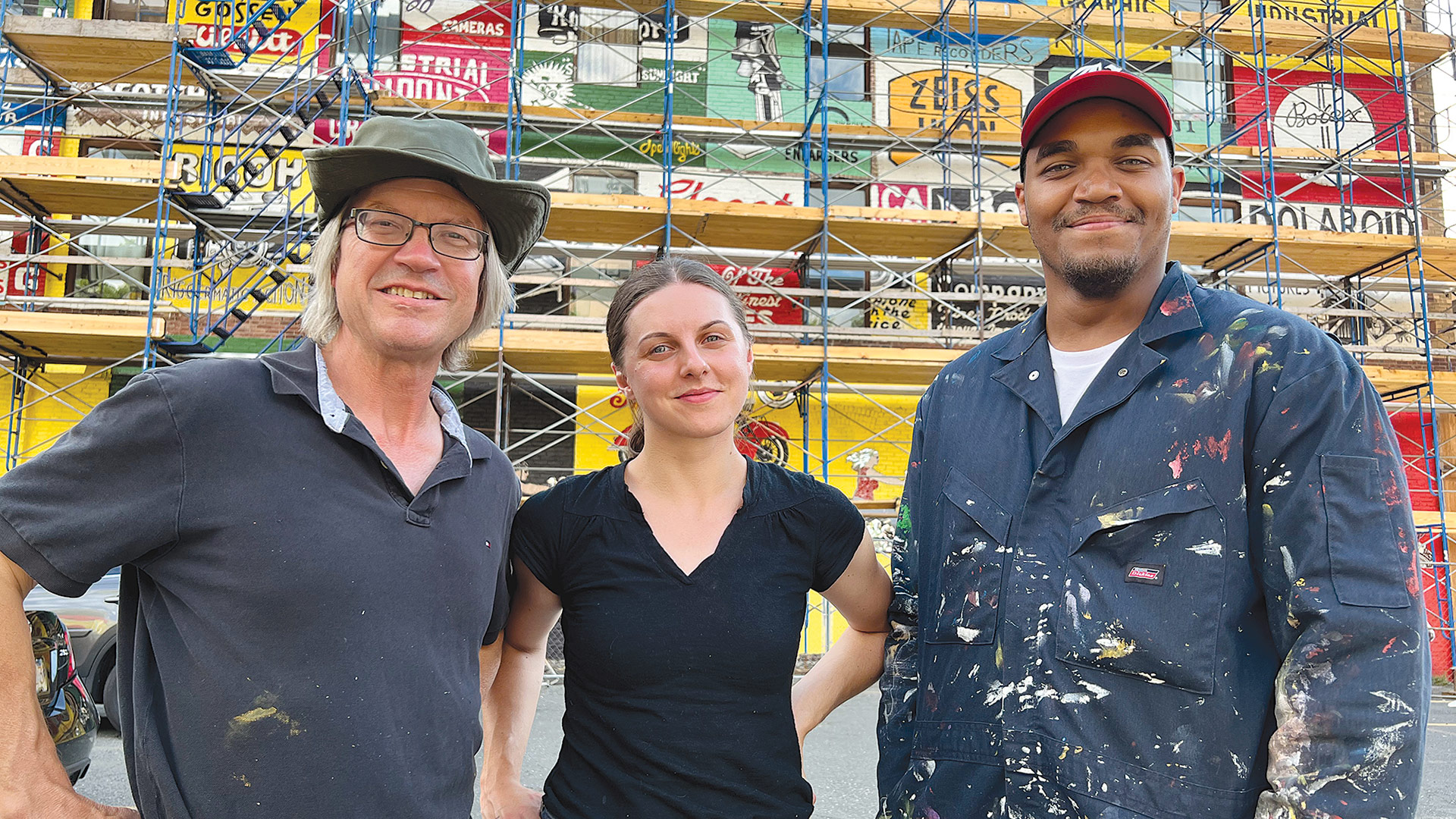 John Simpson (left) surveys the new mural as it nears completion, along with Susan Riano and Kahli Hernandez, two of the artists who worked on it. (Photos by Mark Murray)

Kahli Hernandez descended the wall, stood back, and reflected on his long day’s work.

“This mural is more than just a mural because of the things that are associated and attached to it,” said Hernandez, a local painter who got involved with the mural painting at 241 Worthington St., facing Stearns Square. “A big part of history is being plastered on this wall. Essentially, what’s happening is the legacy of Springfield is being visually painted, whether people know it or not. You can pick out iconic things that people know about around the world. Springfield is the birthplace of greatness.”

The idea for a new mural reflecting Springfield’s history came about almost a decade ago when Union Station was about to be completed and the area around Duryea Way had just been revamped. Evan Plotkin, president and CEO of NAI Plotkin Commercial Real Estate, has been a key player in the mural’s conception and production.

“John Simpson and I have been involved with most of the things that are public-art-related downtown, one way or another,” he said, noting that he and Simpson, a noted local artist, co-founded both the Springfield Cultural Council and City Mosaic, a nonprofit with the goal of changing lives and bringing people together, as well as changing the direction and conversation about Springfield from negative perceptions to something positive. 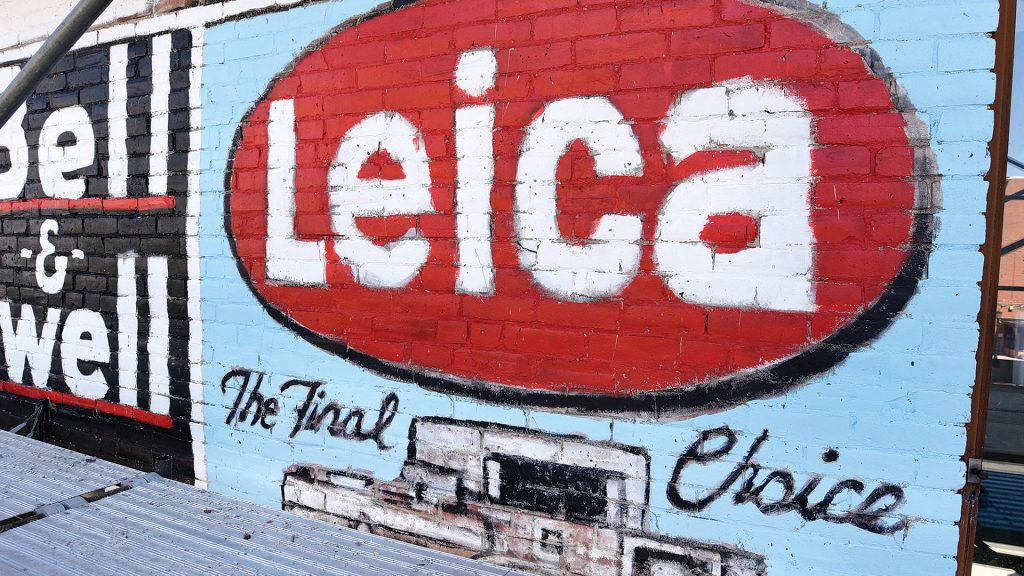 “There would be no City Mosaic without John Simpson. We formed it because we thought we could transform this city. We don’t want people to be afraid to come to downtown Springfield. We want people to enjoy what’s down here,” Plotkin said. “I think this is making a huge contribution of immense proportions. This is a gathering space down here. Everyone should be able to come and enjoy good food and good drinks with the company of friends.”

Through a movement called tactical urbanism, Plotkin and Simpson are trying to reignite a sense of community in the downtown business district. Tactical urbanism, also known as DIY urbanism, is all about action — an approach to neighborhood building using short-term, low-cost, and scalable interventions to catalyze long-term change.

“A big part of history is being plastered on this wall. Essentially, what’s happening is the legacy of Springfield is being visually painted, whether people know it or not. You can pick out iconic things that people know about around the world. Springfield is the birthplace of greatness.”

A two-year study released by researchers from the School of Social Policy & Practice at the University of Pennsylvania revealed a relationship between the presence of cultural resources in a neighborhood and key aspects of social well-being, particularly in less advantaged neighborhoods.

When controlling for factors including economic status, race, and ethnicity, the higher presence of cultural resources in lower-income neighborhoods is linked with several health, safety, and education benefits. These include a 14% decrease in indicted investigations of child abuse and neglect, an 18% decrease in felony crime rate, and also an 18% increase in the number of students scoring at the highest level on standardized math and English tests.

“I think art is really transformative for a lot of things,” Plotkin said. “It’s transformative to people and their spirits — whether it be visual art or music, art is beauty, and it helps change people.”

Simpson added that “there’s a woman that lives on this street that has told me she’s seen people stopping in the parking lot to look at the mural — they linger a little and take photos. She thinks it’s good because everyone is really excited to see the finished product, too.”

Simpson, an art professor at UMass Amherst, said he was flooded with ideas for the mural when sitting with the City Mosaic council. He told BusinessWest there were plenty of ideas about historical figures and events showing Springfield’s pride, but the wall had a different idea, in the form of faded vintage advertisements.

“I said, ‘yeah, I know you want all of this stuff on the wall, but there are also the ads. We want to restore some of them, so I reserve the right to do whatever I want here,’” Simpson said. “When I started, I felt like the wall was going to dictate what it should be. So whatever can be saved, will be saved. Then we thought there was so little to be saved, but eventually, when you get one thing, you’d start to see another.”

He explained the process: research and stare. Then relax. Simpson compared the mural to a “puzzle of ghost images” they were hoping would fall into place. It was beyond the scope of his usual work, but he took it all in and got to work. 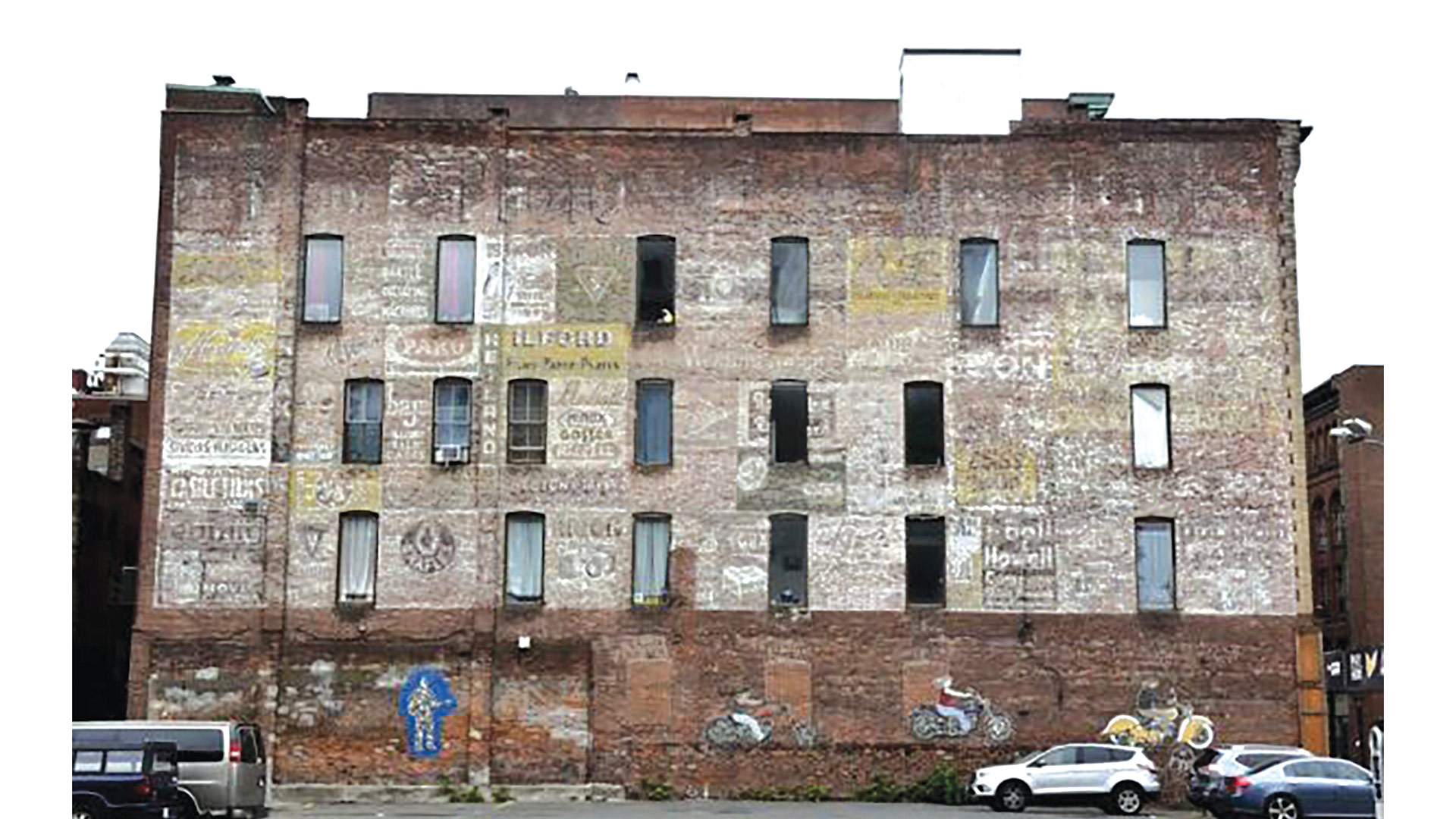 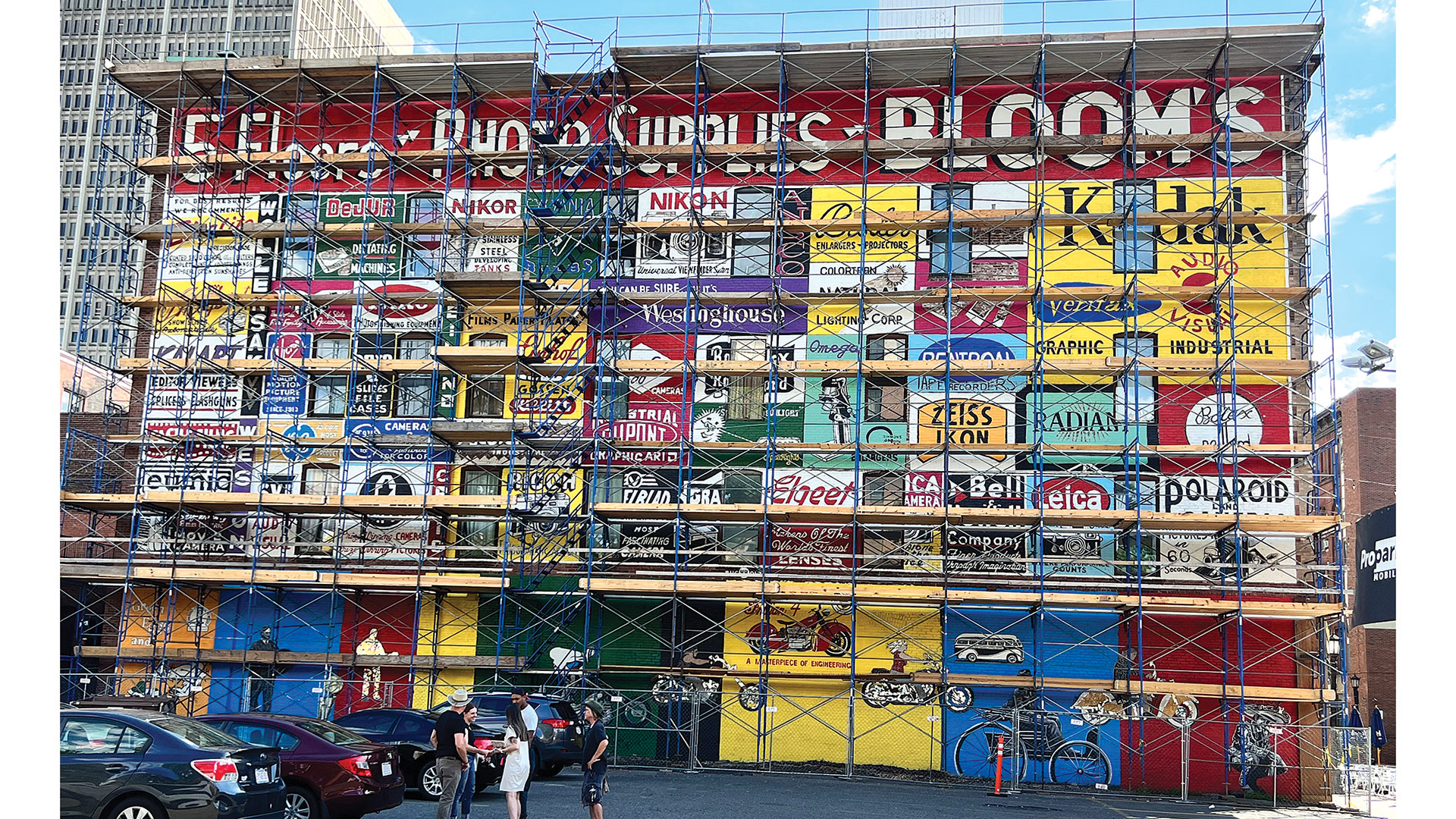 The new mural brings a moment in Springfield’s history back to vibrant, colorful life.

“We got addicted to finding what was there previously and recreating it,” he said. “Evan encouraged me to work on the design. I tried to keep changing it, but it led me here. There has been such great teamwork that it feels like only one person is working on it.”

Artist Susan Riano was also impressed by the work that has gone into the mural on Worthington Street.

“Going in, we all thought it would be a huge project, but we didn’t let the thought of getting overwhelmed bother us. We just went at it and things went pretty naturally, organically. Looking at it now is kind of crazy, but amazing to see how much we were able to accomplish through the whole process,” she said. “It was really cool to see the work of another artist and figure out their process, and see the way they did things — it was a learning experience for us as well.”

Some of the images painted on the wall are meant to represent Springfield and its community through the years. For instance, Simpson and the artists painted a Rolls-Royce with Prestley Blake, co-founder of Friendly’s, driving it.

When community members see themselves reflected in social spaces, they feel a sense of respect, ultimately allowing for people to identify with the place they are from, live in, or are visiting. Cultural assets are part of a neighborhood ecology that promotes well-being.

Simpson told BusinessWest about another mural he had worked on and how it connects to his overall goal. “It says, ‘there’s no place like Springfield’ because there is no place like home. That’s for every kid to think about, instead of things they’re hearing from other towns. Springfield is home — there’s history here with beautiful people, art, and architecture.” 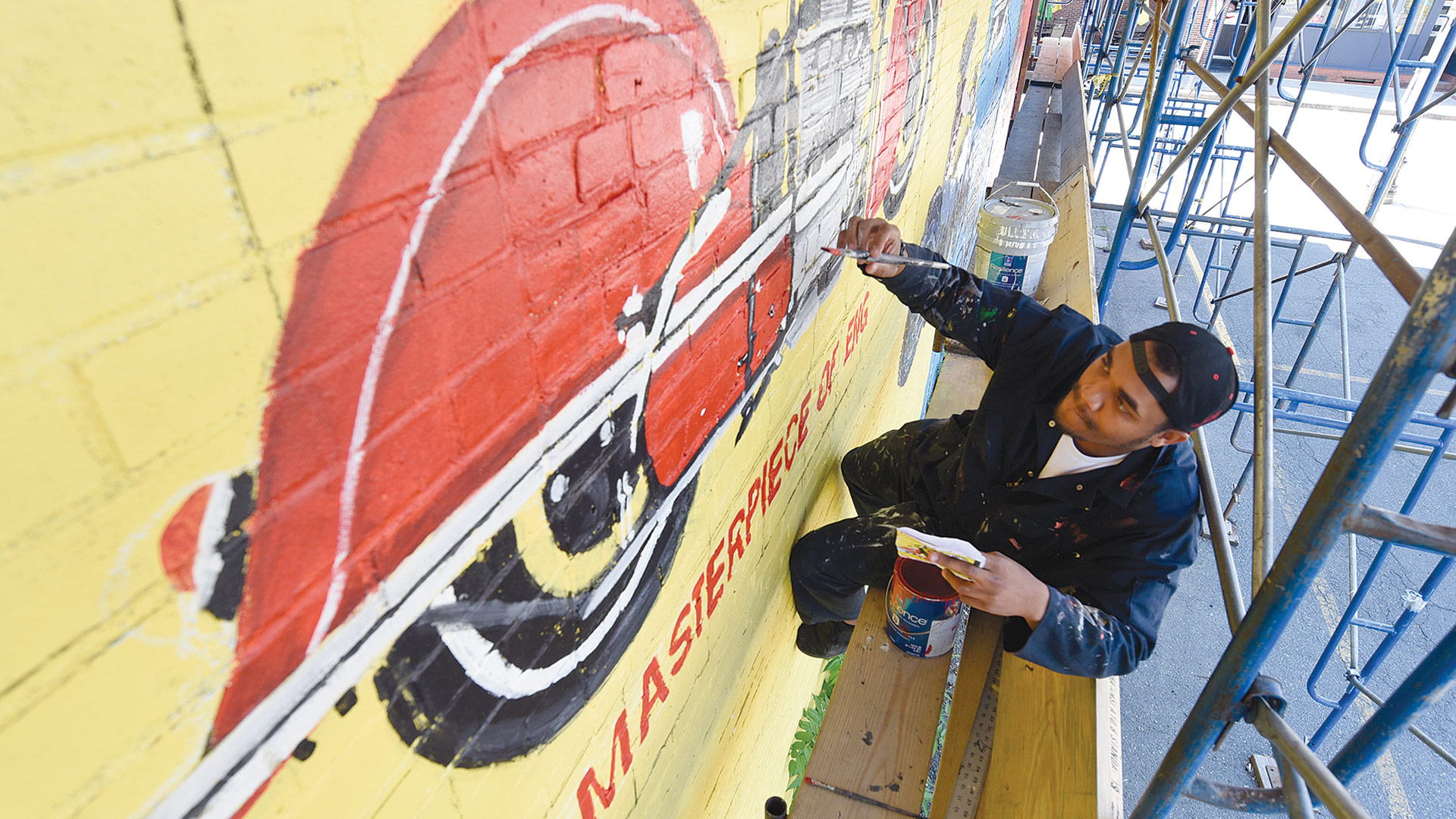 Kahli Hernandez puts the final touches on one of the mural’s small sections.

Plotkin agreed. “Springfield has an incredible history. To have something as big and beautiful as this spurs the imagination of those bygone days and recognizes a city that was once another Springfield.

“I think that’s why I do it,” he went on. “John is the artist, and I think that I wouldn’t be able to do what he does; physically, I don’t have the talent. I just really get off on the impact it has on the community and the responses people are giving. I’ve lived and worked here for many, many years. I’ve seen some great times here, and I’ve seen some bad times here when the city wasn’t flourishing as much. We’re on the rise again, and we’re coming back strong. This is going to help us reach the point where we have a commercially viable district here. We want to recreate that.”

Clearly, the mural on Worthington Street is more than just a mural. It is a physical representation of what Springfield has to offer, and a reminder that the past impacts the future, and the future always reflects the past.

“We want the wall to show a little bit of the past, some of the present, and eventually the future,” Hernandez said as he surveyed his day’s work. “It’s a tribute to the overarching narrative that is a part of Springfield.” 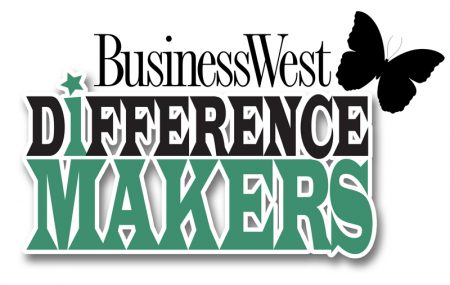