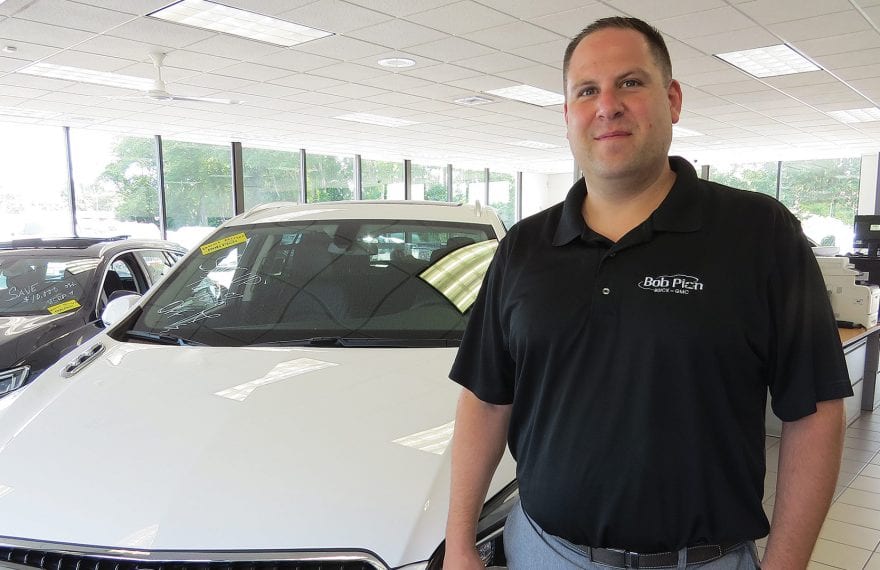 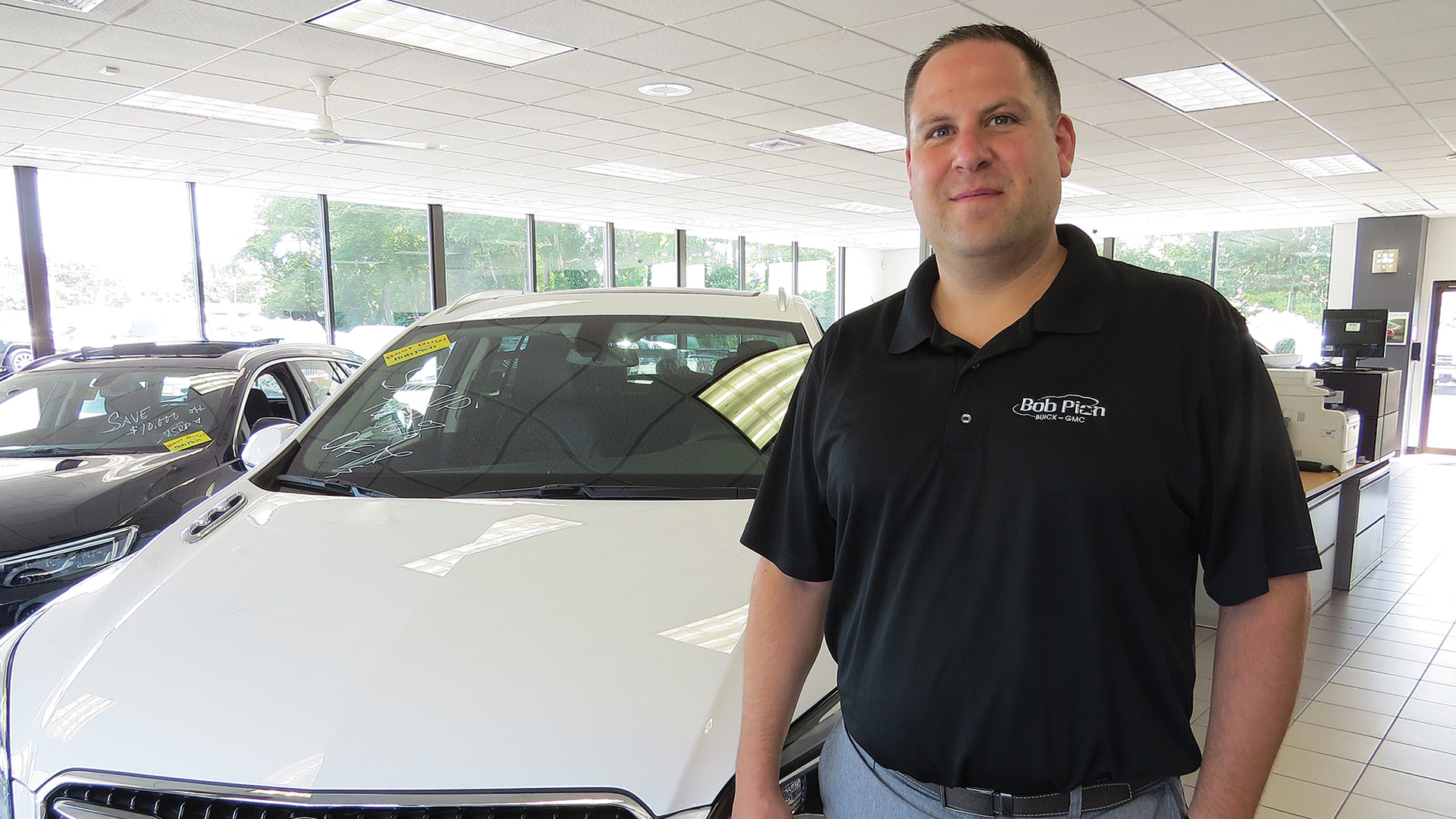 Rob Pion, says Buick is trying to make inroads in the SUV market and has a lineup to do just that.

Editor’ Note: With this issue, BusinessWest launches something new and different for its auto-sales section — first-person looks, and some commentary — about some of the vehicles that are, let’s say, in the news.

And that person will be me.

That laughing you just heard was brother Robert. He’s reading this and thinking, if not saying out loud, ‘George is going to do car reviews?!?’

Well, sort of, as I will explain.

First, as to why my brother is laughing … while, like most all guys (and people for that matter), I like cars and shared every Baby Boomers dream of owning a 1972 Dodge Challenger, I am not a ‘car guy.’

Am I, however, like most people. My ability to ‘work’ on cars is limited to adding washer fluid and putting air in the tires. I wash it, I vacuum it, I put Armor All on the steering wheel, I put gas in it, and I drive it. That’s most people. So am I qualified to do this? I guess. As much as anyone else.

What is this? Well, it’s not reviews of the cars and trucks coming onto the market these days. I won’t be rating cupholders, trunk space, and headlights — although they’re all important. I’ll be using test drives to talk about emerging stories in this business — and talk a little about the cars, trucks, and SUVs themselves.

First, more about me … my first car was a 1973 Chevy Impala. There are a lot of Boomers nodding their heads right now. That was a lot of people’s first car. It was a large, four-door sedan, and I have been driving those ever since, with one real exception.

My now ex-wife and I were in Aruba in 1994, visiting the far side of the island. Those who have been there know it looks like the kind of place Kirk, Spock, Dr. McCoy and the crew member destined to die in that episode would beam down to and put the phasers on ‘stun.’ It’s desolate, with lots of sand and pink rocks and things like that. Anyway, to get around, you need a four-wheel drive vehicle, so we rented a Chevy Tracker, a small, as in very small, domesticated version of a Jeep.

We liked it so much, we said ‘when we get back, we gotta get one of these.’ And we did.

My sister in law likened it to a ride at Six Flags. ‘You have to be at least this tall to ride in it,’ she would joke, ‘and you must keep your hands and feet inside the vehicle until it comes to a complete stop.’

Other than that, large four-door sedans. With big back seats and big trunks. This, despite the fact that I don’t think I’ve had a human passenger in my back seat since a funeral procession. In 1993. But I have to have a big back seat. As for the trunk, it’s for the golf clubs, but hardly anyone builds a trunk big enough to put all the clubs down sideways or even on an angle. So I have to take the driver out, which is a pain.

All of this provides a nice segue to … Buick.

This is the company that invented the large four-door sedan. Well, not really, but everyone thinks they did. That’s seemingly all they made for decades, for guys (and women) like me.

For some time now, Buick has been working hard to put young people into their vehicles. In the late ’90s and early 2000s, you might remember that GM hired Tiger Woods to be its Buick spokesperson. His mission wasn’t to sell to golf fans, but to the younger audience, and he had some success. That’s some.

Today, Buick is letting its cars do the talking, only the cars are, for the most part, SUVs. (I have been told that in the lingo of the industry, SUVs are not cars; they are SUVs. Large four-door sedans are cars. That’s what I’m told.)

Back to Buick … they’re not selling many cars anymore, but they’re selling more SUVs — and to people of all ages, as Rob Pion, third-generation general manager of Bob Pion GMC Buick in Chicopee, explained as we took the Buick Enclave (Avenir model), the largest of the models in the lineup, for a spin.

At first, I thought it was the SUV.

The world really does look much different when you’re riding high in a large SUV (maybe 30 inches from the ground) as opposed to your standard four-door sedan (maybe 20 inches).

But it’s not the vehicle, Memorial Drive looks much different from any height, as became clear as we headed north on that road from the Pion dealership toward South Hadley.

Back when Tiger Woods was plugging Buicks and Bill Clinton was in the White House, BusinessWest operated out of a small office on Memorial Drive. Back then, this was the land that time forgot — there was a dead mall (Fairfield), a Ponderosa Steak House (maybe it was a Bonanza), and other chain restaurants seen nowhere else. Things look much better now with new hotels, a strong lineup of stores where the mall was, and many new businesses.

But there is that huge open lot where the Hu Ku Lau used to be.

“We’re not sure what’s happening there,” said Pion as we drove by the grassy lot, obvious concern in his voice. “Everyone’s watching that closely to see what develops.”

Enough about Memorial Drive … back to the Buick and the Enclave Avenir, sticker price just under $60,000. It’s large, with three rows; looking in the rear-view mirror, the back window looks like it’s in another state — one of those in the Midwest — and well-appointed. It features what’s called ‘intelligent all-wheel drive,’ which means it did well on its SATs, and has every safety device one might expect, as well as all the technology, meaning connectivity. It’s six-cylinder engine delivers 310 horses and decent mileage for something this large — 17 city/25 highway mpg (see, I can do car talk). Meanwhile, it easily passes the golf-bag test.

And it’s really, really quiet, meaning my tape recorder had no problem picking up Pion as he talked about how Buick’s SUVs — the smaller Encore, mid-sized Envision, and large Enclave — are expected to compete with the top luxury brands in the market and bring younger audiences into the Buick showrooms. 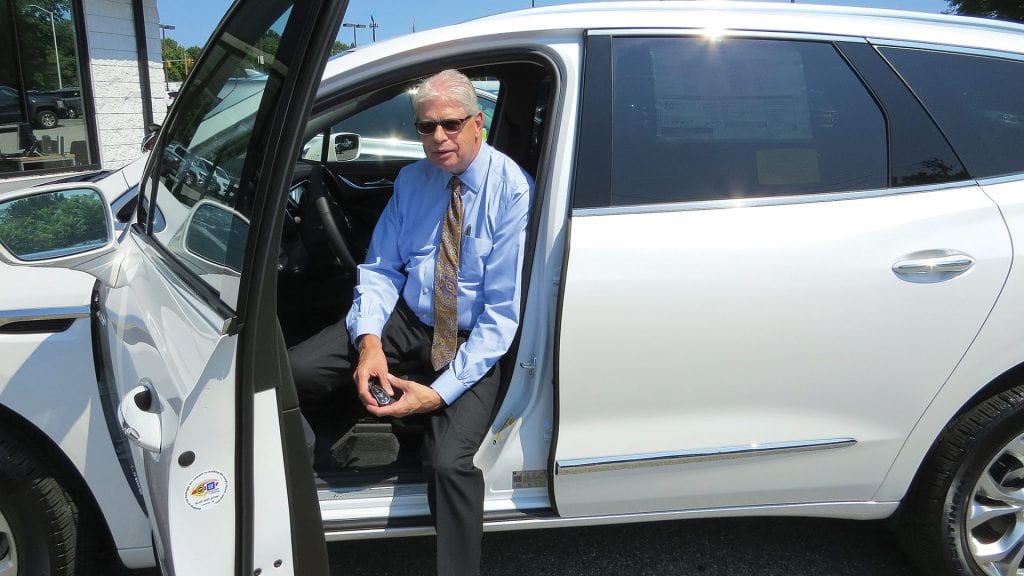 BusinessWest Editor George O’Brien tries out the Enclave Avenir, the top of the line.

“GM’s vision for this is to go against BMW, Lincoln, Mercedes … the premium SUVs,” he said, referring specifically to the Enclave Avenir, but ostensibly to the whole lineup. And while Buick is still lagging well behind other brands when it comes to SUV sales, it is starting to gather some momentum, especially with the smaller model, the Encore, priced in the mid 20s to just over $30,000.

“We’re getting young people to at least come in and give it a look,” Pion said of the SUV lineup. “Many wouldn’t even do that before.”

Buick still has a long way to go to not only shed it’s old-person’s-car image but also become a serious player in the white-hot SUV market.

But based on this drive down Memorial Avenue and the vehicles now in the Buick showrooms, the carmaker known for sedans, as in big sedans, would appear to have a fighting chance. u