Budzee Breaks New Ground by Bringing Cannabis to Your Door 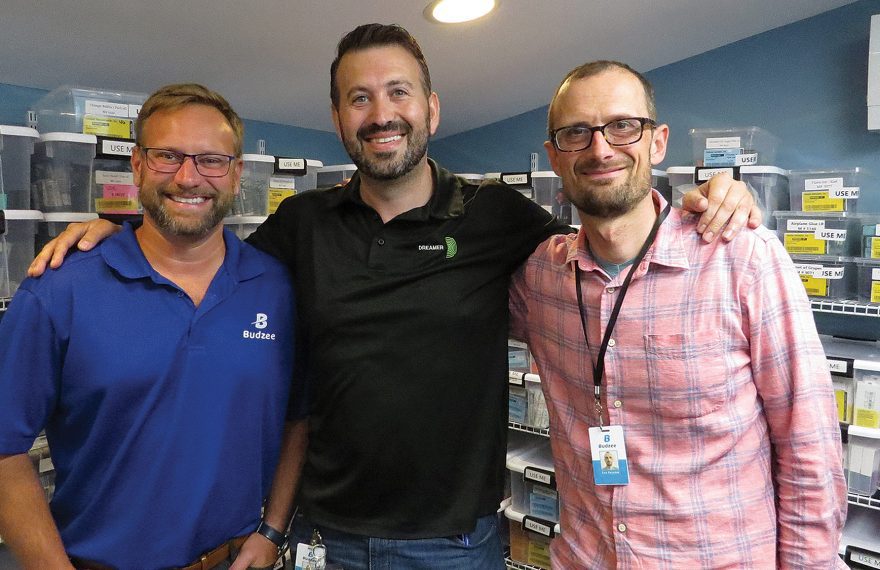 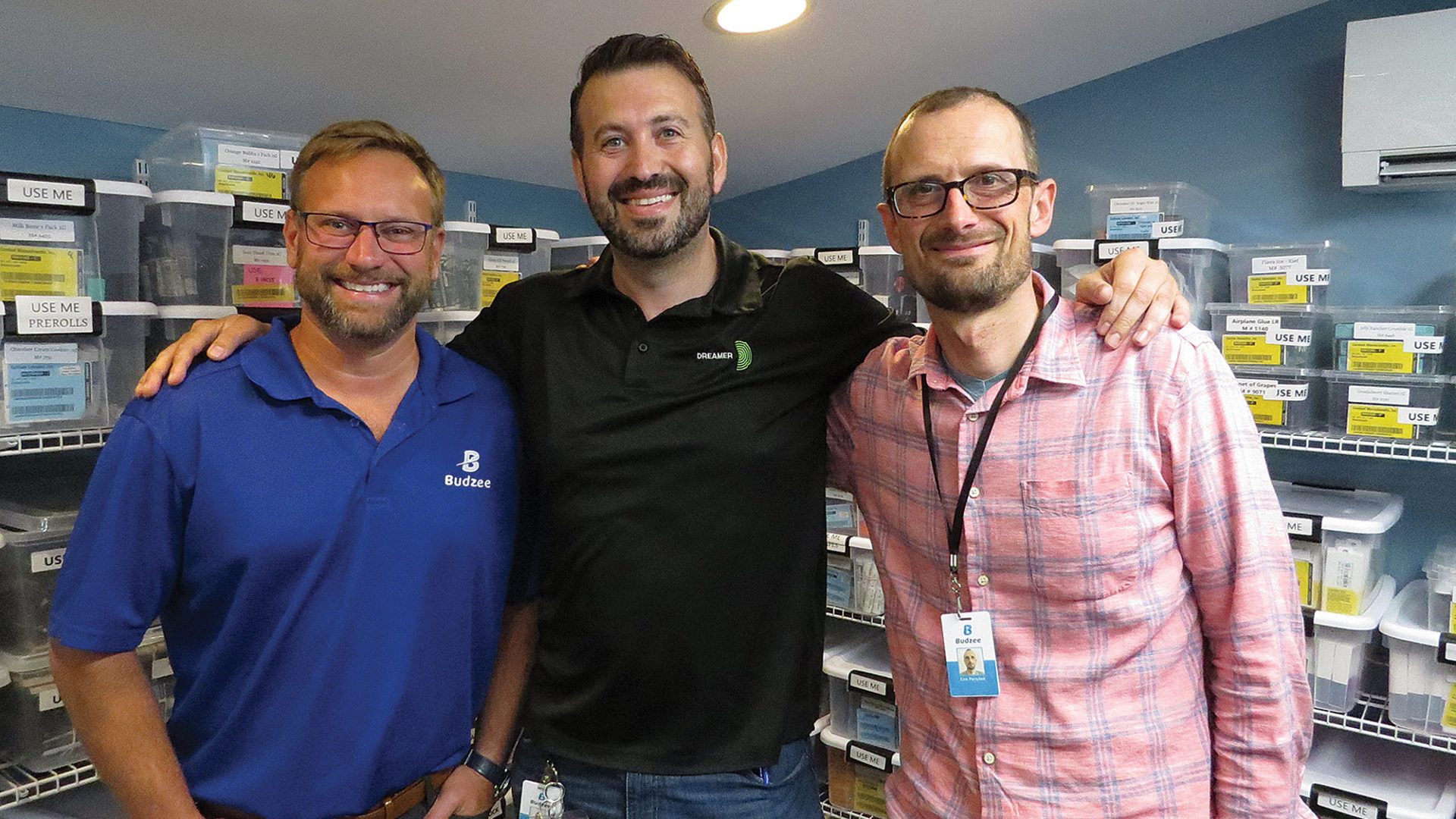 Volkan Polatol didn’t actually speak the words, but he strongly implied them: ‘If this was easy, then everyone would do it. Or at least try.’

The ‘it,’ in this case, is delivery of cannabis products — Amazon-style. Polatol, teaming with Kevin Perrier and Ezra Parzybok in a venture called Budzee, has created such a service, believed to be one of the very few in this region, and the country, for that matter.

As the partners talked about their business, they addressed that logical question about why they are the first and why there are not more ventures addressing what appears to be a logical need within the marketplace.

And the simple answer is that this isn’t as easy as it looks. And it doesn’t even look easy.

Indeed, there are complex licensing issues to overcome, software programs to develop, logistics, myriad expenses — from buying dedicated, unmarked vehicles to outfitting them with special equipment, to staffing each vehicle with two people (one of many requirements to be followed). And now, gas costs more than $5 a gallon.

“All of this is incredibly expensive, and it’s very difficult; we had to create the model,” said Polatol, who summed it all up by saying that a roadmap had to be in place for such a unique venture.

Parzybok agreed, and elaborated — on the many challenges facing this venture and all businesses in the cannabis sector.

“There’s a strain put on these businesses when the state invents all these rules that make it difficult to run a smooth, profitable business,” he explained. “The rules for cannabis are more strict than for pharmacies that sell opioids; they’re more strict than those for the delivery trucks that deliver alcohol. All that costs money.”

The partners who created Budzee, all veterans of this industry in one capacity or another, have chosen to take on all these challenges — they opened their doors this past spring. And that’s because, despite all these hurdles and expenses, they see real need for what they’re doing. They also see a path to profitability — not right away, but certainly some day, and perhaps soon as word of their venture grows and more people decide that it’s easier to have cannabis products delivered to their door than it is to travel to an area dispensary.

“There are people who can’t drive to a dispensary,” said Polatol. “Meanwhile, even though cannabis is legal in this state, there is still a stigma out there; some people don’t want to be seen in dispensaries. There’s still a great many people who want to be home, and they like the convenience of things being delivered to them.”

“There’s a strain put on these businesses when the state invents all these rules that make it difficult to run a smooth, profitable business. The rules for cannabis are more strict than for pharmacies that sell opioids; they’re more strict than those for the delivery trucks that deliver alcohol. All that costs money.”

And that brings the partners, who have invested more than $1.2 million to move Budzee off the drawing board, to the major challenge that remains for them — educating the public about this service and the convenience it brings.

“There’s considerable work to do to educate the public about this,” said Polatol, adding these efforts are ongoing. “Once we get established, people will understand; there are so many non-cannabis models out there — from Domino’s Pizza to Amazon. Once they understand it, it clicks. To get it out there, though, will require marketing, marketing, and more marketing.”

Parzybok agreed, and said that in time, consumers will come to understand, appreciate, and embrace the convenience just as they have in many other industries where home delivery has become an important part of the business model.

“It’s a new industry, so you assume that most licensed categories are going to be profitable,” he said. “You can look at the numbers for retail establishments or see the lines coming out the door when retail was opening, so you just assume that people will also embrace delivery. But when Amazon first came out, people were like ‘why should I buy something on the Internet when I can just go get it at the grocery store?’ But now they realize that they never have to bring it in from their car again.” 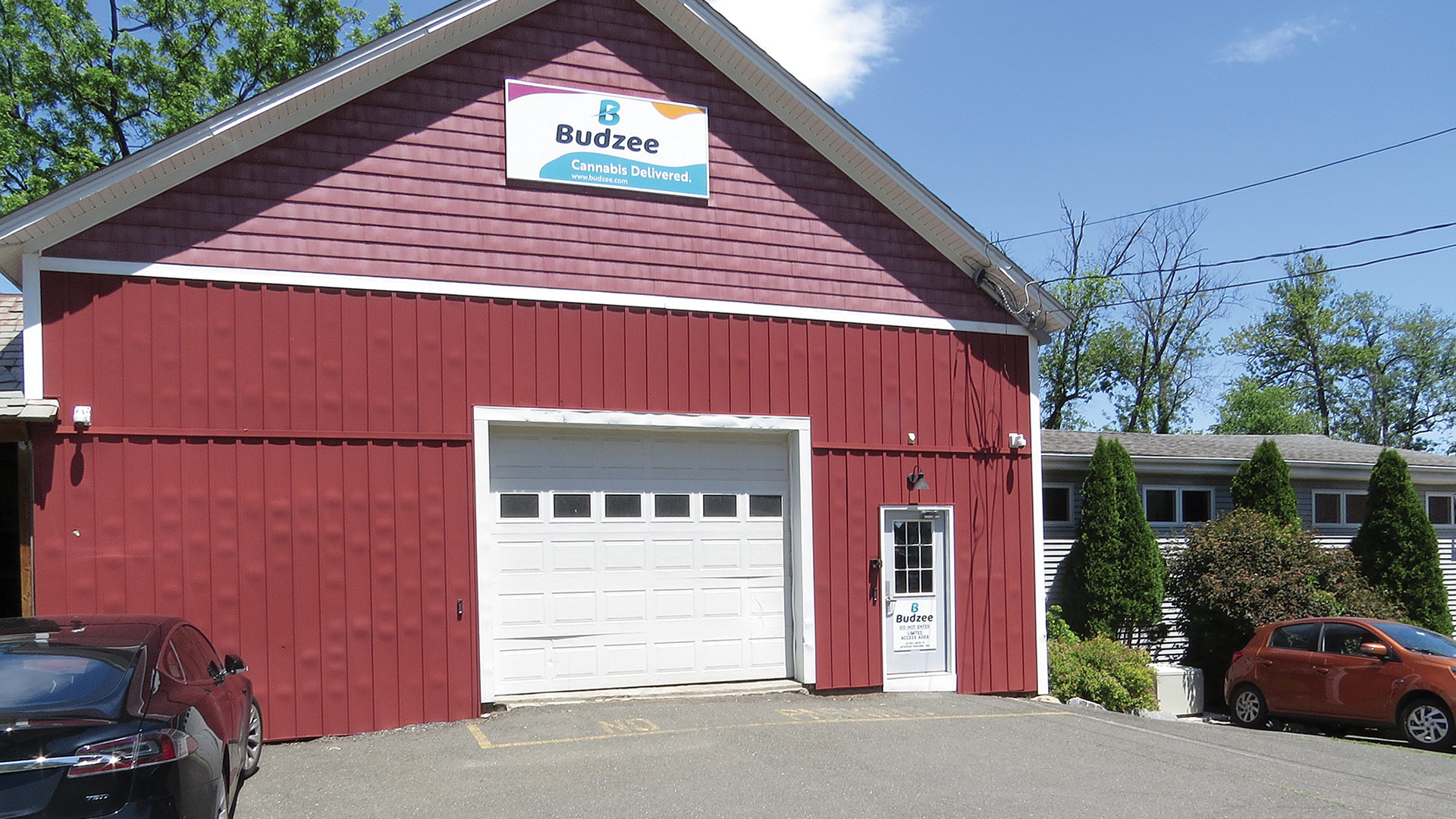 Budzee’s location in Easthampton is ideally situated off I-91

Getting the word out, and creating a comfort level with home delivery of cannabis products is essential, because with this model — where Budzee is charging the same price for products as one would pay if they went to a dispensary (there is a $100 minimum) — relies on volume. And creating it will be the primary assignment moving forward.

“It’s all about scaling up,” said Polatol, adding the goal is to eventually serve the entire state and build a large portfolio of new and repeat clients.

For this issue and its focus on the region’s emerging cannabis industry, BusinessWest talked with the partners at Budzee about the venture, what it took to get it off the ground, and how they anticipate that it will continue to gain altitude in the months and years to come.

As they offered BusinessWest a quick tour of their facilities — dominated by signs that read ‘authorized personnel only’ or ‘Do Not Enter — Limited Access Area’ — on just about every door — the partners stopped in the large vault area where the various cannabis products are stored and then gathered for delivery.

There are literally hundreds of different products on the shelves — a selection larger than what is to be found at most dispensaries, said Polatol — with names ranging from Rootbeer Float to Blue Sunshine; Purple Pineapple Express to Sundae Driver.

Putting such a portfolio of products together has actually been one of the easier aspects of this enterprise, they noted, adding quickly that just about everything else — from the software to the business model; from the licensing to the logistics — is difficult and, in many ways, pioneering.

Turning back the clock roughly two years, Polatol said the three partners came together behind the idea that the region needed a service that would ‘bring cannabis to your house like a pizza,” as he put it, and conviction that this team had the expertise, determination, and patience (a key ingredient to be sure) to make this happen.

There were some courier-like businesses working on a DoorDash model, said Polatol, but the concept they had, for a warehouse, Amazon-like model, was totally unique for this region, and the country, as far as they knew. 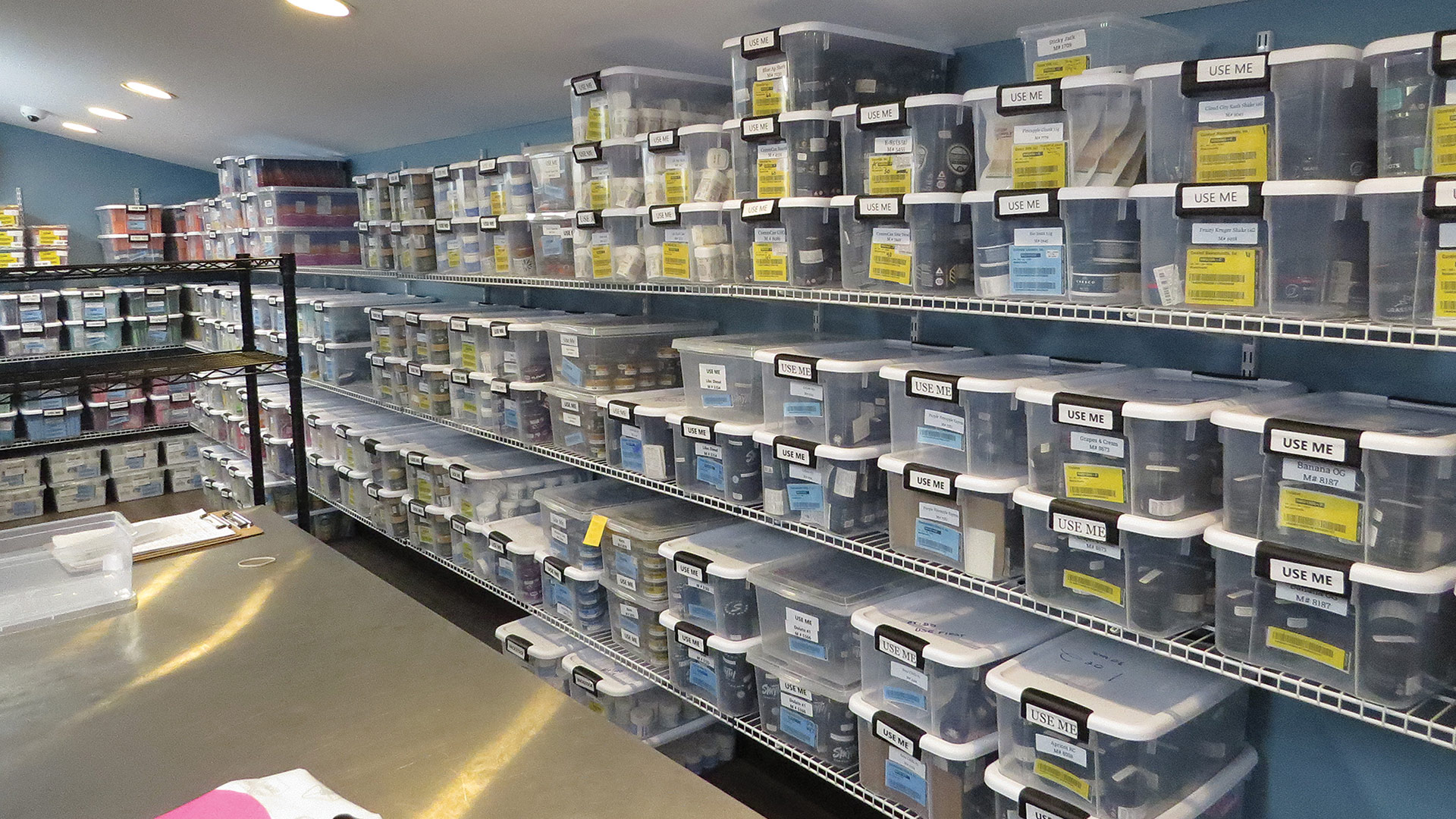 The vault at Budzee holds a wide variety of products for delivery to customers.

The partners already knew each other well. Polatol and Perrier are the owners of the dispensaries Dreamer Cannabis in Southampton, and Honey in Northampton, and Parzybok served as a licensing consultant on those ventures. United in their vision for this new kind of business, what they put together a checklist of everything that was needed, and then a roadmap for taking the concept from the drawing board to the marketplace.

The first item on the list was a license, which was somewhat problematic, because the state was, and still is, awarding cannabis-delivery licenses exclusively to those who qualify for the state’s social equity program — meaning they were previously harmed by the nation’s war on drugs.

Enter Parzybok, who was arrested in 2015 after federal agents raided his home in Northampton and eventually seized dozens of marijuana plants; he received probation for the offenses.

The license-application process was lengthy and complex, mostly because of the new ground being broken, but also because the Cannabis Control Commission has historically been methodical when issuing licenses, said Perrier, adding that this bridge would eventually be crossed.

The partners also needed a location, and realized that they actually had one in property that Perrier owned in Easthampton that was ideally situated less than a minute from an exit onto I-91, positioning the company to deliver to the four counties of Western Mass. and beyond.

They also needed software for taking orders, vehicles, specialized equipment, drivers (a challenge when all companies are looking for help), and a system for safely getting products into those vehicles and then into the hands of customers.

All those hurdles were cleared early this year, and the company commenced deliveries in early April.

Most of these have been in and around Springfield, but there have been some farther east; the territory attached to the license is essentially everything west of Worcester. And the two-person teams (one drives, the other brings the items to the door) are delivering the full spectrum of products, from flowers to edibles to accessories.

Thus far, business has been good, but the venture is still very much in the ramping-up phase as awareness of the service builds, the public becomes more comfortable with the notion of having cannabis delivered to their doorstep, and it understands (at least with this company) that delivery is not more expensive than going to the dispensary.

And there are obstacles to building this awareness, they said, adding that state and federal laws limit where and how such a venture can advertise its products and services. For example, cannabis companies can only advertise on vehicles that can prove that 85% of their audience is 21 or older, said Perrier. Meanwhile, because cannabis is still illegal federally, such platforms as Google, Instagram, and Facebook “won’t take our money,” he noted, adding that television stations will not take it, either. They can’t even advertise on the vehicles delivering the products — those must be unmarked for, presumably, security reasons; this is a cash-only business.

“You’re really handicapped in how you can advertise,” said Polatol, adding that the company is using some billboards and a digital campaign to draw people to the Budzee website. But that’s just half the battle. Once there, consumers need to become comfortable with the products and procedures, and place orders.

Despite these challenges, the partners believe they have the right concept at the right time, and as awareness and comfortability grow, they will achieve the volume they need to be profitable.

“Once Budzee becomes known as a household delivery option for cannabis, things will snowball and we’ll get bigger numbers,” said Polatol. “And we’re seeing that right now; the numbers are going up every week, and we’re getting a lot of regulars.

“There are some people who can’t leave their house for health reasons, and they’re ordering from us three times a week,” he went on. “They love it, and it’s rewarding for us; it’s a model that’s working.”

At present, the company is making maybe 20 to 30 deliveries a day on average, he said, with the goal being to take that number past 100. Other goals are to go statewide (more licenses will be needed for that) and then perhaps to other states, he told BusinessWest.

None of that will be easy, of course. But as these partners have shown, they are willing to assume challenges and clear some high hurdles to get where they want to be.

And right now, they are where they want to be — the first to be out the door (and to your door) with delivery of cannabis products.

They know that it will take some time to scale up, as Polatol noted, and reach the volume level they need to be successful, but they believe they have a model that works and a foundation to build on.