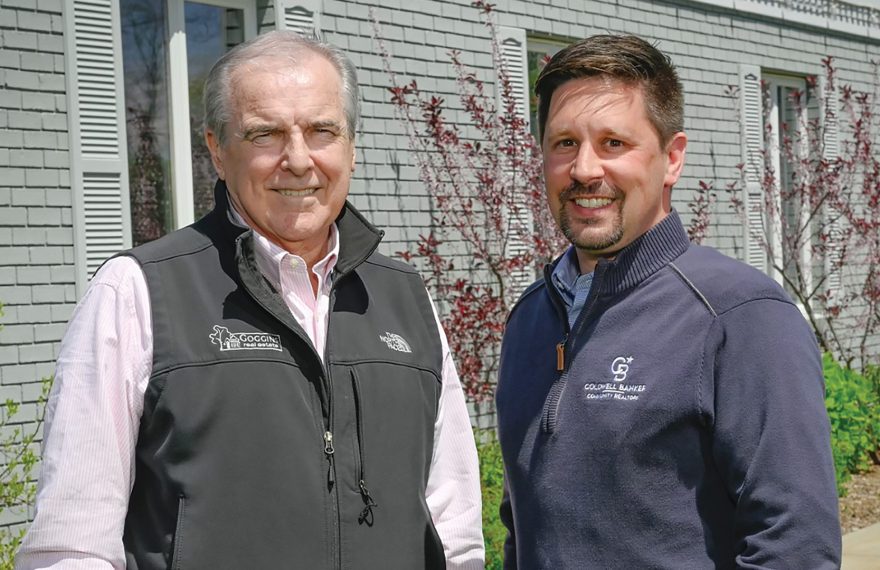 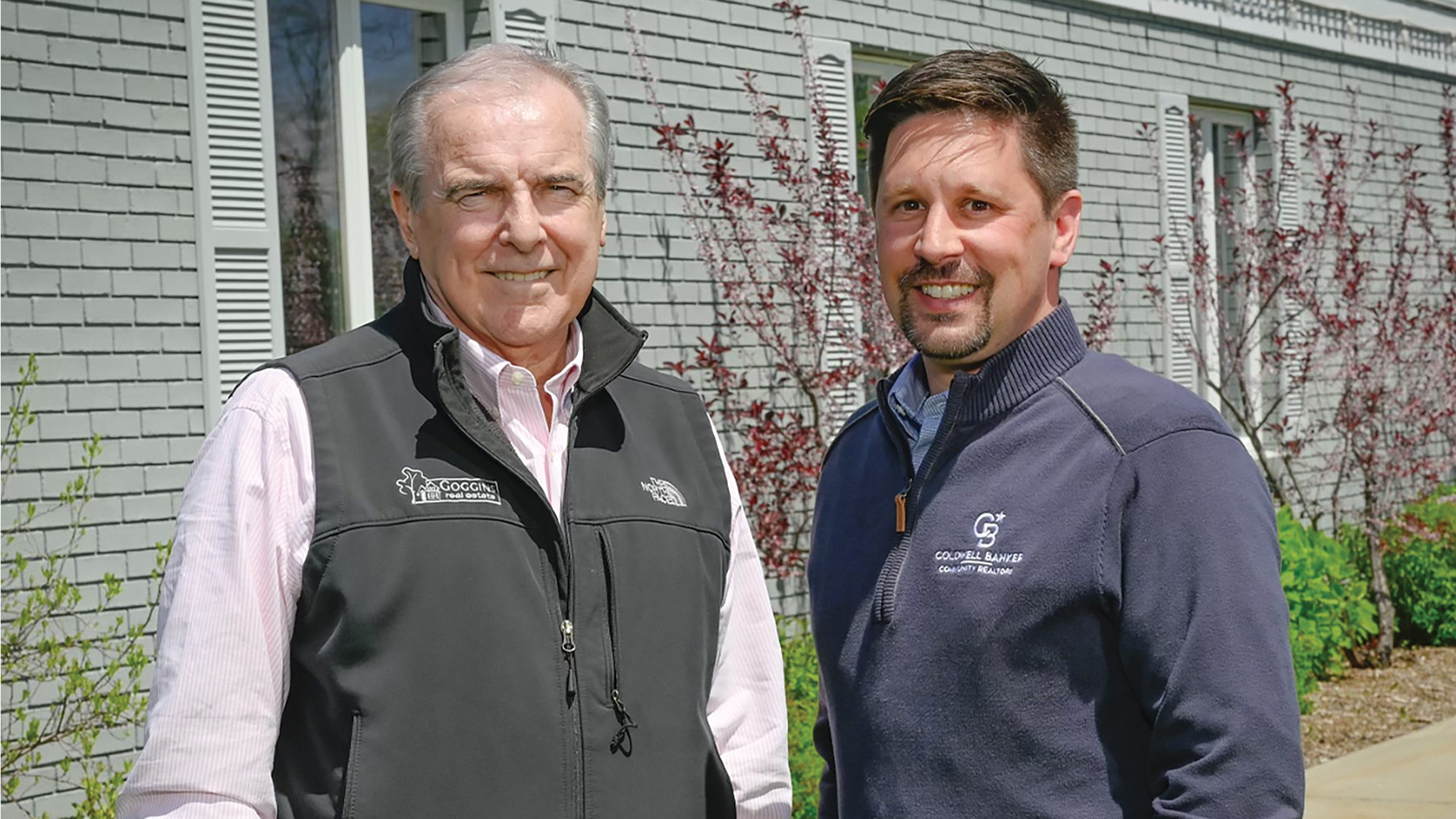 Pat Goggins and Brian Megliola say the talks concerning an acquisition and merger of their companies began more than a year ago. They started — and then continued to a successful conclusion — because of similar philosophies and the shared belief that a union made sense on many different levels. The new company, with two divisions based in Northampton, will emerge and “be right at the top of the agencies in this area,” said Goggins.

“I’ve always had so much respect for Pat and what he’s achieved in the Northampton, Hampshire County area,” said Megliola, owner of Coldwell Banker Community Realtors. “He showed me what I wanted to be as a business owner.”

Elaborating, Megliola said that it was Goggins’ success in business — he and the company he started have been a force in commercial and residential real estate in and around Northampton for 40 years now — as well as his commitment to the community that made him not only a role model, but a logical business partner.

Indeed, Coldwell Banker Community Realtors recently announced the acquisition and merger of Goggins Real Estate, a transaction that will bring together two of the longest-running family-owned real estate companies in Franklin and Hampshire Counties. The union that will create a larger, more powerful force in the local market, and one that is expected to balance an already-formidable residential real estate book of business with growth on the commercial side of the ledger.

“When I started talking with Pat about the acquisition and merger more than a year ago, our companies were just so aligned in our values and culture,” said Megliola. “I’ve always seen Pat as a heavily involved community figure and he’s always been a role model for me. His involvement with the community made sense that he would be the right person. It was a perfect scenario — there was no other company we could blend with so well.”

“I’ve always had so much respect for Pat and what he’s achieved in the Northampton, Hampshire County area. He showed me what I wanted to be as a business owner.”

“We felt it was important to continue the legacy that Pat has created in commercial real estate in the Northampton area and fitting to rename our commercial company to include the Goggins name.”

Pat Goggins will continue on as the manager of the commercial side, building on four decades of work that have seen the ‘Goggins’ name attached to a large portion of the commercial transactions that have taken place since the Northampton market started booming in the early ’80s.

“I plan to remain very active in real estate and look forward to running the commercial company”, said Pat Goggins.  “I look forward to this new partnership, as it enhances our ability to provide even better service to our clients with the added tools and systems we will now have available to us through Coldwell Banker.

“They are an impressive organization and bring a lot to the table, both for our residential clients and our commercial ones as well,” he went on, adding that the acquisition came about after lengthy talks — and, unlike many such deals, it is a true acquisition.

“This was something that Brian paid for; it was a reflection of his interest and determination on his part as to where the value was,” he explained. “If you’re buying anything, you have to figure out what makes that particular purchase valuable. And I think that he felt that we were not only compatible, but he was also intrigued by the market share that we have had for many years.”

“When I started talking with Pat about the acquisition and merger more than a year ago, our companies were just so aligned in our values and culture.”

For this issue and its focus on commercial real estate, BusinessWest talked with Megliola and Goggins about how this important deal came about and what it means moving forward.

As noted, the two companies that came together in this merger have long histories in this region.

Goggins got his start in 1982, and over the ensuing 40 years, the firm has handled some of the Northampton area’s biggest residential developments, including Bear Hill, Village Hill, Parson’s Brook, Baker Hill, and is presently handling the new development Hawley Manor on Hawley St. in downtown Northampton.

But the firm has made perhaps an even bigger influence in the commercial market, handling handing many of Northampton’s biggest commercial deals over the years, including countless transactions in the downtown area, which has remained consistently vibrant.

Over the past four decades, Pat Goggins has been a go-to source for BusinessWest and other media outlets on what was happening in the Northampton commercial market and the forces that were driving it.

As for Coldwell Banker, Coldwell Banker Community Realtors of Hampden, Hampshire, and Franklin counties originally started as Upton and May Real Estate in 1987 in South Deerfield, with Christine Aubrey, and Steve Upton, who were both teachers. When they got laid off from teaching in Turners Falls, Upton decided to make real estate a full-time job and asked Aubrey to help run the office. They built their own properties and soon after that, people asked them to assist in selling their own homes. They then merged with Massamont Real Estate in Shelburne Falls, and became Upton Massamont Real Estate. They later franchised with Coldwell Banker in 2006 and have grown to four offices, located in Northampton, South Deerfield,  Shelburne Falls and Amherst.

They also have a commercial office in Greenfield, and they’ve handled many residential developments throughout Franklin and Hampshire counties, including Emerson Way, Silvercrest, Ridgecrest, most of the condominium developments in South Deerfield and, currently, The Residences in Shelburne Falls.

“We’re going to see something emerge that is going to be right at the top of the agencies in this area.”

Megliola, who has been with Coldwell Banker for 13 years now — the first seven years, he worked in IT and worked his way up to operations — will be the sole owner of Coldwell Banker Community Realtors and Coldwell Banker Commercial-Goggins Associates, and will oversee all aspects of the new entity. Besides Megliola, there are nine other full time support staff and a total of 45 agents, many of whom have been Realtors for over 25 years.

The name “Coldwell Banker Community Realtors” will remain as the name of the residential real estate company.

“Pat, Christine and I share a strong commitment to the communities we serve and feel that name speaks to our style of doing business,” said Megliola. “We have all been very active in supporting our communities and although we have a national brand that brings us a higher level of service for our agents and clients, we are still a locally owned company that has deep roots here in the Valley. That will never change.

“Community is really important to my team and I,” he went on. “We decided community is what needs to be not only the center of what we do, but also the center of our name. Our name changed to Coldwell Banker Community Realtors about 15 years ago. We knew franchises were going to come and we were getting tired of having to reinvent the wheel every time so we decided we would look into the best franchise out there. We settled on Coldwell Banker for a couple reasons- there is a long history of ethics and at the time they had been around for about 90 years.”

Returning to the subject of the talks that led to the acquisition and merger, both Goggins and Megliola said they came about because of the synergy between the companies, shared philosophies, and timing.

“One of the oddities of this sale was the fact that it occurred 40 years to the date of me starting the business — it was kind of like an anniversary and at the same time, a sale; it was kind of interesting,” said Goggins. “The main motivation is the fact I’m 74 years old and have been doing this for about 50 years. My wife kept kicking me and saying, “Come on — sell this.”

Moving forward, both Goggins and Megliola believe the combined names on the door, but more importantly what’s behind those names, especially the decades of experience in both the commercial and residential markets, will make the firm a force within the region.

“Brian is extremely energetic and with his approach to the business, there’s no doubt that he will blend our experience with his energy,” Goggins said. “And we’re going to see something emerge that is going to be right at the top of the agencies in this area.”

Megliola agreed, and noted that in order to build the brand, there will be a strong focus on growing the commercial side of his business, an assignment that should be helped by the Goggins name, but also Pat Goggins’ desire to continue building on the foundation he has laid over the past 40 years.

“I’m going to remain as active as I want to be, and I still find the work stimulating. I enjoy being engaged in it,” he said. “I’ve been very actively involved in it for 50 years so, I don’t have any plans of moving permanently to Florida — but don’t get me wrong, I will be spending time down there! It just seemed like it was the right time.”