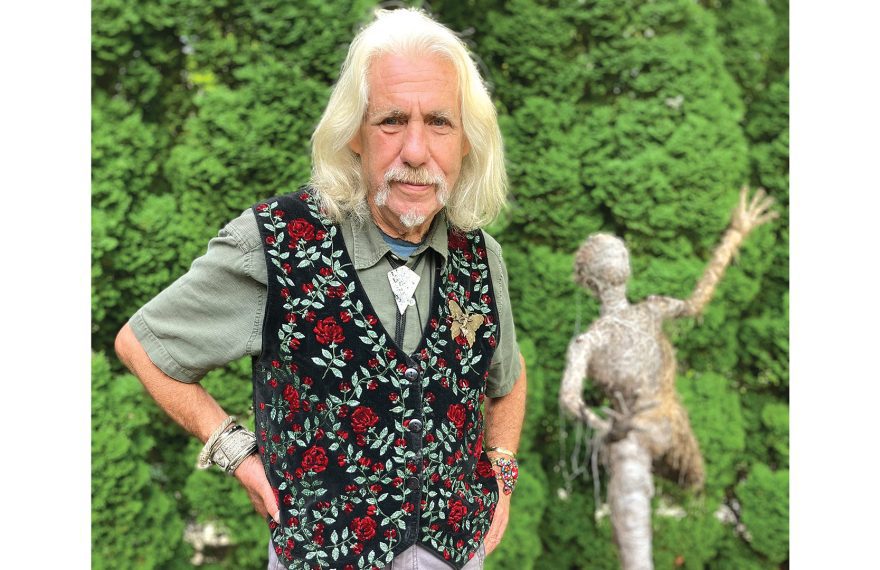 Where Art and Nature Collide 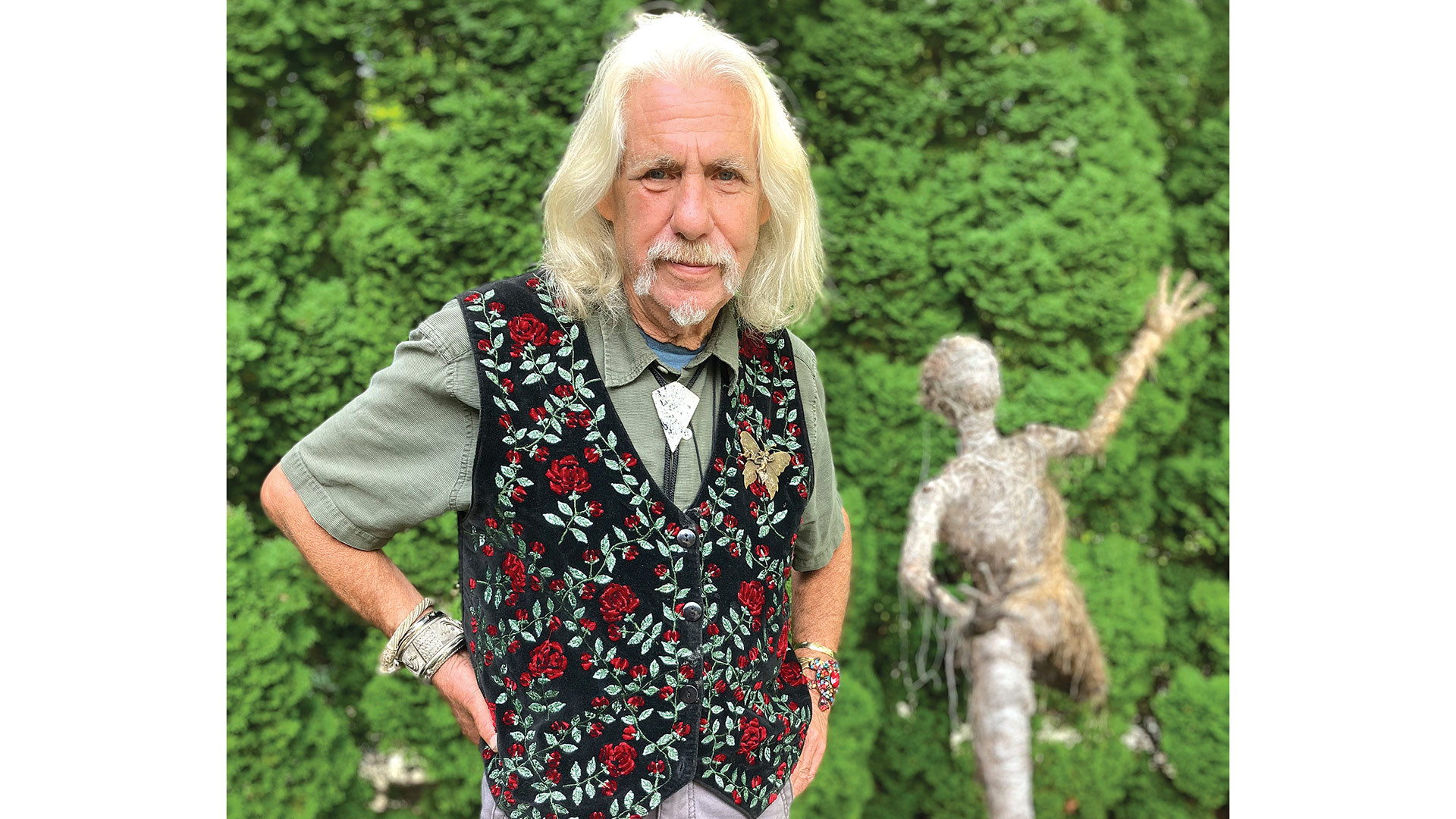 Richard Richardson, creator and caretaker of the Three Sisters Sanctuary in Goshen, likes to say that he has built his own world in what he called a ‘snow globe.’

“I live in a snow globe; I built the snow globe, I designed the snow globe, and I’m not done with the snow globe yet — this is the magic of it all,” said the philosophical and quite colorful Richardson. “Somehow I’m gifted enough to take nature and work with it to see it come to maturity in such a magical way out there.”

But the snow globe is not his alone. Indeed, it has become a popular stop for day trippers and others. It is a place to stop, reflect, take in beauty of various kinds, and, in many cases, grieve the loss of a loved one — which is where, in many ways, this fascination starts.

Cozy pockets along the trail invite visitors to stop and take it all in. It has been described, appropriately enough, as a place where art and nature come together.

Within and around the gardens are multiple art exhibits of sculpture, glass, metal, mosaics, found and repurposed items, and other materials. But each exhibit mainly focuses on its natural surroundings; most projects are composed of large stones, like “The Kiss,” but some projects include other natural materials like wood, such as “The Conception.” Perhaps the most intriguing piece in the sanctuary’s gardens is a giant dragon head made of stone, metal and glass; it is most known for breathing fire.

All of this has been derived from the vivid imagination and artistic mind of Richardson, who said he landed in “the land of Goshen” — a rural community northwest of Northampton about 30 years ago in a bread van when driving through for a job. Richardson said he opened the door, looked out, and instantly thought “if I could live anywhere, this would be it.” 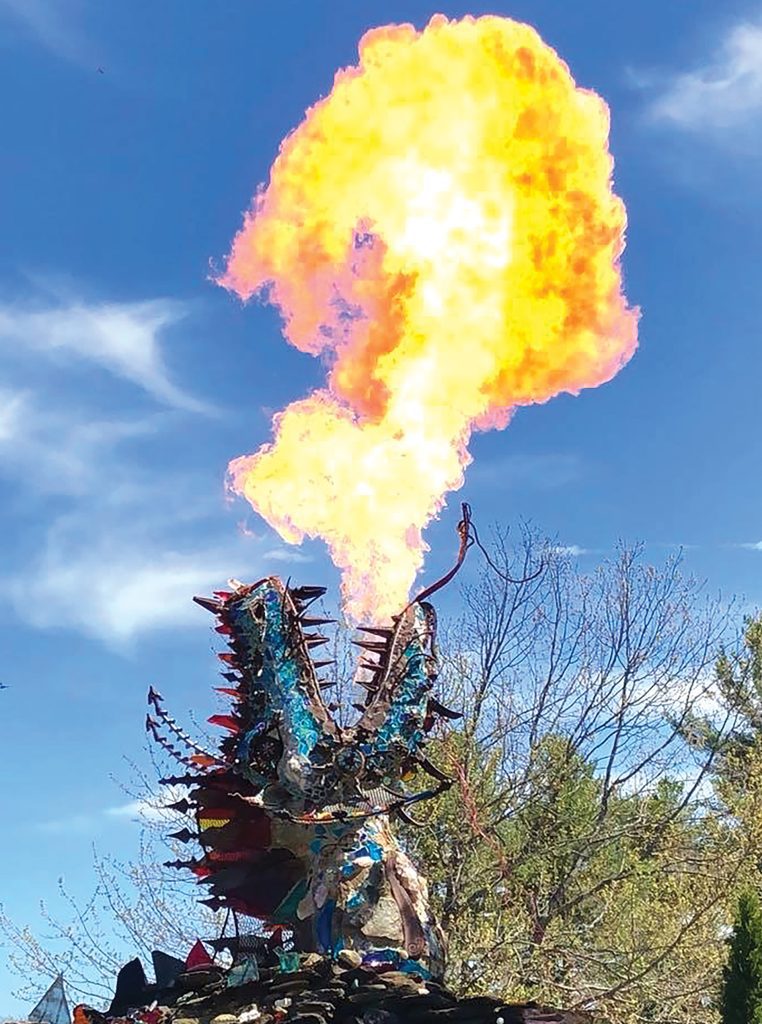 The fire-breathing dragon is just one of many works of art to capture the imagination at the Three Sisters Sanctuary.

And in three years’ time, he bought the land that the sanctuary currently sits on.

“Destiny played a major role in my life. This is the only house I ever thought of buying,” said Richardson. “It was very clear to me that when I purchased this piece of property, I didn’t know then that I had arrived. Where I was going to go from there, I didn’t know, but I had arrived.”

Years later, the sanctuary was created, but as gardens. Richardson’s brother was an avid gardener and close friend to him; he suggested to Richardson that he gardened to help grow through his grief.

“In the last year of his life, he said to me in order to deal with grief, he’d like to install three gardens with me. Each will be a perennial garden,” explained Richardson. “His hopes were that when the plants started to come back and he was gone, that I would continue to love, nurture, and care for these gardens.”

He went on to explain how his brother considered himself an annual, his life cycle was complete after death. The gardens were perennials, coming back each year to remind him that nature has a plan to help heal the soul.

Seven years later, Richardson found himself in a rut. He had been gardening, but they had become much more elaborate than he anticipated. He compared his gardens to English gardens — “well composed and too proper.”

“I had the reality check of realizing that my personality is one that could go much further than I ever thought I could go,” said Richardson. “And after seven years, I looked at my gardens and thought I wasn’t comfortable with myself. I had to be really committed to these gardens until I figured it out.”

Then his mindset changed: he wanted to hardscape. Hardscaping is another word for landscaping, but defines what an environmental artist truly is. They work with stone, trees, flowers, and the landscape to create something beautiful.

His first hardscape piece was a fire pit and waterfall to the right of his deck. He explained to BusinessWest that it was the first project he’s done that took control of itself. He usually plans ahead, and sets out a purpose for his pieces, but once he started building this feature, it kept dictating what it wanted to do next.

“It was a major piece because I didn’t know what or why I was building it,” he explained. “It allowed me to trust myself and it allowed me to realize that when you have an intuition, that overrides everything else. And that’s what was going on; I had intuition on what I was doing.”

Grief had led him to gardening and hardscaping once again — this piece became the final resting spot for his oldest daughter, Tina. He said he didn’t understand the meaning behind his first piece and to just spontaneously throw himself into a year and a half project speaks to the willingness to see where it would take him. Richardson said he was willing to see where the art would take him.

And that is how he came up with the name, Three Sisters Sanctuary. After the loss of his oldest daughter, he named the gardens to represent the bond of his three daughters: Tina, Sara, and Megan.

All three women were born and raised on the land now dedicated to the sanctuary. Richardson said that they have always “encouraged and contributed to the ever-evolving outdoor healing space since the beginning.”

Leave Your Baggage at the Door

Starting a new art piece means being in the trenches for three to 10 years, fully immersing himself in his art, Richardson told BusinessWest. One of those projects is his famous ‘Fyre Dragon.’

“The project had a funny feel to it because the dragon was so intriguing; it was so wonderful to build something like that — I mean come on, who gets the chance to build a dragon in their lifetime?” he asked rhetorically. “Especially when you don’t know what you’re doing, which is half the attraction to my art. I generally build things with the belief that I was meant to do it — I was meant to build that dragon.”

After the dragon was finished, he said that he was concerned that his work was finished. It was hard to look up when it felt like the end seemed so far. Richardson said it reminded him of the Frank Sinatra song, Is That All There Is? He was worried it wouldn’t hold the magic he anticipated, but the community proved him wrong.

Over the past 20 years, visitors have left trinkets and old toys surrounding the dragon head along the rock wall. “No matter where the eye draws you, there is another tiny piece of plastic to remind us all we’re still human,” Richardson told BusinessWest, “I get as much enjoyment going in and visiting all those characters as I did building it.”

Once a week, Richardson gets “dolled up,” and becomes this character he calls “Little Dapper Dad,” and purposefully looks for new trinkets and knickknacks visitors have left behind. A popular item to be found around the dragon’s trinket wall are little turtles that always seem to appear.

“If you were to go in and really study it, you’ll find the turtles; they’re a big deal. Don’t ask me where they’re coming from, don’t ask me what they’re about,” said Richardson. “I just know that the turtles play a big part in the dragon’s life — so do prayer cards, and people who just want to go in and say goodbye; they want to let go of something.”

He explains that the trinkets are often left by adults, not children. They have usually been to the sanctuary before and have had some time to think and process what to leave behind the next time they visit. The trinkets are more than just trinkets, he said — they’re a piece of the past.

When talking to visitors, Richardson urges them to leave their baggage at the entrance.

The sanctuary is a beautiful chaos that creates balance within itself. Each hardscape project allows not only the visitor to let go, but the artist himself. This was a place of closure, but also somewhere to watch something else bloom.

“I like being an artist — it’s like being a rock ‘n’ roll star; it’s the same damn thing. I can wear the clothes and the flash, and I have the hair,” he said. “And I work it, I’m a rock ‘n’ roll star all in the comfort of my back yard. The hardest part has been that I’ve made the conscious decision to share it with the public. I knew all along that once I opened Pandora’s box, I couldn’t close it.”

And with the pandemic, he has found he is sharing it with even people.

Indeed, in the early days of the pandemic, indoor gatherings were prohibited and people across this area and beyond found themselves looking for things to do outdoors, away from other people.

For many, a trip to the sanctuary filled that void. It was a safe destination, and one that enabled them to find some peace, quiet, art, gardens, and plenty to reflect on.

“When other people didn’t have outdoor events, it started to bring more traffic here; I can already see how much it’s changed things,” said Richardson, adding that with inflation and a looming recession, he is trying to come up with new ideas and events to include in the peaceful walk through the sanctuary.

“The humor in this is I have dyslexia, so everything I do is done ass backwards. So naturally, when I built the sanctuary, I built it ass backwards,” he said with a laugh. “Right now, I’m finally building a section for live events and workshops on the remaining two acres of land that I have. It’ll be separated from the sanctuary — so if there’s 100 people here for a workshop, they won’t be mingling with the other 100 people here to visit the sanctuary. They’re completely separate.” He is also planning on setting up a section for pop up tents if events or workshops run late, a fairy cottage where other artists can promote their work, and an airbnb at the sanctuary.

Summing up what the sanctuary has become, Richardson said that he has loved the land of Goshen so much that he allowed the rest of the world in, and he admits that it hasn’t always been easy.

“I’m one of those rare artists that don’t put on a show — the show goes on 24/7. People either love what I do or they don’t. But they do love it,” he said. “It’s like I’m Mr. Popular over here. I’m having way too much fun with my life and the character I’m living and the things I’ve created.”

In other words, life in the snow globe keeps changing. And, as he said, that’s the best part.