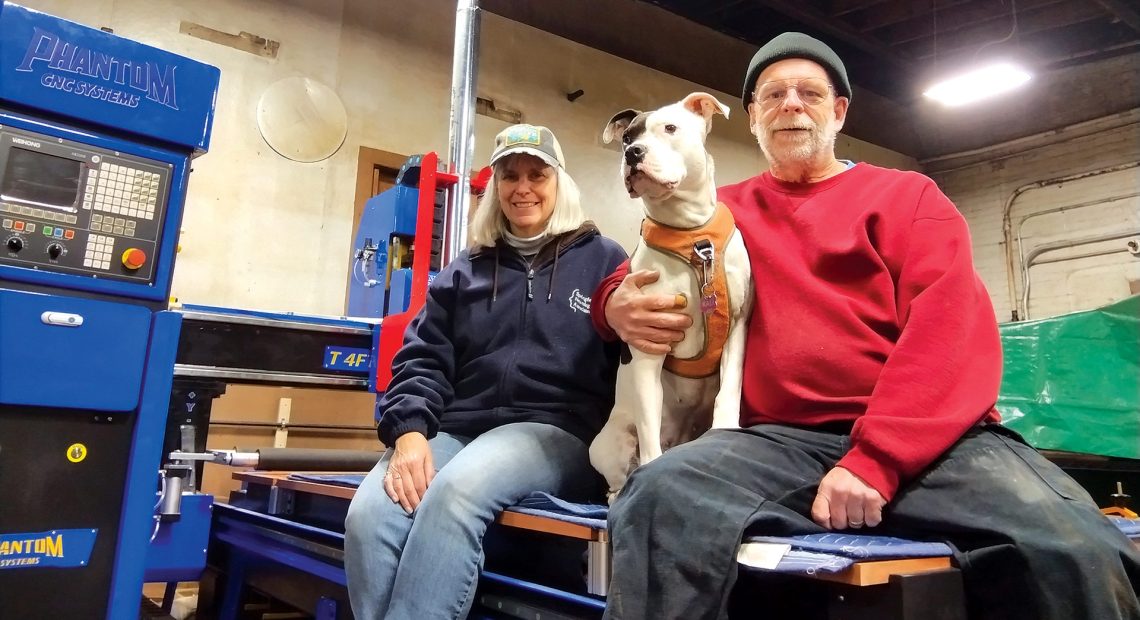 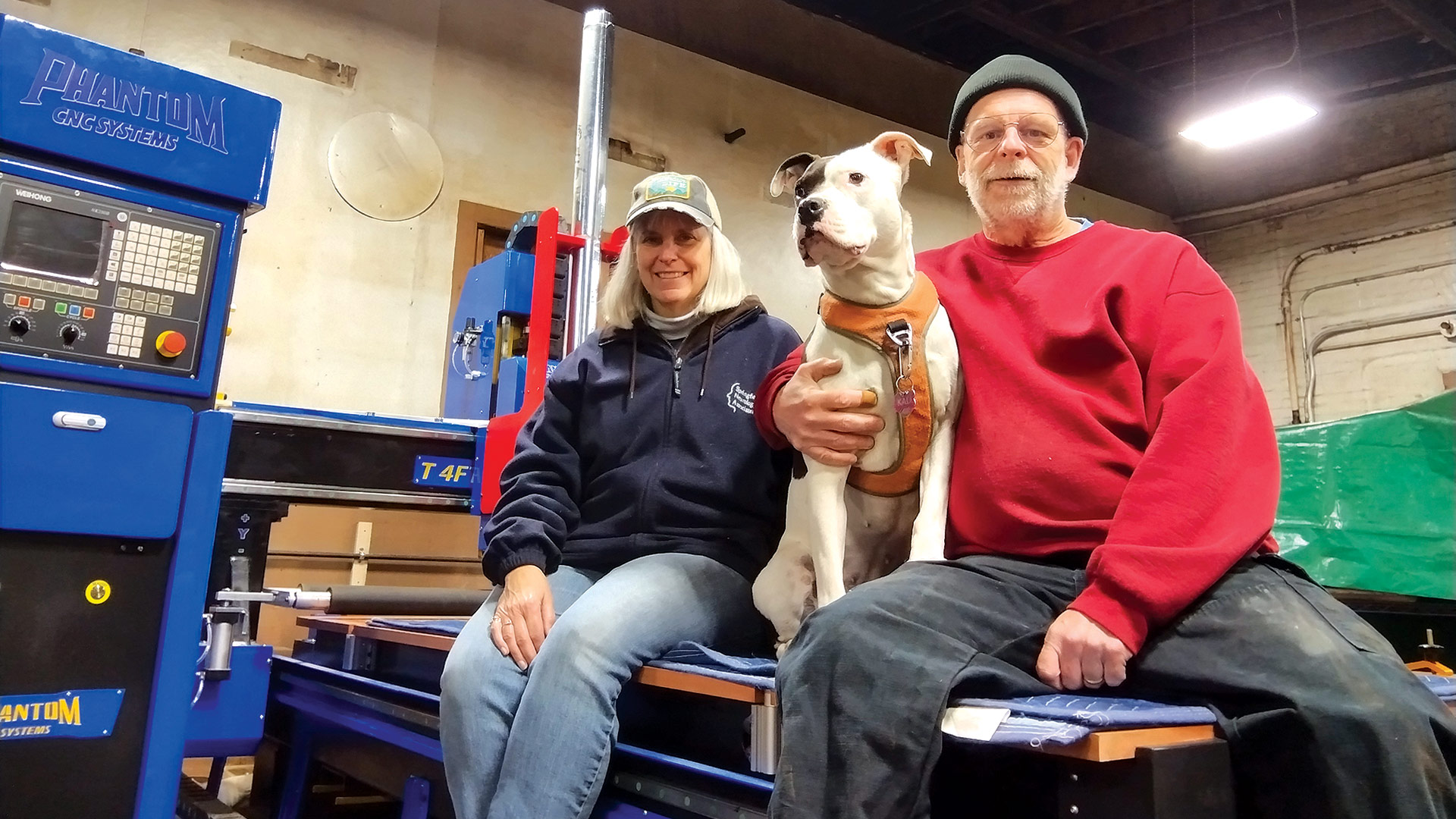 Tom and Pam Brogle work out of a small factory built in the 1800s.

Tom Brogle has had plenty of titles during his life: father, husband, secretary, boss. But he takes particular pride in being the owner of a small cabinet-making business.

“I remember a former employer who always said, ‘if it was easy, then everybody would be doing it,’” he said. “Owning a business is never easy. But at the end of the day, I feel good — tired, but good.”

Brogle is the founder and owner of Deerfield Cabinets and Millwork. Located in Greenfield, the business tackles both commercial and residential cabinetry and millwork. But he was eager to say he is not a carpenter.

Brogle originally “got hooked on woodworking” as a kid; his grandfather was an electrician and pushed him to pursue his interests. He went to a trade school where he took a carpentry and cabinet-making class, but most of his work revolved around the latter. Now, he’s been in the industry for 40-plus years, working for “just about every shop in the area, whether it be a closet place, store-fixture manufacturer, or millwork shop.”

His biggest motivation for getting out of the shops was his dislike for the way they treated their employees, and even customers.

“For most people, when they go to any custom shop, it usually means they have exhausted the options at the stores. They don’t have issues with cost, they’re probably tired of the usual stuff, and don’t want to replace it in five years or so. We will make it to last.”

So he started his own cabinetry business — his second business in the field, actually. His first business was located in Chicopee.

“My family has a business bug. I got bit by it on the first go-round over 20 years ago. I had about 15 employees at its height. Don’t get me wrong — every employee at that time I considered my friend. But I lost touch with my trade. I felt at times just a sort of babysitter. When you own any business and have employees, they need to be busy, or you are not doing it right.”

Deerfield Cabinets and Millwork (DCM) is different, he said, explaining that he wanted to pursue his passion, but not have to answer to, or worry about, anyone else. In short, he prioritized his happiness overall, and that lies in the work itself. 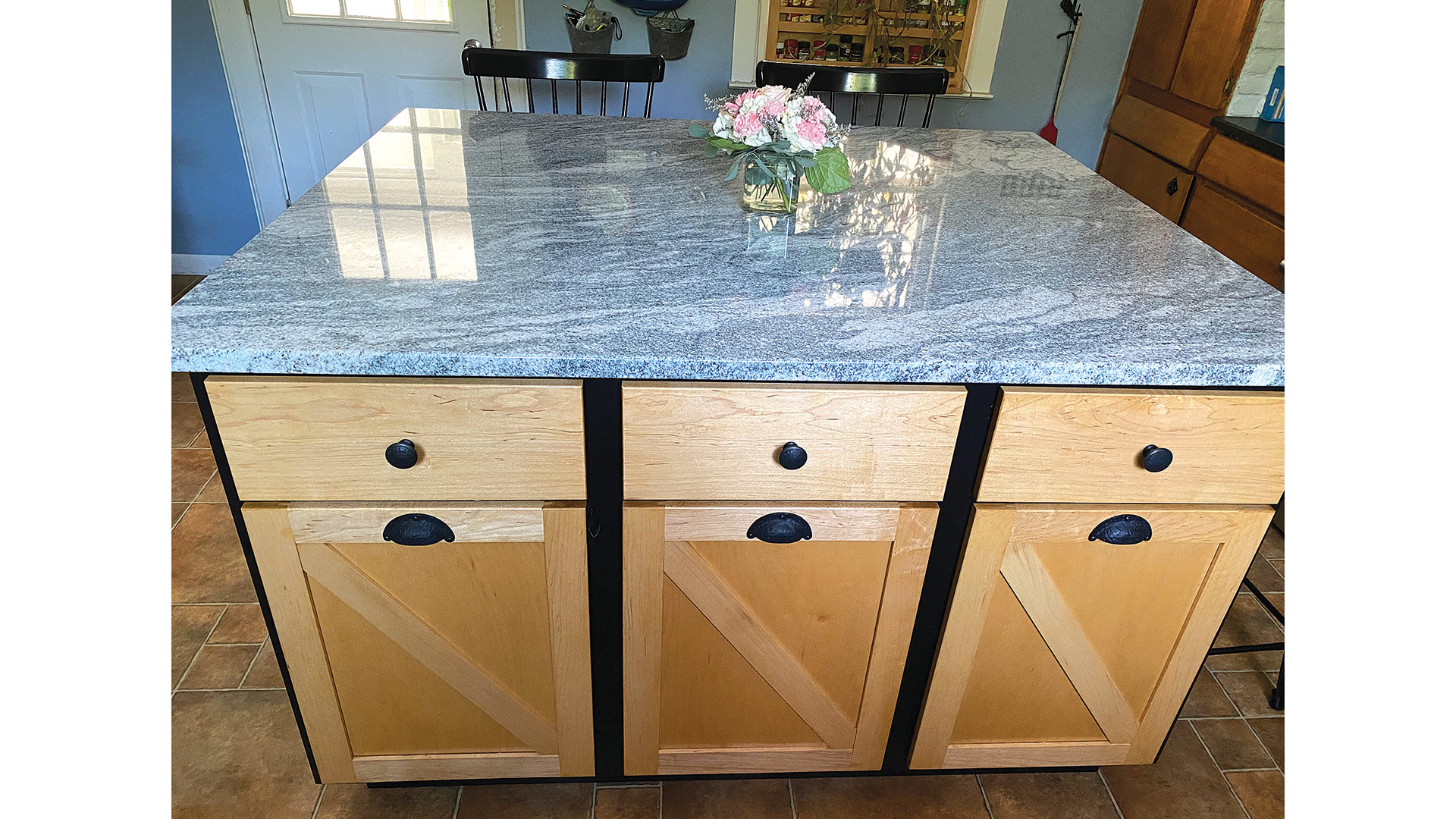 Tom Brogle says some repeat customers ask for another product before the first is delivered.

He does have one other co-worker, his ‘office manager,’ Kali — his four-legged best friend. Well, maybe not his best friend. “I owe a lot to my wife, Pam, who, against her better wishes, is always there when I need her.”

DCM specializes in cabinetry and millwork projects. Millwork can be defined as anything from making a kitchen to just crafting the molding that fits around the door. It ranges from a custom piece of furniture, like a desk, to commercial kiosks like those seen in a mall. Brogle makes pieces for businesses and residents all over the New England area.

“The repeat customers are there as long as you treat them correctly.”

“We really specialize in commercial millwork for other businesses. We love doing projects for hospitals and doctors’ offices. We have a regular customer that brings us projects for pharmacies,” he explained. “Those kinds of jobs are great. We also love working with general contractors; they are aware of many factors that go into any project.”

Products are made, finished, and delivered to the customer, but DCM doesn’t typically perform installations. Brogle told BusinessWest that the piece is usually left in the designated area, but he will do installations only if it is one cabinet that requires a few screws in the wall.

“For most people, when they go to any custom shop, it usually means they have exhausted the options at the stores. They don’t have issues with cost, they’re probably tired of the usual stuff, and don’t want to replace it in five years or so. We will make it to last.”

During the COVID-19 pandemic, Brogle was concerned for his enterprise, like other owners. He felt especially vulnerable, having been in business for only six months before the world shut down.

“I was very concerned about making it,” he told BusinessWest, and the worry is still there. There was little work, but still work to be done. He acquired a job for a Boston hospital, but it has been an on-again, off-again opportunity.

“When COVID hit, of course everything shut down. To this day, they haven’t asked for their project. I have it in the other room, and I’m still working on it. It hurt — but it didn’t hurt much because I was still in the infancy stage.”

He’s also had issues with supply limitations. Brogle explained that, if he needed a lift of plywood, the supplier wouldn’t sell the lift of 35 to 40 sheets; they, too, were losing out on money. “They would sell 10-12 pieces at a time so they can make more money. If you order a lift, they give you a big discount. They can’t take that price cut, either — suppliers would rather sell 10 here, another 10 there, and so forth. I’ve had to watch what I buy. And sometimes I just don’t get it — it’s just not there.”

Despite the setbacks of COVID-19 and the resulting economic disruption, his business is starting to see a rise in sales. He explained a new job opportunity he received with a friend; he’s building about 50 mall kiosks, and the client is requesting 30 to 40 more over the next year. 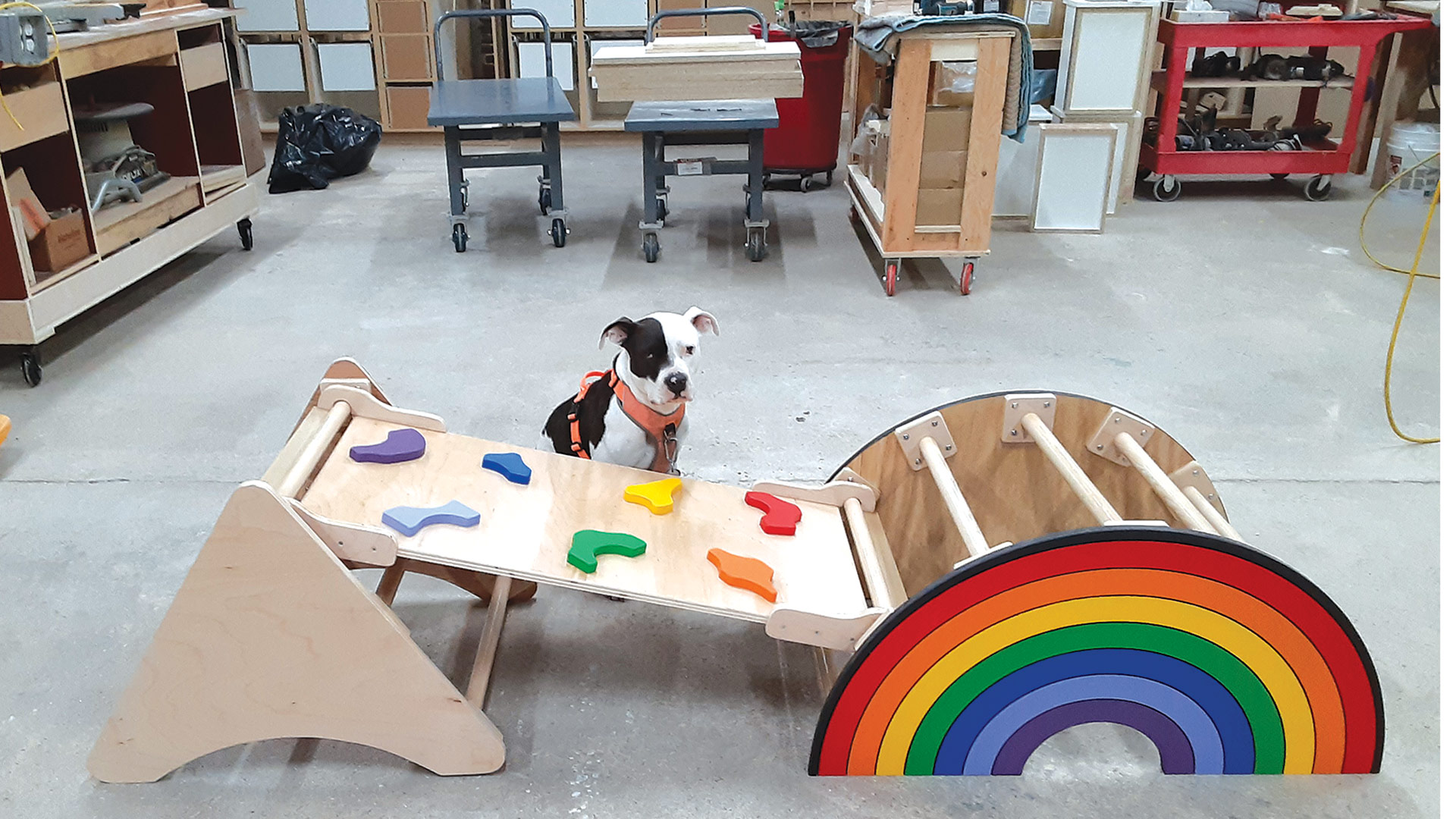 Kali the ‘office manager’ checks out a kid gym Tom Brogle made.

“It’s a big job for all of us — the repeat customers are there as long as you treat them correctly,” he said. “You can treat a customer pretty badly and think you’re doing a good job. But if they don’t come back or if they tell someone you did a lousy job, you’ll lose money. It might not be a lot, but you don’t get that customer back.”

Brogle added that he likes to work with his customers to make projects doable, especially for residential jobs. When quoting a job, he tries to honor the price if it is within a certain range of the original estimate.

Though there’s a lot of competition in his field, Brogle is excited for the future of Deerfield Cabinets and Millwork.

There’s no predicting what the next year or five years will bring, but he is hoping to hire people that are passionate about the trade.

“I don’t have that crystal ball and all the answers, but this I do know — life is only what you make of it,” he told BusinessWest. “You can either be noticed or sit on your butt the rest of your days. And this is my trade.” 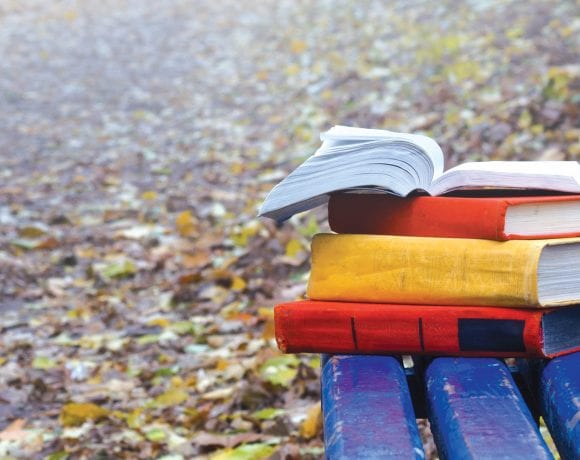 The Region’s Colleges Are Moving Closer to That Goal 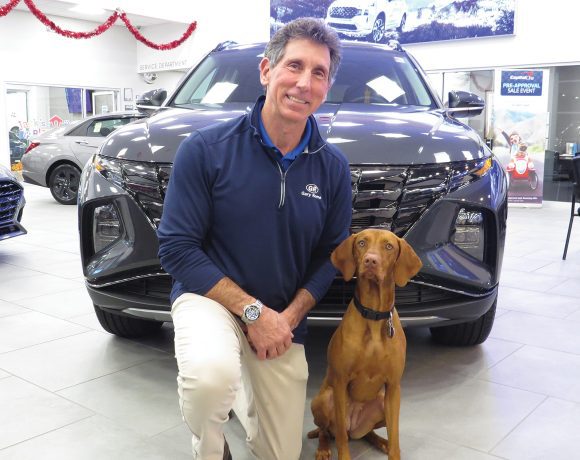