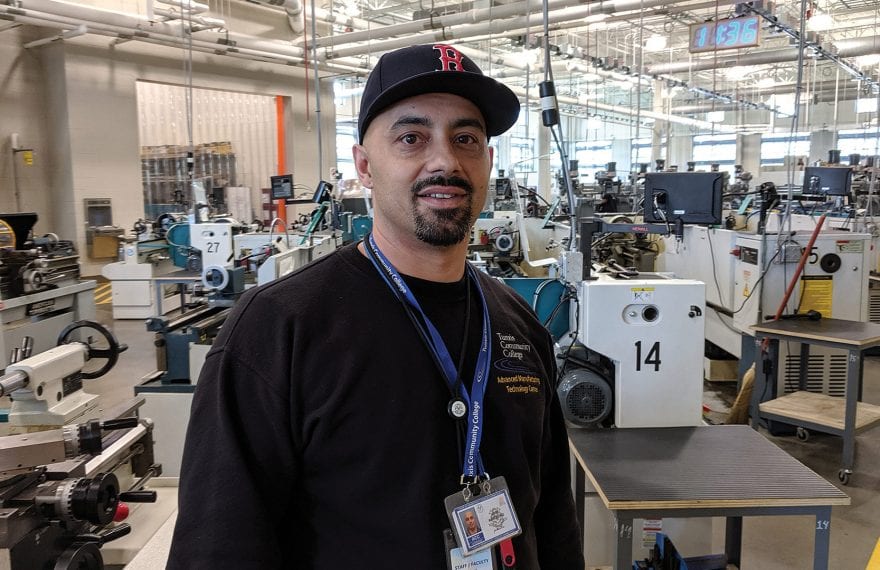 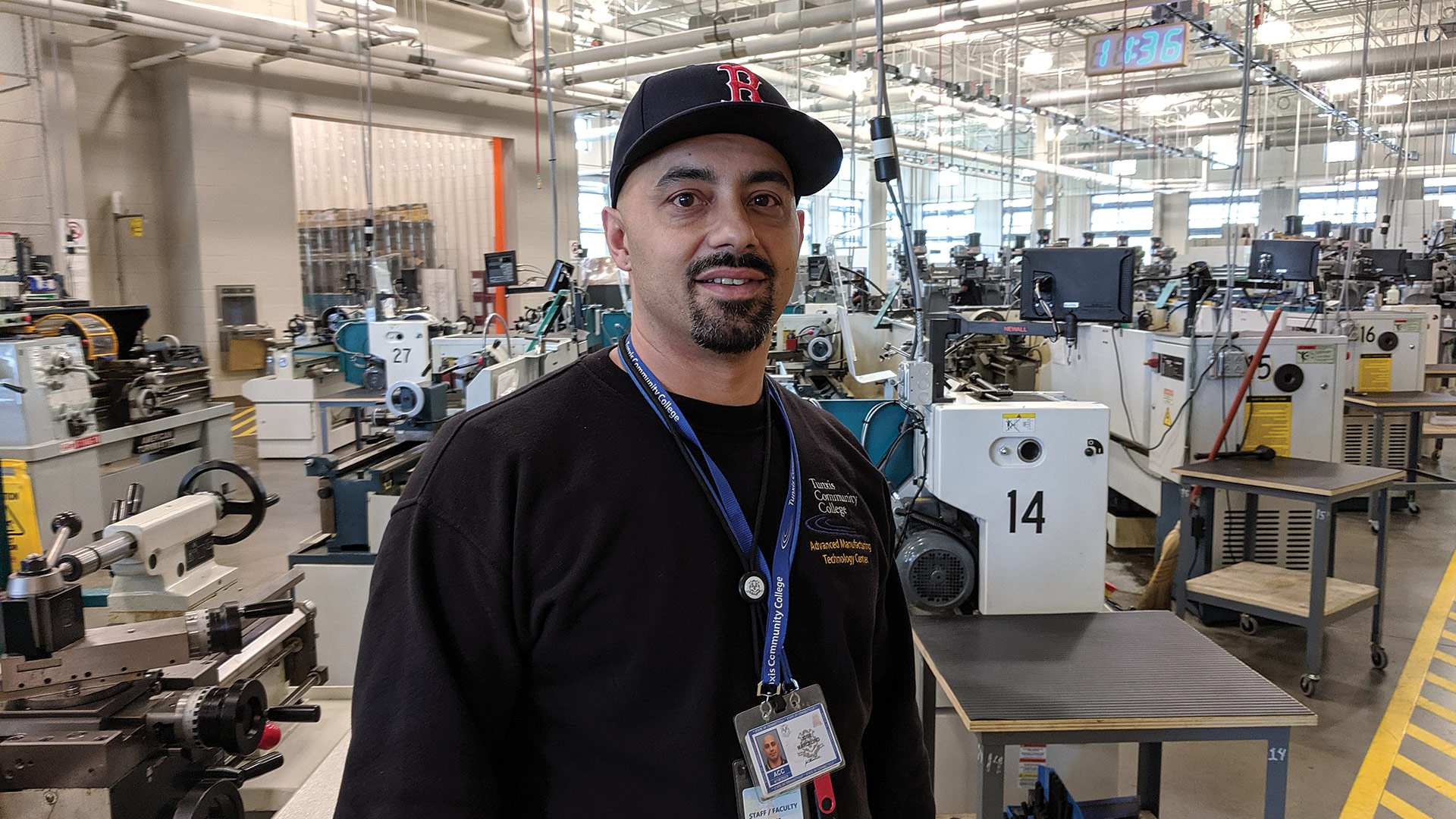 Joe Marcelino with some of the 90 devices on the machining floor of the center’s 2017 expansion.

With much of the manufacturing workforce starting to age out and a dearth of young people entering the field, companies have been struggling for some time to find the skilled employees they need to grow. One successful model changing the equation is the Advanced Manufacturing Technology Center at Asnuntuck Community College, which is placing students with a one-year certificate to work in good-paying careers — while meeting area companies’ critical talent needs. It is, in short, a true win-win.

When Joe Marcelino spoke to a group of Hartford Public High School students recently, he came armed with some numbers — and a common-sense pitch.

Among the numbers was the starting salary for students who earn a one-year certificate at Asnuntuck Community College’s Advanced Manufacturing Technology Center (AMTC): typically, in the $45,000 to $50,000 range, and sometimes higher.

“I stressed to them that the opportunity coming through our program is priceless because a lot of the manufacturers actually pay for their continued education,” said Marcelino, an instructor at the center. “So not only do you come out of our program with a decent income, but you have the opportunity to go to school at night without debt — and student debt really follows you.”

The main pitch, of course, is the job itself, and how the center has partnered with manufacturers — in both Connecticut and Massachusetts — to create work opportunities for both young people and career changers, and address what has been a persistent lack of qualified employees these companies need to grow. 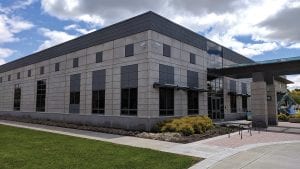 “We can almost promise you a job coming out of our program,” Marcelino said, “while if you get a four-year degree in, say, English, you might not have a job coming out — but you’ll have all that debt.”

The Advanced Manufacturing Technology Center at ACC has been around for 20 years, but it received a major overhaul two years ago with the opening of a 27,000-square-foot addition, more than doubling its space. It includes an 11,000-square-foot machining lab with 90 computerized numeric control (CNC) and manual machines, an additive-manufacturing lab equipped for both plastic and metal 3D printing, a metrology lab featuring computerized measuring machines, and state-of-the-art computer labs — and a whole lot more.

“I stressed to them that the opportunity coming through our program is priceless because a lot of the manufacturers actually pay for their continued education.”

But the center’s most impressive offering may be those partnerships with area manufacturers, who have guided ACC in crafting the certificate program as a way to get skilled workers in their doors.

“With manufacturing booming in Connecticut again and all over the world, demand for skilled labor right now is really high,” Marcelino said during a recent tour of the facility with BusinessWest. “When I was in high school 25 years ago, a lot of the counselors and teachers were deterring us from getting into the trades. That’s partly why there’s such a shortage now in the industry.

“A lot of contracts are being signed by some of our largest manufacturers, like Pratt & Whitney, Sikorsky, and Electric Boat,” he went on, “but because of what was happening 25 years ago, there’s a shortage now because a lot of people are leaving the industry and there’s nobody qualified to fill these positions.”

Normally, advanced manufacturers are looking for people with three to five years of experience. But ACC students are interning during their second semester and being hired for jobs immediately after, at good salaries. The reason is that the curriculum is customized according to industry needs. 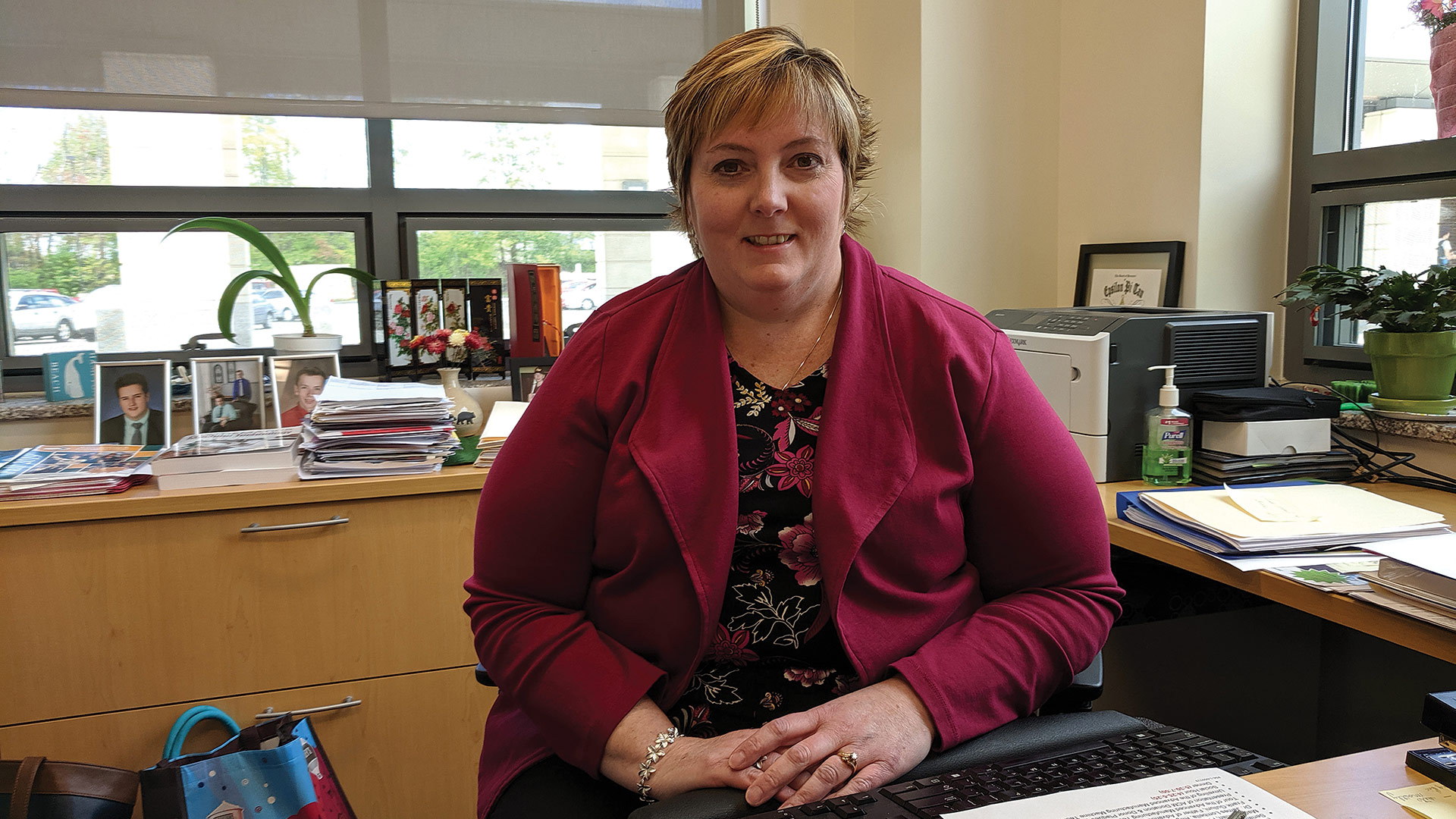 Mary Bidwell said the national conversation is changing around student debt and careers — like many in manufacturing — that don’t require massive loads of it.

And that foundation, he explained, is something companies can build on, hiring certificate holders, further training them up, and often providing additional education opportunities along with that full-time paycheck.

“A lot of the companies we partner with pay tuition reimbursement, so it’s a real win-win,” said Mary Bidwell, interim dean of the AMTC. “You can get a certificate, start working, and chip away at a degree.”

That makes sense at a time when exploding college debt has become a worrisome economic drain, and a national story.

“The conversations are changing,” she said. “You don’t need all that debt. You can do this and still get that engineering degree later; a great engineer still needs the hands-on training in how a part is made and what the machines can do. In fact, engineers come here to take classes.”

And that certificate doesn’t even need to result in a job on a manufacturing floor, she added, noting that some have used the training, and continued education, as a springboard into manufacturing sales, teaching, and management, to name a few pathways. “We give them a good, rounded foundation where they can get a career and then grow from there.”

While perceptions are changing about today’s manufacturing floor, Bidwell said, there’s still some work to be done to get young people — and their parents, who grew up with different ideas — interested.

“A lot of parents, when they think of manufacturing, think of a dark, dingy, dirty environment, so when they hear their kids want to go into that, they say, ‘no, don’t do that.’ They haven’t seen manufacturing as it is today. It’s very clean and technology-driven. And from where you start to where you can advance is unbelievable.”

That’s the message ACC is sharing not only with parents, but with guidance counselors and teachers, some of whom are invited in during the summer to see the facility and learn about career opportunities. “It’s about educating the people who educate the students,” she explained.

Those efforts are working. While student ages can range from 18 to 65, the average age at the center during the Great Recession, when many more people were looking to switch careers, was around 45. Today, it’s 28. 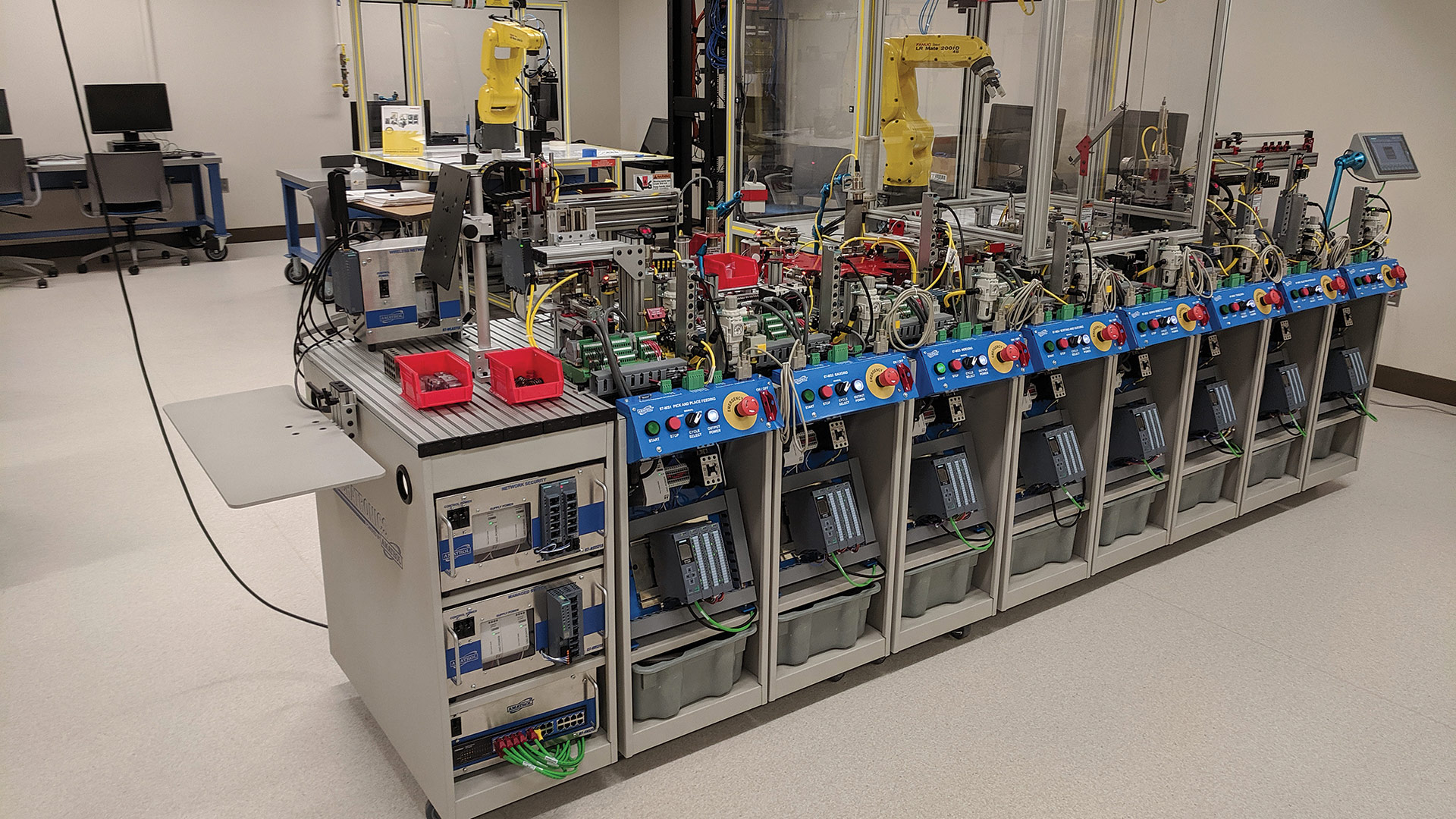 The center’s mechatronics lab gives students experience in the growing world of robotics.

“We give them a great foundation to build upon,” Bidwell said, “and the pathway is there to do whatever they like.”

That foundation begins with a hands-on approach to learning the machinery and techniques — from 3D printers, lathes, and surface grinders to welding and robotics labs, Marcelino said. And it’s a healthy mix of manual and CNC machines.

“The companies tell us the students still need to know the old-school skills; they need that foundation in order to make the transition into the CNC world, which are machines you write a program for in a computer, and then set up the machine to run the part for you. You need to know both ways.

“There’s no such thing as close enough in this industry,” he added. “The parts have to be made right. Precision is precision. I like to call this a work-ready program because our job is to get them the skills to get them a job.”

“We’re really high on attendance and punctuality because that’s what the employers say is the biggest issue they have,” he said. “The other big issue we’ve been encountering is cell phones. Cell phones are a big distraction. We don’t allow them in class or in the shop. Some employees don’t even want them in the building, so we implement that here.”

Those second-semester internship opportunities — two days a week, with the other three days spent back at Asnuntuck — are based partly on grades, but mostly on attendance.

“The employer gets to feel out the student, and the student gets to feel out the company, and they’re getting a real training in what they’ll be doing,” Marcelino said. “Ninety percent of the time, that ends in a job offer. So we’re doing a lot of the training for the companies, and that’s what the companies are looking for. When they hire off the streets, the employees don’t always get it.”

Even in a healthy economy, the AMTC still attracts a good number of mid-life career changers who see opportunities they don’t have in their current jobs. Meanwhile, high-school students can take classes at ACC to gain manufacturing credits before they enroll, and a second-chance program gives incarcerated individuals hands-on experience to secure employment once they’re eligible for parole.

It all adds up to a manufacturing resource — and, thus, an economic driver — that has attracted plenty of public funding from the state and from Aerospace Components Manufacturers, a regional nonprofit network of aerospace companies that has long supported the center’s mission, most recently with a $170,632 donation on May 15. The investment arrives, Marcelino said, because the results of the program are evident.

“Students aren’t going to learn everything, but they’re going to have that foundation they need to make an impact right away in the industry,” he explained. “They’re getting the basic skills. There are programs out there that specialize in this or specialize in that. But in our program, we’re giving them a little bit of everything.”

From what he hears from companies that partner with ACC’s Advanced Manufacturing Technology Center, Marcelino doesn’t expect any dip in opportunity for students — young and old — who want to explore the modern manufacturing world.

“We can’t keep up with the demand employers have, which is a good problem to have,” he told BusinessWest. “We just need to keep getting the word out about the opportunities in manufacturing. People think, ‘manufacturing, oh, it’s dirty, oily, stinky,’ but times have changed. Technology has changed. And as technology changes, more doors open. The medical industry for machining is booming right now.”

That said, it’s not an easy job, although, for the right candidate, it is a rewarding one.

“They have to want to be here. It’s not for everybody, and you’ll get out of it what you put in,” he said. “I’m a firm believer that the program works, but you have to want it. But the ones that do, they take off. It’s phenomenal what they do.”