From EVs to Inventory, Auto Dealers Roll with the Changes 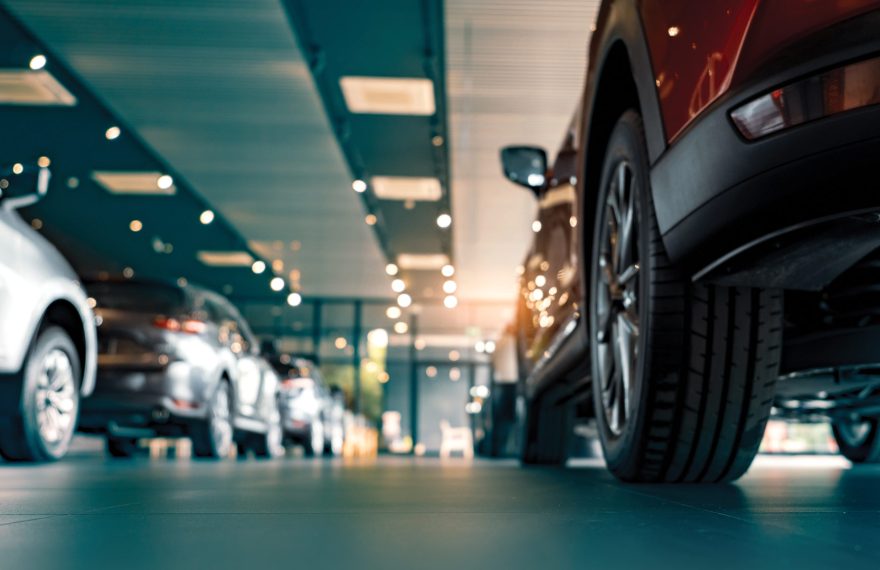 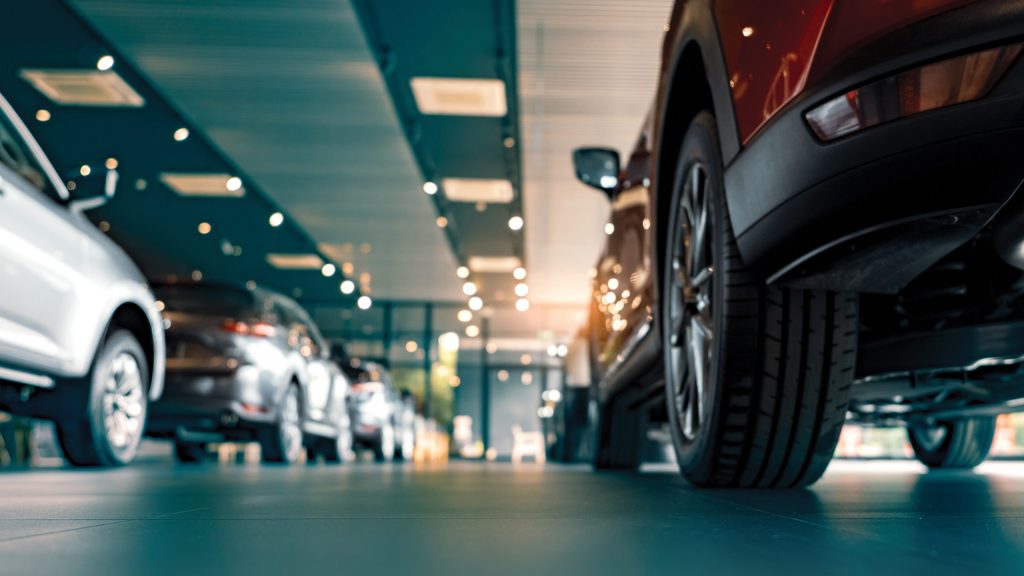 That may seem like a reasonable goal locally, she added, but manufacturers aren’t just building cars for Western Mass.

“We’re in a much different market than a lot of others. In our market, there’s a ton of electric infrastructure and high demand for electric vehicles, but I’m not sure what that looks like in other parts of the state or the country. And I think the infrastructure has to be there to make it realistic.”

“There’s are state and federal rebates on these vehicles, which make them more attractive,” he explained. “You’ll pay more for an electric vehicle, but if you drive a lot, an electric vehicle pays for itself in short order. The metric is $1.25 per gallon to pay for electricity, versus $4 a gallon. We’ve had people trade in their gas-guzzling pickup truck, and they’re saving hundreds a month in fuel alone.”

About 15% of Rome’s sales are electric vehicles, which he estimated is about three times the national average, with the hottest model being the Hyundai Ioniq 5, which MotorTrend named the 2023 SUV of the year, among other accolades.

“We’re seeing a trend of manufacturers focusing more on electric vehicles than ‘ICE cars’ — internally combusted engines,” he told BusinessWest, though there’s still some hesitancy among motorists to try one. To that end, Gary Rome Hyundai is one of five dealers in the country offering a subsciption program, allowing customers to rent an electric vehicle for 28 days, including insurance, to see if it fits their lifestyle. 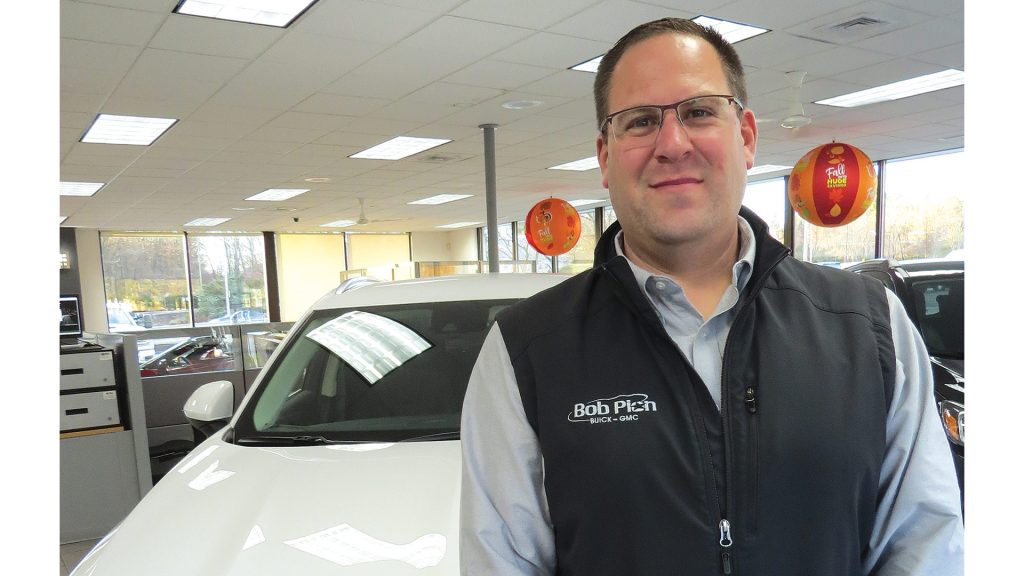 Rob Pion says the industry’s inventory issues eased in 2022, but it was sometimes challenging to have the right inventory in stock.

“The adoption of electric vehicles is all about educating the client, and a lot of folks have range anxiety; they’re afraid of running out of charge,” he explained. “But you wouldn’t leave the house with an empty tank of gas without thinking, ‘where am I going to get my gas?’

“The range in our vehicles is quite extensive, about 308 miles. That’s plenty of driving time if you have a charger, and most utilities have a $500 or $1,000 rebate that will allow you to offset the cost of putting a charger in your garage. You plug it in, and the car is charged in four hours.”

In addition, EV drivers become familiar with other charging stations; Rome offers six at the Holyoke store, including two ‘superchargers’ that can fill a battery to 80% within 18 minutes.

Bob Pion Buick GMC is getting into the EV game as well, said General Manager Rob Pion, noting that GMC will be introducing an electric Hummer pickup and Hummer SUV by the second quarter of 2023, and an electric Sierra Denali pickup by 2024, while Buick is planning to go all-electric in the near future.

“That’s definitely coming,” he noted. “Electric is hitting our store. We haven’t had any experience with it up to now. In the next three years, we’re going to have a plethora of electric vehicles on the lot here to offer customers.”

Some customers are excited about the electric options, but others have reservations — for instance, what if the electric grid is strained, as it has been in some areas of the country, where people were told not to turn their AC on during certain hours?

“So now I’ve got an electric car charging at the house, taking as much power as that,” Pion said. “I’m looking at electric as a great option, but I share those concerns — is the infrastructure there? 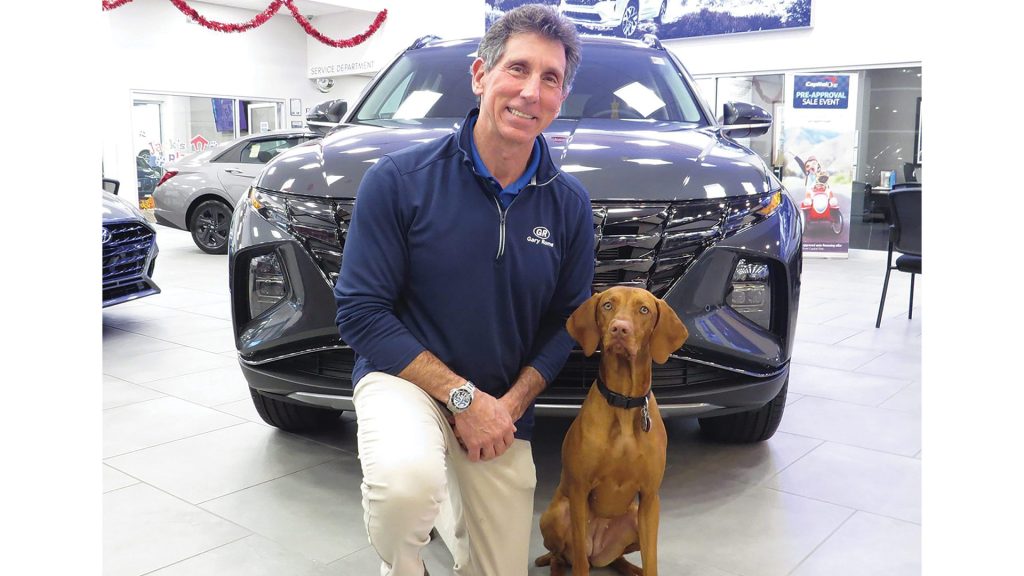 Gary Rome says customers will become more comfortable with electric cars as they deal with their “range anxiety.”

“But I do think it’s an exciting time, and there’s a future in it, even if it might not be right for everybody,” he added. “It’s definitely a conversation that goes on every day with customers.”

Rolling In, Rolling Out

Electric vehicles aren’t the only trend shaking the auto-sales industry lately. Through the latter half of the pandemic, inventory was a major problem as buyers swarmed onto lots much faster than manufacturers ramped up production after 2020’s dramatic slowdown. That problem is easing, to an extent.

“It’s a strange time in the auto industry,” Cosenzi said. “It’s so hard to predict right now, with so many different moving pieces constantly. We have been really fortunate; we have managed to keep a steady supply of inventory, so actually, it’s been a very good year for us. All our brands are doing really well.”

TommyCar’s used inventory has been healthy as well, she said, particularly the certified used inventory that comes with a warranty of three years or 100,000 miles. Because the company relies on market pricing at a time when used vehicles are in demand, both trade-in figures and sales prices are up.

“Business has been better than the past five years,” Cosenzi said, adding that low-but-rising interest rates have been a driver. “A lot of people who wouldn’t have been shopping for a new vehicle have upgraded to new vehicles.”

Pion noted that 2022 wasn’t quite as profitable as 2021, but with a month of business left in the year, sales have been healthy.

The inventory situation has definitely improved, he said, but getting the ideal mix of inventory can be an issue. “There’s more inventory than there was, but the challenge is getting the right inventory — you might have a half-dozen Buicks on the ground that are front-wheel drive, not the all-wheel drive customers might be looking for,” he explained.

“A customer can go online and find the exact car they want, and they can get their payment and interest rates right online. It really helps the customer to gauge what they’re looking for when they come into the dealership. It also helps us, as the dealer, make the best use of the customer’s time. The process becomes very efficient.”

“And this is another year end where the heavy-duty pickups are very, very difficult to come by. A lot of companies are looking for that end-of-year write-off for heavy-duty trucks, but they’re up against it this year. Even though there’s inventory, the inventory out there is a little bit of a hodgepodge, and not always what customers would want. I don’t know that I see that getting better anytime soon.”

Which is challenging at a time when customers often walk into dealerships knowing exactly what they want, with little flexibility, thanks to the information available on the internet.

“We’re very far from the time when a customer walked in the door looking for a $35,000 vehicle, asking, ‘what do you have?’ Instead, they come in and say they’re looking at a 2020 Buick Envision, pre-owned, stock number X, asking to pay Y.”

Cosenzi agreed. “Look how much technology has changed the automobile business — a customer can go online and find the exact car they want, and they can get their payment and interest rates right online. It really helps the customer to gauge what they’re looking for when they come into the dealership. It also helps us, as the dealer, make the best use of the customer’s time. The process becomes very efficient.”

Meanwhile, the used-car market has come down a bit from the low-inventory, high-price times of late 2020 into 2021, Pion said. Not that the values are that much lower.

“If you bought a heavy-duty pickup truck within the last couple of years, you’re able to return that truck today and get almost what you paid for it — if you can find a new one, because there’s such a shortage there,” he noted, adding that used-car inventory has also been affected by rental companies that sold off some of their fleets during the pandemic’s peak and then bought up huge numbers of cars afterward. 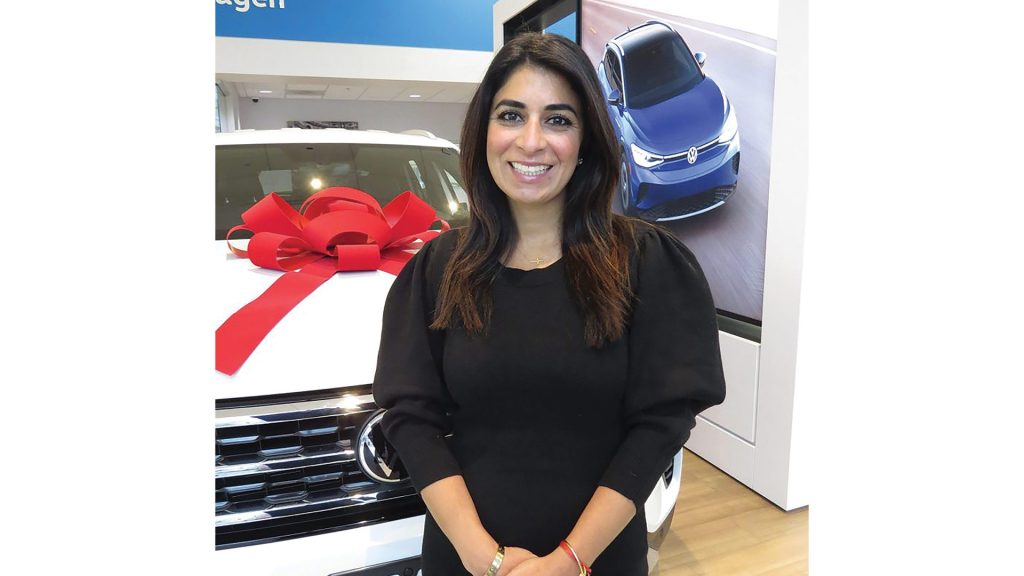 While it’s not easy to predict what the coming year will bring, Carla Cosenzi says, her dealerships posted strong sales in 2022.

“There’s still a lack of used inventory out there, and what is out there is worth more than had the market stayed status quo from three years ago,” he went on. “I would love to say there’s light at the end of the tunnel. We have inventory, don’t I think we are there yet. For the average person, it might not matter. But some businesses are really hurting, not getting the vehicles they need to actually do their jobs.”

Rome said the inventory issue is definitely easing. “We’ve done a very good job the past couple of years pre-selling our inventory, so they sell extremely quickly, and because we sell so many, we get more, and we’ve been selling them all over the country,” he said, citing states as far south as Florida and as far west as Colorado. “Folks have purchased their new cars from us; they either come here to pick them up, or we’ll deliver to them.”

All this considered, Rome said the outlook for 2023 is bright. “I think the manufacturers have had a vacation from having to spend money on incentives and rebates, and I think they’ll realize, as inventory accumulates and cars are more available, they need to add an appropriate amount of incentives to all the cars and offset any clients’ concerns about huge interest rates; they may offer a lower rate and rebate.”

His sales figures back up his general optimism, as Gary Rome Hyundai ranks fifth in the region from Maine to Virginia, comprising 169 dealers. “We’re definitely selling cars like crazy.”

Looking ahead, and judging by the plans of manufacturers, more and more of those cars are going to be electric.

He doesn’t worry too much about the public’s adoption of EVs, especially in Western Mass., where there’s a strong level of environmental consciousness and a good number of people who have already driven hybrid and all-electric vehicles.

“There’s already a market for the car out there, from people who are into reducing carbon footprint,” he said. “We’ve had people come from the Leverett area and the Berkshires, who already have solar in their house, a battery-operated lawnmower, a battery-operated bicycle — a lot of people are already in the fold.”

Cosenzi isn’t sure if Americans in general are ready to go fully electric, but she wouldn’t be surprised if more people start to move that way, whether driven by emissions concerns, long-term cost savings, or other reasons.

“If somebody is not ready to make full jump right away, they have the option of a plug-in hybrid,” she said. “I have a plug-in right now — it’s not 100% electric, but I love it.”