The GMC Sierra Puts Assumptions About Pickups to Bed 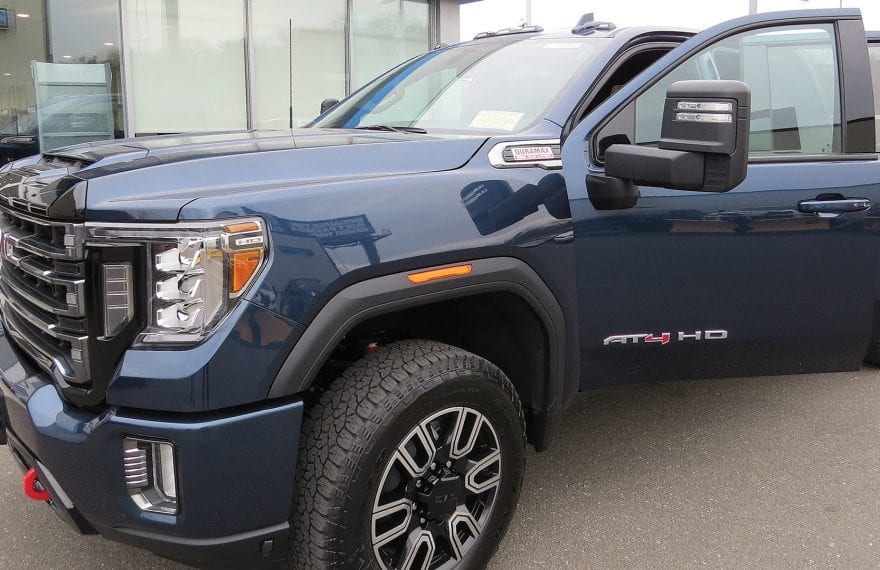 Editor’s Note: This is the third installment of a new series for BusinessWest — car reviews of a sort. These are first-person looks, and some commentary, about some of the vehicles — and issues — that are, let’s say, in the news. 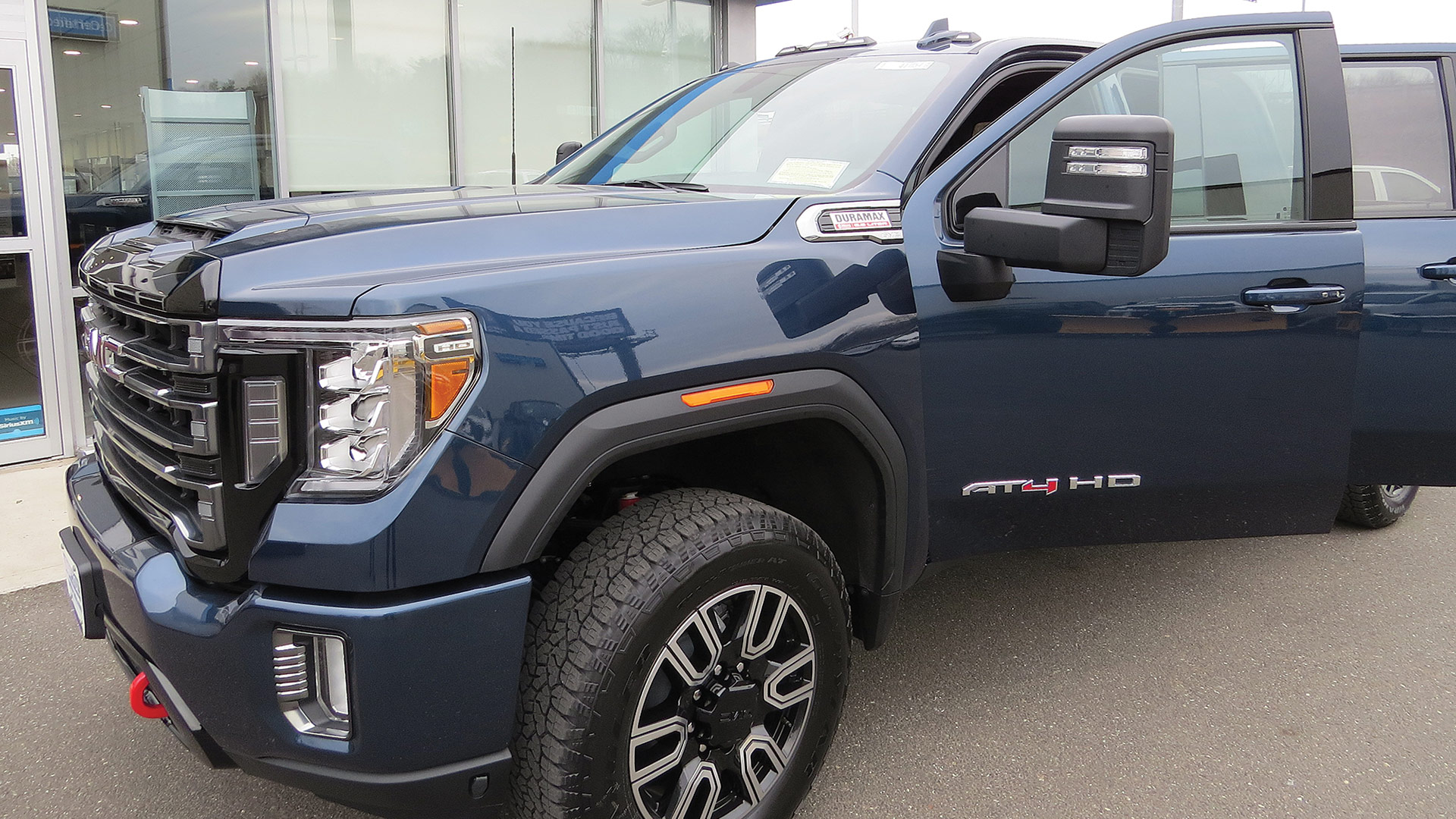 The GMC Sierra 2500 is one of many models that have become popular with people who not only use such a vehicle to work, but those who just want to drive a truck.

Remember that scene from American Graffiti?

OK, that doesn’t narrow it down, does it? There are lots of good scenes to remember, and lots of good lines, too. (I recall my first semester at UMass in 1975 when I was only 17 (drinking age was 18 back then); I must have told the bouncers at the Blue Wall a dozen times that I lost my ID in a flood. And none of them were creative enough to reply, like the old wino in that famous package-store scene, “I lost my wife, too; her name wasn’t ID, though.”)

I’m talking about the scene where the nerdy character (I forget his name) played by Charles Martin Smith, the one who lost his ID, is driving down the main drag in the handsome ride borrowed from Ron Howard’s character (I forget that name, too.) Anyway, two guys out cruising the strip come upon this vehicle and say, “that can’t possibly be you in that gorgeous car, can it?” — or words to that effect.

I thought of that line as I was out reviewing/test driving the 2020 GMC Sierra 2500 HD. People all along Route 57 were probably thinking, “that can’t possibly be you in that huge, gorgeous pickup, can it?” The suit and tie certainly didn’t help, but beyond that, this was a classic mismatch.

Perhaps never in the history of motorized vehicles has a driver seemed less suited to what he or she was driving. (Wait, there was Mike Dukakis in that tank back in 1988. If you missed it, Google it; the ad pretty much destroyed his presidential campaign.)

OK, I’m exaggerating about this mismatch thing, but not really. I can spell drywall, but that’s about it. Electric work? I’m like Michael Keaton’s character in Mr. Mom; when asked if he plans to use 220 volts in an addition onto his house, he replies, “220, 221, whatever it takes.”

“… it brings the best of two worlds — the truck world and luxury-car world — together, which is why it is appealing to people who need their truck to work, and people who don’t.”

I look more like Charles Martin Smith than Charles Martin Smith does. So what am I doing in a Sierra 2500? Reviewing it, that’s what, and maybe also dashing some cold water on the notion that pickup trucks are for … well, the kinds of people who have historically driven pickup trucks, especially as they become more well-appointed and look and feel more like cars — in this case, luxury cars.

Indeed, this 2500 has leather, heated seats, a heated steering wheel, ventilated front seats, Apple Carplay and Android Auto, a power sunroof, wireless charging, a Bose premium sound system, and a lot of other things you would expect to find in a luxury car. But it also has a Duramax 6.6-liter turbo-diesel engine, a six-foot bed, a GMC ‘Multipro Tailgate’ (more on that later), and the ability to tow between 14,500 and 18,500 tons of whatever you want to tow, depending on configuration.

In other words, it brings the best of two worlds — the truck world and luxury-car world — together, which is why it is appealing to people who need their truck to work, and people who don’t, said Shaun Cummings, commercial manager at Balise Chevrolet Buick GMC.

“We’re seeing everyone from the family man or woman to the contractor to the lawyer getting into trucks today,” he said, noting that this is especially true with the 1500 model. “And that’s because they’re not just trucks anymore; they have air conditioning, wireless charging, sunroofs, heated seats, and they continue to add things.”

Even business editors are giving them a look — in this case a detailed look that helps bring the broadening market for this model, and seemingly all pickup trucks, into perspective.

While out driving this pacific blue metallic Sierra (cool color), I was thinking not only of Charles Martin Smith and his character, but Sister Mary Caritas, SP (Sisters of Providence), one of my favorite people in the world.

At 96, she’s not only still driving, but getting from here to there in a mid-sized SUV, as I learned in a recent conversation. Paraphrasing her comments, she said she’s been looking up at people her whole life — the only way anyone would dream of using the word ‘small’ in connection with the sister is in regard to how vertically challenged she is — and it was great to be looking down on someone, literally, for a change.

You can do that in this Sierra, believe me. You’re riding above pretty much everything on the road that has just four wheels — well above. (To those not well-versed in trucks, just getting in one can be a challenge for many, especially those of Sister Caritas’ height; I managed without a step, but most would need one.) 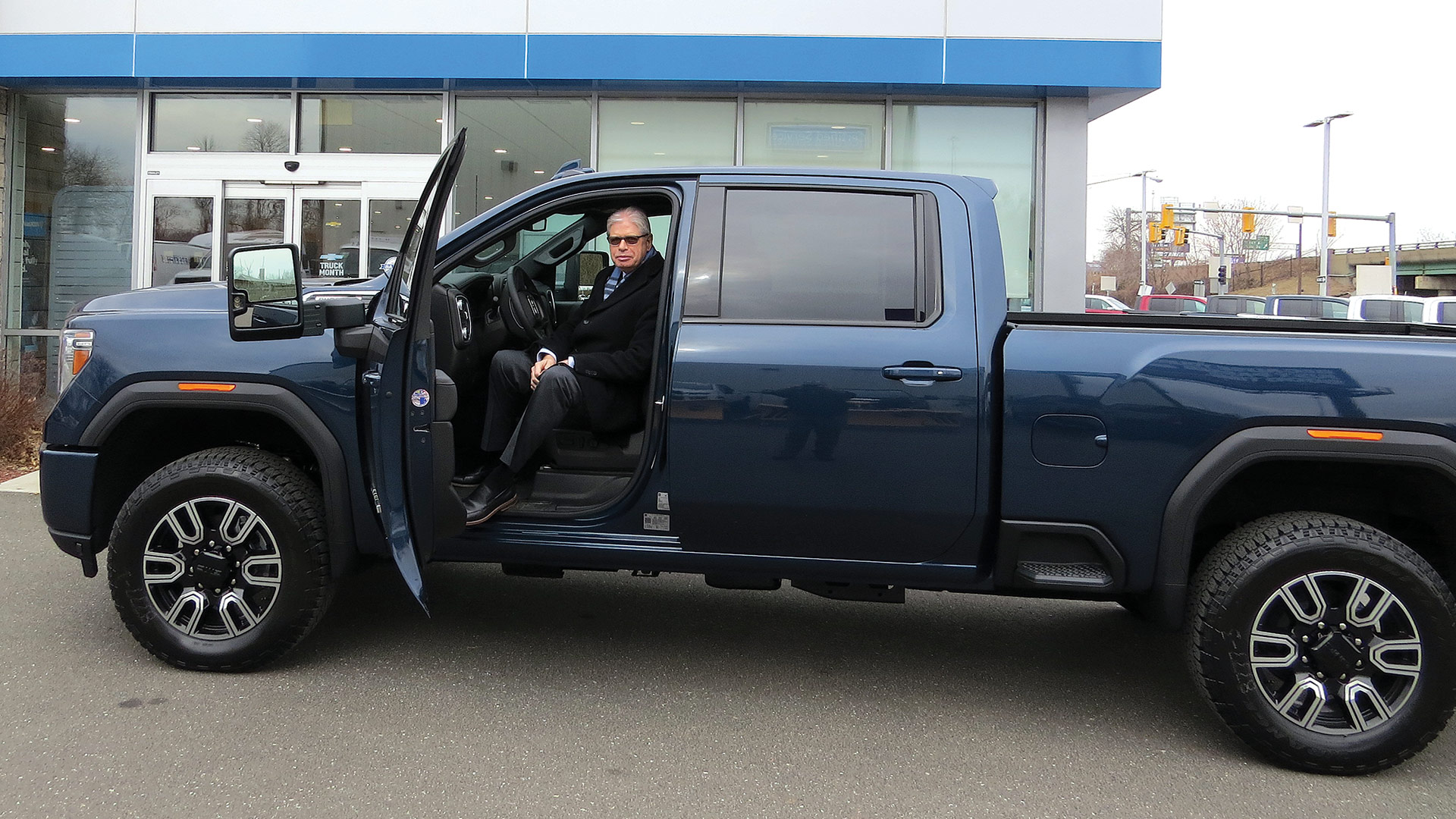 The author rides high for his test drive in the Sierra 2500.

Getting used to the height is just one of the assignments; there’s also the language of trucks, which is somewhat different from that of cars, especially if all you’ve known is cars.

For example, HD doesn’t mean high-definition; it means heavy-duty. And then, there’s phrases like crew cab, as opposed to regular cab or double cab, standard bed vs. long bed, and even Duramax, the engine produced by DMAX, a joint venture between General Motors and Isuzu in Moraine, Ohio.

There are a lot more people who know this language now, said Cummings, adding that many factors contribute to the increasing popularity of pickups in Western Mass. — and across the country, for that matter.

These include improved gas mileage (the 2500 gets 13 mpg, but the smaller 1500, the bread and butter for GMC, does even better), all those luxury-car-like amenities mentioned earlier, and decent lease rates, which are making trucks with higher sticker prices (the 2500 I test-drove listed for $73,250) more affordable.

“We’ve been doing a lot of leasing on these trucks lately,” he explained. “It’s made it more affordable for a lot of people.”

As for the Sierra 2500, this is a full-size, HD pickup, said Cummings, adding that it has undergone a complete a redesign for 2020, with a number of what he called “first-in-the-industry features.”

This list includes that aforementioned Multipro Tailgate, which has six different positions.

“It comes down so it makes a work station for you if you’re on the job site,” he explained, “or if you need a step to get in the bed. It also acts as load support, so if you’re putting a long piece of plywood in there, this will help. It’s a pretty cool innovation, and it’s exclusive to GMC.”

That said, while the 2500 is popular with those who need a ‘work truck,’ it’s also gaining the attention of those who have something large to tow, like a boat or a trailer or a few snowmobiles. Or who have a lot stuff to take to the dump (a large constituency). Or who need a truck for runs to Home Depot (although you can have almost anything delivered these days). Or people who just want to drive a pickup.

And there are lot of reasons why one would, as that trip down and back on Route 57 revealed.

In a commercial for the Chevy Silverado, the Sierra’s close cousin, now making the rounds during sports broadcasts, those doing the test drive are picked up in a helicopter and taken to what looks like a lumber camp, where they then tow several tons of logs up a hill on a dirt road. We were going to do that, but we didn’t have a helicopter, or any logs to tow, or a dirt road with a hill.

So we settled for the South End Bridge and Route 57 instead. The ride was smooth and even — although you are in a pickup, after all, and you do feel those bumps in the road — and there’s certainly plenty of power and acceleration. (I looked down at one point and realized I was doing almost 80, as in miles per hour, not kilometers, and it certainly didn’t feel like it.)

The cabin is huge and well-appointed; again, all the creature comforts are here. If you weren’t three or four feet off the ground and in a cab about four feet wide, you wouldn’t know you were in a truck. Which was the point of this exercise, or one of them.

Mike Dukakis sure looked out of place in that tank — he was the butt of jokes for months, and he’s probably still hearing about it. And maybe I did, too, in the Sierra 2500. But probably not. Times, and pickups, are changing.

Massachusetts isn’t destined to become Texas, Wyoming, or even Arkansas soon when it comes to the number of pickup trucks on the roads, but the numbers are climbing.