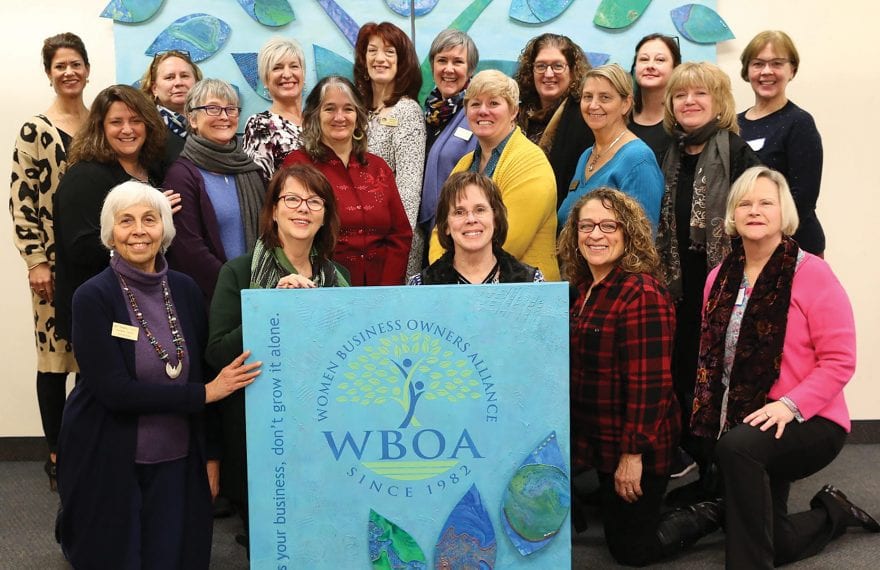 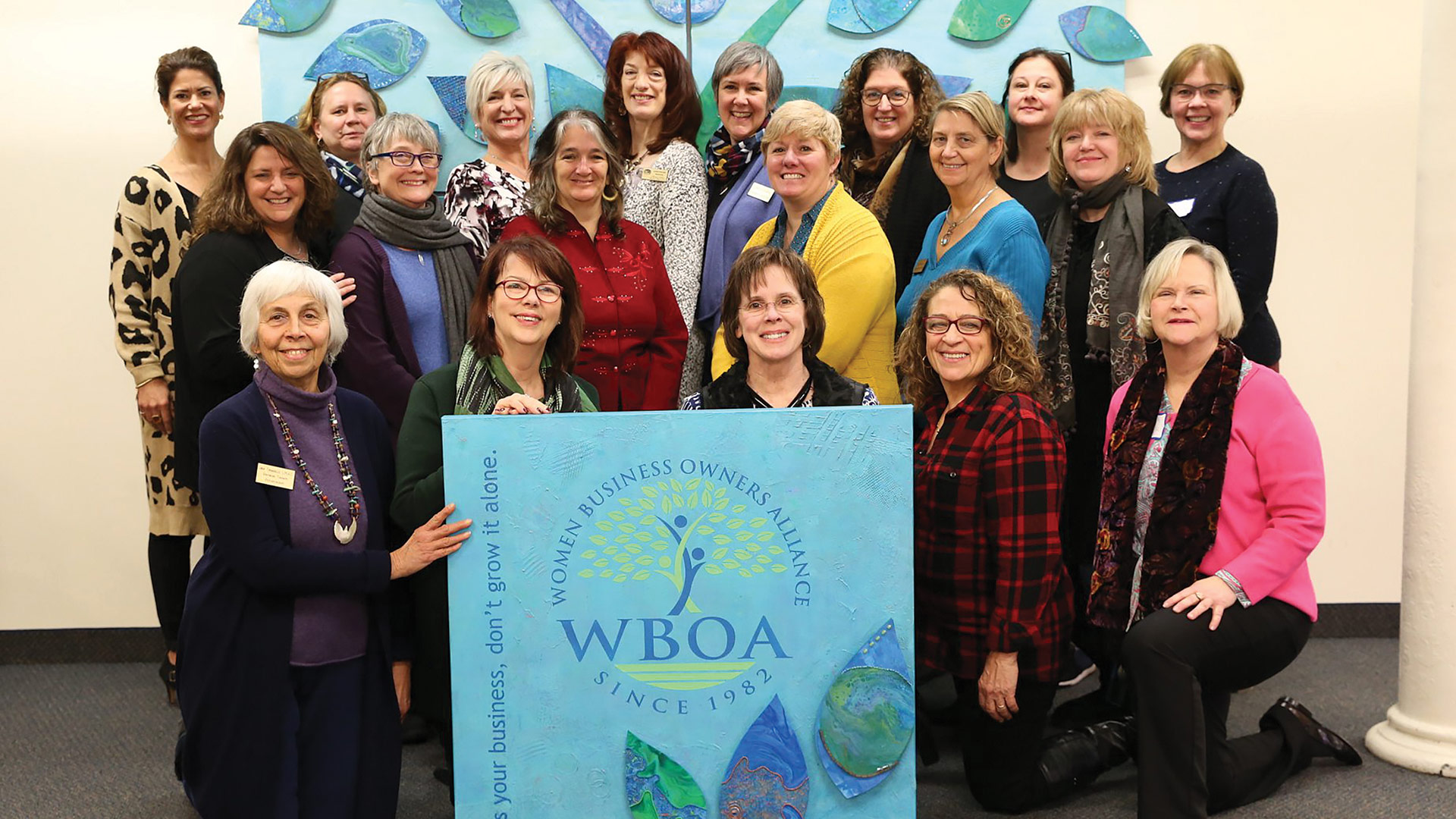 The WBOA team with a mural commissioned from member and artist Mary Kearney.

When the Women Business Owners Alliance launched in 1982, there wasn’t anything quite like it, Anita Eliason said.

“Because there were so few women business owners in the Valley, they felt a need to get together and kind of strengthen their bond and share the experiences they were having that, maybe, were different than the experiences of men in business,” said Eliason, WBOA’s president. “They kind of broke some barriers and did it with a sense of camaraderie with other women business owners.”

These days, business groups, including those focused on women, are much more prevalent, but she thinks the WBOA is still unique — because of its diligent focus on education.

When the alliance became a 501(c)(3) nonprofit recently, “the goal was to establish ourselves as an educational organization,” she said. “Some organizations exist to bring people together to be one another’s customers, like BNI; the whole point of getting together is so I can get to your six degrees, and you can get to my six degrees, and we can all create business.

“We’re really about education and upping skills for people looking to be successful in business, much more than we are about getting business from one another. We’re here to help people be better at business, and we’re mutually learning from one another.”

“That’s not how we operate,” she went on. “We really come together to be enlightened, to be educated, to be inspired so go out and do the business of work. It’s not so much that your sister’s going to be my client, and my mother’s going to be yours. It’s mutually getting together to up our skill level.”

Members of the WBOA say the organization has proven beneficial on many levels, offering inspiration and knowledge from other women’s experiences in a supportive and non-competitive atmosphere. There’s a comfort level many say they haven’t found elsewhere, and it’s helping them gain the confidence and connections to succeed at business and in life.

The organization’s tagline is “going the extra mile for women in business,” reflecting that desire to be more than a networking group or one solely focused on generating new business. In fact, the WBOA tends to avoid the word ‘networking,’ and concentrates instead on making connections and sharing information in a variety of ways.

Eliason, who is also the senior business advisor for the Massachusetts Small Business Development Center’s (MSBDC) Western Regional Office, said not all alliance members are business owners. Some aspire to own a business, while others — such as managers of banks and insurance companies — aren’t technically owners, but are responsible for a company’s day-to-day operations.

“Some people think it’s a social organization, and I think 40 years ago it was something like that. I have the sense that, when they started, they met over dinner in restaurants to start with and then became more formal,” she noted. “Many networking organizations have cropped up in the meantime that are women-focused, and we see ourselves as complementary to those.”

Meaning, the WBOA adds value women professionals may not find elsewhere, and education is at the heart of that value proposition.

For example, the group holds a breakfast meeting every second Thursday at the Scibelli Enterprise Center in Springfield, where the WBOA is based. While the organization has operated remotely since March and the events are virtual for the time being, they have continued without interruption. 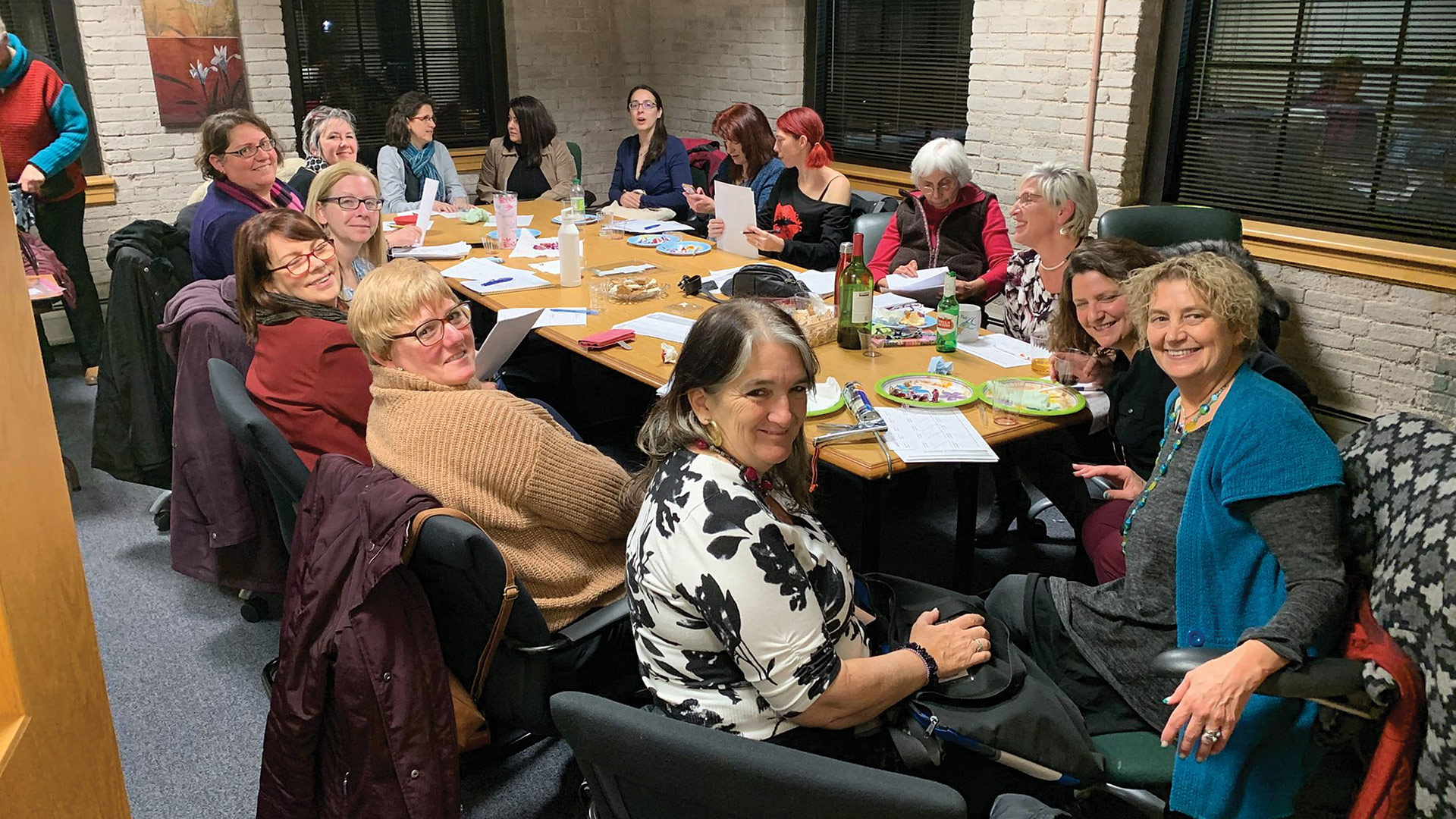 Members of the alliance meet for an evening roundtable discussion during pre-pandemic times; all meetings since the spring have been remote, but none have been canceled.

Last month, the guest speaker was an electrical engineer at Raytheon and a Six Sigma lean-manufacturing black belt, who talked about organization and creating leaner operations. A week later, as is typical following the breakfast events, a longer evening program took a deeper dive into the subject matter, and more specific strategies were introduced.

The WBOA also holds quarterly events like social-media boot camps, which, last spring, featured a general session and 14 breakout sessions. Next month, a virtual financial workshop will present an accountant, an enrolled agent, and a tax preparer, who will speak about tax laws, PPP forgiveness, and a host of other issues. “The goal is to leave with a profit-loss statement and a balance sheet from this year and then set up a blank one for the following year.”

One of the positives of hosting the organization — and, before the pandemic, these events — at the Enterprise Center is that so many resources, from the SBA to SCORE, are also located there, and that aspect has been missed, Eliason said.

“It’s a great hub of activity for women business owners. But when we had to shift online, we never missed a meeting. We continued to meet without exception, which we’re kind of proud of,” she said, noting that even more programming was added, such as ‘happy hour’ events that are more motivational in nature than the breakfast discussions, with topics ranging from personal wellness to navigating remote work. “It’s really relevant stuff.”

It also requires resources to make it all happen, which is why the WBOA seeks sponsorships from organizations to underwrite its work. “We’re nonprofit, but there are expenses,” Eliason said, noting that fundraising has been more difficult in a year when businesses of all kinds are struggling.

Collaborators include the MSBDC, SCORE, Valley Community Development, the Franklin County CDC, the Center for Women and Enterprise, and Common Capital. The WBOA also created the first TedX event in Easthampton and established the WINGS mentor program at STCC.

“We see ourselves as a place to learn about all the other resources that are available and always come back for additional education. That’s why we’re strategically placed at the Scibelli Enterprise Center,” she said. “We’re really about education and upping skills for people looking to be successful in business, much more than we are about getting business from one another. We’re here to help people be better at business, and we’re mutually learning from one another.”

It’s been called a sisterhood in the past, and Eliason appreciates that.

“I think of it almost like a sorority — we’re going through similar experiences, we have similar challenges, and for every challenge we face, there’s someone who was at that level with their business years ago, and someone who hasn’t gotten there yet.”

Elaborating, she noted that BOA members feel comfortable calling on professionals who have been through what they’re experiencing. “It’s an evolving group of people at different stages of business ownership, so there are people you can call on, really, for anything.”

Right now, the group boasts about 45 members, though it has topped 100 in the past, and Eliason expects the number to rise to about 70 next year, once the pandemic slows. That number, she said, would be a sweet spot, generating a rich pool of experience and connections, but not such a high number that events become unwieldy.

As for those events, she said platforms like Zoom will continue to have a place at the WBOA even after members return to meeting in person, because the virtual events have cast a wider geographic net, and those technologies also allow the organization to archive webinars where important information gets shared.

In each meeting and newsletter, members also learn about available loan and grant opportunities to help them grapple with a pandemic that has hit small businesses hard, and forced many to close altogether. Other members are trying to keep their businesses afloat while working at home and balancing their careers with what their kids need in terms of remote learning.

“They’re doubling as a teacher for their kids,” Eliason said. “That’s not just a woman’s challenge, but for many of them, it’s been tough trying to juggle those two roles. It’s a lot to navigate.”

Even without the adjustments wrought by COVID-19, there’s always more to learn about how to build and grow a business, and to that end, WBOA leadership will continue to identify categories of information that would be most useful to its members.

“We’re looking for even more diversity of speakers in terms of the industries they come from,” she said. “It’s about linking what’s deliverable to really out-of-the-box thinking.”

“Just come,” she said when asked what she’d say to women wondering whether the alliance is for them. “Attending a meeting is significant. It’s a really safe place to learn information. A lot of people say, ‘I didn’t need what the main speaker had to say, but one of the other people who spoke for five or six minutes, she made it worth coming.’

And the learning — and, hopefully, growing — continues.