Collins-Crochiere Construction Builds on a Record of Consistency 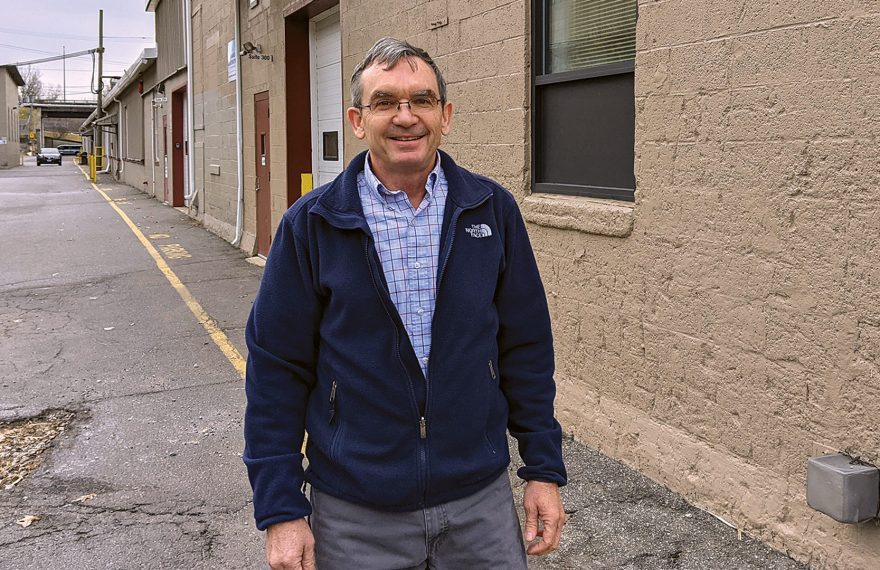 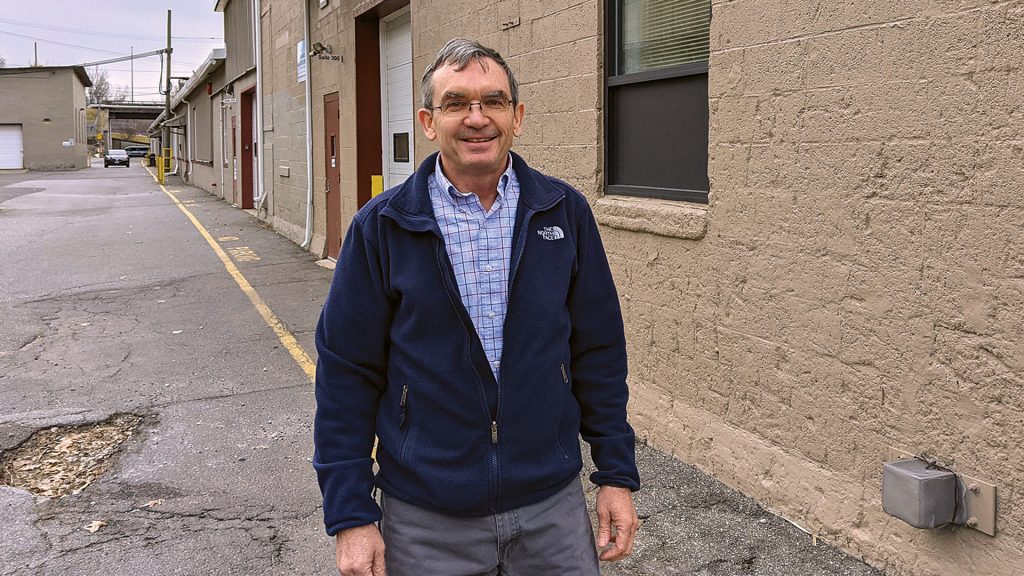 Thomas Crochiere at the Chicopee property he purchased, renovated, and tenanted up almost two decades ago.

Thomas Crochiere had a modest vision for his construction company a quarter-century ago — and, as it turned out, a successful one.

“Having worked for a company with up to 100 employees in the past, I knew I didn’t want to have a large company,” he told BusinessWest. “I was happy with a small company where I could know my employees very well and work with them and manage one or two projects at a time. I didn’t want to have a large plate of projects. So we’ve just continued in that direction for 26 years.”

Crochiere entered the construction world out of college and, as he said, worked for a large company that performed a lot of state and municipal work.

“I was working as a project manager for that company for about 10 years. But I got a little itchy; I wanted to become an owner. So my wife and I started this business back in 1995, and since I’d been doing mostly municipal and state work, and had pretty decent familiarity with that process, we stayed with commercial construction as our primary focus, and we have just picked away at jobs over the years.”

Tom Crochiere and Ann Collins-Crochiere launched Collins-Crochiere Construction Services Inc. in Palmer and rented shop space in Ludlow for a few years. Then, 18 years ago, they came across an eight-acre parcel on McKinstry Avenue in Chicopee, on which sat a large, long building in need of rehabilitation. They saw potential, not only as the company’s headquarters, but as a rental property for service businesses, under the name of Main Street Property Management.

“I was happy with a small company where I could know my employees very well and work with them and manage one or two projects at a time.”

“When we bought this, it was bankrupt, abandoned, contaminated, and pretty much in nasty shape,” he said of the property, which used to be the home of Jahn Foundry in Chicopee, the sister foundry to the Springfield site that suffered a fateful explosion in 1999. “When we bought this, we cleaned it environmentally and then started building it out for modern business space. It’s been hunky dory. But early on, it was a little sketchy.”

It has also helped him keep his employees busy during slow weeks. “We can always find something to improve here, whether it’s painting a hallway or doing some other repair that makes life better for the tenants. That’s been our filler.”

But the day-to-day business has been consistent over the past 26 years. “We have some busy years, some not-so-busy years, and our staffing ranges from around five to 10 employees. The high point was 10, but that was short-lived. It wasn’t as productive or effective as having four, five, or six.

“So we’ve stayed with that, and all of our work generally has been word of mouth,” Crochiere continued. “We don’t do a whole lot of marketing, and work just seems to come to the surface. When we’re finishing a job, someone else calls and has bought a building or is looking at a building or is planning a major renovation. That’s how work seems to fill our schedules. That’s how we got to this point. It’s worked out reasonably well.”

Work to Be Done

Crochiere noted several jobs from recent years to give an idea of the company’s work, including a renovation and addition to Ralph’s Blacksmith Shop in Northampton, similar work on a building purchased by Fire Detection Systems in Chicopee, and a renovation and upgrades to an older building purchased by Fire Service Group in Palmer. At Multicultural Community Services in Springfield, Collins-Crochiere tackled an office renovation two years ago and is currently working on a group home for the organization.

“A typical job is, somebody buys a building or is about to purchase a building, and they think they got a great deal on it, and then they invite me to do a walk-through, and I start to think about building codes, ADA codes, energy codes, and I inform my potential client that their budget is about a third of what it should be because the building codes require a certain amount of updating,” he explained.

“In a perfect world, property owners would have a contractor or architect or engineer walk through their building every five years just to give them insight into how far behind the 8-ball they are.”

“They look at me initially with ‘this isn’t part of my financial plan this year,’” he went on. “But we work through it. I work with local architects and engineers to do a full code review and come up with design requirements and upgrade requirements, and then we typically work with the owner to put together a team of subcontractors and suppliers to complete the project.”

Over the years, plenty of business has been of the repeat variety, he noted — maybe a former customer is growing and is buying a second or third building, or a first renovation was good for 10 years, and now they call looking for more upgrades or a new addition.

“That’s been nice. And our relationships in Western Mass. have been helpful. We often find that a new customer will call and say he’s spoken to two close friends, looking for a contractor, and our name comes up in both conversations. So he says, ‘I guess you’re someone I should talk to.’ That has led to a few jobs over the years.” 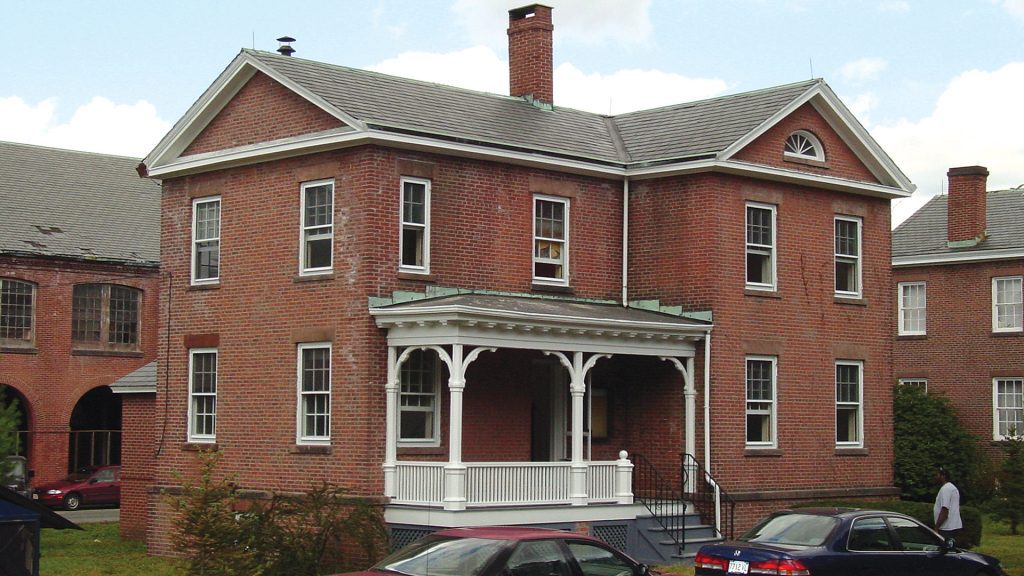 One of the company’s recent projects involved repairs to this building at Springfield Technical Community College.

Consistency has been king when it comes to the company’s core of subcontractors and suppliers as well, many of which have been the same for decades.

“It’s been an asset for our business to be able to rely on our relationships with these local subcontractors who bring extra expertise in each of the trades, whether it’s electrical, mechanical, or plumbing. That means fewer surprises. That’s one factor that’s helped us with our consistent delivery of jobs.”

Even at the Chicopee property, the company has done plenty of tenant buildouts and renovations over the years. Crochiere knows properties everywhere are crying out for upgrades, but business owners often don’t realize it.

“In a perfect world, property owners would have a contractor or architect or engineer walk through their building every five years just to give them insight into how far behind the 8-ball they are, because codes change, technology changes, things wear out,” he explained. “And yet, when someone goes to sell their building or someone buys a building or someone plans an upgrade, the owner is frequently shocked at how much they have to do and how expensive a project might be — they only wanted to do a conference room and a bathroom, and it turns out to be a whole lot more.

“After so many years in the business, we’ve come to expect it, but unlike getting your car inspected each year, no one inspects their own building each year. And it would be helpful, I think, for owners to do that,” he went on. “Even with efficiencies, there are some products out there that have a short payback time, but they’re never considered until someone considers a major renovation or is purchasing a building.”

While, as Crochiere noted earlier, some years have been stronger than others, no one was prepared for the chaos of the early days of COVID-19, and its lingering economic effects.

“When COVID hit, we were here for probably four months during that initial shutdown period, where we have some essential businesses that manufacture products here, so it was nice to be able to do some things to support them and keep our employees busy,” he said.

That was especially fortuitous because the firm had an office renovation in the planning stages, and the client — another essential service — called and decided they didn’t want anyone working in the building for a few months.

While work eventually restarted for contractors during the pandemic, this past year has seen a global supply-chain crunch impact firms of all sizes, and that remains a serious concern (see story on page 15).

“It’s hour to hour — it’s no longer planning for the week, it’s ‘what happened last night? What product isn’t going to get to the job this week that was supposed to be delivered, and it’s now six weeks out?’ It throws a wrench into everything,” Crochiere said.

“But it’s a nationwide issue, and everyone’s aware of it, so customers have been understanding when I send them an e-mail indicating we’ve had a wrinkle in this week’s plan or this month’s plan,” he went on. “Fortunately, our subcontractors are looking forward and trying to purchase long-lead items as early as possible to try to avoid significant effects on jobs. It’s a weekly — no, it’s a daily inconvenience, but everyone is trying to work through it.”

Like other contractors BusinessWest spoke with for this issue, Crochiere said demand for work is plentiful, and once the global issues clear, the future seems bright.

“I think people will continue to want to improve their buildings and make capital improvements to facilitate the changing business environment. Manufacturing has changed a bit over the last two years, and certainly office usage has changed the way we use our spaces. So I expect there will be continued work in the pipeline as a result of people adjusting their business needs.”

The other hindrance to taking on that work is, of course, persistent workforce shortages in construction — an issue that long predates COVID.

Crochiere is a believer in construction as a career, though, and would like to see more young people catch the same vision.

“Very few young people are showing interest in the physical labor, but one has to be not just physically capable, but smart — technology is changing in every trade, every business, so it’s a great opportunity for young people who are motivated and want to work, with their hands and with their brain. There’s a lot to learn, but the opportunities are limitless. The lifestyle is good, the income level is good, they’re physically active during the day … it could be a good thing.”

It certainly has been at Collins-Crochiere Construction Services, for 26 years and counting.