He’s Always Made a Difference, but Not a Very Big Splash 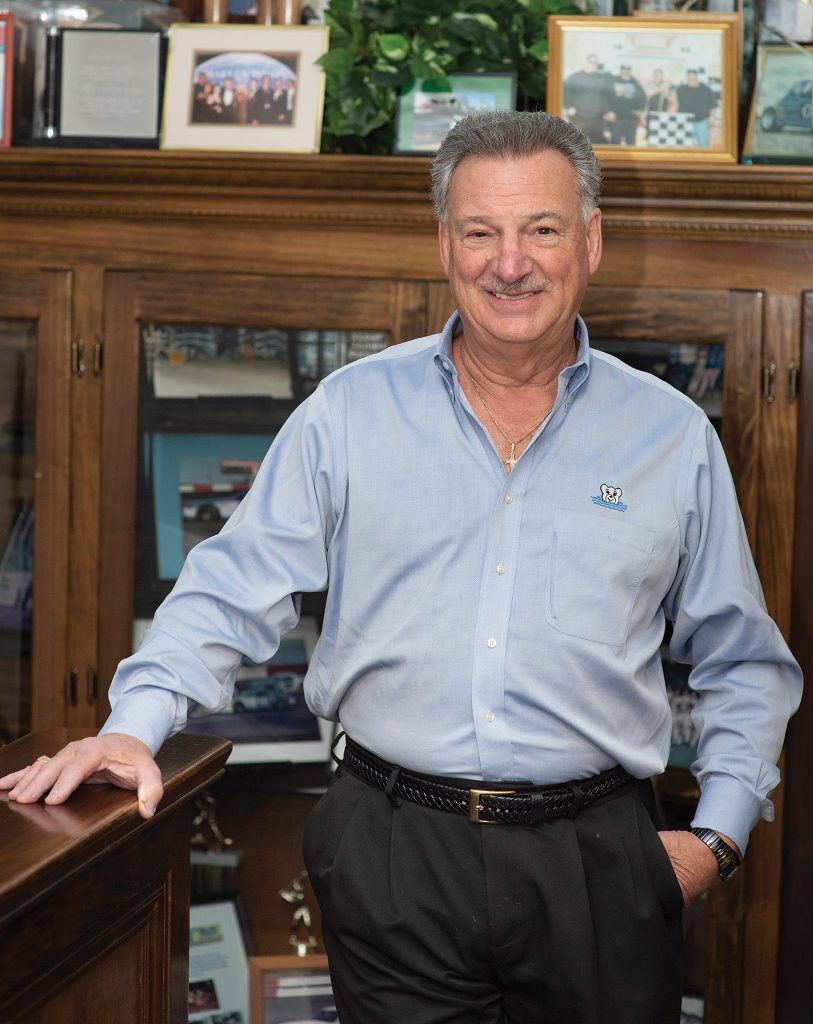 He says he’s always been inspired the movie’s message about how one person’s life can impact so many others — and he sees a little (or maybe more than a little) of himself in the film’s main character, George Bailey. Indeed, their lives took some similar paths, as we’ll see.

Like Bailey, Hebert — the founder and president of Teddy Bear Pools — has spent his life serving his community and being a Difference Maker for thousands of his neighbors.

Hebert’s office is located above the Teddy Bear Pools and Spas store in Chicopee. Recognition plaques, thank-you notes, and photos cover nearly every inch of every wall in the area leading to his office, where those walls are covered, too.

It’s not unusual for community leaders to devote all or most of their philanthropic efforts to one specific cause or organization. Hebert does not have one favorite, saying “I love all the causes we’ve supported.” Indeed, the walls are lined with dozens of plaques recognizing years of support for the Children’s Miracle Network, the Jimmy Fund, the Make-A-Wish Foundation, and several animal-welfare groups.

“As human beings, I feel we have a responsibility and an obligation to take care of our furry friends,” Hebert said, noting that his efforts on behalf of animals have included support of and involvement with agencies ranging from the MSPCA to the Thomas J. O’Connor Animal Control and Adoption Center to the Zoo in Forest Park, which he serves as a board member, an invitation he accepted as a tribute to his mother.

“My mom grew up in the Great Depression, and to earn money for the family, she would babysit neighborhood kids and bring them to Forest Park,” he recalled. “When I was young, she brought me to the zoo, so I have those special memories as well.”

Hebert’s position on the Forest Park Zoo board goes well beyond sitting around a conference table. On the day he spoke with BusinessWest, the zoo had enlisted his help to repair the metal bucket on its Bobcat tractor. Just before this interview commenced, Hebert was making calls to enlist Tom O’Sullivan, a welder friend, to take on the job. When the repair to the bucket was successful, Hebert contacted Bernie Croteau, another friend, and arranged to put four new tires on the tractor.

“I’m blessed to be part of a circle of friends who are good people and whom I respect,” Hebert said. “It’s not about me; they simply helped solve a problem for the zoo. It’s all about helping people.”

For all the high-profile and public contributions that Hebert makes in the community, there are just as many that are, like that fixing of the tractor at the zoo, efforts that are out of the spotlight but critically important to those involved.

“I always share with the audience that I used to stutter and that I still battle insecurity and low self-esteem. All of a sudden, people connect with you because many of them are facing similar struggles.”

When Hebert takes part in community activities, he is often accompanied by his wife, Barbara, who also does a great deal of work in the community. For many years, the couple volunteered to deliver Thanksgiving meals at a senior center in West Springfield.

Rather than just dropping off the food and moving on to the next apartment, the Heberts would introduce themselves, start up a conversation, and spend time with each resident. That extra attention became something the residents looked forward to every year, and they would remark on how the couple made Thanksgiving special for them. Hebert said he and Barbara enjoyed the visits as much as, if not more than, the seniors. 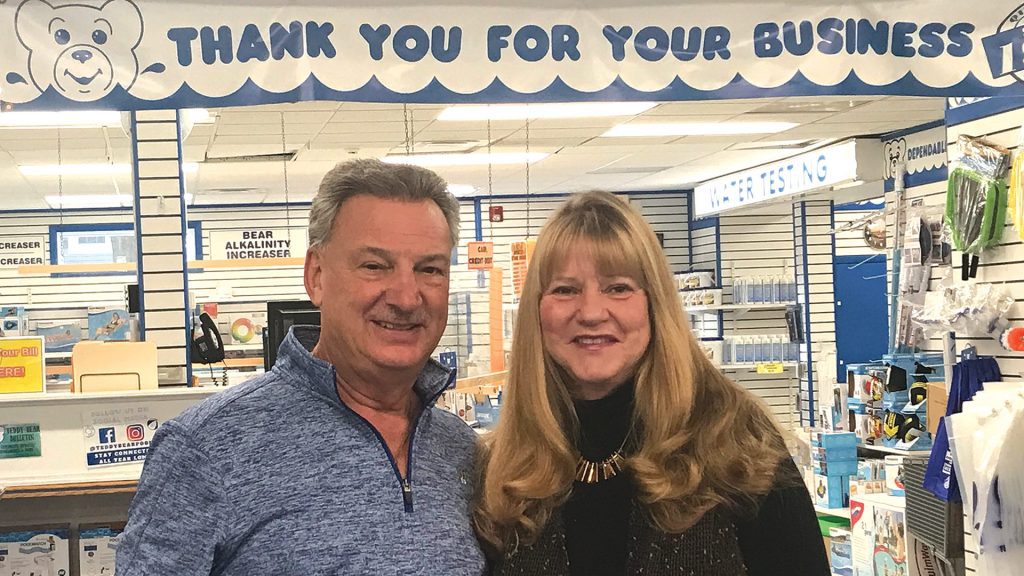 “What does it cost to give your time?” he asked, adding that he’s spent a lifetime finding ways to give back that go above and beyond writing checks — although he’s done a lot of that, too.

For all these efforts, and for the way he has inspired others to follow his lead, Hebert has certainly earned his place in BusinessWest’s Difference Makers class of 2022.

While many residents know that Hebert started Teddy Bear Pools from his parents’ carport and built it into a hugely successful business, fewer know the insecure kid with the stutter.

Hebert described himself as someone with low self-esteem who felt good only when he was working.

“Whether it was mowing lawns, washing cars, or doing my paper route, having a job made me feel better about myself,” he said. “I liked the feeling, so I kept trying hard to challenge myself. I still do that to this day.”

Hebert’s “first real job” came at age 14 as a busboy at the Hu Ke Lau restaurant after he told the owners he was 16. “They didn’t question my age because my friend worked there.”

In his early 20s, Hebert signed up for karate lessons, which provided another big boost to his self-esteem and self-confidence. All these experiences contributed to gradually overcoming his stutter.

A lifelong car aficionado, Hebert joined a local Corvette club and found himself voted in as the youngest president of the group. One time, at a gathering of Corvette clubs in Vermont, he found his voice.

Clubs from around the Northeast had come to Thunder Mountain racetrack for the event. When announcements were taking place, Hebert wasn’t pleased with the way they were handled and decided that, since he was a good ad-libber, he would take on the emcee role.

“Sure, we’ve had our challenges, but it’s like being in a boxing ring. You take your punches, you get knocked down, and then you get back up.”

“I felt comfortable because these were all racing people just like me,” he recalled. “When I finished, it suddenly hit me — ‘oh my God, I was speaking in front of all these people.’”

Now a confident speaker in demand at settings ranging from swimming-pool industry conferences to local schools, Hebert said his goal in speaking is not to motivate, necessarily, but to inspire others to succeed in their lives.

“I always share with the audience that I used to stutter and that I still battle insecurity and low self-esteem,” he told BusinessWest. “All of a sudden, people connect with you because many of them are facing similar struggles.”

During his college years, Hebert spent his summers as a subcontractor working day and night on installing swimming pools — he literally worked at night with spotlights to finish some installations. It’s hard to believe now, but Hebert’s career in swimming pools almost didn’t happen.

After attending Holyoke Community College (where he is currently a trustee), then Springfield Technical Community College, Hebert completed his degree at Worcester State College, and then committed himself (sort of) to continuing a family legacy; 11 generations of Heberts, before his father, were doctors.

Ted had studied pre-med and had above-average scores on his medical boards. He applied to 15 medical schools and received 14 rejections. The University of Southern California extended an invitation only after another candidate dropped out. But Hebert had conflicted emotions about leaving for Los Angeles.

“I had started a little business, I had a girlfriend, and I had planned to travel the country,” he said. The decision became clearer one day, while working at a friend’s house, when he received a call that his mother had been taken to the hospital with an aneurysm.

“I never left, and I have no regrets,” he said.

Like George Bailey, Hebert put off his dreams of traveling to take care of family matters. As his business outgrew the carport, Hebert rented space in a former car wash on Memorial Avenue in Chicopee. When the owner was foreclosed upon, Hebert then bought a vacant building on East Street that once housed a Studebaker dealership back in the 1940s. Today, customers from all over Western Mass., as well as parts of Connecticut and Vermont, know the East Street location as Teddy Bear Pools and Spas.

Since the pandemic hit, homeowners have invested much more in their backyards, which often means adding a swimming pool or hot tub. Business at Teddy Bear has skyrocketed with Hebert’s main challenges, which involve a lack of products due to supply issues and finding installers for all the orders when they arrive.

Though his business is booming, Hebert is quick to empathize with the many businesses that have struggled to survive in the COVID era. “We’ve been blessed to be buried with business,” he said.

It’s easy to look at Hebert’s success today without appreciating the many challenges he faced along the way. Most notably, back in the 1980s, several employees embezzled more than $1 million dollars from the business in two separate incidents. Experiences like this can leave a person cold and cynical, but not Hebert.

“Sure, we’ve had our challenges, but it’s like being in a boxing ring. You take your punches, you get knocked down, and then you get back up.”

For Hebert, it all starts with a belief that, if you have faith, then you can find hope. “I don’t necessarily mean religious faith, but a belief that there is something bigger than us.”

He called being chosen as a Difference Maker one of the more important honors he has received.

“In some ways, Difference Makers brings together all the community efforts Barbara and I have been involved in,” he said. “As much as we appreciate it, we don’t do this for recognition, but because we feel it’s our responsibility as people in our community.”

Among the inspirational sayings posted in Hebert’s office is one that reads: “Nobody can go back and start a new beginning, but anyone can start today and make a new ending.”

From the busboy who battled his stutter to the successful businessperson and community leader, Ted Hebert exemplifies the ability to make a new ending and reflects the spirit of a Difference Maker.

“I know it’s a cliché,” he said, “but I believe, as long as you are a good person and treat others like you want to be treated, how can you go wrong?”

Yes, he does sound a whole lot like George Bailey. And he has had a wonderful life.