Hooplandia Organizers Set a Date for 2023 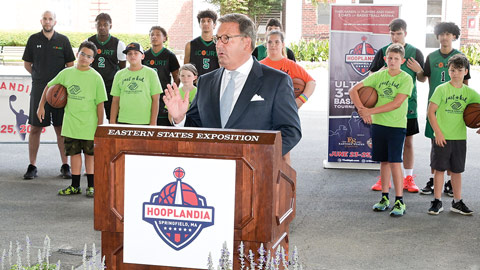 Gene Cassidy, president and CEO of the Big E, announces plans for Hooplandia at a press conference staged last month.

Mark Rivers acknowledged that a lot of things have changed since he and officials at the Big E and the Naismith Memorial Basketball of Fame first announced that the region would host a giant three-on-three basketball tournament to be called Hooplandia.

Indeed, that announcement came late in 2019, just a few months before the arrival of COVID-19, which would eventually cancel large-scale events of all kinds and put plans for Hooplandia on ice — for 2020, 2021, and then 2022.

But what hasn’t changed, said Rivers, a marketing and programming consultant to the Eastern States Exposition who has also worked with the Hall of Fame on tournaments, is that what he calls the ‘fundamentals’ are still in place.

“Fundamentally, and probably most importantly, the idea going in, even in 2019, was to create an event that would be around for 40 years or more, just like in Spokane. So if you’re looking at creating an event that’s a 40-year event, it doesn’t get stale after a few years — it’s still a grand idea and still a great proposition for the region.”

“Three-on-three basketball is still very, very popular, and Springfield is the birthplace of basketball,” he told BusinessWest, as he explained, succinctly and effectively, why those who conceived Hooplandia are still bullish on this concept and are proceeding with a tournament set for late June 2023.

If anything, conditions are even better, he said, noting that three-on-three basketball has only become more popular as a sport — and a competition (more on that later).

John Doleva, president and CEO of the Hall of Fame, agreed, noting that, while it might have been easy to walk away from the event given all the challenges and uncertainty moving forward, the vast potential of the concept led them to stay the course. 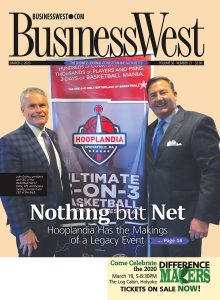 The cover of the March 2, 2020 edition of BusinessWest announced Hooplandia. That was just a few weeks before the pandemic shut down the state and put Hooplandia on ice for what will be three years.

“Everyone stayed with it, and that’s very encouraging,” he said. “To have all those entities — the Big E, the city of West Springfield, Mark Rivers — step up and be as committed, if not more, after a couple of years is a very positive thing.

“Everything is lined up for a great event,” he went on. “It just took a little longer to get there.”

In fact, it will be roughly four years from the date it was first conceptualized until the whistle that starts the first game on June 23, 2023. But everyone involved is sure it will be worth the wait.

Turning back the clock, Rivers said planning for Hooplandia began in early 2019. Inspired by a huge tournament in Spokane, Wash. called Hooptown USA that brings tens of thousands of people to that city every June, Rivers conceived of a concept that would unite the Big E and the Hall of Fame in an endeavor that would capitalize on the soaring popularity of three-on-three basketball and bring the game to the area where the sport was invented.

The March 2, 2020 issue of BusinessWest featured Doleva and Eugene Cassidy, president and CEO of the Big E, standing on either side of a poster promoting Hooplandia. The headline read: “Nothing but Net: Hooplandia Has the Makings of a Legacy Event.”

Just a few weeks later, the state was in lockdown. A few months later, it was clear to everyone that there would be no Hooplandia in 2020. And as the pandemic persisted and subsequent surges continued to hit the nation and the region, the tournament was scrapped for 2021 as well.

And while the situation improved somewhat that year — enough for the Big E to make a much-anticipated comeback after being idled for 2020 — there were too many uncertainties and not enough time to put a tournament in place for 2022, Rivers said. 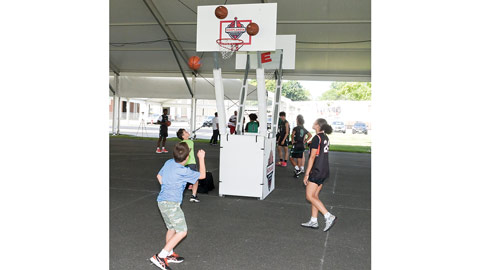 Young players get a taste for 3-on-3 basketball at the press conference announcing the Hooplandia event set for June, 2023.

“We thought we could do it in 2021, but there was still a lot of overhang related to crowd gathering and big events,” he said. “And with Hooplandia, you need almost a year’s run-up, because you open up registration six months prior and mobilize your whole organization, and we couldn’t predict what June 2021 was going to look like. Then, we get into 2021, and we just didn’t have enough time to get it organized for ’22; and once you commit, you commit, and we were fearful about putting a lot of time and resources into this and having to pull the plug again.”

But through all of that, no one involved in Hooplandia had any thoughts of giving up on this concept.

That’s because of those fundamentals, he went on, adding that what was true in those early days of 2020 remains true today — Hooplandia does have the makings of a legacy event.

“Fundamentally, and probably most importantly, the idea going in, even in 2019, was to create an event that would be around for 40 years or more, just like in Spokane,” Rivers explained. “So if you’re looking at creating an event that’s a 40-year event, it doesn’t get stale after a few years — it’s still a grand idea and still a great proposition for the region. It’s not like three-on-three basketball went away or Springfield is no longer the birthplace of the game. Those things didn’t change.”

Essentially, organizers are picking up where they left off, said Cassidy, with expectations that the 2023 event will draw 1,000 or more teams (4,000 players) across a number of categories — from youths to veterans; from those in wheelchairs to what would be considered professionals in this sport — and that it will grow over time to draw several thousand teams and someday rival Spokane’s event in terms of size and prestige.

“Spokane is the benchmark because that is an economic driver — it’s an annual event that brings tens of millions of dollars to the local economy. To bring in 1,500 teams and grow that every year to 10,000, that’s a big initiative, but it’s not an unrealistic goal.”

The original plan was to mobilize the grounds of the Eastern States, play a handful of games at the Hall of Fame, have both organizations work together on marketing and promoting the event, and conduct some outreach to basketball organizations and teams throughout the Northeast, Rivers said. And, by and large, that is still the plan.

If anything, he went on, three-on-three basketball is probably even more popular than it was when Hooplandia was first conceived.

“It’s now an Olympic sport, it’s now an international sport with national teams representing their countries in international play, and there’s more and more tournaments around the country that are focusing on this caliber of basketball,” he explained. “So it’s become a little more common, and I think we have a great opportunity to be a leader in that segment.”

Elaborating, he said local organizers have Spokane as a target, with a goal of seeing Hooplandia approach and even exceed that scale when it comes to everything from the number of participating teams to the impact on the local economy.

“Spokane is the benchmark because that is an economic driver — it’s an annual event that brings tens of millions of dollars to the local economy,” Doleva told BusinessWest. “To bring in 1,500 teams and grow that every year to 10,000, that’s a big initiative, but it’s not an unrealistic goal.”

Hooplandia will actually be staged the same weekend as the festival in Spokane, but organizers don’t see it as competition for that event.

“We’re 3,000 miles away,” Doleva said. “We see this an opportunity for people from the Midwest east to come to Springfield and play in a tournament where they might not have gone all the way to the West Coast — and you have the allure of the Hall of Fame.”

As Cassidy told BusinessWest and all those assembled at a recent press conference to announce the new date for the tournament, “it’s game on for 2023!”