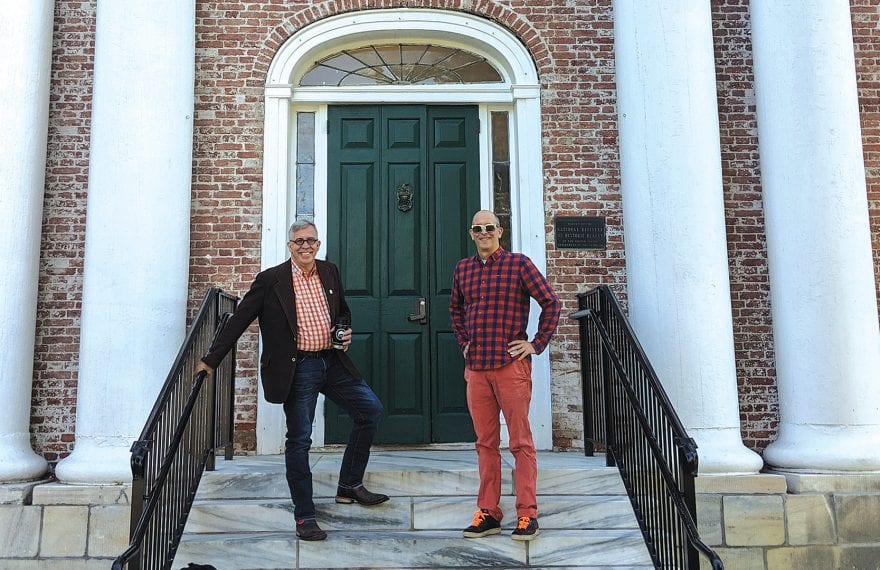 A Novel Approach to Co-working 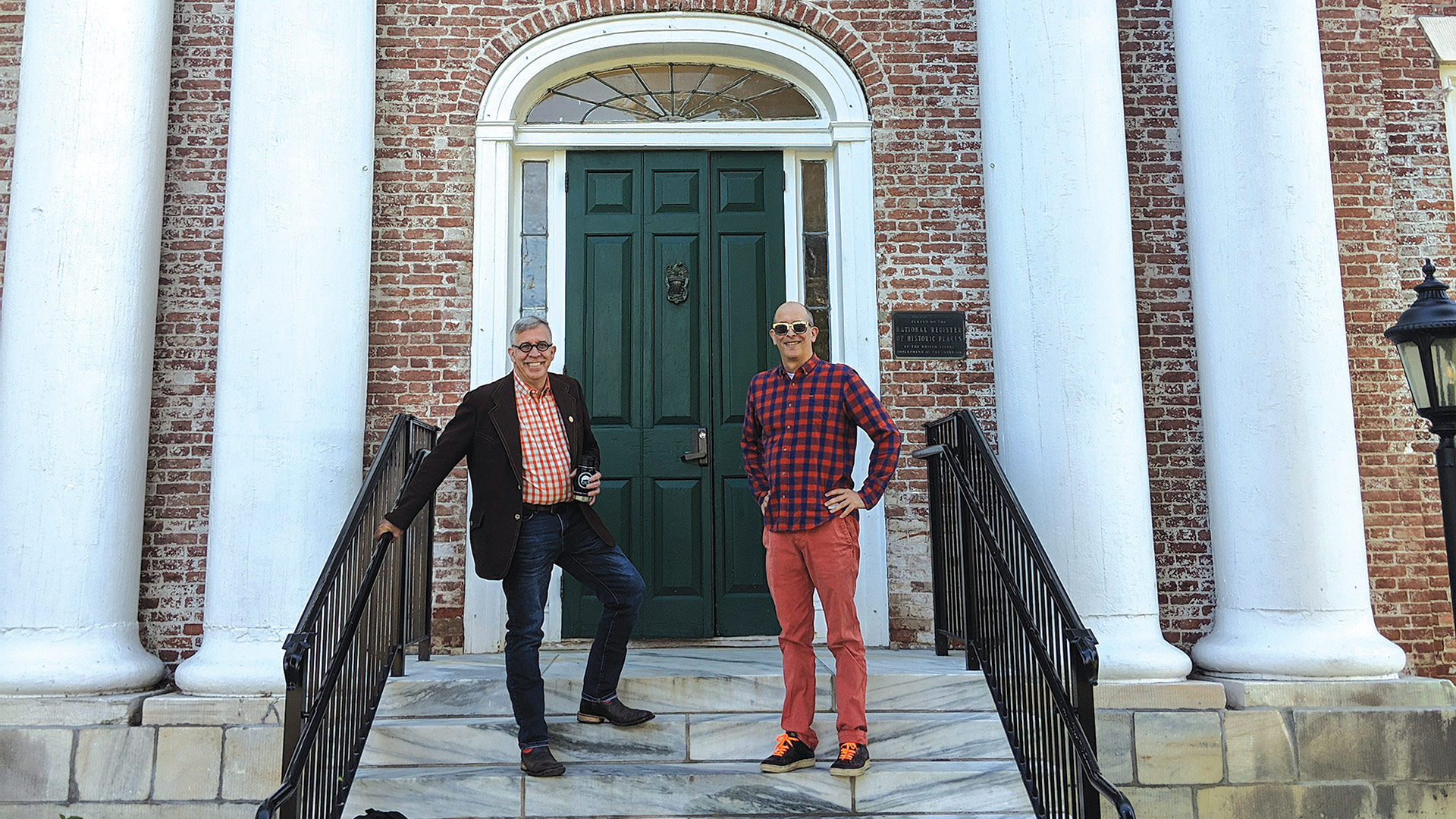 Greg Peverill-Conti, left, and Adam Zand stand on the steps of the Lenox Library

In many respects, public libraries were the original co-working spaces, and they’ve always been a good place to get some work done. To bring attention to these sometimes hidden, unappreciated resources and actually rank the state’s 450 or so public libraries, two business partners have embarked on a unique endeavor they call the Library Land Project.

Greg Peverill-Conti says a few of the locals have called it “a library for bears — right in the forest.”

He was referring to the tiny — as in tiny — municipal library in the Berkshire County community of Mount Washington in the southwest corner of the Commonwealth.

“It’s located within a town hall built in the 1780s or 1770s; it’s maybe 25 feet by 18 feet — it’s just a big empty hall with a little office built out in the corner and three or four bookshelves,” said Peverill-Conti. “There’s no librarian there, so when you take a book out there, you have to take the slip out of the book, write your name and the date, and when you bring the book back, you put in a pile.” 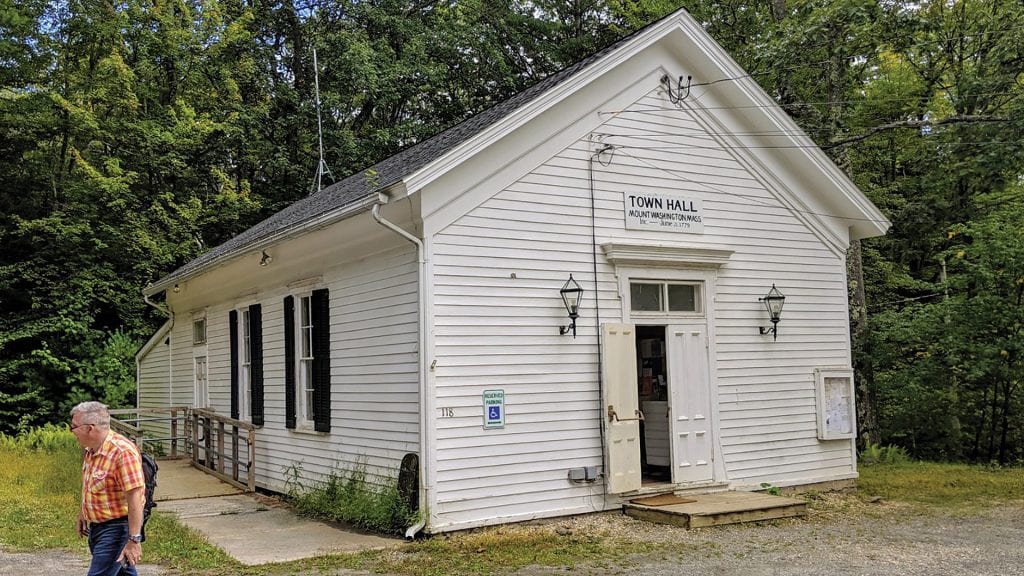 The library in tiny Mount Washington, located in Town Hall.

Still, there are tables and benches at which people can work, and municipal wi-fi with which to stay connected. And so, this facility in Mount Washington is becoming another intriguing chapter — yes, that’s an industry term — in an ongoing story (there’s another one) called the Library Land Project.

Peverill-Conti and Adam Zand, co-owners of a PR agency called SharpOrange, are criss-crossing the state in an effort to visit, catalog, and rank each library they visit as a co-working space. It’s an endeavor that started, well, because they like working in libraries — as opposed to an office, home, Starbucks, WeWork, or other monthly-fee shared spaces — and they firmly believe that others should be working in them as well.

“Libraries will say that they’re the original co-working spaces, and they are,” said Peverill-Conti, adding that they are accessible, public, generally quiet, almost always equipped with wi-fi, and will loan visitors everything from books to telescopes to carpet cleaners, as the two have learned in their travels. And they provide all this free of charge.

“Libraries have always been a place where people can go and do work,” he noted. “And the best thing about libraries is that very town in Massachusetts has at least one. Commercial co-working spaces can be few and far between, especially when you get into more rural areas.”

Zand told BusinessWest there are somewhere between 450 and 480 public libraries in Massachusetts (the number varies, because some don’t count branches and community libraries toward the total), and he and Peverill-Conti are determined to visit every one of them and rate them on a host of criteria, from parking to noise to restrooms. A of their journey, their rankings, stories about their visits, and more can be found by visiting librarylandproject.com.

They’re about halfway to that goal, and recently began to add libraries in the 413 to the list of those visited.

Indeed, during a three-day blitz through Berkshire County, they visited more than 20 libraries, including the one in Mount Washington, and are in the process of adding them to the map and a grid of ranked libraries.

A look at that map reveals that most of the facilities in Hamden, Hampshire, and Franklin counties have yet to be visited, and the partners plan to add them to the list in the coming months. 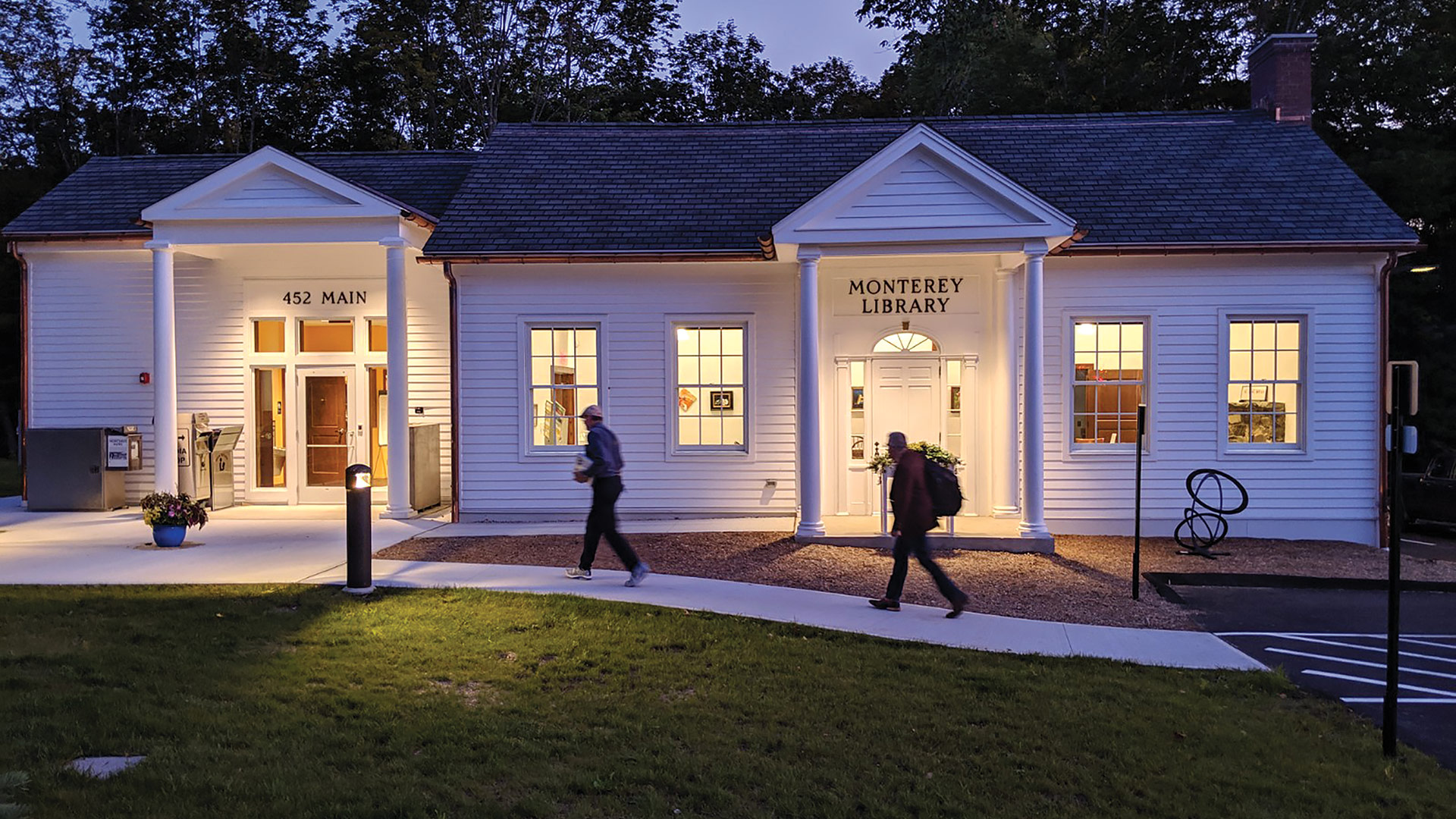 The library in Monterey is one of more than 200 that have now been visited during the Library Land Project.

To date, their work has revealed a number of architectural gems, somewhat hidden treasures, and, yes, a host of intriguing places where people can bring a laptop — or not — and get some work done.

To get that point across, they summoned an anecdote they retell often as they explain their project and the value of public libraries.

“We had one particular client contact … he was always just really busy when we met with him in his office,” said Zand. “He was distracted by his desktop computer, requests for meetings, and phone calls. So we said, ‘there’s a beautiful library in Lincoln,’ which is one town over from where he was. ‘ Come with us and we’ll meet there.’ We got him out of the office, and we were super-productive, and we have a lot of stories like that.” For this issue and its focus on business innovation, BusinessWest talked with Zand and Peverill-Conti about the Library Land Project and what they seek to accomplish through this massive undertaking.

Peverill-Conti said this project — this journey — began, essentially, because he and Zand didn’t have a traditional office as they carried out their work at SharpOrange, so named because they both like the color —Peverill-Conti wears something orange every day, and Zand went to Syracuse University — and SharpOrange was considered the most attractive among the options for which they could still get a URL.

“When we started, we didn’t have offices, and we still don’t,” said Peverill-Conti. “We didn’t want to work from home; I live in Natick, and Adam lives in Arlington, so we decided to meet somewhere in between — the Newton Free Public Library in Newton.

“It was great — they had nice study rooms, fast wi-fi, plenty of parking, and we had a very successful meeting there,” he went on. We decided to do it again, but, because we’re curious people, we decided to try a different library.”

Zand said this collective curiosity took them to neighboring communities such as Wellesley, Weston, Wayland, and others, and each visit essentially inspired more.

“Both of us have been in the PR and marketing business for more than 25 years each,” he told BusinessWest. “And there’s something about the excitement of visiting a town we knew of but maybe had no idea what the library was like and finding out if they had study rooms, finding out what the libraries were like.

“We started noticing differences in the libraries, whether that was parking or access to wi-fi or things like study places and quiet places to work,” he went on. “And Greg is kind of a quantifier by nature, so we came up with a formal approach to rank them.” 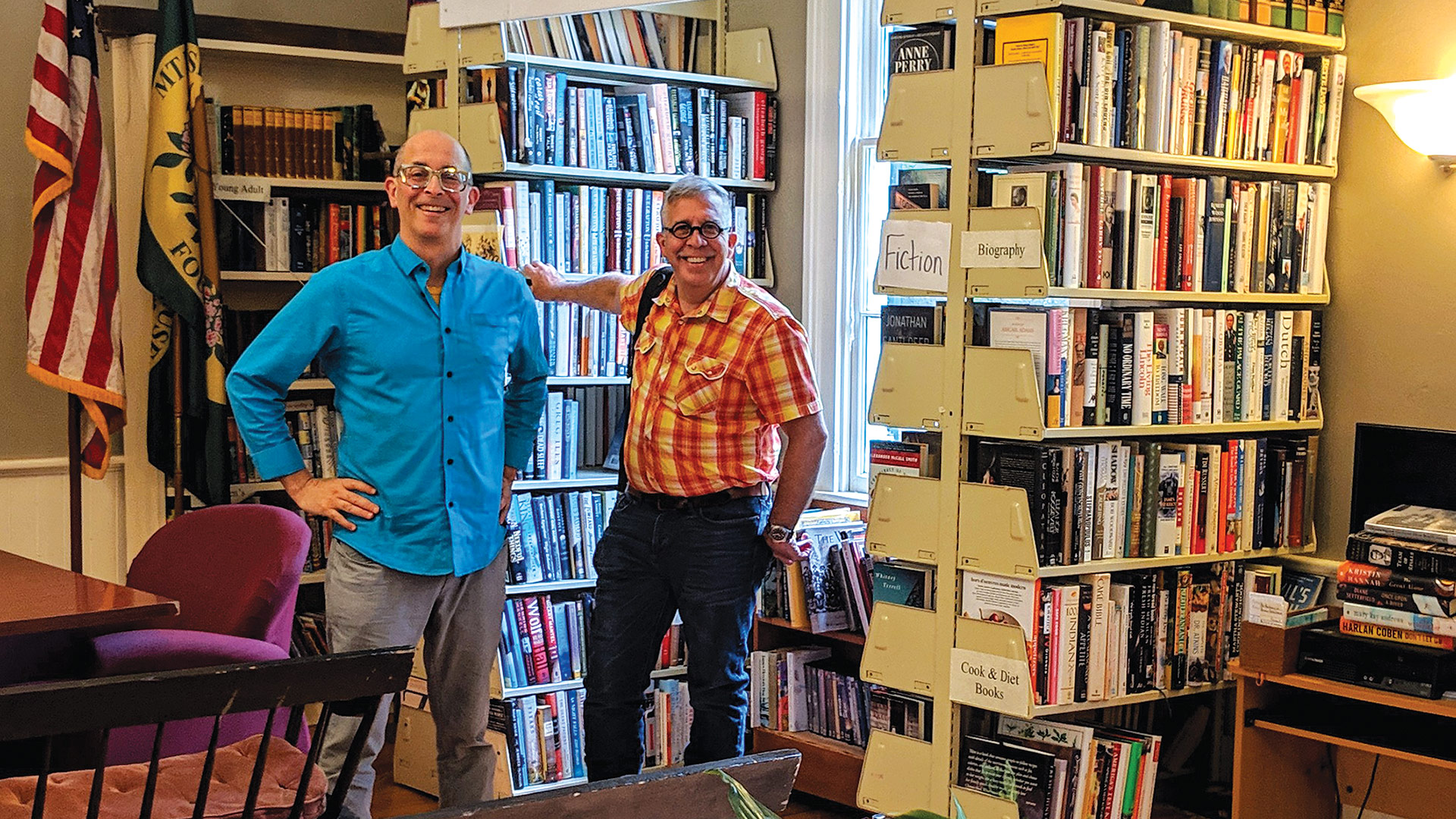 When Zand and Peverill-Conti visit a library, they rate it on 11 criteria, many of them somewhat subjective in nature — parking/transportation, wi-fi, meeting rooms, condition, ‘completeness,’ community, friendliness, restrooms, noise, comfort level, and a category they call ‘good place to work?’ Up to five points are awarded for each category.

Thus far, just one facility — the Gladys E. Kelly Public Library in Webster, southeast of Worcester — has earned a perfect 55, but several, including the Woburn Public Library, the Hamilton-Wenham Library in Hamilton, the Cambridge Central Library, and the Groton Public Library, have just a 4 or two on their scorecard, with the rest 5’s. At the other end of the spectrum, several branches of the Boston Public Library and facilities in Lynn and Belmont did not score very high. In the 413, Pittsfield’s facility was toward the bottom of the list, with decent scores in most categories, but poor showings in work space and friendliness.

As for the library for bears in Mount Washington, as one might expect, it didn’t get high scores for meeting rooms and completeness, but it earned a 5 for wi-fi, friendliness, noise, and comfort level, and, overall, a 3.91 rating, putting it firmly in the middle of the pack.

In 2018, the two visited roughly 100 libraries, and by June of this year they had doubled that number, picking up the pace, as Peverill-Conti noted, adding that, as they met with clients at their places of business in various communities, they would make an effort to also visit that town’s library, thus turning another pin orange. 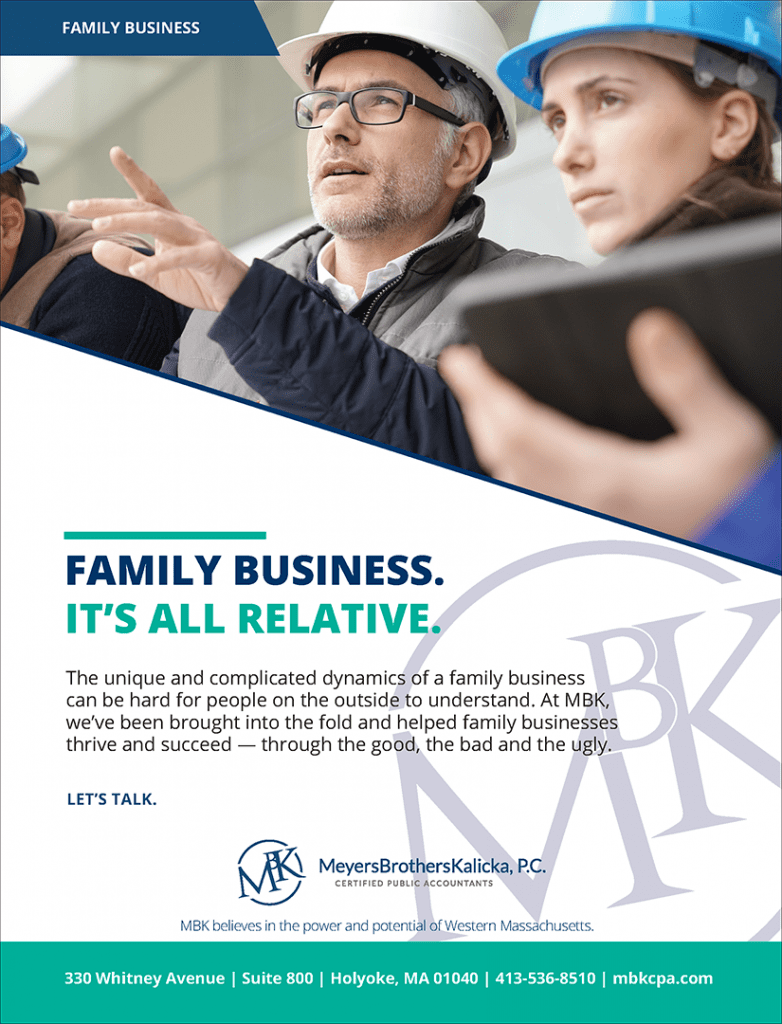 And while ranking the libraries, they will also write what amount to reviews, also posted on the website. Here’s what they had to say about that library with the perfect score:

“The Gladys E. Kelly Public Library in Webster has everything we look for in a library — and then some. Plenty of free parking? Check. Fast and easy wi-fi? Check. Comfortable study rooms? You bet! The scorecard says it all — and yet there’s so much more to say.

“The exterior is glass and dark wood and slate and brushed metal, rising up from a grassy area, and older town buildings and a gazebo. It’s stylishly modern, but the materials make it feel almost classical in a way, especially the tall, dark, and handsome wooden columns. Once inside, you find yourself in a big, bright, open space with tons of natural light pouring in from above. Before you is the circulation desk, which has some amazing bevels…

“Another thing that makes the Webster library so stunning is the fact that this isn’t a big city or super-affluent suburb. It’s an old mill town that managed to secure solid funding from the state, raised additional funds through active friends’ efforts, and won the support of voters. The result of these efforts is a truly amazing library — the nicest new construction that we’ve seen here in Massachusetts. The staff is rightly proud of their library, and while it may be a bit off the beaten path for some, it’s well worth the effort to visit if you love libraries.”

Overall, Peverill-Conti and Zand note that, while they are, indeed, rating each of the facilities they visit to provide a resource to those who might use them, perhaps their larger goal is to simply bring attention to public libraries as an attractive alternative workplace.

While there are still a number of libraries to visit, especially in this region, they believe they’ve already accomplished that mission.

As Zand said, libraries may be the original co-working spaces, but they’re still among the best.