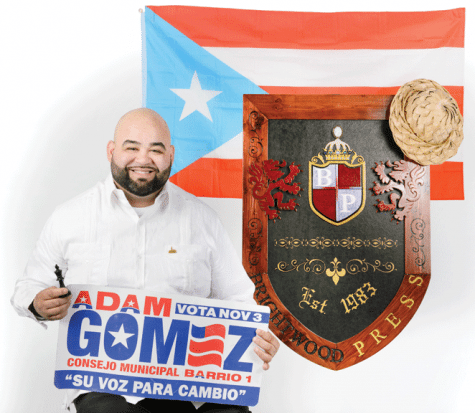 Whether it’s serving his neighboring business owners through his printing and marketing outfit, Brightwood Press Co., or as their newly elected Ward 1 city councilor, Adam Gomez is a man of the people.

Indeed, his service in the realm of civic leadership is extensive. In addition to his councilor duties, Gomez also serves on the New North Citizens’ Council board, the Springfield Puerto Rican Parade Committee, and with Neighbor to Neighbor — a statewide nonprofit that educates residents on voter registration and social issues.

Through his role as national liaison for the Gamma Phi Sigma fraternity, also known as Hermano Unidos, Gomez has organized and promoted annual basketball tournaments for the past seven years, which raise funds for youth scholarships and also represent one of many anti-violence events and programs with which he’s actively involved.

But service to community is a common thread through all of his endeavors, both professional and volunteer, and Gomez says the coming months are packed with myriad tasks aimed at bettering the city he’s always called home, particularly its North End and the neighborhoods he now represents.

“Ward 1 wants to grow with the city — as fast as every ward,” he said. “There have been a lot of developments, and we’re in a good place. One of my goals will be to unite neighborhood boards, councils, youth organizations, and nonprofits so we are all working together.”

He’s also looking toward further collaboration with the business community in the North End, as both a city representative and fellow business owner.

Brightwood Press works extensively with downtown clubs and restaurants, for instance, as well as several nonprofits, including Springfield schools, Baystate Medical Center, and the Puerto Rican Cultural Center. Gomez said his focus is on offering fair prices and services most relevant to his core customers.

“If small businesses or nonprofits are overcharged, they can’t stay marketable,” he said. “My people — my customers — need niche services, and that’s what I provide as an entrepreneur who’s also invested in the ward.”

He’s also looking toward safety initiatives, particularly those aimed at reducing violence, and the role both businesses and residents can play in their success.

“I was born and raised in the North End, and I’ve encountered several mentors,” he said. “I want to keep on motivating young people to get involved and support the community. Our parks and schools need to be up to par, our streets need to be safe, and right now, there is a lot of opportunity.”