First-ever 40 Under Forty Reunion on Tap 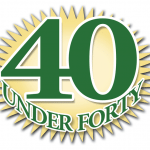 “I’ve had conversations with many 40 Under Forty honorees who’ve said they wish there were a way they could get together with other winners for a networking opportunity,” said Campiti, associate publisher of BusinessWest, adding that many of these individuals value their standing in what has become a highly desirable club throughout Western Mass.

“They include their status as a 40 Under Forty winner on résumés, in e-mail signatures, and when talking with clients and potential clients,” she noted. “Not only does this honor open doors for them, but they also give other honorees a preference on business relationships over other individuals and companies without a 40 Under Forty title.”

Given that reality, a reunion event was only a matter of time.

“After having these conversations and realizing the fraternity that has been made of 40 Under Forty honorees, we decided to give them what they asked for with a reunion exclusively for the 40 Under Forty winners,” Campiti said.

That event will take place the evening of Feb. 7 at the Log Cabin Banquet and Meeting House in Holyoke, which has hosted several 40 Under Forty events. This high-energy networking event is exclusively for the 40 Under Forty winners from the classes of 2006 through 2012, as well as judges and sponsors. The evening will include hors d’oeuvres and entertainment, as well as a high-profile speaker, Health New England CEO Peter Straley. Overall, said Campiti, this will be an ideal venue for the 240 past honorees to meet each other and build relationships.

Jaimye Hebert, a 2011 honoree who served as a judge for the class of 2012 (see story, page 13), plans on attending, adding that she’s grateful for the opportunity to be a part of the 40 Under Forty legacy.

“It’s such a great event,” said Hebert, vice president at Monson Savings Bank, of the annual June gathering celebrating the year’s winners. “I call it the best networking event of the year for the region.”

Campiti said the Feb. 7 reunion, which is being sponsored by Bacon Wilson, Fathers & Sons, Moriarty & Primack, Northwestern Mutual, and Paragus Strategic IT, will take that annual opportunity to make connections to the next level by assembling an elite who’s who of Western Mass. professionals.

“We’ve said this before,” she noted, “but the 40 Under Forty program has become a status symbol and level of achievement that many of the young professionals in our region aspire to. Each year, we’ve seen an increase in the number of nominations we receive, and those nominations span every sector and industry.”

With the support of groups like the Young Professional Society of Greater Springfield and Northampton Area Young Professionals, which have both encouraged nominations from their ranks and seen many members achieve the award, the 40 Under Forty program has even created a competition of sorts for young up-and-comers.

“We’ve heard directly from previous winners and those vying for the honor who said they had increased — or are increasing — their volunteerism on various nonprofit boards, as well as their business skills, by taking courses and working with mentors, in an effort to be worthy of a 40 Under Forty award,” Campiti said. “This healthy competition only helps our region by strengthening our young professionals and future leaders.”

The reunion also coincides with nomination season for the class of 2013. Nomination forms may be found on page 17 of this issue or at businesswest.com, and entries will be accepted through Feb. 15.

“Each year, not only does the number of nominations increase,” Campiti said, “but so do the breadth and depth of the nominees, their skill sets, the industries they work in, their volunteerism, and their commitment to the health and vitality of our region. I think we’re all a little surprised, and pleasantly so, that the nominations we’ve seen come in show no sign of dwindling in quantity or, more importantly, quality.” n

Maggie Bergin The Art of Politics

Maurice Powe The Law Offices of Brooks and Powe