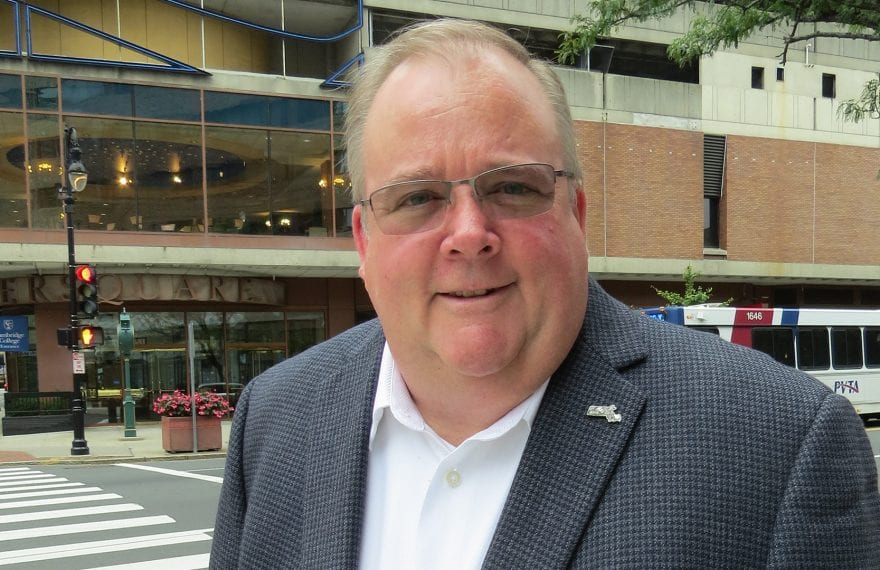 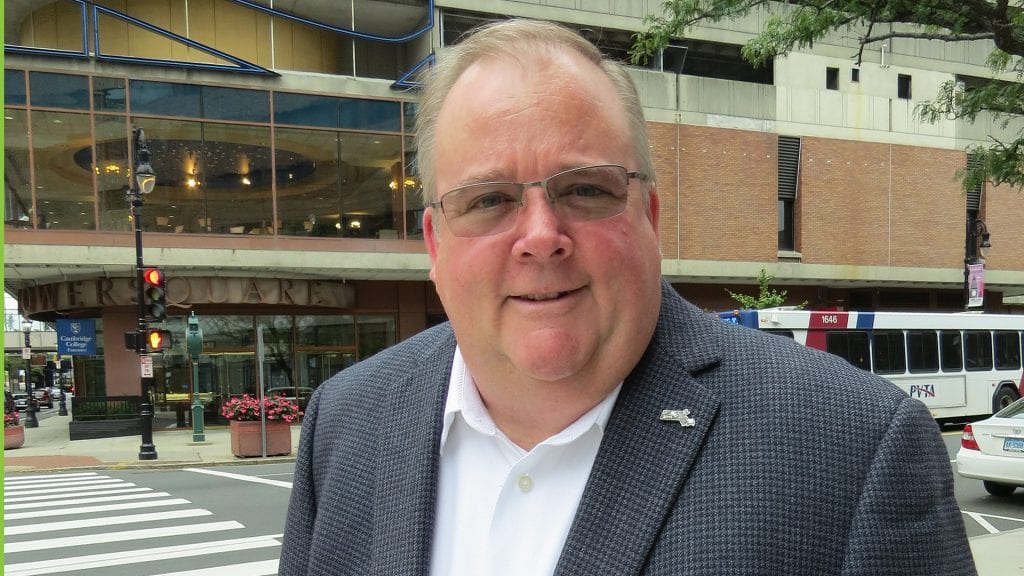 John Regan says Associated Industries of Massachusetts (AIM) recently surveyed a cross-section of its members regarding the economy, the direction they believe it will take, and the steps they are themselves taking as a result.

Roughly 75% of those surveyed anticipate an economic contraction before the end of 2020, and a sampling of the gathered remarks hints strongly at an undercurrent of caution, if not outright concern:

• “Scaling back on hiring plans; slowing down certain capital expense/equipment purchases until we get a clearer picture of what the next six months will bring.”

• “We have temporarily eliminated overtime, which was formerly unlimited.”

Slicing through all that, Regan said AIM’s members are looking at the conditions, gauging how they will effect things short-term and long-term, and, by and large, deciding not to take on too much until the picture becomes much clearer.

And, as the organization’s new president and CEO — he took the helm in May — he is essentially advising the state to do the same.

“A possible takeaway from the survey for state policymakers as they begin considering billions of dollars in new spending is this could be a difficult time ahead for the state economy,” Regan told BusinessWest. “Businesses are assuming a defensive posture, and significant tax increases — beyond the $1 billion for the new paid family and medical leave system — even for worthwhile causes, could harm the overall economy, most especially the manufacturing sector.

“This might not be the time to really go all in on lots of different tax proposals,” he went on, listing everything from new spending initiatives to the so-called ‘millionaires’ tax,’ a step he believes will pose dire consequences for the Commonwealth. “Legislators should do what our members who answered the questions are doing — delaying their ambitious agenda and letting the things they’ve already done take their course and put some away for a rainy day.”

Passing on members’ concerns about the economy and urging caution when it comes to business-related legislation are two of the many lines on the job description for AIM’s president, said Regan, who moved to the corner office after a dozen years as AIM’s executive vice president of Government Affairs and almost two decades with the agency in that realm.

Another line on that job description involves presiding over annual ceremonies such as the one staged earlier this month at Wistariahurst in Holyoke, at which three area companies — MGM Springfield, American Saw, and Peerless Precision — were presented with Next Century and Sustainability awards for their efforts in creating the next era of economic opportunity for state residents.

A few hours before that ceremony, Regan sat down to talk with BusinessWest about a variety of topics, including his appointment, the state of AIM and its 3,500 members, and even his thoughts on how to achieve more balance between east and west in the Commonwealth.

But the condition of the economy and the results of that aforementioned survey soon dominated the conversation.

Regan noted that, overall, the state’s economy continues to expand, albeit at a slower pace than earlier in the year. Meanwhile, AIM’s Business Confidence Index, generally a reliable barometer of economic conditions, remains in optimistic territory (58.9), although it has lost nearly four points over the past 12 months. Unemployment remains low (2.9%), and private employers created nearly 7,000 jobs between August 2018 and August 2019.

Still, there are some ominous warning signs of a recession, and a number of businesses are already starting to feel the effects of tariffs and other federal and state measures, said Regan, adding that these businesses are starting to play defense — and the state should do the same.

If Regan seems to know his way around the State House — in every sense of that phrase — it’s because he does.

Indeed, before coming to AIM, before serving as vice president of Operations for MassDevelopment and leading its efforts to repurpose Fort Devens, before directing the Massachusetts Office of Business Development (MOBD) for five years, and even before serving as chief of staff to the mayor of Marlboro, he worked in the State House, first as a researcher on the Joint Committee on Banks and Banking, and then as a special assistant to the House Ways and Means Committee.

“I started out on the constituent side, and quickly moved to the policy side,” he said of his work with the Legislature. And, on many respects, he has remained on the policy side ever since.

When asked how he went from working for the state to becoming an advocate for its business community, Regan said there’s a story there. It involves the former Lunt Silversmith (an AIM member) in Greenfield, he recalled, adding that, as director of MOBD, he was asked to help convince the state Highway Department to put up signs that would direct motorists to the company’s new showroom facility. Long story short, he played a big role in getting the signs up.

“AIM was so impressed that state government actually got something done that they asked if I would consider joining the agency and its Government Affairs Department,” he recalled. “At the time, I wasn’t really looking, but I knew AIM from my days at the State House — it was a well-respected group and well-regarded in the building — and I thought this was a good opportunity for me.

“I never wanted to be a lobbyist in that sense that you’re out chasing clients to represent individually,” he went on. “The opportunity to come to AIM represented a chance to use my relationships in the building, but not lobbying for individual clients; at a 3,500-member organization, you’re working on policy, not just individual company issues.”

And over the years, he has advocated for members on issues ranging from unemployment-insurance reform to non-compete agreements; from pay-equity law changes to paid family and medical leave.

Since taking over as president and CEO, Regan said he spent much of the first several weeks focusing largely on internal matters, including membership, marketing, finances, technology, and hiring his successor in Government Affairs — Brooke Thomson, formerly with AT&T.

“I wanted to make sure I understood the parts of AIM I never really had to worry about as head of Government Affairs,” he noted. “And part of what the board charged me with was coming up with an operational plan for the balance of 2019 through 2021.

“It’s not a strategic plan,” he went on, “but just making we’re able to explain what we thought we could do and should do, and get that on paper and in front of the board.”

These days, though, he’s more focused on the Commonwealth’s businesses, the uncertain state of the economy, and policy matters, such as helping to secure a three-month delay in the start of payroll deductions to fund the program.

Returning to that recent survey of members, Regan said it is quite revealing and clearly depicts both the concern felt by business owners and their commitment to act responsibly, and defensively, in such a climate.

“They’re doing the things you might expect,” he noted. “They’re saving money versus investing it, and they’re only doing capital projects that have a very swift return on investment. They’re looking for additional, profitable product lines that might allow them to weather the storm. But mostly, they’re thinking ahead and being ready.”

And this is the mindset Regan believes both the federal and state governments should embrace given both the current conditions and the possibility, if not likelihood, of a recession in 2020.

With the former, Regan noted that tariffs and the trade war are already taking a steep toll — on manufacturing but also other sectors of the economy, including agriculture — and the threat of more such actions loom large over the state and the region.

“Uncertainty around trade, in particular, grows by the day,” he said. “It seems like every day you wake up and there’s another round of tariffs. One of our longest members is Ocean Spray cranberries, and they’re getting killed by tariffs.”

As for the State House, Regan said lawmakers there should consider the current economic conditions and the threat of recession as they ponder additional mandates and taxes, including what is known officially as the Fair Share Amendment, but has been dubbed the millionaires’ tax.

That name conjures up thoughts of rich people sitting on a beach, he told BusinessWest, but the reality is that most of those who would be impacted by this measure, which would impose a 4% income-tax surcharge on annual income beyond $1 million, are business owners, as in the small to medium-sized business owners who dominate the state’s economy and especially the Western Mass. economy.

And recent research, including an in-depth report by Bloomberg News, shows that individuals hit with such taxes often leave for safer havens, taking their income with them, he noted.

“Bloomberg found that Connecticut, New York, and New Jersey face the largest financial drains from the 5 million Americans who move from one state to another each year,” AIM wrote in a recent blog post, citing other states that had passed taxes on high earners. “Connecticut lost the equivalent of 1.6% of its adjusted gross income, according to Bloomberg, because the people who moved out of the Nutmeg State had incomes that were 26% more, on average, than those people who moved in.”

Regan agreed, and said these numbers paint a grim picture and present a competitive disadvantage for the Commonwealth, one the Legislature should consider as it moves closer to joining other states in enacting such measures.

“I love it when elected officials roll out statistics that show ‘30 states do this’ or ‘20 states do that,’” he said. “We can tell them we have a whole list of states that have tried the wealth-tax approach, and it’s bombed, and they say, ‘well, that’s different.’

“How is it different?” he went on. “How are we not going to experience the same things that they’ve experienced?”

Returning to that survey of AIM members, a few of the business owners polled expressed confidence about riding out what appears to be a storm on the horizon.

“We think we’ll be immune from the contraction,” wrote one, while another said, “our industry is counter-cyclical; when the economy contracts, our industry usually receives a boost.”

Those sentiments don’t apply to most businesses, certainly, and Regan knows that. And that’s why AIM’s new president and CEO is working hard to convince lawmakers to do what his members are doing — what’s best for business and what’s best for long-term economic health. 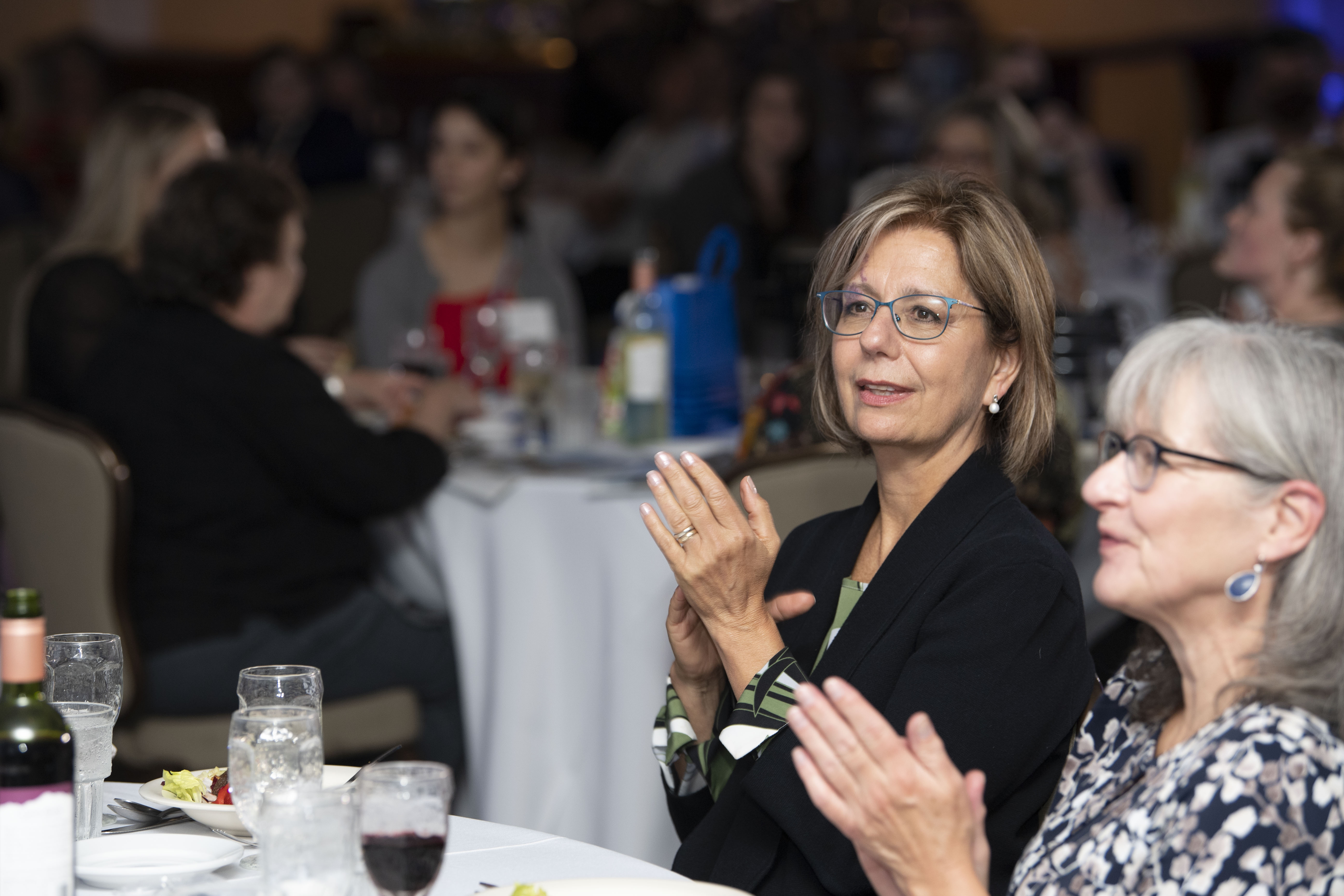