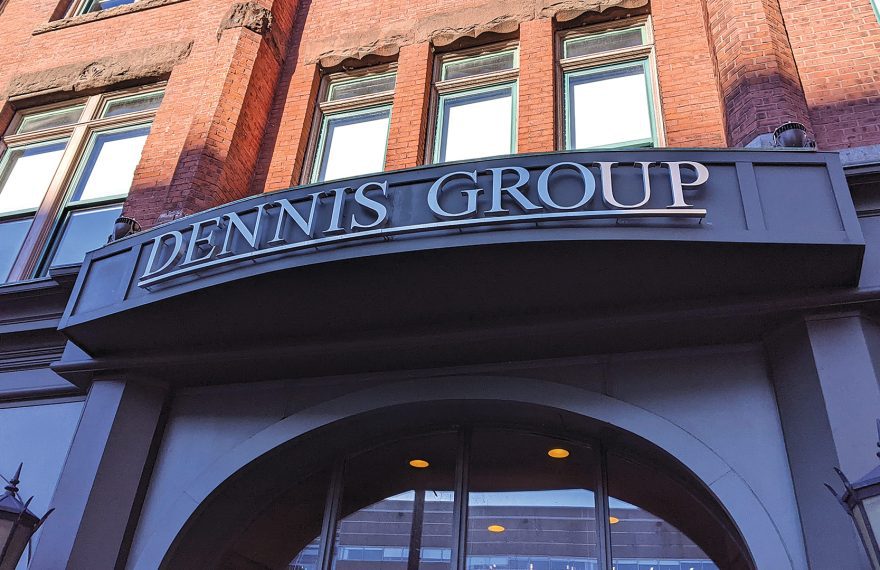 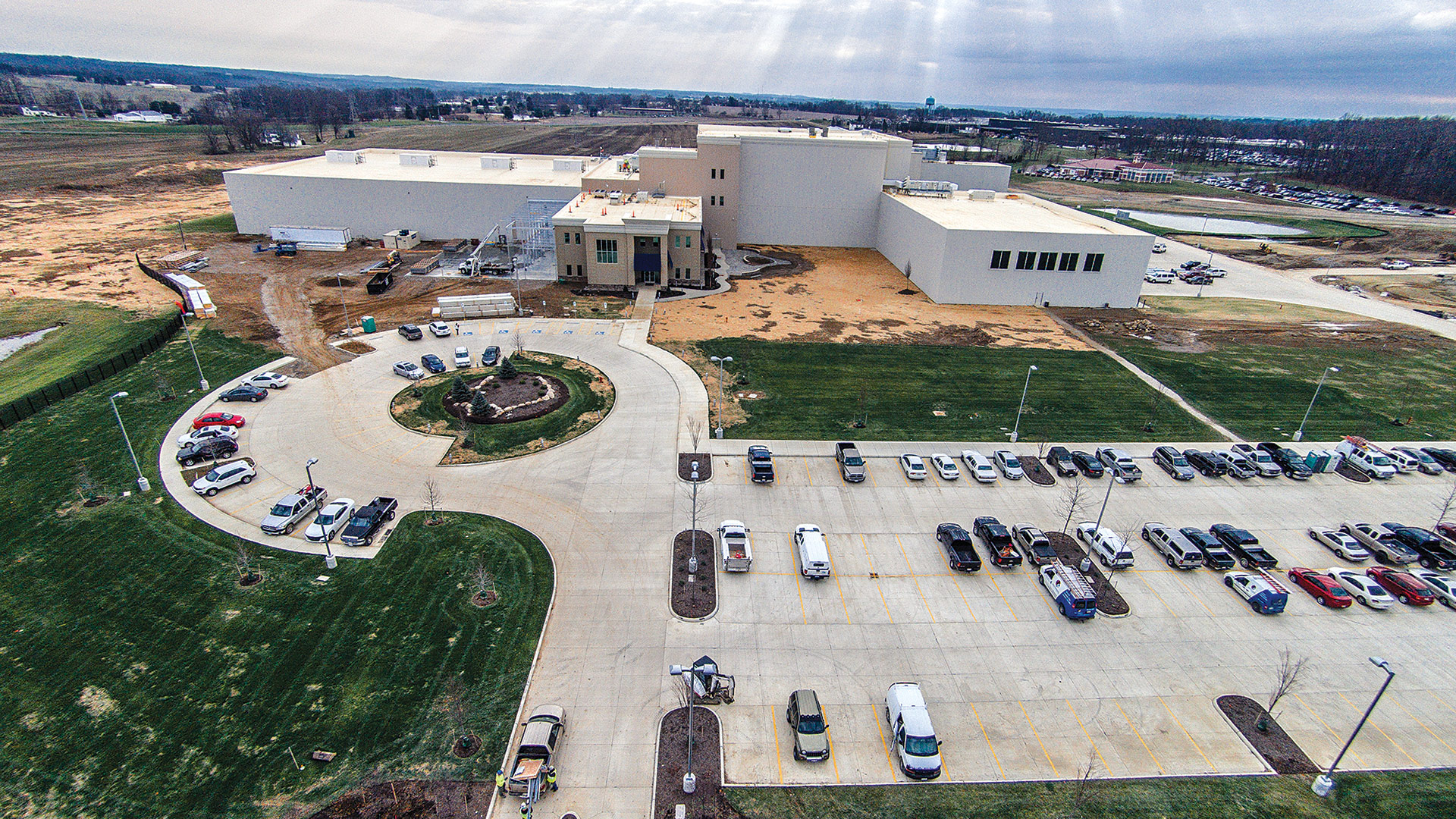 This aerial photo is of a large Dennis Group project under construction in Ohio.

At any given time, the Dennis Group is working on 400 to 500 projects around the world. But you wouldn’t know it by looking around New England.

Sure, it’s worked with Agri-Mark in West Springfield, Pepperidge Farm in Bloomfield, Conn., and a host of other companies locally over the years, but food-production plants — and that’s exclusively what this design-build engineering firm works on — tend to be bunched in certain pockets of the country, and for good reason, said Mike Damiano, head of the company’s process engineering group.

For example, “Pennsylvania supplies the Northeast. That’s a big distribution corridor. All the major players like to be within a stone’s throw of each other,” he noted, adding that other clusters are located in Ohio (serving the Midwest), Georgia (the Southeast), Texas (the South), and California (the West Coast). “We have a lot of work local to our Utah office, which seems abnormal, but it’s a growing area. A lot of it is about logistics, and where they can get to as many places in the U.S. as economically as possible.”

Damiano said the Dennis Group performs full-service engineering for the facility side of the production systems. That involves detailed design work, procurement of equipment and workforce, and management of the construction of the plant. “We don’t self-perform any construction activities, so we’re design-build in the sense that we do construction management.”

Up from the Attic

The Dennis Group has witnessed explosive growth since it was launched by founder — and still president — Tom Dennis in his attic in 1987. It now boasts about 200 employees in its headquarters in the Fuller Block building in downtown Springfield, and another 400 in seven satellite offices: in California, Georgia, Michigan, Utah, Brazil, and two in Canada.

Some of this success can be traced to timing — specifically, an explosion in the popularity of convenience-based foods and the recession-proof (and, as it turns out, pandemic-proof) nature of the food industry.

“A lot of it is about logistics, and where they can get to as many places in the U.S. as economically as possible.”

Each project begins with a concept, Siart said — a new product a company wants to develop or an existing product for which it wants to ramp up production. After a definition study, which is a report defining project scope, scale, cost, and schedule, the study is handed off to the food manufacturer for approval, with projects ranging anywhere from $1 million to $1 billion in cost.

One reason for the Dennis Group’s sustained success — it has topped Engineering News Record’s annual rankings of the top food and beverage engineering firms by revenue in numerous years — is due to its ability to tackle new industry trends, which constantly drive the design and construction of new plants.

For example, Damiano said, “we’ve been doing a lot of vertical farming, which is kind of new — it’s like a warehouse with an indoor greenhouse.”

That has helped stores keep ever-popular bagged salads on shelves longer because they’re arriving in stores sooner, particularly in the Northeast, said Nathan Marcucci, a process engineer and head of the firm’s project management group. 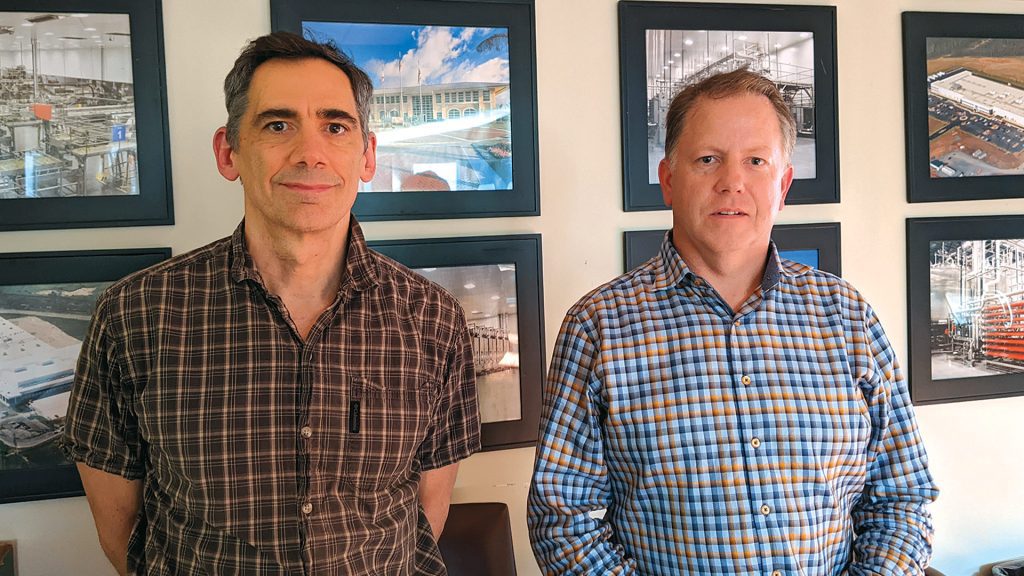 “Bagged salads were always field harvested, and you had only a few days to get that salad from the field to somebody’s house,” he explained. “Now, with an indoor vertical grow facility in the Northeast in the wintertime, you can get that bagged salad to the consumer in the Northeast quicker, so it lasts longer. So it’s a combination of new technologies that invigorate some of these older products.”

The Dennis Group has also worked with the Impossible brand on alternative meats, ridden a wave of Greek yogurt and alternative milk production when those products became popular, and worked with Ocean Spray on Craisins.

“That used to be a byproduct; they used to pay to have it hauled away,” Damiano said. “Then they turned it into a product that was more profitable than the juice. The juice became a byproduct on the Craisins line. They basically flipped the table.”

Much of the product innovation in supermarkets begins with smaller companies and gets picked up by larger ones when products become popular. Larger companies are often hesitant to step out of their comfort zone, like J.M. Smucker, a repeat client that has long focused on peanut butter and jelly — and premade Uncrustables sandwiches — as well as a line of pet food. The Dennis Group is currently working on its third Smucker factory; a recently opened facility in Colorado was named Food Engineering’s Plant of the Year for 2020.

Sometimes innovation in the way food is packaged drives plant production as well, Marcucci noted, such as a move toward squeezable containers some years back for everything from peanut butter to yogurt.

When the pandemic hit in 2020, Marcucci said, some jobs got put on hold, but the Dennis Group experienced no real downturn. In fact, demand soared for certain food products, like those aforementioned Uncrustables when kids were largely stuck at home.

“When the economy gets tough, people have less money to buy food at restaurants, so they want pre-made grocery food,” Siart said. “That’s when our clients’ orders go through the roof; they can’t keep up with the orders.”

And that’s when they call on the Dennis Group, which has developed a worldwide reputation in its engineering niche.

“There’s nobody with the title ‘salesperson’ in the company,” he added. “The way we look at it here is that everybody’s a salesperson. You’ve got to do good work to bring in repeat customers, and 80% to 90% of our work is repeat customers; basically, large food manufacturers come back to us and do multiple projects.

“A smaller percentage is new clients that are finding us through different ways — people moving from one company to another,” he went on. “Someone might have been working for Nestlé and is now working for another food company, and work comes to us through word of mouth from former clients. Some of it’s cold calling. Some of it’s someone doing a Google search and finding Dennis Group that way. That’s how our sales work: repeat business and word of mouth.”

It’s business the company’s leaders don’t expect to slow any time soon, if the way people shop — and the convenient products they desire — is any indication.

“Food is essential,” Damiano said. “If you go to the grocery store, you have that one section of fresh produce; everything else is processed. The minute people stop buying processed food, we’re in trouble.”