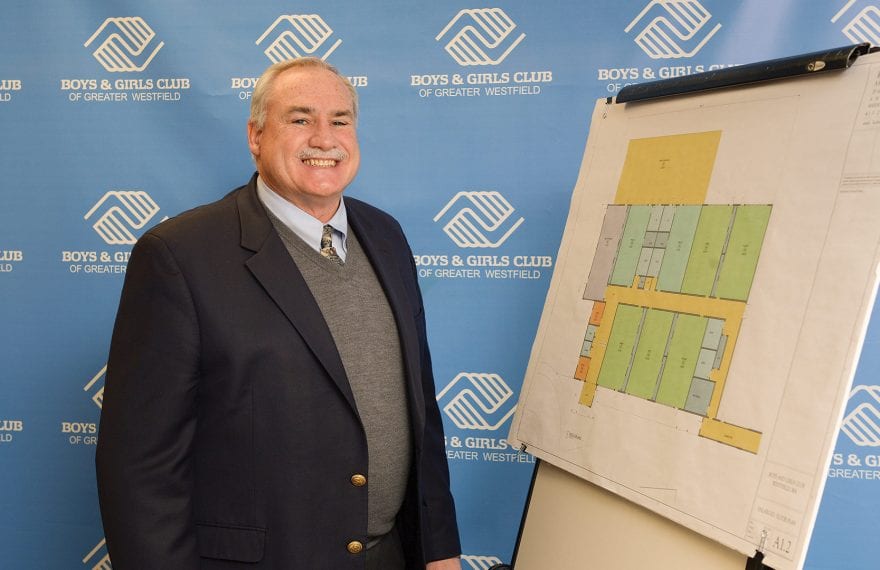 For This Youth Leader, Opportunities Make All the Difference 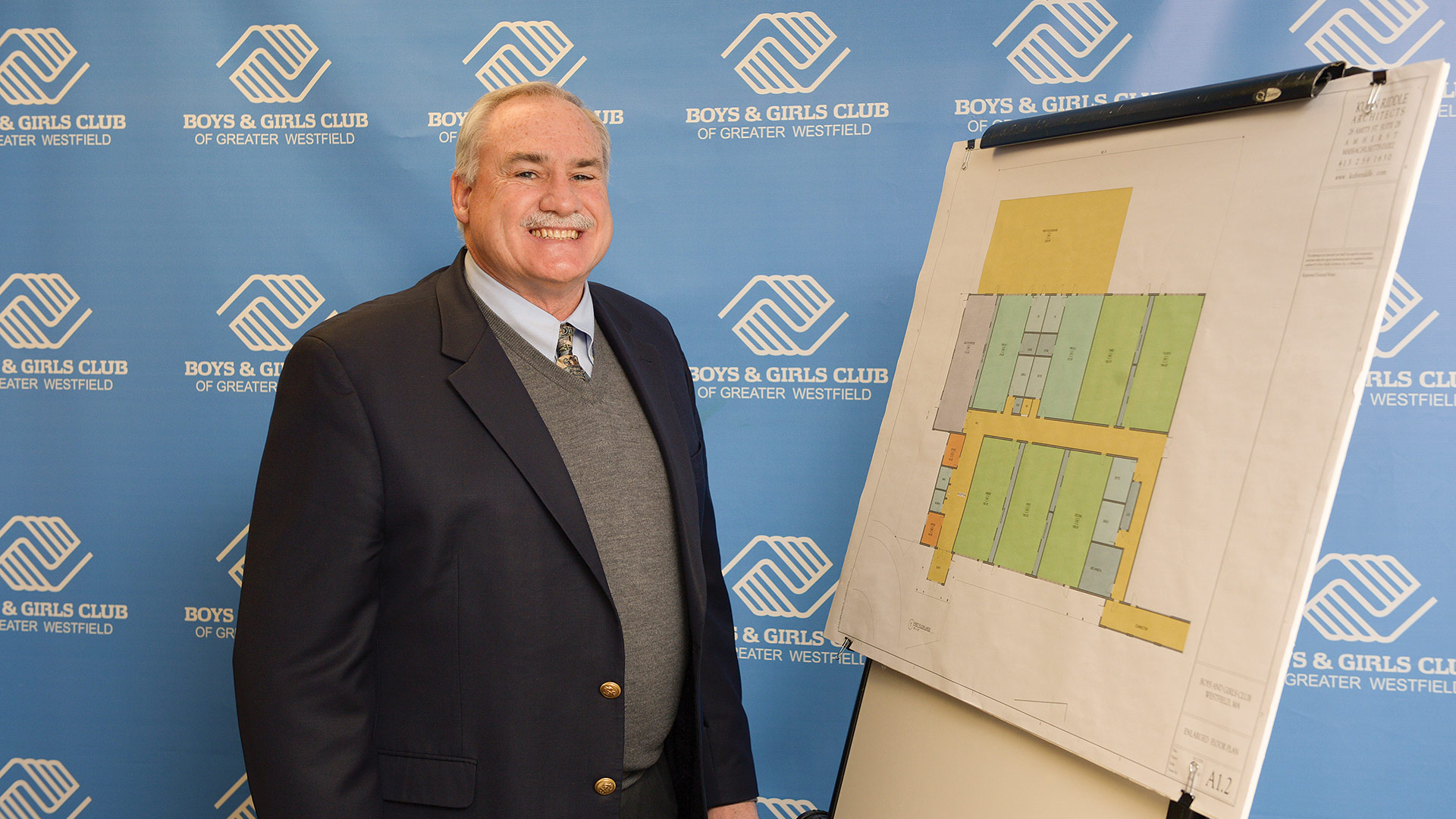 Bill Parks like to tell the story of a former ‘Youth of the Year’ at the Boys & Girls Club of Greater Westfield who was discussing possible careers with a staff member.

“She wanted to be a marine biologist but said, ‘I know that will never happen,’” Parks recalled, but the staffer assured her that her desire was most certainly possible. This led to numerous conversations with the young woman about what she could do at the club and in her studies to make this dream a reality.

“He convinced her to think in terms of ‘yes, I can do this,’” Parks said. “Today, she is working in Florida as a marine biologist.”

And it’s not a surprising outcome to someone who believes life is about opportunities and relationships. As the club’s executive director, he follows this guiding principle, which, as much as anything else, is responsible for his being named a Difference Maker.

His own experience with the Boys & Girls Club actually began when he was a young boy attending the Marlborough Boys Club. He enjoyed going there because it was a place to meet up with friends, play basketball, and take part in activities. At that time, the club was for boys only, but Parks credits his sister with breaking the gender barrier and becoming the first girl to become a member.

“We snuck her into a Halloween party one year,” he said with a laugh. “After we did that, the staff decided to allow girls be part of the club.”

Once in high school, the club provided Parks his first job. “I worked at the gym, in the game rooms, and at the front desk,” he remembered. “It taught me how to deal with the public and how to work with kids.”

As a basketball player for Marlborough High School, Parks was recruited to play basketball at Fitchburg State College, allowing him the opportunity to become the first member of his family to attend college.

“That small gesture, to make sure I could go back to school, had a huge impact on my life. I’ve never forgotten it, and it’s been a goal of mine to always pay that forward.”

But the Division III college does not award scholarship money for athletes, and his parents — his father worked in a shoe factory, and his mother provided day-care services in the home — couldn’t afford to send him. To make matters worse, a local bank rejected his student-loan application.

Parks was worried he would have to give up his college plans, but when the club’s executive director heard about the rejection, he got involved, and gave Parks the name of a banker at First National Bank of Marlborough who was willing to approve the loan request. “You’re all set,” Parks recalled the director telling him. “You’re going back to school.”

It’s a story he recalls often as a moment that changed him forever. “That small gesture, to make sure I could go back to school, had a huge impact on my life,” he said. “I’ve never forgotten it, and it’s been a goal of mine to always pay that forward.”

By paying it forward through his role at the Boys & Girls Club of Greater Westfield — by helping other young people act on opportunities they don’t see as possible — Parks is truly a Difference Maker.

While the story of the marine biologist is inspiring, Parks told BusinessWest, it’s not really about any particular job.

“It’s more important for young people to see the opportunities they have to develop their futures,” he said. “Our latest campaign is called ‘Building Futures’ because that’s who we are and what we do.” 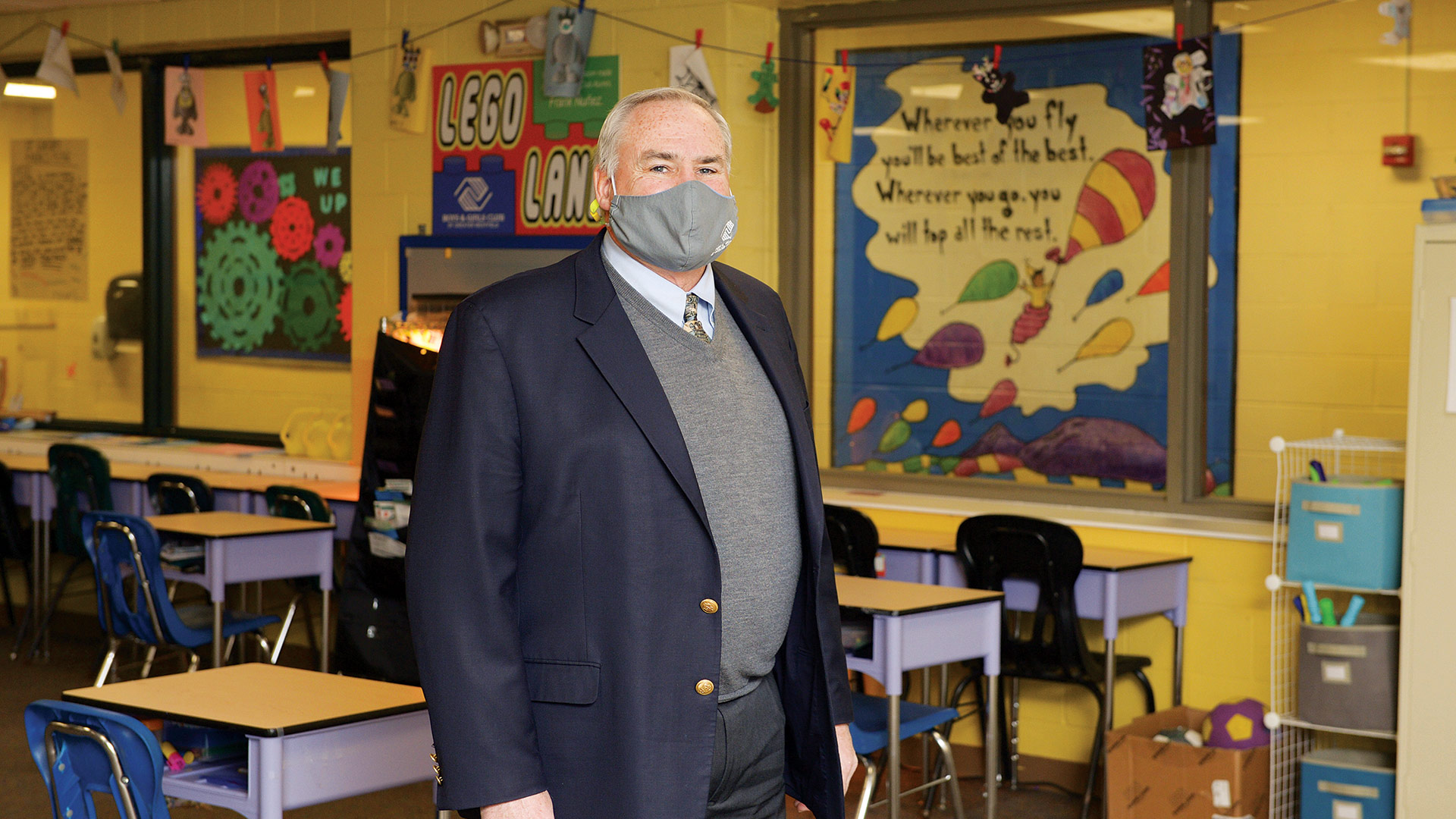 Education has been a driving force in Bill Parks’s life, and he emphasizes its importance to those he serves.

Parks’ professional career with the Boys & Girls Club began in Eastern Mass., serving as executive director for clubs in Billerica and Waltham. Before he joined the Westfield club in 2004, he spent two years with the Jason Foundation, where he helped introduce STEM programs to Boys & Girls Clubs on a national level.

While he enjoyed the work at the foundation, he missed the interaction with all the staff and families who form the culture of a Boys & Girls Club. He found that again in Westfield, which was, in some ways, a return to his geographic roots, as he was born in Springfield and moved to Marlborough as a young child.

Applying what he’d learned in his earlier executive roles, Parks began to lay out a vision and a course of action for the Westfield club. He also understood that he could not accomplish his goals alone but needed to convince others to get behind his vision.

“One of the things I am most proud of is that people in the community wanted to be part of the vision we had for the club,” he said.

Parks credits his staff for helping to make the vision a reality. Many staffers have long tenures on the job, and several started there even before he arrived.

“When you can maintain your existing staff, it allows you to do big things because you are not constantly changing people and roles,” he said, adding that the staff has also grown to 12 full-time and more than 40 part-time workers, making the organization a “decent-size employer in the city.”

A dedicated and consistent staff that gets results, he noted, makes it easier to attract potential donors. One donor told Parks he supports the club because he is confident that the contribution will generate efforts to help young people succeed, adding, “I like what you are doing, and I believe it will have an impact on our community.”

The role of Boys & Girls Clubs today has greatly changed from the days when Parks played basketball with his friends in Marlborough. Once he began his career there, he saw education becoming a more vital part of the organization’s mission. 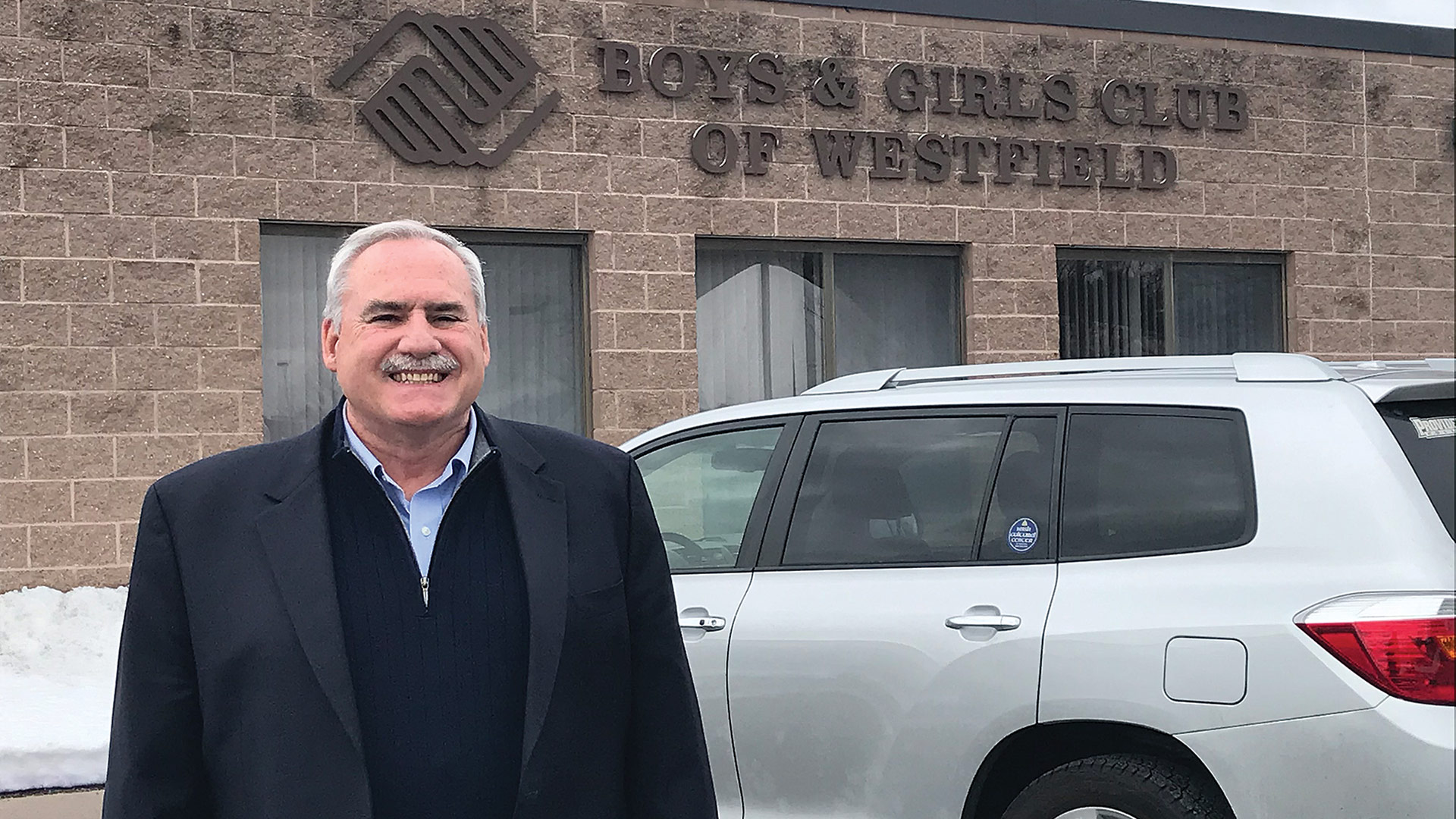 During the pandemic, Bill Parks says, the club became a critical resource for both kids with their remote learning and their parents who had to work.

“It was easy to see that, in addition to having a gym director and game-room director, clubs also needed an education director,” he said, adding that relationships with the School Department and the community at large are essential to his club.

In 2011, the Westfield club was licensed to provide daycare for 77 children. Concerned he was running out of space and anticipating increased demand, Parks led a $3 million fundraising campaign titled “Raise the Roof.”

“We literally took the roof off the gym, raised the gym up to the second floor, and built classrooms underneath for the licensed childcare program,” he said, adding that the club also expanded the education room and technology lab. Now, the facility is licensed to provide daycare services for 200 children.

When COVID-19 hit, the Boys & Girls Club of Greater Westfield was available for virtual learning for students, and in September, the club became a remote-learning site for the School Department. The city of Westfield provided every school-age child with a Chromebook tablet, and, with club staff making sure to keep age groups separated and properly distanced, students are linked into the school system for a full day of learning via their Chromebooks. Middle-school and younger kids make up most of the students in this program, which has proven to be a vital resource for families.

“Some of the students couldn’t link in from home, while others have parents who have to leave the house for work during school hours,” Parks said. “With no one at home to take care of them, they have the option to come here and not miss school.”

With all those young minds at work, the club has become a significant meal provider for children as well.

“Parents can drop off kids at 7:30 in the morning, and they will get breakfast, lunch, a snack, and a hot meal every day,” he explained. The club also provides meals at three public-housing sites, resulting in the staff serving nearly 600 meals a day. Like remote learning, Parks sees the meals program as essential to the organization.

“A working parent can pick up their kid at the club and know their homework is done and they’ve been fed,” he said. “It allows parents to interact more with their kids instead of rushing around to put a meal on the table.”

Right now, Parks has plans to expand the club and its services further with a 15,000-square-foot addition, which will allow the club to offer services to an additional 100 children.

The building plans originally called for an 11,000-square-foot expansion, but the pandemic forced engineers to increase the square footage per child and redraw the now-larger plans. The addition is scheduled to be completed by August with a September opening, in time for the new school year.

For Parks, the new structures are exciting, but the real payoff is the impact the programs have on people’s lives. “One of the things I’m most proud of is that people in the community say, ‘let’s call the Boys & Girls Club because they can probably help us or help these kids.’”

Thinking back to the time he got some needed help, Parks said he learned, years after graduating from college, that the banker who approved his student loan was on the board of directors for the Marlborough club. Likewise, he credits his current board of directors as the “guiding force” that supports all the Westfield club’s efforts, and points with pride to the cross-section of community members who make up the board.

“It’s not always easy to encourage people to be on your board,” he said. “We’ve been fortunate that people have reached out to us with an interest in joining ours.”

They are people, he added, who are willing to step up and help a kid in the community, and who recognize the value of paying it forward. His future was changed when he was able to go to college, and he’s dedicated his career to changing lives and finding ways to truly make a difference.