Pickleball Continues to Grow in Popularity Across the Region, Nation 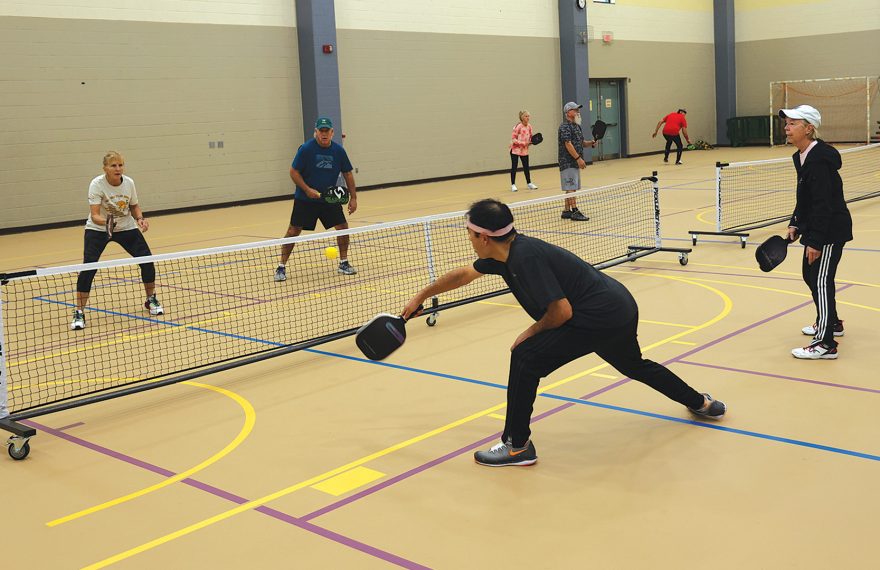 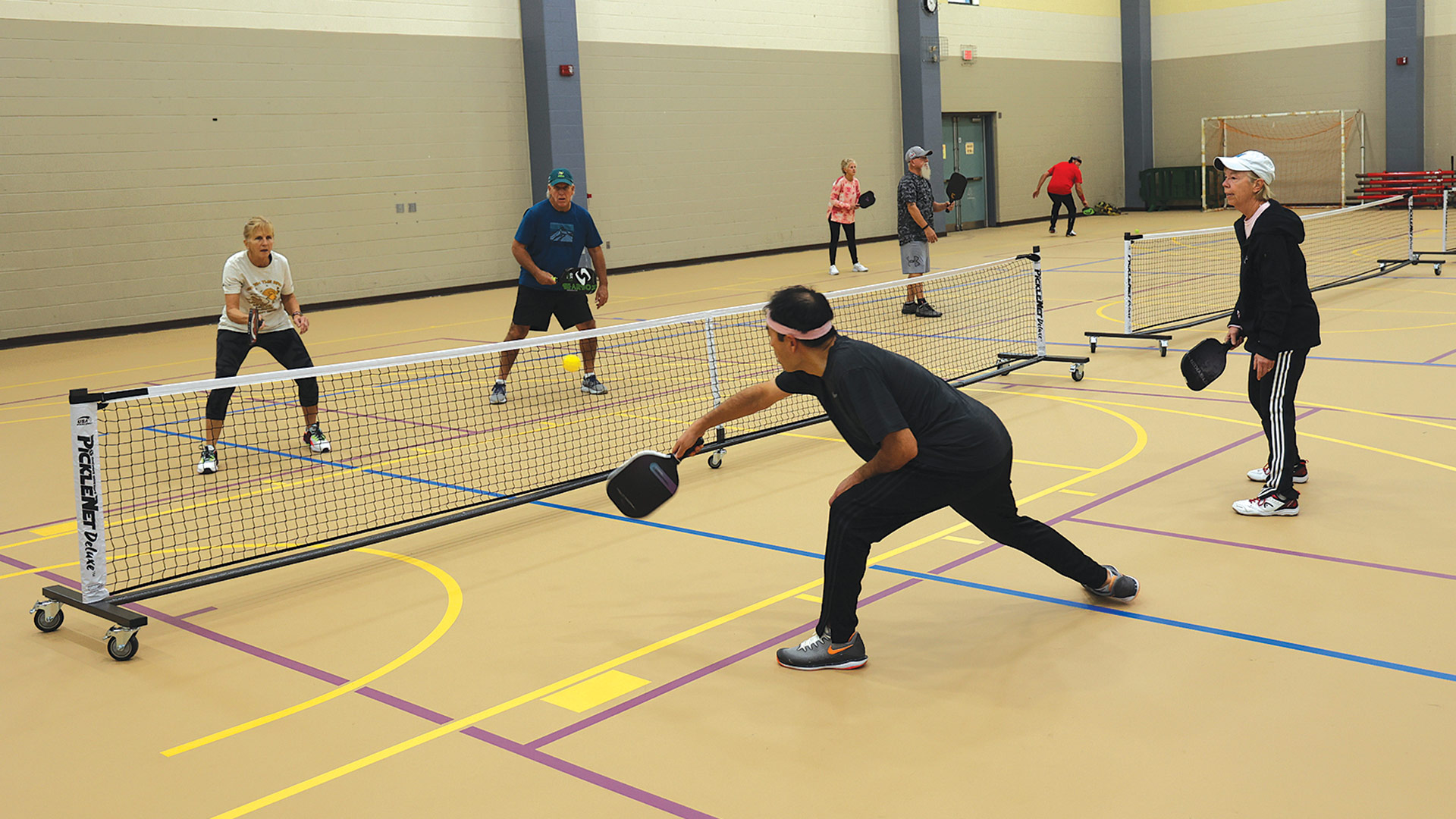 The new indoor pickleball courts at HCC’s Bartley Center have seen plenty of use.

Christina Royal was once a competitive amateur tennis player. But not long after taking the job of Holyoke Community College (HCC) president back in 2017, she discovered a new outlet for those skills — and a new passion.

It was pickleball, which she tried at the suggestion of former HCC trustee Julie Pokela. At the time, Royal was looking for a way to get some exercise and relieve some stress from her busy new job. She found pickleball to be the perfect outlet — and a lot easier on her knees than tennis.

“I love competitive sports, and I’ve played them all my life, so to be able to get back into that was really thrilling,” she said. “When I’m interested in something, I go full immersion, so I got my own equipment and started playing regularly.”

Three years ago, Royal was playing in a pickleball league in Easthampton and invited Tom Stewart, director of HCC’s Bartley Center for Athletics & Recreation, to watch.

“She said, ‘I’d love to get pickleball courts at HCC,’” Stewart said. “The floor was scheduled to be redone anyway. I said, ‘when we redo the floor, we’ll put them in.’”

Indeed, when the floor in the Bartley Center gym was redone over this past summer, inserts for existing indoor tennis nets were removed, and inserts for pickleball nets were installed, along with permanent pickleball court lines.

“People are into it big time. Players range from novices to advanced, so it’s not like it’s just advanced folks taking over. All abilities come in and play, and they gravitate to each other based on ability level.”

Now, for a $5 per visit fee, any member of the general public can come to HCC to play what has been touted as the fastest-growing sport in America.

“We’re offering the courts and all the equipment — nets, balls, and paddles,” Royal said. “We have everything here you need to play, and it’s all new.”

The seven pickleball courts at the Bartley Center are available weekdays from 7 a.m. to 1 p.m. Courts cannot be reserved in advance, but instead are assigned on a first-come, first-served basis. There is no pickleball fee for HCC students and Bartley Center members, while others are charged $5.

“It’s going quite well; we’re getting anywhere from 35 to 40 players a day,” Stewart told BusinessWest. “We get a lot of positive responses; people are glad we did it and wish it was open even more to them.

“If you need a paddle and ball, we provide that, but most folks bring their own,” he added. “People are into it big time. Players range from novices to advanced, so it’s not like it’s just advanced folks taking over. All abilities come in and play, and they gravitate to each other based on ability level.”

Andrew Rogers sees that same phenomenon on the four new pickleball courts the town of South Hadley installed over the summer at Buttery Brook Park. 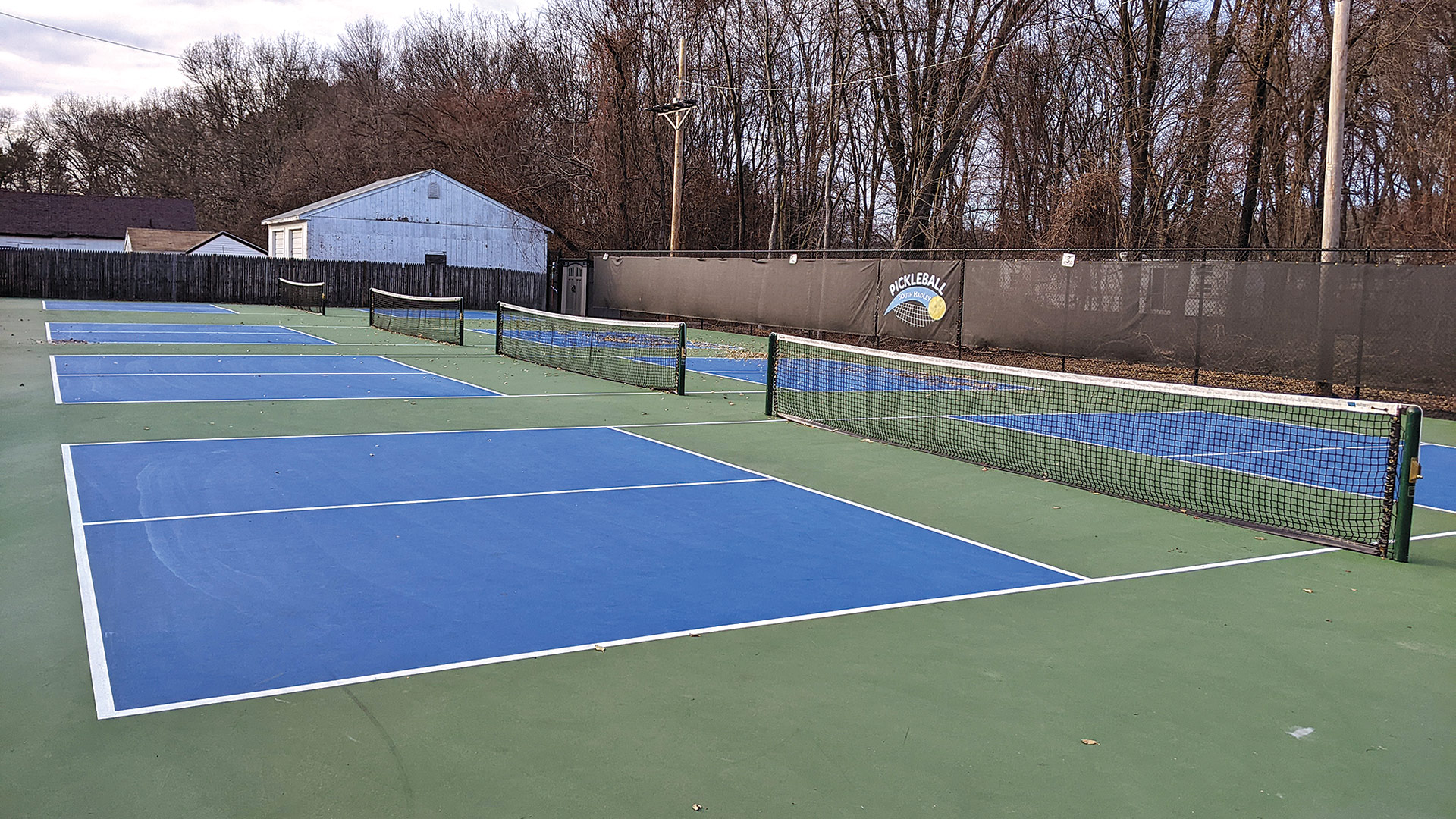 While cold weather has put a damper on things, South Hadley’s new pickleball courts have been wildly popular since opening in August.

“We have open-play nights on Tuesdays and Thursdays and play mixed doubles; everyone swaps around the court,” said Rogers, the town’s Recreation director. “We have a 10-year-old boy who plays, and a friendly couple in their 70s. Everyone plays together, and people are supportive of each other. It continues to blossom and grow.”

Pickleball had been on the town’s radar for five years and went through several budget cycles before it was approved, along with some fundraising and assistance from the DPW and Parks Department, among others. Alongside the courts are a picnic area where players can stretch and wait for a game, and the South Hadley Electric Light Department donated labor for lighting and electrical work.

The courts opened for play on Aug. 1, and about 100 people showed up for games and a learn-to-play clinic. While winter weather has put a seasonal damper on things, during the warmer months, it wasn’t uncommon to see the courts packed well into the evening, as they are in other communities that have installed similar facilities, like Westfield, Agawam, Belchertown, Easthampton, Southampton, and more.

“One family has three kids under 13, and they’re there all the time, mixing in with people a couple generations older.”

“People mingle and jump between towns and meet new people,” Stewart said, adding that a group in South Hadley promotes games through an app called TeamReach. “They can say, ‘hey, I’m showing up to play, anyone want to come?’ I know over 330 people on that app, which speaks to its popularity. In fact, it’s the fastest-growing sport in the country, and it’s starting to get even more popularity. You can find it all over TV. It’s definitely something anyone can play, all ages mixing together, male, female … it’s really wonderful.”

How do You Play?

According to Wikipedia, the appearance of a pickleball court, and the manner of play, resemble tennis, but the court is the size of a doubles badminton court, less than a third the size of a tennis court. Court lines include two seven-foot areas on either side of the net known as the non-volley zones (or, colloquially, the ‘kitchen’), where the ball cannot be hit with the paddle unless the ball bounces first. Only the serving team can score a point, and continues serving until they fault. All serves are made with an underhand stroke.

The hard polymer ball used in pickleball produces significantly less bounce than softer flexible balls, such as a tennis ball. To minimize any advantage the serving or receiving side might have at the beginning of the game, the ball must bounce once on each side of the net before either team may ‘volley’ the ball, or hit it in the air before it bounces. 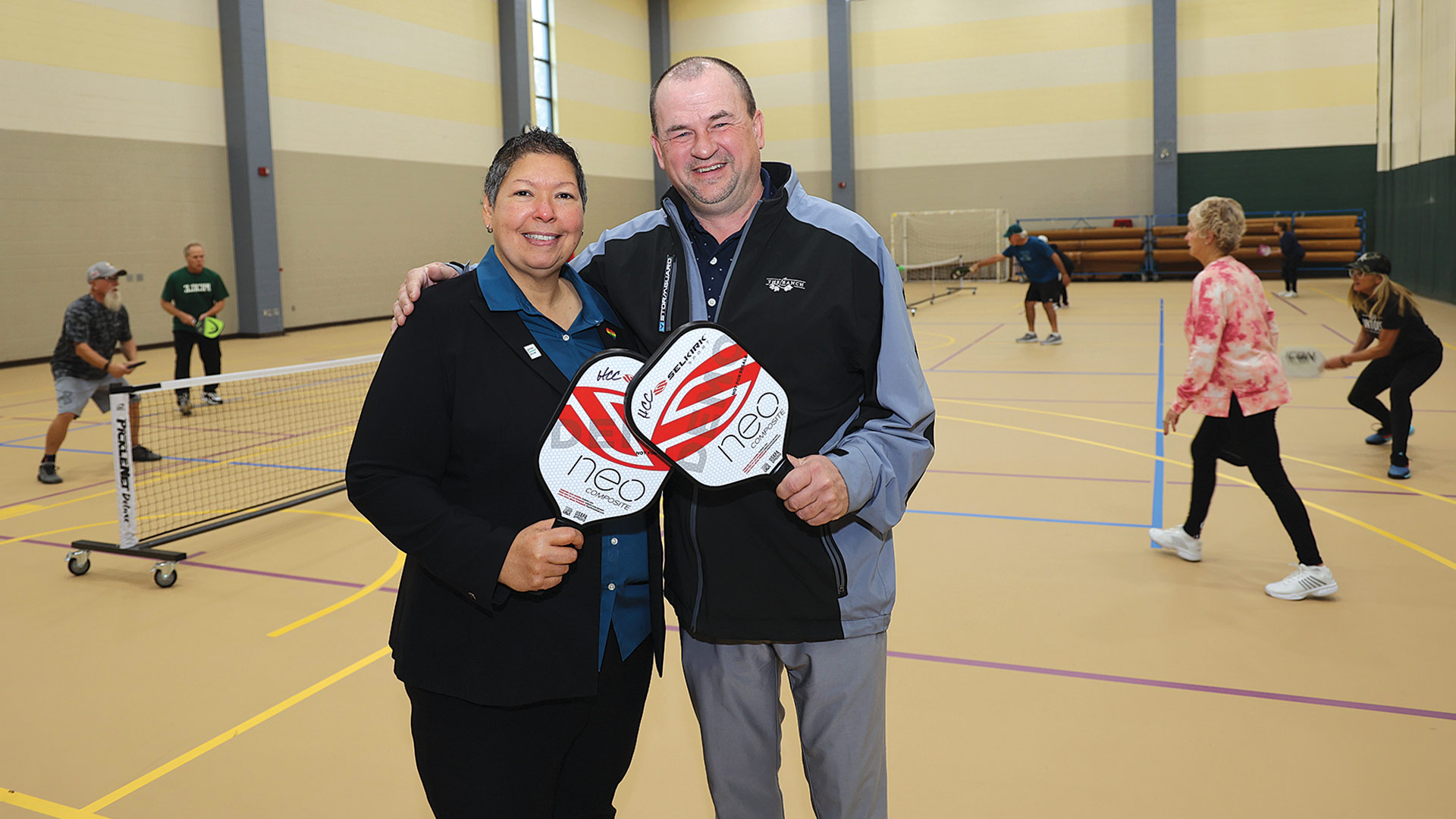 HCC’s Christina Royal and Tom Stewart check out the action in the Bartley Center.

It’s not actually a new sport, but has been around since 1965, for most of those years steadily gaining popularity in the Pacific Northwest, then elsewhere. In 2021 and 2022, pickleball was named the fastest-growing sport in the U.S. by the Sports and Fitness Industry Assoc., with more than 4.8 million players. A growing interest in the sport is attributed to several factors, including a short learning curve, appeal to a wide range of demographics, and low startup costs.

“It’s beyond what we expected. We knew it was going to be popular, but had no idea how popular,” said Rogers, adding that there has been discussion of further fundraising to expand the courts.

While pickleball has been compared to tennis without as much running — one of the reasons it’s so attractive to people of all ages and fitness levels — Stewart has often described it to people as a giant ping-pong table. But he’s also adept at explaining the connection to tennis, and how it’s subtly different.

“Tennis players are used to the racket doing the work, because the string so stuff, but with pickleball, you do more work with the paddle; it’s not wound as tight. But they pick it up fairly quickly.”

Players often attack lob shots on the fly — as noted earlier, the serve and the return both have to bounce, but after that, lobs are fine, just not in the kitchen — making it a game of hand-eye coordination, he added. “You’re not going to get the groundstroke game you get with tennis. Advanced players may groundstroke for a while, but mostly what I see is serve and volley.”

Royal said the courts have created more access to, and interest in, the Bartley Center. “We already have a lot of people that utilize the facilities for basketball or for working out in our fitness room. Here’s another way we can open up our campus to the community.”

Stewart, who serves on the board of regents for the National Junior College Athletic Assoc., noted that tennis is a dying sport at the junior-college level. “There are no junior colleges in New England that have tennis anymore. Tennis used to be so popular, you couldn’t get on a court. Now people are having a harder time getting courts for pickleball, particularly indoors.”

If You Build It, They Will Come

“In addition to my own passion for the sport, there’s a real opportunity here from an economic-development perspective for our region to draw more visitors to the area for pickleball,” Royal said. “That creates all sorts of business opportunities.”

When the Bartley Center went up at HCC 22 years ago, Stewart recalled, then-President David Bartley told him, “make sure this place is open and being used.” That mission has been accomplished, he added. “We’ve been pretty successful for 22 years, and this just adds to it.”

Municipalities like South Hadley are having the same experience.

“We had the lights on until 10 during Daylight Savings,” Rogers told BusinessWest. “We still have people out there if it’s above 32 degrees and the balls aren’t cracking. One family has three kids under 13, and they’re there all the time, mixing in with people a couple generations older. You can play for a long time because it’s not that taxing. It’s great exercise, but it’s not running you ragged, so you can come back and do it again tomorrow.”