At Hadley Printing, the Presses Have Started Rolling Again 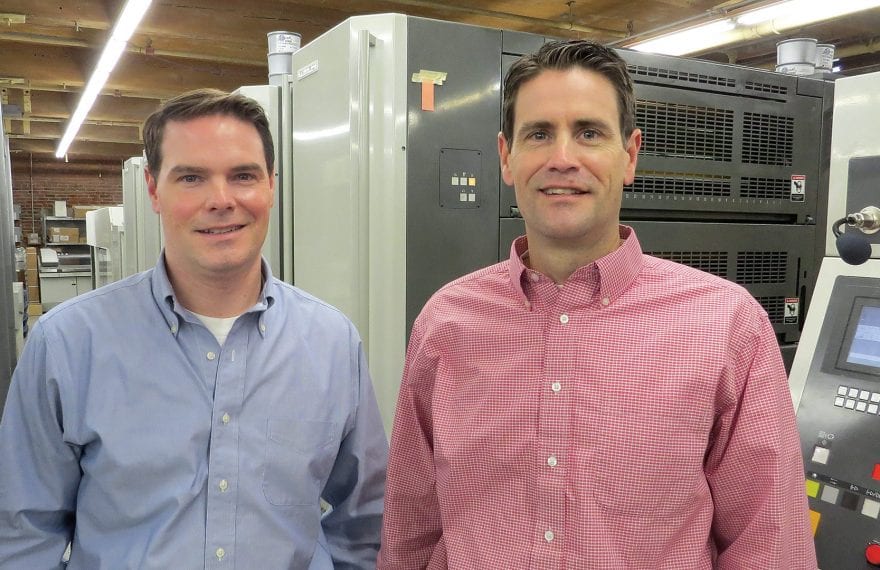 Chris (left) and Greg Derosiers say Hadley Printing is back to something approximating normal, and employees have actually logged some overtime.

Chris Derosiers was searching for a way to describe what things were like last spring, at the height of what’s now being called the first COVID-19 surge.

And he found an analogy that probably works for just about every small-business owner in this region.

“It’s like being on the highway … you’re going to 65, 70 miles an hour and cruising along nicely, but with three-quarters of your trip still in front of you,” he said, effectively summing up how things were going during Q1 at Hadley Printing, the family-owned venture he serves as president. “And then … it’s like hitting a wall of traffic, and you don’t know how long that wall of traffic is. And six or seven months later, we’re just finally getting to the other side of that traffic jam.”

By that, he meant the company has been experiencing gradual improvement over the past several months, and is approaching something approximating normal: business that is off perhaps 10% from last year. Recently, and for the first time since the pandemic started, the workflow was such that team members were actually able to earn some overtime, a much-celebrated milestone because of what they believe it indicates.

What isn’t known is whether the company will hit another wall of traffic, or when, said Chris’s brother, Greg, the company’s vice president, adding quickly that this puts Hadley Printing in the same position as just about every company during the pandemic — an unsettling place, to be sure.

“What we don’t know is whether this ‘back to normal’ will stay that way, or whether there will be another cycle where people pull back a little bit,” he told BusinessWest, adding that the best this company, or any company, can do is find ways to cope and persevere until times improve.

Flashing back to mid-March, a painful exercise for most every business owner in the region, the brothers Derosiers recounted how their venture hit that proverbial traffic jam.

“When this thing broke back in March, we were doing just great; everything was rocking and rolling, and we had a ton of work in here,” said Greg, adding that things changed abruptly and profoundly. “Every time we picked up the phone or answered an e-mail in the second half of March, it was ‘cancel this,’ or ‘please put this on hold.’ Literally, everything was just getting stopped in its tracks.”

Elaborating, the two said that print jobs of all kinds and sizes were being shelved, and for various reasons. Cost was one of them, obviously, but in the case of the 2020-21 schedule for the Springfield Symphony Orchestra, for example, it was a case of need — or lack thereof. Organizers had no idea when they could next stage live concerts, so there was no need for a schedule. And in the case of annual appeals launched by colleges and nonprofits (and there are traditionally many of those throughout the year), those leading area institutions decided the peak of a pandemic was certainly not the time to be waging such a campaign.

“Every time we picked up the phone or answered an e-mail in the second half of March, it was ‘cancel this,’ or ‘please put this on hold.’ Literally, everything was just getting stopped in its tracks.”

Add it all up, and the phone kept ringing, and each time it did, the person at the other end was canceling an order.

“And Chris and I looked at each other and went, ‘whoa.’ We didn’t know whether to look left or right; we didn’t know what was going on,” he went on, adding that, by late April, relief, in the form of PPP and other measures, had been rolled out with the intention of helping companies like Hadley — and the businesses that form their customer base — through what was projected to be eight to 10 weeks of very rough water.

“We all know now that it wasn’t an eight- to 10-week problem,” Greg continued, adding that one of the biggest challenges for this company was not knowing if printing would be deemed essential — status that was eventually earned.

“The few orders we did get were communication and mailing pieces focused on how to deal with COVID,” including man from hospitals and other healthcare providers, he went on. “Chris actually sent a letter to Governor Baker explaining why printing wasn’t an essential business.”

From the start, the priorities, the two said, were to be conservative with spending and watch every dime, and do everything they could to hang onto to talented, hard-to-replace printing professionals.

“The difficulty that we have in the manufacturing world is that we have some pretty highly trained people who are very good at what they do,” Greg explained. “Finding these people is very difficult, so we don’t want to let our workforce go. And so, for us, the last resort was to lay people off or furlough them; we hung on for as long as we could before we made any decisions like that.”

Fortunately, the company has historically been conservative fiscally, he went on, and had the ability to put money aside and weather a storm of this consequence, although it certainly hasn’t been easy.

“That part has been a blessing, but we need to make that back up,” he went on, adding that the company, which turned some type of corner in September, believes its improved situation is part of a broader pattern within the business community — and society in general — to find ways to cope with the pandemic and not merely cancel or put things off, as was happening in the second and third quarters.

As for 2021, Greg said no one really knows what to expect. He does believe that, because of what businesses went through in 2020, and because they don’t know when ‘normal’ will return, many will remain conservative in their approach — right down to print jobs.

“It’s like walking on a sidewalk on an icy day,” he explained. “You’re going to be careful where you walk and what you do, as opposed to proceeding as usual. I think 2021 will be that way — like walking on ice.”