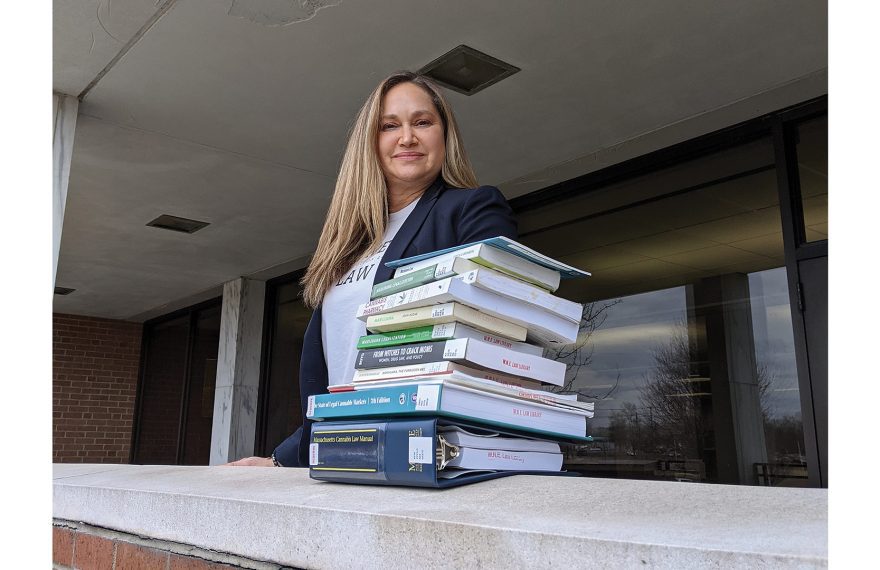 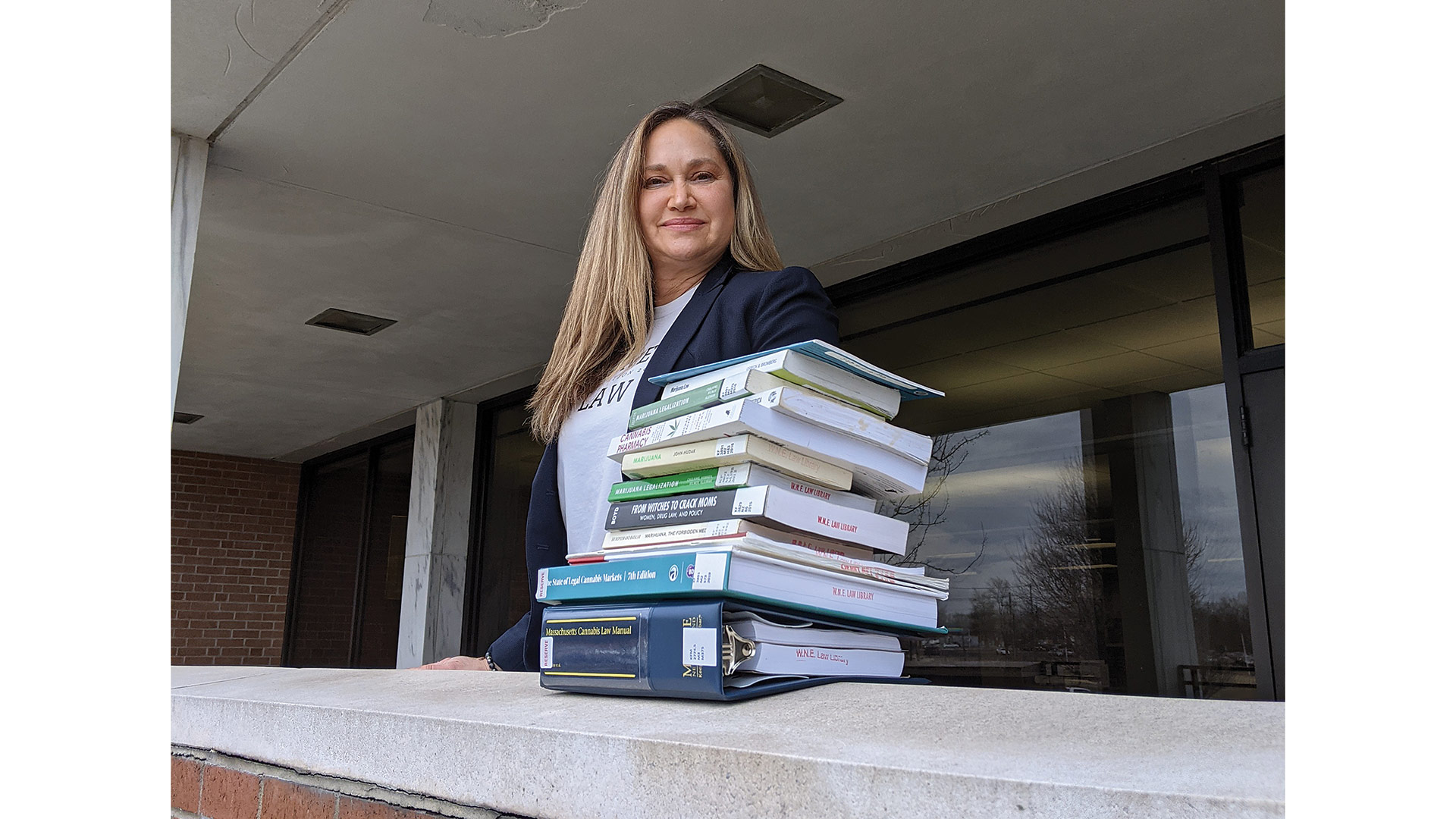 As a law professor, Julie Steiner saw the thorny issues raised by cannabis legalization in Massachusetts — and the way it conflicted with federal law — very early in the process and turned it into a passion of sorts, not only educating students at Western New England University School of Law, but bringing other educational resources to the region and becoming a go-to resource on the topic of cannabis law. Yet, it’s not just legal nuts and bolts she’s interested in, but the real people impacted by a drug-regulation history in the U.S. that’s problematic at best — and still evolving.

Julie Steiner has been interested in the connections — and, often, the contradictions — between the fields of law and cannabis for a long time.

And when momentum was building in Massachusetts to legalize adult-use cannabis, just a few years after medical marijuana was given the green light, she really started thinking about the implications.

“Lawyers raise their hand and swear to uphold the law of the United States,” said Steiner, professor of Law at Western New England University (WNE) School of Law. “But cannabis is federally illegal, even though it’s technically legal in Massachusetts. How are lawyers to navigate this whole murky system?”

Based on informal conversations with her colleagues, plenty of law professionals were fascinated by this topic — and unsure how the practice of law could deal with the emerging business of cannabis.

“Cannabis is federally illegal, even though it’s technically legal in Massachusetts. How are lawyers to navigate this whole murky system?”

“It was getting off the ground in Colorado and Washington recreationally, so we had those two states to look at,” Steiner told BusinessWest. “But there was a dearth of scholarship. It was such an interesting time, really. Back then, support for legalization wasn’t as strong as it is now. In law, there was concern about clients and lawyers being prosecuted under RICO statutes.

“I called it the Wild West,” she went on. “The state bar association in Colorado had taken the stance that you can advise on the law, but since it’s federally illegal, if you actually started advising clients through the process of licensure, you risked bar sanction. That ultimately went away because courts reversed the bar stance on that, but it was a risky time. It was really, really interesting.”

That’s one reason why she applauds her university and its administration for being forward-thinking in establishing curriculum around this rapidly evolving topic, specifically a course called Cannabis Law and Policy. She proposed the course in 2015 and, after a year of legwork, and study, started teaching it in 2016, just a couple months before voters made adult-use cannabis legal in Massachusetts — but long before businesses actually started to open.

“Our primary mission was, and still is, lawyer competency,” Steiner explained. “I try to touch upon every facet that I can of the industry, teaching aspiring lawyers but also the practicing bar about how to counsel clients.

“I call the most risky the ‘plant touchers’ — cultivators, manufacturers, and retailers. They’re the most highly regulated and most vulnerable to prosecution if they do anything wrong,” she went on. “That requires a lot of competence, legal advice, knowledge about regulatory regimes, and ability to keep abreast of the ever-changing landscape.” 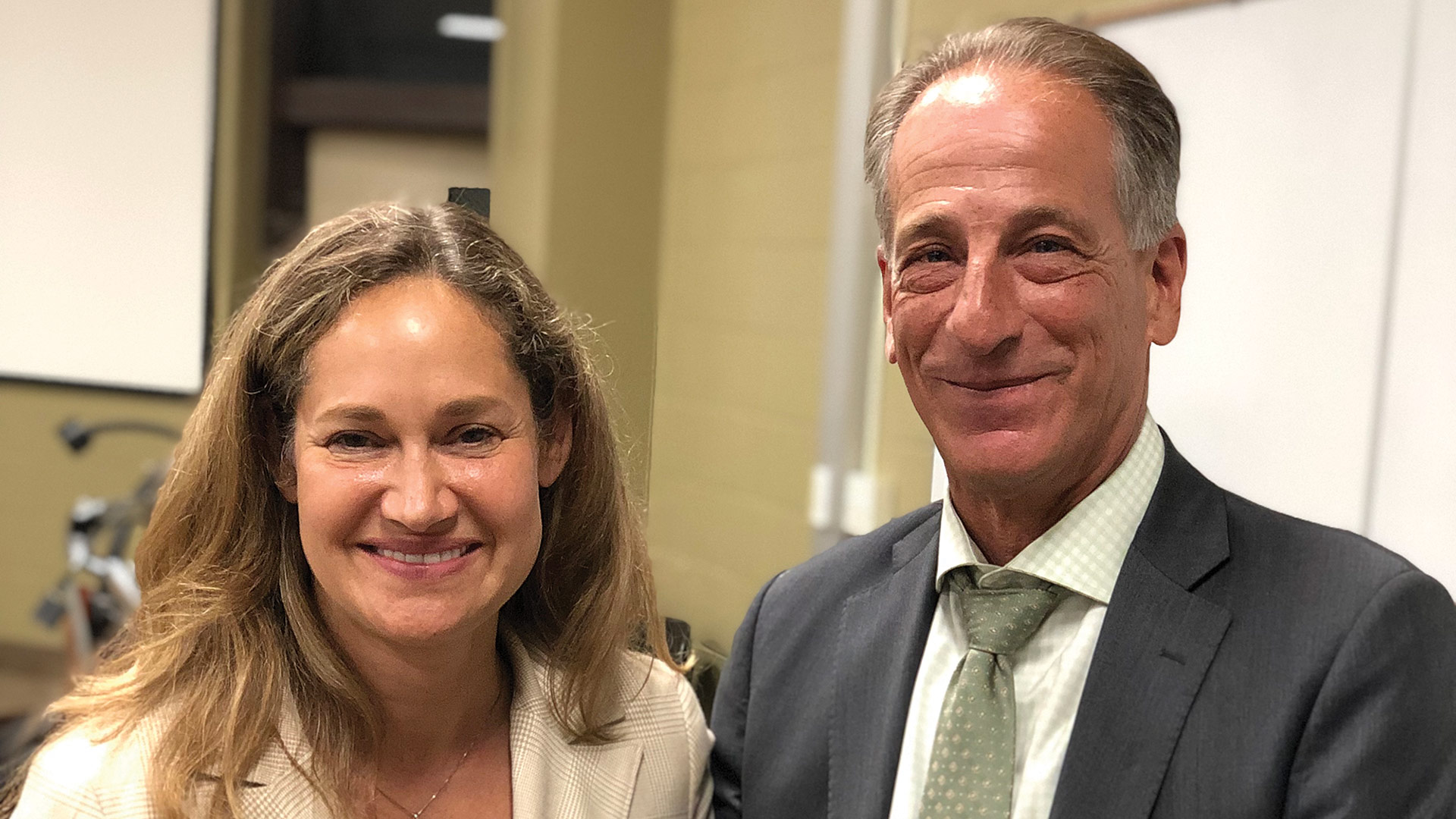 Julie Steiner welcomes Cannabis Control Commissioner Steven Hoffman as a guest lecturer in one of her Cannabis Law and Policy classes.

And changing it is, she emphasized. “I find I can’t rely on anything I said last month without updating it.”

Beyond the plant touchers, plenty of other types of businesses have been involved in the world of cannabis, from lightbulb suppliers for growers to drivers who transport money; from property landlords to IT and security firms. And the list goes on.

Sensing that this new industry would need legal guidance, Steiner not only created the course, but was involved in bringing Cannabis Control Commission (CCC) regulatory public hearings to the law school starting in 2018. The following year, the city of Springfield retained her to serve as a consultant to develop a process to solicit and select marijuana shops.

And she’s become a sought-after resource on cannabis law, having been been interviewed by regional and national media; published scholarly articles in many legal journals; advised educational institutions on the topic of drug policy; and lectured on the topic in WNE’s Mini Law School and Road Show programs.

It’s a field, she notes, that has already crept into numerous law niches, from banking and finance to taxation; from real estate to employment law; from intellectual-property law to prosecution and defense, just to name a few. “Cannabis law touches on all of it. It’s a serious and evolving subject field in the law.”

The Cannabis Law and Policy course, WNE’s website explains, “focuses on how society has historically, and is currently, regulating cannabis,” also touching on legal, professional, and business ethics; enforcement policy; and much more.

Prohibition, Steiner noted, began at the state level early in the 20th century and eventually crept into the federal code. Over the past decade or so, individual states have again led the change to decriminalization, then legalization, but federal law has not followed suit … yet.

As a result, if it wanted to, the U.S. government technically could enforce the federal Controlled Substances Act, which pre-empts all the conflicting state laws, she explained.

“I call the most risky the ‘plant touchers’ — cultivators, manufacturers, and retailers. They’re the most highly regulated and most vulnerable to prosecution if they do anything wrong.”

“Now, they can’t force states to enforce federal laws. The real conflict happens when participants, pursuant to those state regimes, start touching the plant. Once you get there, you have a conflict with the Controlled Substances Act. You have cultivation, which is prohibited. That’s where the federal government could technically come in and enforce. But that’s not happening because the federal government is exercising enforcement restraint.”

Changing public opinion is a factor as well, she noted. “When I started teaching this, public support was hovering just above 50% in the Gallup poll. Support is now about 68%. There’s much stronger public opinion for legalization than there was back then.”

“We have a robust dialogue about this. It’s very eye-opening to students,” she said, noting that drug laws regarding cannabis possession in the U.S. have historically had a fourfold disproportionate impact on people of color and those of lower socioeconomic means.

“Then we start thinking about what it means to be a lawyer representing the cannabis business. We talk about what that business looks like,” she went on, noting that she previously used Colorado and Washington as templates, but now draws on Massachusetts, since the cannabis industry has taken such deep roots here.

She also talks about banking challenges and Section 280E of the federal tax code, which requires even illegal enterprises to pay taxes. These tend to be more onerous for cannabis businesses, which can deduct the cost of goods, but not payroll.

“They get hammered. So lawyers work to structure these plant-touching businesses to maximize the taxation system, often creating two separate companies.” 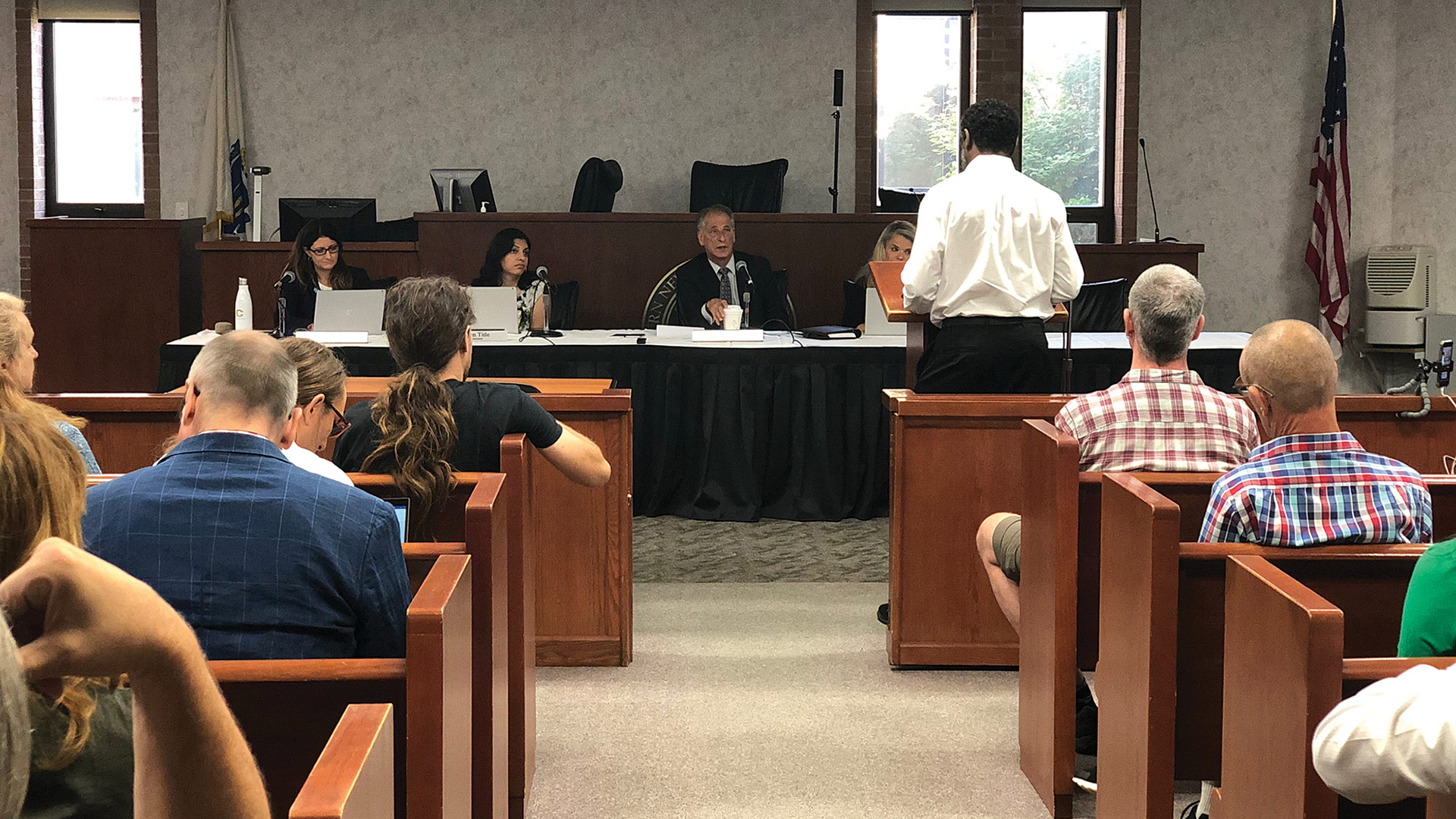 The Cannabis Control Commission has often used the WNE Law School as an outpost for holding public hearings and listening sessions, like this one, attended by (from left) then-commissioners Britte McBride, Shaleen Title, Chairman Steven Hoffman, and Kay Doyle.

Steiner will bring in guest speakers from different areas of the law, including CCC members, to provide real-world perspectives, and students are also required to write and present their own independent scholarly papers on cannabis-law topics.

Speaking of the CCC, the law school’s seminars with commissioners and other experts in various areas of the law proved to be a valuable resource for locals, including potential business owners, who wanted information on topics ranging from licensing to operational requirements to municipal controls, without having to go to Boston.

“We thought early on we had the ability to align with the Cannabis Control Commission to help educate the practicing bar across the state,” she noted. “Lawyers, consultants, and people who wanted to be stakeholders would show up, and we’d talk about regulations and what businesses looked like. When they amended the regulations, we educated people again. We were, pre-COVID, the physical presence in Western Mass. for the Cannabis Control Commission.”

Cannabis law is a passion project for Steiner, who also teaches Environmental and Land Use Law, Torts, and Introduction to Law.

“I’ve been involved in the history of how it has gone from its infancy through decriminalization through medical legalization, watching the birth of the adult, recreational-use industry, and now we have a viable and developed phenomenon. We have to keep pace with this, and that’s a fun challenge, educating lawyers and would-be lawyers. It’s truly a mission of mine in life.”

She prides herself on teaching law students how to be not only competent, but ethical practitioners in the field, who can counsel clients who often have plenty of misimpressions about legalization and what that means, since state and federal laws are currently so far apart.

As for federal legalization, “I welcome it because it’s sensible policy,” Steiner said. “We simply shouldn’t have a robust, viable workforce and an industry that is a real economic player that is forced to confront all-cash situations, which is dangerous and poor policy for everyone involved.”

Her public talks have addressed colleges grappling with the issue of legal medical marijuana, employers wondering if they can drug test for something that’s now legal in Massachusetts, and other audiences, ranging from public-health professionals to drug task forces, and even legislators. “Early on, policy influencers needed to think through policy changes. We tried to be on the cutting edge, helping them think through that lens.”

But even that effort is problematic, she wrote in a scholarly article last summer.

Because of the need to balance relief for the convicted with the need to maintain an historical account of the cannabis enforcement era, she suggests expunging entities maintain a record — one that eliminates sensitive, personally identifying information, while maintaining other important information of historic and legal value.

And that expungement process needs to continue, she told BusinessWest.

“We’ve gotten involved in helping those with prior drug convictions clear their records. This helps mitigate the profound effect of the War on Drugs, which we now understand overly penalized people given the severity of what was going on. And that criminal conviction follows them for life, with all those collateral consequences,” she added, making it harder for convicted drug users to access a job or housing. “It’s hampering people in their ability to move forward in life. We’re part of that social-justice movement to mitigate the effects of the War on Drugs.”

Again, cannabis law — and how it impacts not only future lawyers, but users as well, past and present — is one of Steiner’s passions, and it’s a satisfying challenge to stay atop the latest developments.

“We have a body of law now. When I jumped in, there was hardly any case law,” she said. “Learning about it, compiling it, and providing it to students is something I continually do.”