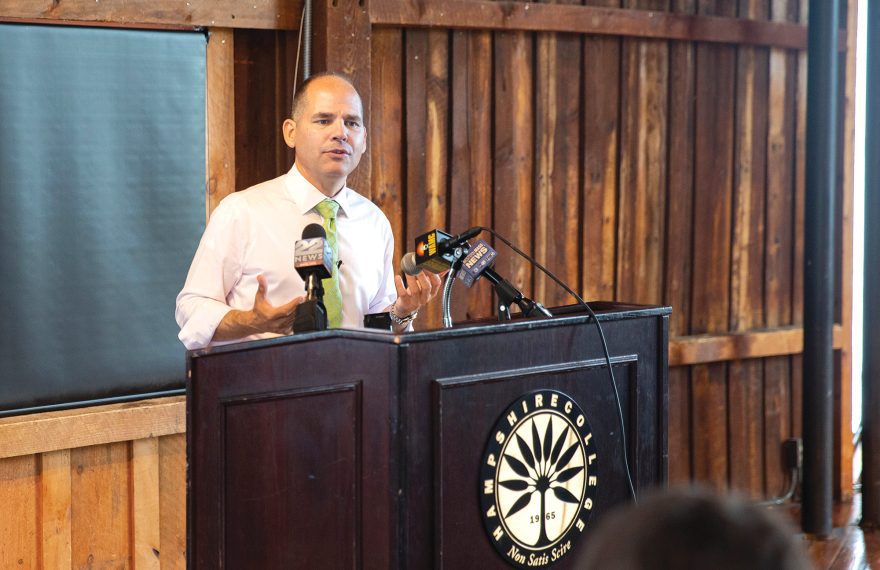 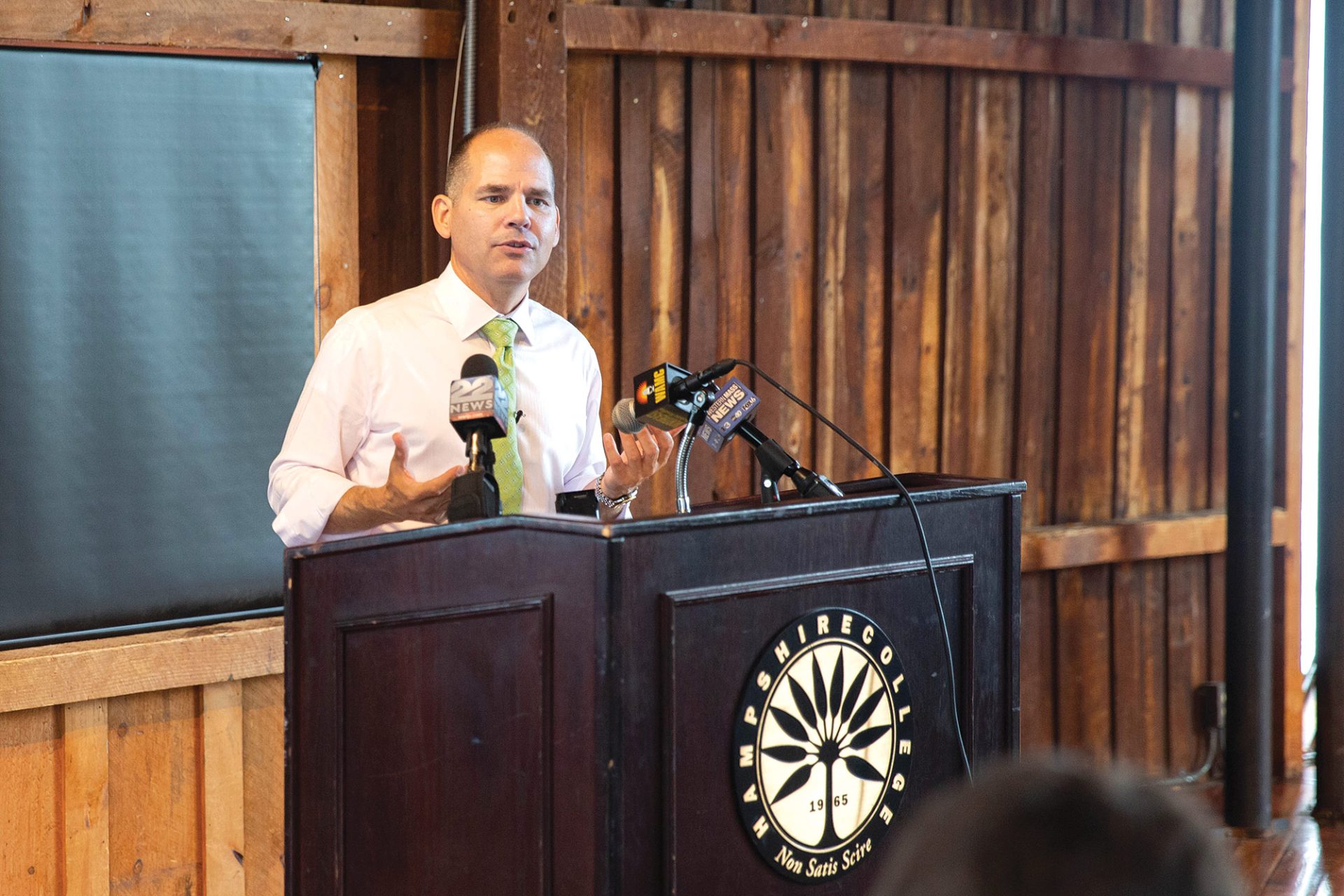 Ed Wingenbach says Hampshire College is identifying the urgent challenges of the 21st century and making them the emphasis of the curriculum.

If you were designing a college education today, what would it look like?

That’s the question Edward Wingenbach, president of Hampshire College, discussed with faculty, staff, and students in 2019. Back then, the college was facing financial struggles and even explored the possibility of merging with another institution.

At that time, the college unveiled Change in the Making, a fundraising effort launched with help from documentary filmmaker and Hampshire College alum Ken Burns. While the goal of the five-year campaign is to raise $60 million to directly fund the operations of the college, it also presented an opportunity to reinvent the definition of a liberal-arts education.

Wingenbach said the approach starts with identifying the urgent challenges of the 21st century and making them the emphasis of the curriculum.

“We have adopted four specific challenges that our faculty will incorporate into many of the courses they teach,” he said. For academic year 2022-23, the questions are: how should we act on our responsibilities in the face of a changing climate? How do we disrupt and dismantle white supremacy? How do we decide what constitutes truth in a ‘post-truth’ era? And how can art and creative practices heal trauma?

Jennifer Chrisler, chief Advancement officer for Hampshire College, said the questions were compiled with input from faculty, students, and staff. “It is a way of organizing the college around the kinds of questions the world is facing and that young people really want to tackle,” she explained.

The questions will be reviewed every year to see if new ones need to be added or dropped, Chrisler went on. “It’s a chance for students, faculty, and staff to weigh in on the way the curriculum is shaped on a regular basis. That usually doesn’t happen in higher education.” 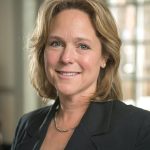 “It’s a chance for students, faculty, and staff to weigh in on the way the curriculum is shaped on a regular basis. That usually doesn’t happen in higher education.”

Recently, the campaign received $5 million from an anonymous doner to establish the Ken Burns Initiative to Transform Higher Education, an effort Wingenbach described as a subset of the overall Change in the Making campaign. The donor had no previous affiliation with Hampshire and didn’t know much about the college until Wingenbach and his staff began talks with them.

“The donor was excited about the work we are doing and wanted to help us accelerate it while, at the same time, honoring Ken Burns, who is someone the donor knows very well,” Wingenbach said.

Hampshire College has always sought to transform higher education. Wingenbach said the point of the Change in the Making campaign is to pursue that vision with renewed vigor.

“Most colleges will have students pick an academic track they will study for four years with the hope these courses will prepare them for careers and opportunities that probably didn’t exist when they started college,” he noted.

“By contrast, we’re saying no one knows what the challenges and opportunities are going to be five years from now, but they will require creative, entrepreneurial thinkers who can work across all kinds of fields of knowledge. Students from Hampshire College will have been practicing this approach in increasingly sophisticated ways.”

To illustrate how this works in a real-world setting, Wingenbach gave the example of the COVID-19 vaccine rollout. While the vaccine was an amazing accomplishment, it was also important to think about how to communicate with people to persuade them to change their behavior and get the shot. By putting so much emphasis on just the vaccine’s development, he contends that only half the problem was solved.

“The point is that problems get solved when the technical and social sciences work together,” he noted.

While this approach is new to incoming classes, Wingenbach reported that students are enthusiastic about it. Chrisler said donors feel the same.

“Donors are excited because our approach represents an incredibly needed change in higher education today,” she said.

Chrisler added that donors also support the college because, when students leave as alums, they often go on to do extraordinary things. While Burns is the most famous alum, Chrisler cited others, such as Manual Castro who was recently appointed to the Mayor’s Office of Immigrant Affairs by New York City mayor Eric Adams, the first time this position has been held by an undocumented person, or ‘Dreamer.’ Chrisler also cited Stephen Gardner, named in December as the next CEO of Amtrak.

“When he came to Hampshire, Stephen was interested in the infrastructure of railroads and music,” she said. “Now he will be able to shape what rail transportation looks like in our country.”

Burns has often credited his success to his experience at Hampshire. In a news release on the anonymous donation, he expressed humility for the gift made in his honor and supported the college’s current efforts.

“I know Hampshire is transformative because I experienced it firsthand,” the filmmaker said. “Fifty years later, our nation needs fresh thinking in higher education, and Hampshire is poised to deliver on that opportunity.”

The anonymous donation is the second substantial contribution since James and Paula Crown invested $5 million in the campaign in late 2020. Early indications show this innovative approach is helping build back enrollments.

“This year’s entering class was nearly 100% over last year,” Wingenbach said. “In addition, we have doubled the number of applications we had at this time last year.”

While admitting there is still much to be done, Wingenbach said enrollments are now comparable to 2016 and 2017, when the college had much larger classes.

Chrisler recalled the tough days of 2019 as a pivotal time that helped everyone realize the importance of Hampshire College as an institution both for what it has done and what it can do.

“The tough times crystalized for many people the need for Hampshire to remain an independent and thriving college for its students, for the Pioneer Valley, and for higher education overall,” Chrisler said.

These days, as the college continues to innovate and write its next chapter, she said these are exciting times. “Most of us here are deeply grateful to be a part of that story.”