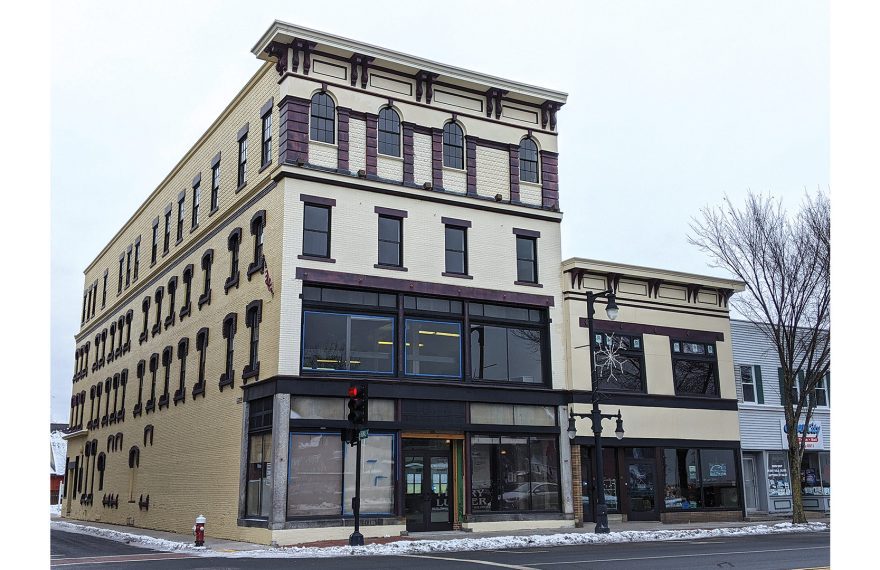 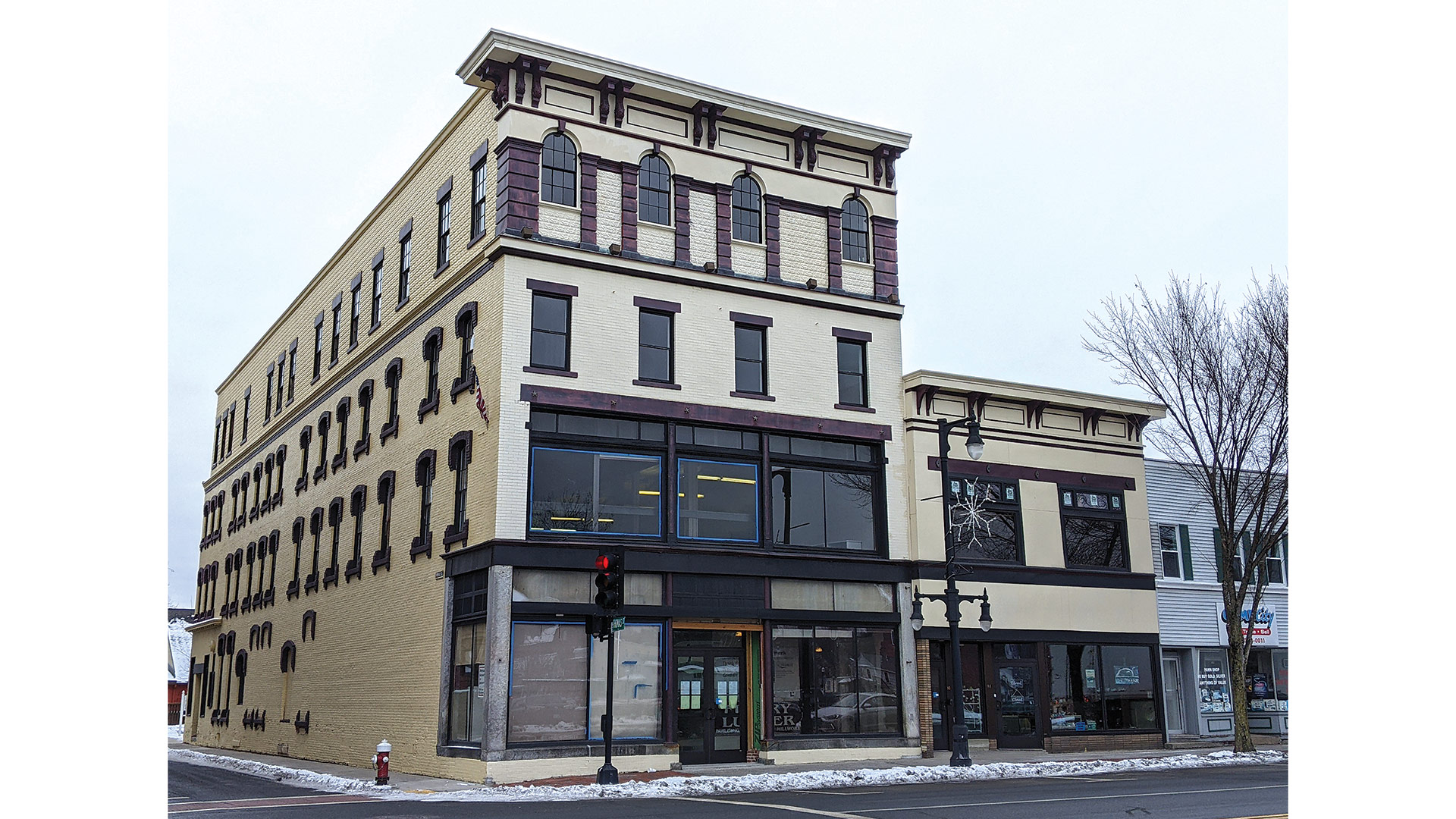 Gene Borowski has a keen sense of history.

So he was especially intrigued by an old hydraulic elevator in the former Lambson Furniture building in downtown Westfield, which was manufactured at Worcester Polytechnic Institute in the late 1800s and installed in the furniture business around 1896.

It was still operable, he said, but its cable shutoff system no longer meets modern building codes. So now, on the first floor of the building sits an array of 21st-century elevator parts, ready to be assembled — though Borowski still plans to use the original carriage in the new, modern shaft.

“It was one of the first hydraulic-powered elevators of its time,” said Phil Peake, one of Borowski’s co-investors on a project to rehabilitate the building. “And it actually worked.”

The development project known as Lambson Square includes both the four-story Lambson building at 89 Elm St. and the connected two-story building at 81-83 Elm St., which most recently housed Bentley Billiards, as well as a 15-space parking area in the rear.

“It’s quite a project. The goal is to take this business and turn it into some kind of resource for the town.”

Borowski bought the building in 2019 for $275,000, and has accessed $350,000 in Community Preservation Act (CPA) funds to painstakingly restore — as in brick by brick — the building’s Italianite exterior. Another award of $585,000 targeting underutilized properties in the downtown district will finish bringing the building up to code, including restrooms, handicapped access, and more.

“It’s quite a project,” said Peake, who is also a psychology professor at Smith College. “The goal is to take this business and turn it into some kind of resource for the town.”

Borowski plans to use the first floor of both buildings for restaurants, bars, and music and entertainment space. Among the items he’s secured are a chandelier from the old Union Station in Northampton and all the kitchen and furniture from the Sierra Grill restaurant in Northampton, which closed a few years ago. He also plans to turn a small roof off the second floor of 81-83 Elm into a courtyard and perhaps café space.

The second floor of 89 Elm will house small businesses and vendors and perhaps co-working space, while the third and fourth floors will feature a mix of residential units: two-bedroom, one-bedroom, and studio. Tenants will enjoy touches like the original, restored window trim and the original glass panes, all given a modern insulation seal — just one example of how “we’re trying to take this old building and bring it into this century,” Peake said. 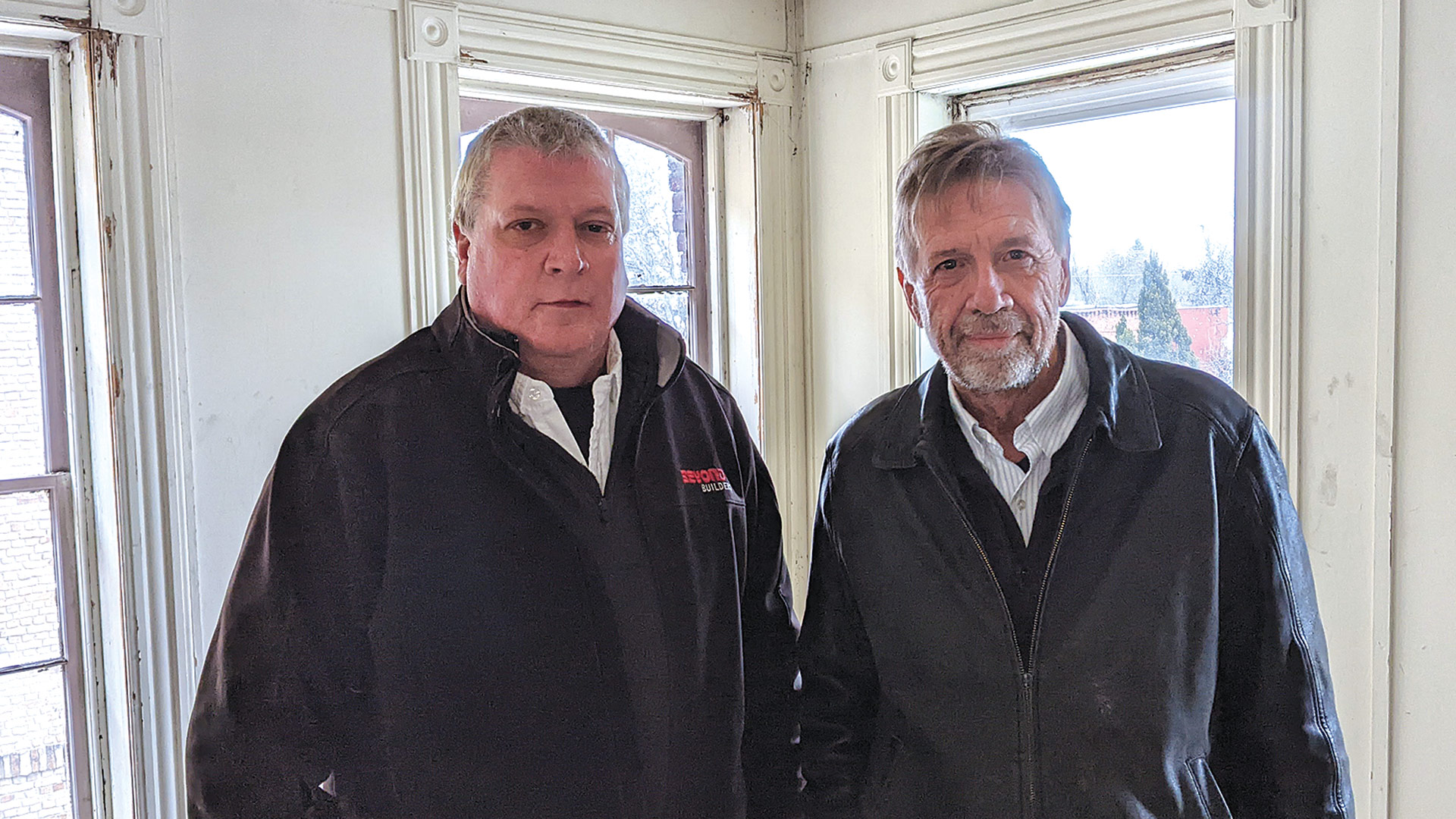 Gene Borowski (left) and Phil Peake stand in one of the future living units in the Lambson building.

Borowski wants to rent the residential units for less than a typical rent in the district, as low as $900 a month, compared to a nearby building that was renting for $1,600 recently. The idea is to make the property as attractive as possible to residents, businesses, and hospitality entities alike as part of a revitalization of that stretch of Elm Street, across from the Olver Transit Pavilion and a plot of land the city plans to turn into an outdoor performance space.

“It is the intention of Lambson Square Properties to develop the shell of a building that was formerly the Lambson Furniture building into a vibrant, multi-use hub in a manner that we believe will catalyze the entire Elm Street business district,” Borowski and his partners wrote in their initial funding request from the city’s Community Preservation Commission.

“At present, there is limited foot traffic at Elm and Thomas streets in part due to the lack of compelling retail (and housing) options in the area,” they went on. “We believe the development Lambson Square will inspire redevelopment and spur occupancy rates throughout the Elm Street business district by re-establishing the Lambson Furniture building as a focal point for both attractive retail options and community housing.”

Peake prepared a lengthy history of the Lambson property, which we’ll condense as much as possible.

The Lambson Furniture building was built at the corner of Elm and Thomas streets on a parcel of land that Clinton Lambson acquired from Reuben Noble, one of Westfield’s prominent early landowners and benefactor of what is now the Baystate Noble Hospital. Lambson had established the furniture company in 1860, began construction of the building in 1868, and occupied it for business in 1869.

In its early years, the building was the site of furniture manufacturing, and many would-be furniture makers traveled to Westfield to apprentice with Lambson and his partner, William Whitney. Over the years, the furnishings side of the business focused on the manufacture and sale of home-related items like baby carriages, bedding, and desk and parlor sets, all displayed on the expansive first-floor showroom of the building. 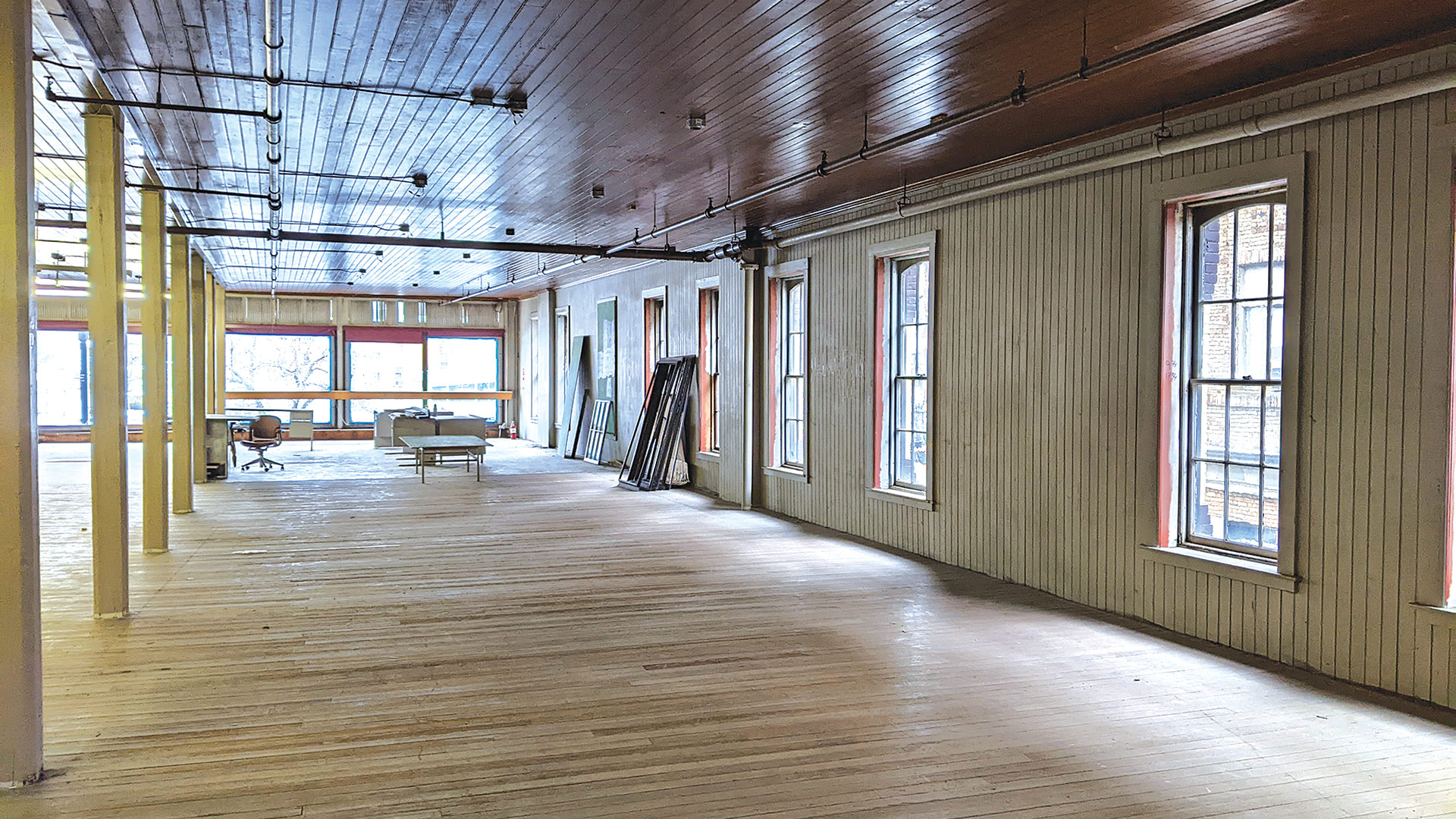 The second floor of the property is being envisioned as spaces for small businesses and/or co-working space.

“Back in those days, the furniture makers were also the undertakers. He also owned a piece of the cemetery,” Peake told BusinessWest. “He was a real entrepreneur.”

After the furniture company closed in 2002, the building was purchased in 2004 by Brian Whitely, who operated Bentley Billiards on the first floor of the Lambson Building and the first and second floors of the adjoining building until it closed in 2007. During the 12 years that the property was unoccupied, Whitely upgraded many of the mechanical components of the main building.

In 2011, the city of Westfield purchased the rear warehouse, which had by then gone into disrepair, in an effort to develop increased public parking to support business in the Elm Street business district. Unfortunately, the demolition of the warehouse left the back wall of the main building physically scarred, while former egress points for the two buildings were eliminated, rendering the upper floors of the main building in code violation for occupancy. The access doorways were covered with plywood, and much of the brickwork on the rear of the building was damaged. In addition, both corners of the building suffered considerable damage. Finally, demolition of the rear warehouse removed the only directly accessible restroom facilities for the Lambson building.

“We are excited and already exploring design options that would allow us to use the space to support live music and arts events that are currently being initiated by other businesses in the Elm Street district.”

Beyond the interior work, Borowski and the team see potential in developing the open space behind the building into a small public-park-like area that might be covered and provide public access to bench seating and perhaps some fixed-in-place board games. 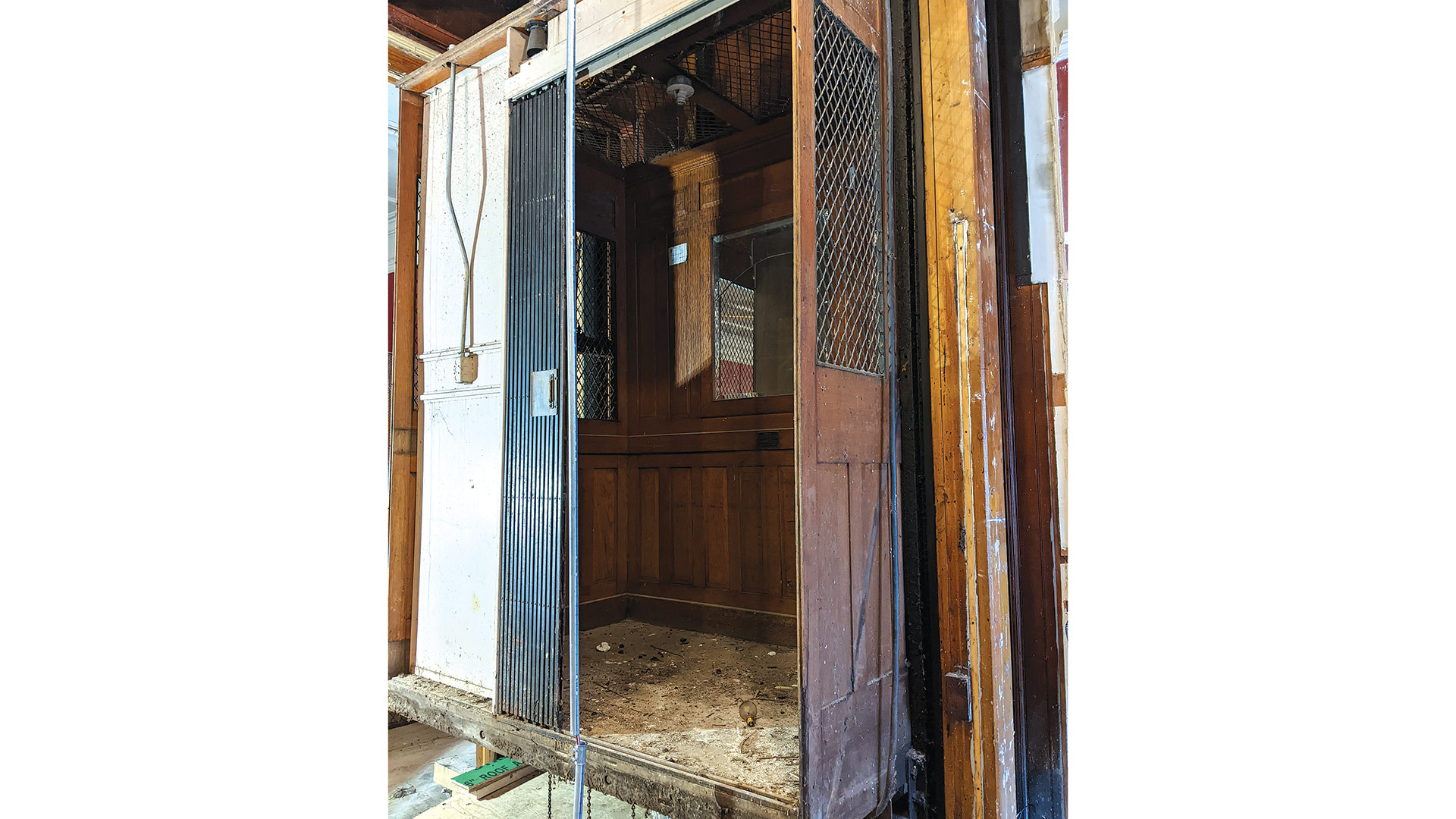 One of the current tasks is modernizing the original, 126-year-old hydraulic elevator.

“We see the back wall of the building as the least historically significant portion of the building, yet the part of the building that cries out most for creative planning and use,” the CPA funding application notes. “We are excited and already exploring design options that would allow us to use the space to support live music and arts events that are currently being initiated by other businesses in the Elm Street district.”

Before the pandemic, Borowski said, he had two restaurants lined up as first-floor tenants, but those plans later fell apart. He’s confident others will emerge, but at first, he might hire a general manager and open up a restaurant himself. “I know we would do well, and the city’s dying for some entertainment and good food.”

Meanwhile, professors from Westfield State University have visited, and ideas kicked around include a science museum or another educational project.

At any rate, if completion of the interior goes as planned, Borowski is looking at tenants moving in by the spring. “The sprinkler, electrical, water, sewer, all the infrastructure is done, and I can tell you, that’s the hardest thing.”

Borowski paused for a moment late in his tour of the buildings with BusinessWest and tried to capture what initially drew him to this investment.

“My father and I looked at this as a righteous project,” he said. “This is a Westfield jewel here. This is part of the community. I feel like we’re not the owners of this property; we’re simply the caretakers. And I am privileged to take care of it, to be able to do a project that means something, you know? There’s just something here.”

And soon, there will be much more.