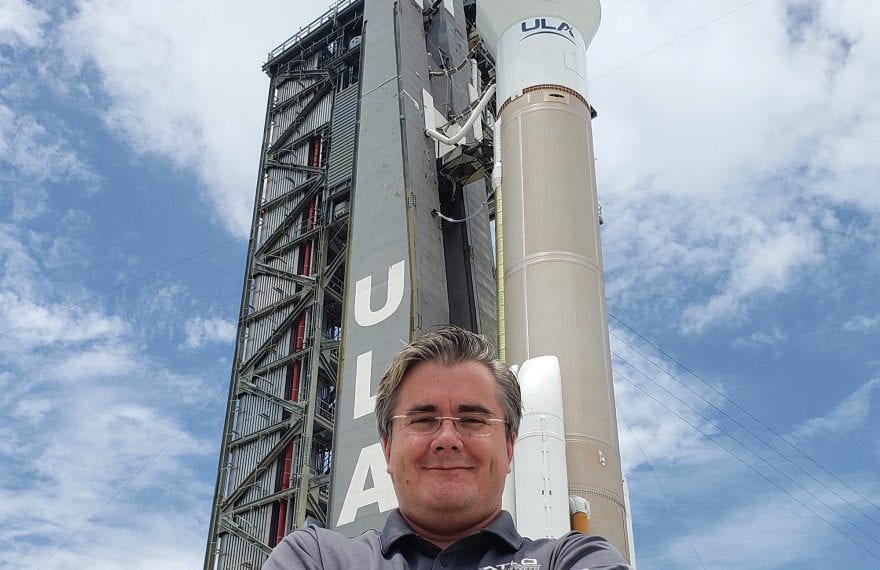 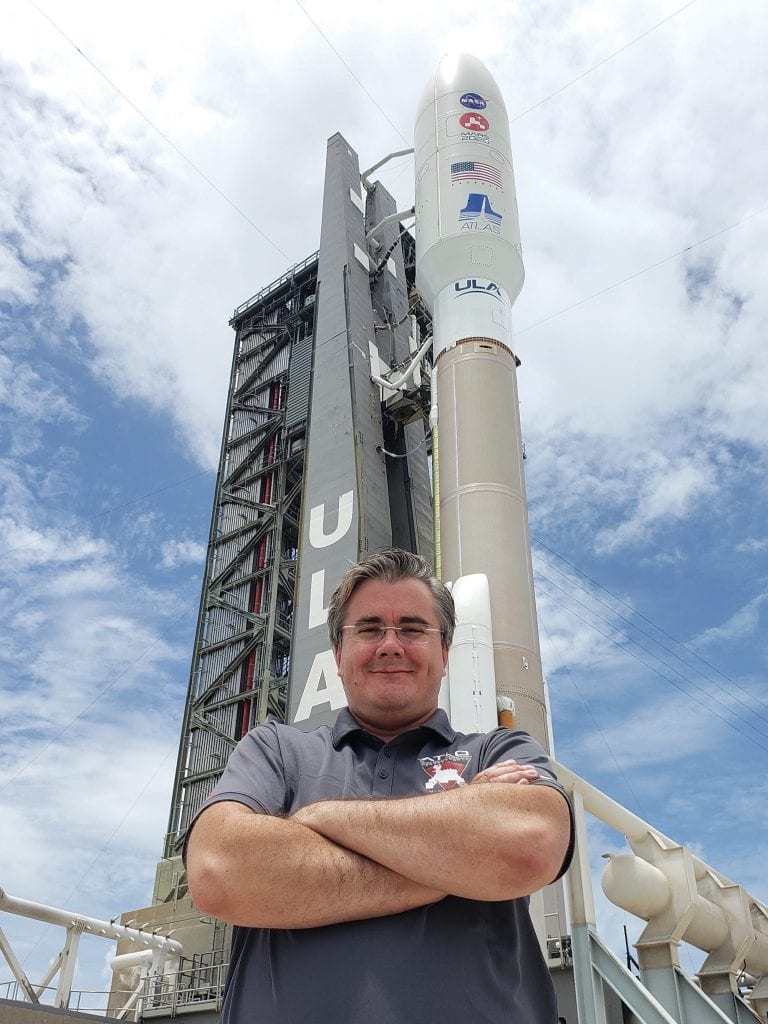 David Gruel stands next to the launchpad at the Kennedy Space Center on July 29, 2020, the day before NASA’ s Perseverance rover mission launch.

Not many people can say they’ve worked on every U.S.-led rover mission to Mars. One who can is David Gruel, a Holyoke Community College graduate from the class of 1991.

Five years out of HCC, Gruel was part of the Pathfinder mission that landed the Sojourner rover on Mars, the second Mars mission since the Viking became the first-ever U.S. mission to Mars in 1975. Sojourner had limited movement when compared to other rovers (most recently Perseverance) that travel across the planet, but it was a milestone nonetheless.

“Pathfinder was the return to the red planet some 20 years after Viking,” he said of the rover that launched in December 1996, landing on Mars in July 1997.

After that, through his job as an engineer at the Jet Propulsion Laboratory in Pasadena, Calif., Gruel was among the crews working on the Spirit, Opportunity, Curiosity, and Perseverance NASA rover missions.

Considering that Gruel falls into a category of people for whom the maxim “it’s not rocket science” most definitely does not apply, the 50-year-old is modest and candid about his high-school years as an avid underachiever. He is equally clear about the role HCC played in putting him on a path to a career in rocket science. In fact, he flat-out declares that, if not for HCC, he wouldn’t be where he is today.

“I still have an incredible memory of the math and physics professors at HCC, and it was mutual. They went out of their way to know their students and to figure out where they could help.”

As a student at Westfield High School, Gruel spent more energy stocking grocery-store shelves, tending to the car those earnings bought him, and socializing with his friends than on academics. “I was looking for the easy road out at all times,” he admits.

After graduation, when many of his friends headed off to four-year colleges, Gruel continued working in the grocery store. “And then I realized I needed a different challenge in life,” he said.

That’s how he ended up at Holyoke Community College. Despite a less-than-stellar high-school transcript, he knew HCC “would actually give me a chance,” he said. “HCC was there to give people a second chance.”

Once enrolled, encouraged by his professors, he buckled down. He believes he had a better academic experience at HCC than he would have had he attended a four-year program right out of high school.

“The classes were small, and the teachers actually cared about you,” he said. “I still have an incredible memory of the math and physics professors at HCC, and it was mutual. They went out of their way to know their students and to figure out where they could help.”

It was not easy. He worked two jobs while a full-time HCC student, sometimes studying while logging third shift at a gas station.

“I was willing to work at it,” he said, “but there were people who were willing to support me, and that’s what I needed.”

Gruel graduated with honors and an associate degree in engineering, an accomplishment he remains proud of to this day. “This was something I had done for myself, and I had earned it.”

It also earned him acceptance at Rensselaer Polytechnic Institute in Troy, N.Y., where he found he had a real affinity for engineering. And here is where his humility rears its head again.

“A lot of things went my way,” he said. “In addition to working hard, there’s a lot of luck involved in where we end up in our lives.”

In his senior year at RPI, he learned that two friends who also had gone to HCC were doing co-op semesters in the field, working at engineering jobs. He decided to pursue one, landing a co-op placement at the prestigious Jet Propulsion Laboratory (JPL) in California, a federally funded research and design center managed by Caltech, with the vast majority of its funding and contract work coming from NASA. 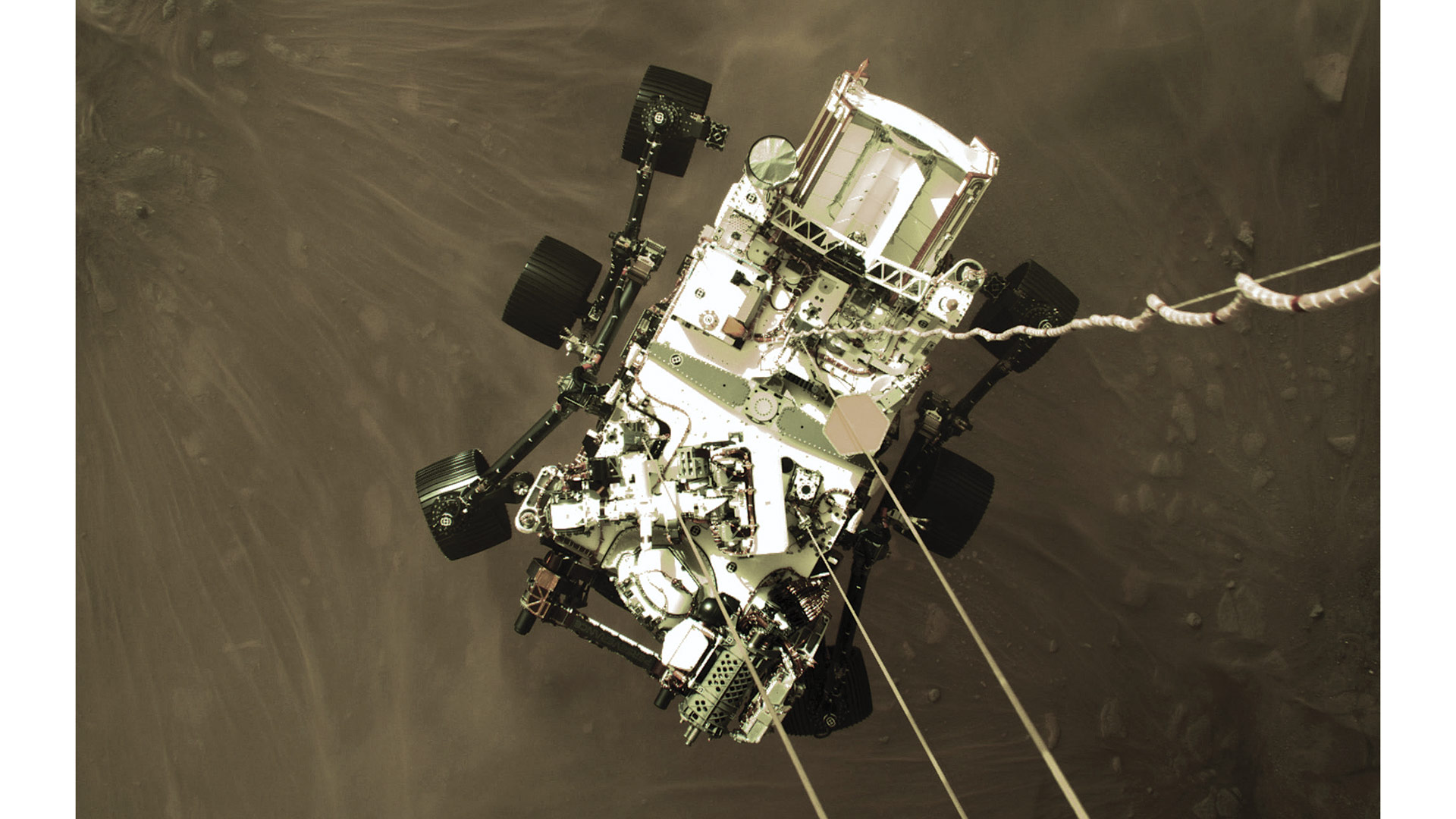 Dave Gruel’s favorite photo of Perseverance was captured moments before the Mars landing by one of the EDL (entry, descent, landing) cameras he installed on the rover.

Gruel thought the experience would spice up his résumé by adding that he worked on a team designing interplanetary spacecraft. Little did he know it would lead to his life’s work.

After eight months, he went back to RPI to finish school and graduate. Once on the job market, the Jet Propulsion Laboratory was among the job offers he received, and though he always imagined settling down in New England, he found himself changing those plans when such an enticing job.

“The challenge of JPL massively dwarfed the benefits of being in New England,” he said.

Gruel’s role in the last two Mars missions was to lead the team known as ATLO (“I’m the boss man,” he said cheerfully.) ATLO stands for Assembly, Test, and Launch Operations. Essentially, the team takes all the parts for the rover and its spacecraft — tens of thousands of them — and assembles them.

“We get delivered to us a bunch of intricate Legos,” is how Gruel put it.

Next the team conducts endless tests to simulate launch, touchdown, and the harsh conditions on the ground. “So when it’s cruising from Earth to Mars, it works as designed,” he noted.

To simulate launch, the machine goes into a large vibe table; to mimic the Mars environment, it goes into a vacuum chamber that gets as cold as the red planet itself.

From mission start to landing, it takes about six to eight years, he explained. And timing is everything: because the planets align every 26 months in a way that creates optimal conditions for Earth-to-Mars travel, all assembly and testing must be fully complete when that time comes.

“The schedule pressure is intense,” he said. “We need to get our testing done and our design done in order for it to be ready to launch.”

In addition to finding a career at JPL, Gruel met his wife, Danelle, there when she was working in the Finance division, though now she stays home with their two boys, Dylan, 14, and Ethan, 11 (who also love Legos, as well as watching mission launches with their father).

Typically, once a mission has landed, Gruel’s role slows down quite a bit, but the Perseverance landing in February 2021 was different because he had installed a camera system to take video and still images of the descent, and he was responsible for it.

“Even after we launched, I was still intimately involved in making sure that system was going to function,” he said. “We continued to do testing on it to make sure it would reach its full potential, and it sure did. The images were amazing.”

Those images captured the spacecraft’s descent and landing, including video of the rover setting down on Mars and kicking up dust. “We joked it was kind of like our selfie cam,” he said.

Back to His Roots

In 1998, Gruel returned to HCC as the recipient of a Distinguished Service Award at commencement and delivered the keynote address, an invitation he seems to still find hard to believe to this day: “I spoke at commencement! Me, a flunkie out of high school!”

It’s a fact he mentions not to boast, but rather to inspire. If there’s anything he hopes people take away from his story, it’s that they should never underestimate their potential, even if they’ve had trouble living up to it.

“When you as a person make a decision to do something, the sky opens up,” he said. “The sky is no longer the limit.”

And that’s coming from someone who knows how to get to Mars.

Laurie Loisel is a freelance writer based in Northampton.