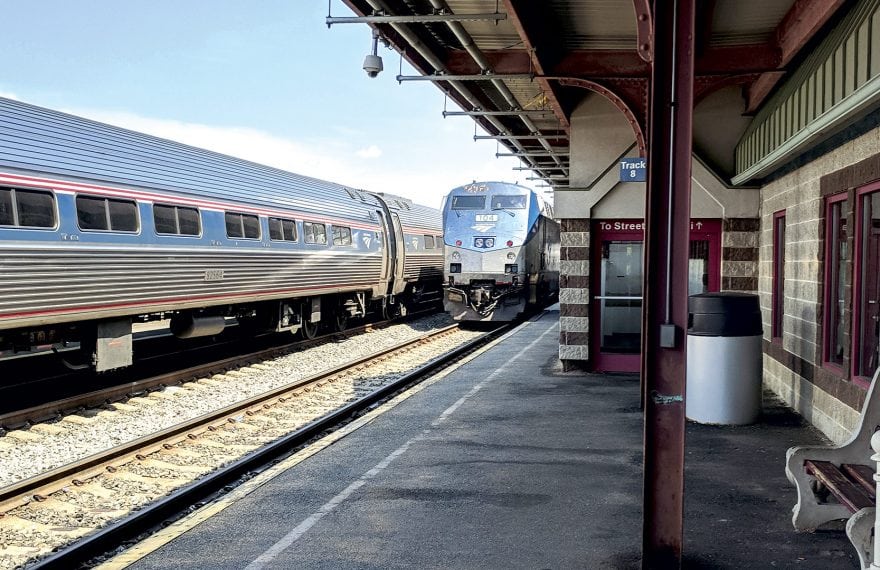 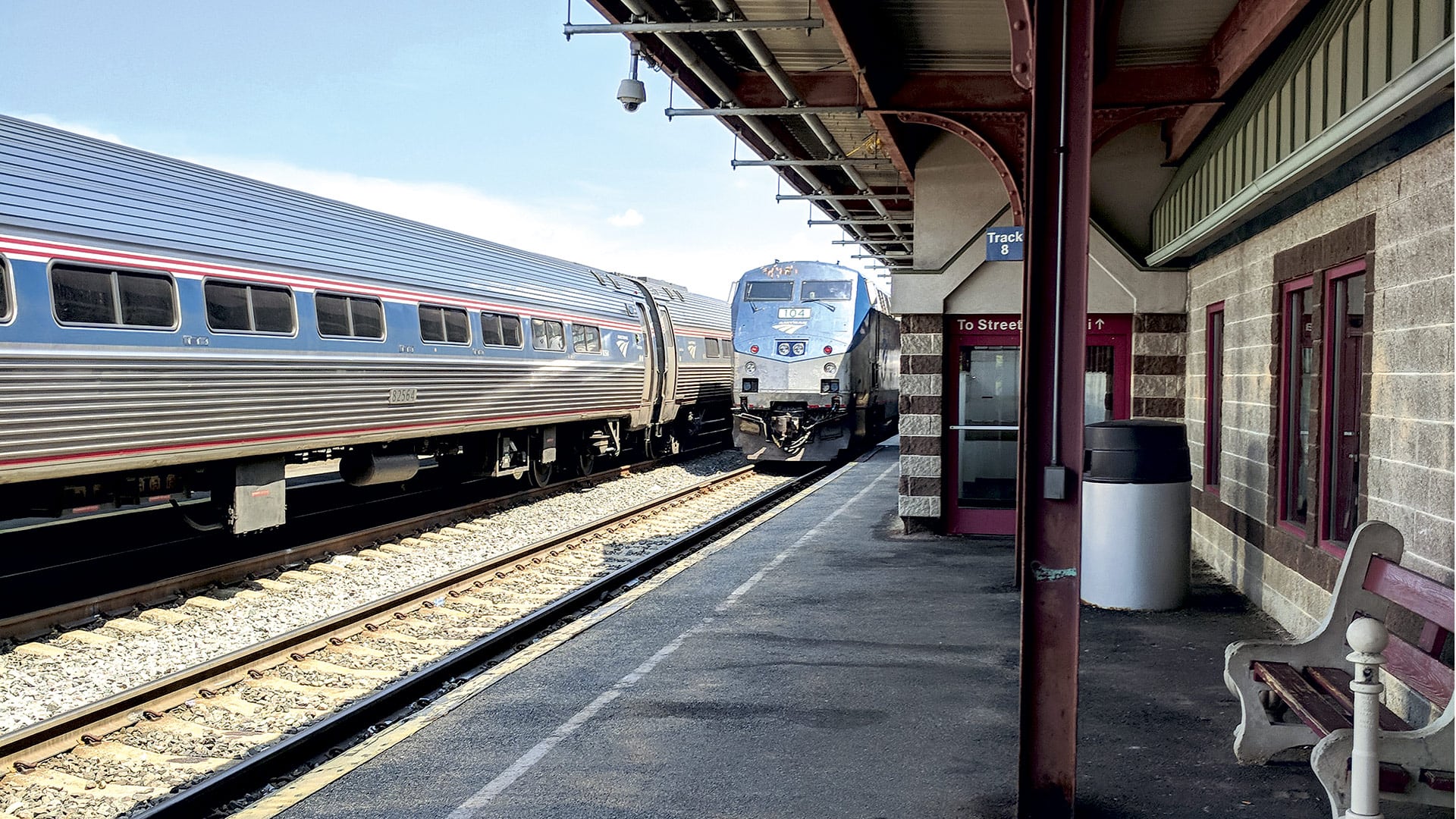 The launch of the Hartford line last month, which expands rail activity from Union Station in Springfield to a host of Connecticut stops, has been a success, judging by early ridership. More important, it has municipal and economic-development leaders from Greater Springfield thinking about the potential of a Springfield-to-Greenfield service beginning next year, as well as the viability of east-west service between Boston and Springfield. It’s about more than riding the trains, they say — it’s about what riders will do once they get here.

When is a train not just a train?

Because the ones stopping at Union Station as part of the so-called Hartford line — which connects Springfield with New Haven via six other stations that roughly track I-91 through Connecticut — represent more than that, said Kevin Kennedy, Springfield’s chief Development officer.

The reason is simple symbiosis. At a time when Springfield is preparing for an influx of visitors with the opening of MGM Springfield next month, in addition to other significant economic-development activity downtown, a train stop for several CTRail trains each day promises to make the city a more attractive destination, Kennedy said. That could have spinoffs for other regional attractions, particularly after a northern rail line is completed next year, connecting Union Station with Greenfield.

“When they bring Greenfield and Northampton and Holyoke into the loop with new depots (all built over the past few years), that’s going to have a dramatic effect on how everyone comes and goes from Springfield,” Kennedy said. “MGM is an entertainment giant, and we’re basically going to be sharing [visitors] up and down the Valley, sending some of our visitors to MGM north to see what goes on up there, and seeing an awful lot of people come here. That’s connectivity.”

Michael Mathis, president and chief operating officer of MGM Springfield, agreed that expanded rail will benefit not just the casino, but the city and region as a whole, helping to brand it as an accessible travel destination.

“This new high-speed connection will be a welcome catalyst for business and tourism in the city and connect two important regional economic hubs,” Mathis told BusinessWest. “As awareness of the service continues to grow, we anticipate more and more people will be attracted to the area.”

To further promote exploration of the city from Union Station, MGM and the Pioneer Valley Transit Authority will launch the Loop, a free shuttle service linking downtown tourist attractions, hotels, restaurants, and arts and culture destinations. Debuting Aug. 24 as part of MGM Springfield’s opening, the Loop will connect Union Station, the Springfield Armory, Springfield Museums, the Basketball Hall of Fame, MGM Springfield, and the MassMutual Center, as well as four downtown hotels. 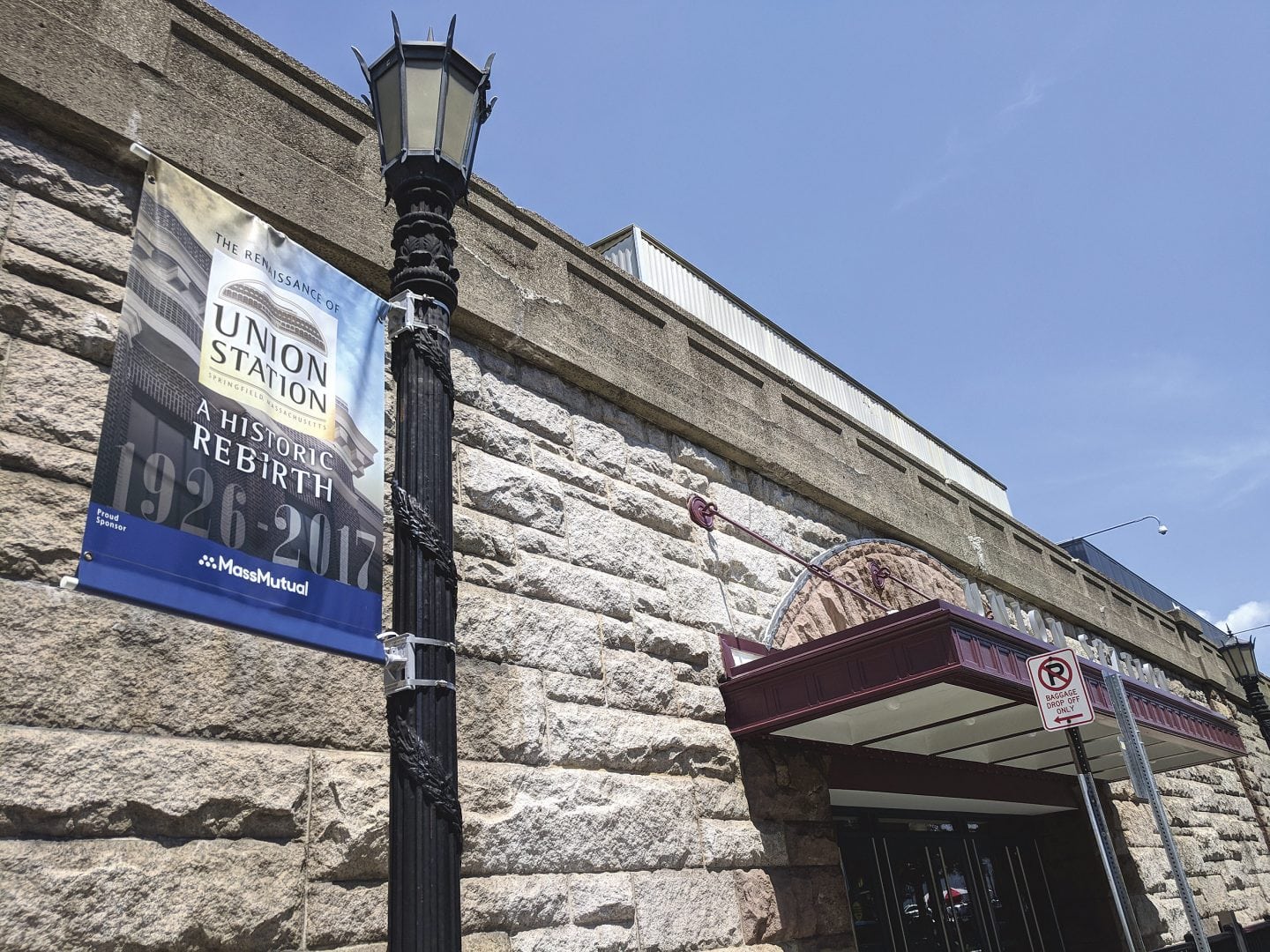 Rail activity in Union Station has picked up significantly, and expanded Springfield-to-Greenfield service next year will continue that trend.

“Any time you have a significant number of individuals coming into the city, that’s an economic opportunity,” said Rick Sullivan, president and CEO of the Western Mass. Economic Development Council. “Certainly, things are happening in the region, and downtown Springfield in particular, and it’s a big plus that it’s very walkable, or an easy commute with the MGM trolley to different venues here.”

Looking ahead, Gov. Charlie Baker recently announced that passenger rail service between Springfield and Greenfield will begin on a pilot basis in spring 2019. Under the agreement, MassDOT will fund the cost and management of the pilot service, which will be operated by Amtrak and conclude in fall 2021.

The pilot will provide two round-trips each day and make stops at stations in Greenfield, Northampton, Holyoke, and Springfield. Southbound service will be provided in the morning hours, and northbound in the evenings. This pilot service will leverage the MassDOT-owned rail line currently used by Amtrak’s Vermonter service.

Economic-development officials in the Pioneer Valley, and the cities connected by that future line, will likely be cheered by the early success of the 62-mile Hartford line, which began operating on June 16, with trains running approximately every 45 minutes between Springfield and several communities in Connecticut, including Windsor Locks, Windsor, Hartford, Berlin, Meriden, Wallingford, and New Haven. This expanded service is in addition to the existing Amtrak service throughout the corridor.

After two days of free rides, the line began running at regular fare prices on June 18, and in that first full week of June 18-24, ridership on the Hartford line totaled 10,719 customers, which Connecticut Gov. Dannel Malloy characterized as a success.

“I’ve spoken with scores of riders who have begun to use the Hartford Line and who are saying their commute has become much easier and less stressful,” ConnDOT Commissioner James Redeker said in a statement. “With easy access and connections with our CTtransit buses, we are opening up all kinds of options for getting around Connecticut — whether you’re going to work, to school, or simply playing the role of tourist.”

“We know that it will take some time for this new rail service to grow to full maturity and become part of the everyday lives of Connecticut residents, but there is definitely an excitement about this long-overdue train service,” Malloy said at the time. “At the end of the day, this transit service is about building vibrant communities that attract businesses, grow jobs, and make our state a more attractive place to live, visit, and do business.”

This is precisely the model Massachusetts officials want to see replicated here — right away around Union Station, and eventually up and down the Valley as well.

“With the Loop service starting there, it will provide an opportunity to see Springfield even beyond the casino,” said Chris Moskal, executive director of the Springfield Redevelopment Authority.

The activity at Union Station has impacted other downtown development as well, Kennedy said, including Silverbrick Lofts and future market-rate apartments in the Willys-Overland building. “The 265 units at Silverbrick wouldn’t have happened without Union Station,” he noted. “They were very specific about that.”

Beyond north-south rail, however, are much more ambitious rumblings — and they’re rumblings from far, far down the proverbial track at this point — about east-west rail service connecting Boston and Springfield, and perhaps Albany one day.

“Carrying out a comprehensive study on east-west passenger rail will allow us to have a rigorous, fact-based discussion regarding options for potential service,” state Transportation Secretary Stephanie Pollack said last month. “Many legislators, local and regional officials, and business leaders called for such a study, and we are pleased to take a step in advancing this planning for future service.”

Eventually, Kennedy told BusinessWest, rail service from, say, Montreal to New York and from Boston to Albany would position Springfield in an enviable spot as a central hub along both lines.

U.S. Rep. Richard Neal said as much when the Hartford line opened last month, calling enhanced rail service between Springfield and Boston a potential “game changer” for the region. “Investing in our transportation infrastructure will benefit people across the entire Commonwealth of Massachusetts.” 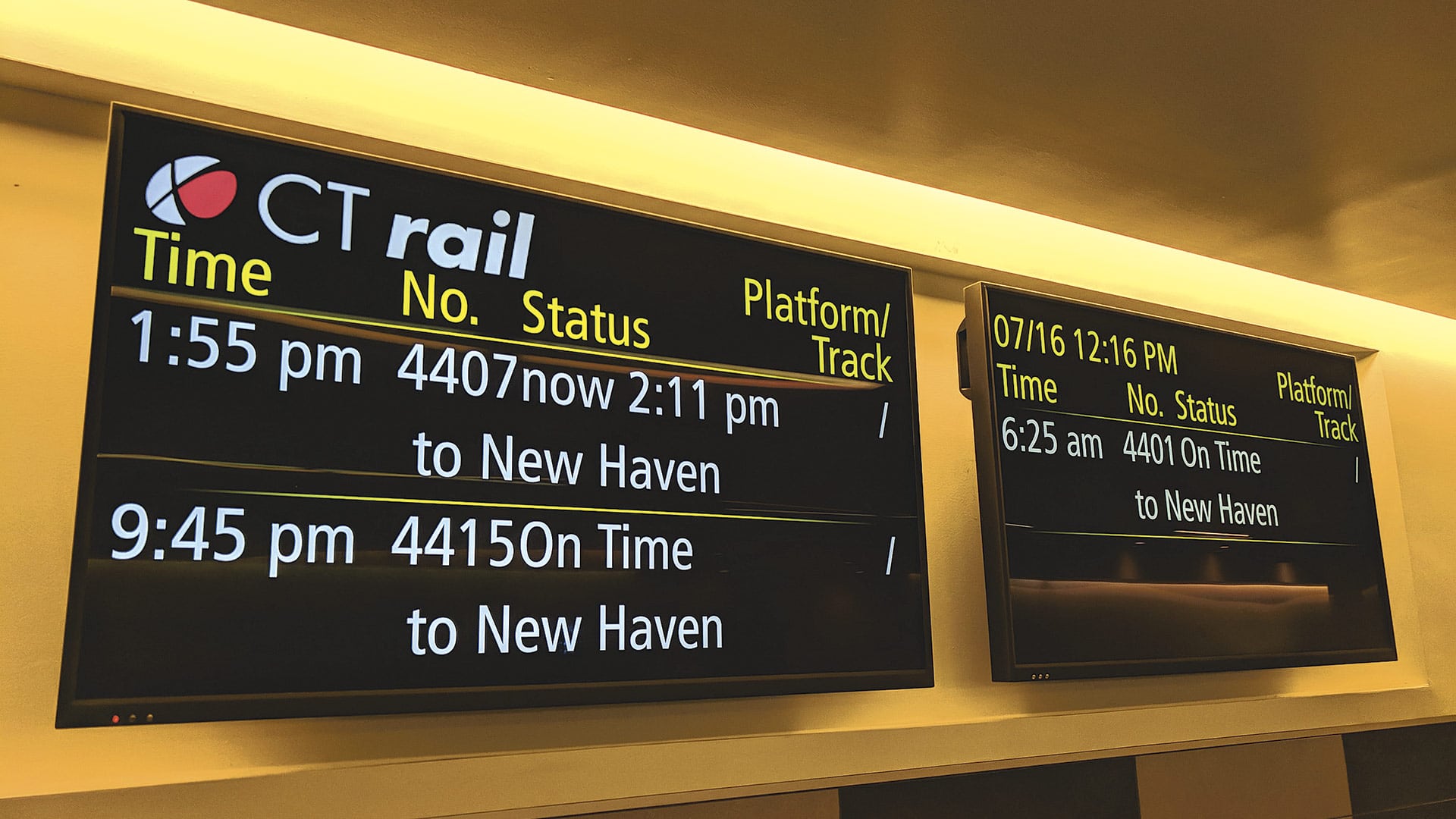 Between Amtrak and now CTrail, riders have several options each day to travel to and from Connecticut and beyond.

Sullivan said increasing the speed and ease of travel to a destination like Springfield, with more frequent schedule options, will open up opportunities to attract visitors from both the north and south. He’s not as optimistic about east-west rail, at least not in the next decade, since it’s not in the state’s five-year budget plan and has many logistical and cost hurdles to overcome.

“But certainly, the Connecticut line coming in gives the Convention & Visitors Bureau some travel and tourism opportunities, and it’s incumbent on those entities to sell the region hard — and they’re doing that,” he said. “It’s a significant opportunity.”

Kennedy noted that, when he travels on the eastern part of the state, each T stop is marked by renovated buildings and generally lively activity around the stations. If Massachusetts can be traversed in all directions by rail, he believes, highways could become less congested while trains bring economic energy into each city they stop in. “I see really good things ahead and significant potential,” he said. “Trains are a key component of the future.”

That’s why it’s important for Springfield to continue to grow with rail in mind, he added.

“One of the reasons for our recent success is that we planned bigger rather than smaller,” he said. “Springfield had a history of thinking too small, but certainly over the past five to eight years, we thought bigger, and it’s worked very well. We’ll continue with that big-picture thinking with Union Station as a critical node.”

“Believe me, we’ve had an unbelievable response from people who use Union Station every day,” he said. “From what I’m hearing from people, they’ve said, ‘where has this service been?’ I’m like, ‘it’s here now.’ The spinoff potential has excited people. You can take the bus from there. The activity in and around the station is enormous. And the opportunities are only going to expand.”