Restored Brewer-Young Mansion Set to Begin Its Next Chapter 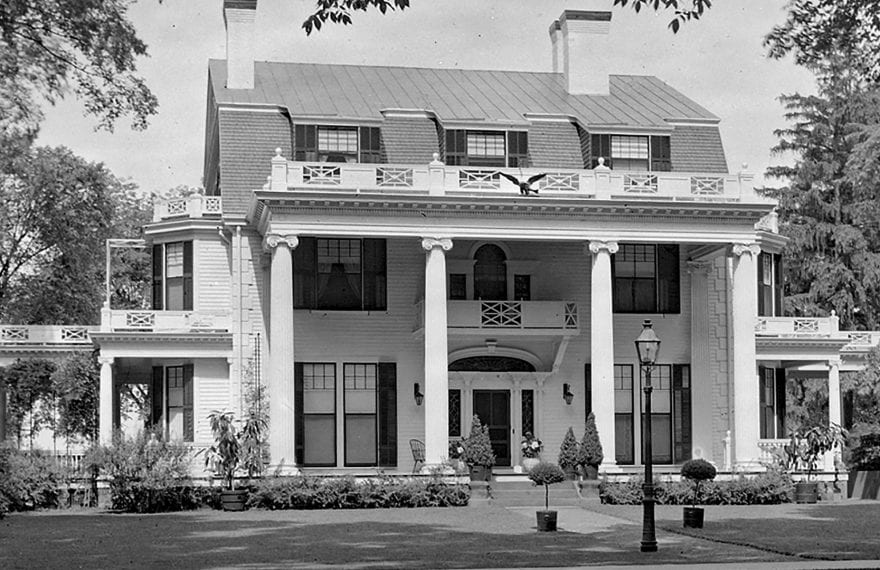 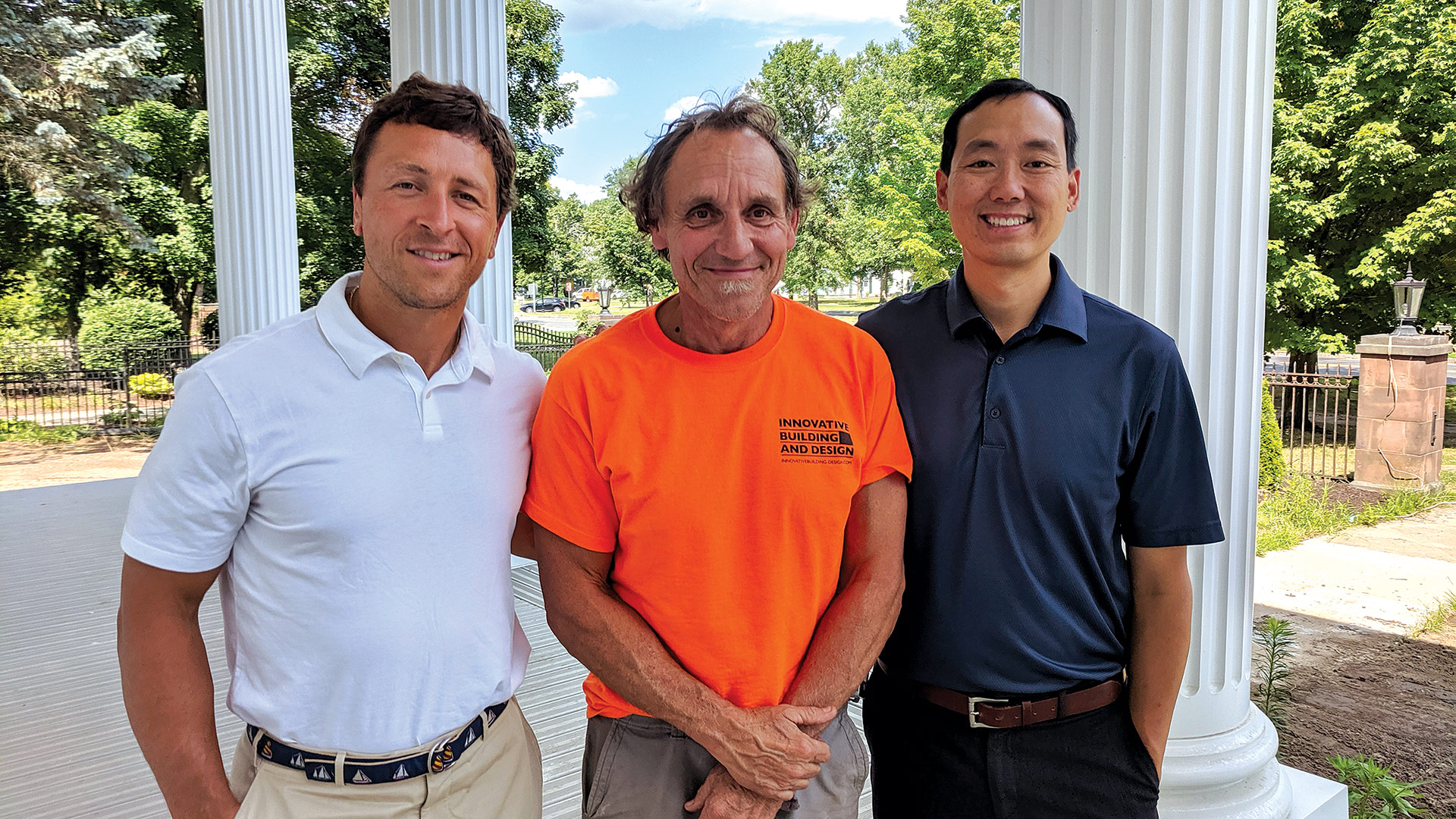 In its heyday, the Brewer-Young mansion was the center of Longmeadow’s social scene. Those who don’t remember those days know it more as an eyesore alongside the town green, after a string of owners over the past 30 years were unable to maintain the decaying structure. Enter a trio of investors with a commercial vision for the property, one that would pump economic vitality into the building while restoring its original architecture — and historic importance.

Andrew Lam says he’s “very invested in Longmeadow’s history,” and not just because he lives next door to it.

Specifically, his home abuts the Brewer-Young mansion, a sprawling, Colonial Revival estate built in 1885 that has, to put it charitably, seen better days. 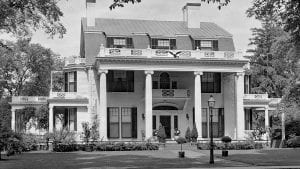 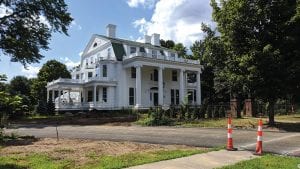 Restoration work aims to return the mansion to its former glory (top photo, courtesy of the Longmeadow Historical Society).

“I’m very interested in making sure we preserve this property and turn it into a positive on our green — not to have it torn down or turned into something negative,” said Lam, an eye surgeon, author of three history books, and co-owner, along with financial-services professional Chris Orszulak and contractor Henry Clement of Innovative Building and Design, of the mansion that will soon begin the next phase of its intriguing story — as a professional office complex for small businesses.

The 10,900-square-foot house, at 734 Longmeadow St., has undergone a slow decline since it left the Young family — of Absorbine fame — in 1989, and has fallen into significant disrepair over the past decade, especially after its last owner, Shahkar Fatemni, was foreclosed on in 2013 and evicted in 2015.

The problem is that — as a string of owners since 1989 have learned — with its massive size and the restoration work it requires, it’s just not viable as a residence anymore; when the front columns collapsed several years ago, it cost Chase Bank $120,000 just to repair the porch. Even if the town got lucky and a wealthy investor stepped in to buy it, Lam noted, what would happen when he moved out? Longmeadow would be in the same situation all over again.

Orszulak also lives in town — in fact, with kids at Center Elementary School, right across the street, and a commute to work that takes him right past the mansion, he’s had a good view of it for a long time. He discussed some sort of commercial development at the site with Lam several years ago, when Lam still believed a residential use was possible. 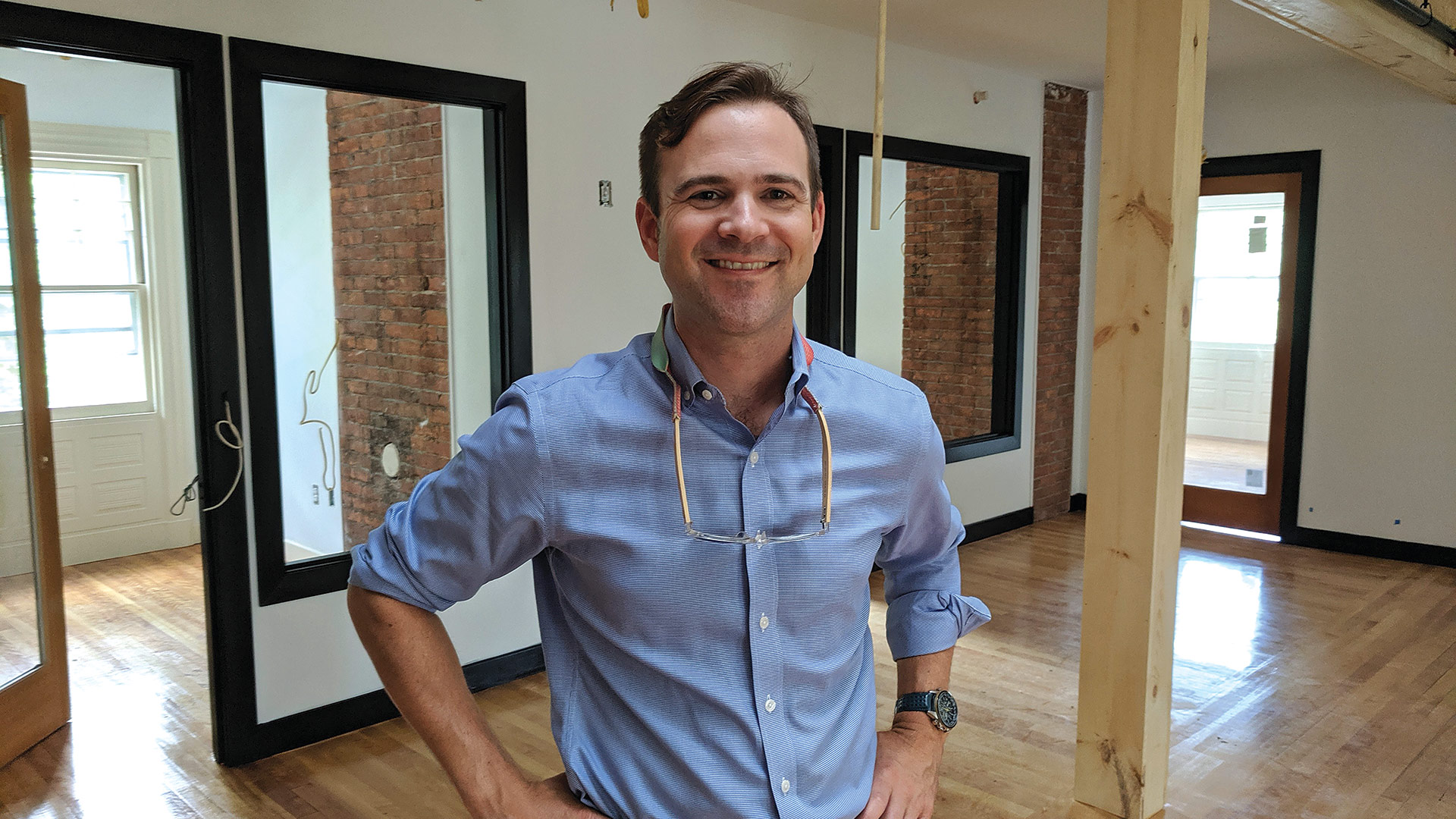 Jason Pananos in 734 Workspace, the co-working center he’s developing on the third floor.

“I basically said to him, ‘listen, if it ever gets to a point where it comes on the market and you agree it’s not a viable single-family residence, why don’t we talk about partnering on repurposing it and putting it back on the path to sustainability?” Orszulak told BusinessWest. “I’ve always felt like the property was a key part of the town center, and there was a way to sustain and repurpose it.”

Fast-forward a few years — and a massive restoration effort — and the three owners will welcome a nearly full house of commercial tenants in September. The Youngs’ ballroom is now the home of financial advisers Shawn Torres and Alecka Kress of Vitae Wealth Management. The minister’s parlor is occupied by event planner Lindsay Maloni. Setting up shop in the formal dining room are Melissa Buscemi and Maria Arsenieva, program director and financial advisor, respectively, for Reboot, a national nonprofit organization dedicated to promoting Jewish heritage. Psychologist Bonnie Connell will practice in the mansion’s former kitchen.

Meanwhile, Dr. Melissa Johnson, a surgeon at Baystate Medical Center, will operate a practice on the entire second floor, and the third floor is given over to a large co-working space.

The public will have an opportunity to tour the restored mansion as part of the Friends of Storrs Library Tour of Homes fundraiser on Oct. 5. What they’ll find is a lot of history — and, for the first time in many years, hope that a new, vibrant chapter is being written within what was, very recently, only an eyesore alongside the town green.

The mansion’s first resident was Rev. Samuel Wolcott, known for writing more than 200 Christian hymns. It was built for him by his two sons, who made their fortune in silver mining in Colorado. Ownership passed to State Sen. Edward Brewer in 1901, but the mansion’s third owner, Mary Ida Young, truly put it on the map.

The matriarch of a family that had made its fortune from Absorbine, a horse liniment popular in the days before automobiles, Young lived there from 1921 to 1960, and during this time it was truly a Gilded Age mansion, with extensive grounds and many servants and gardeners, serving as the site of important social gatherings. 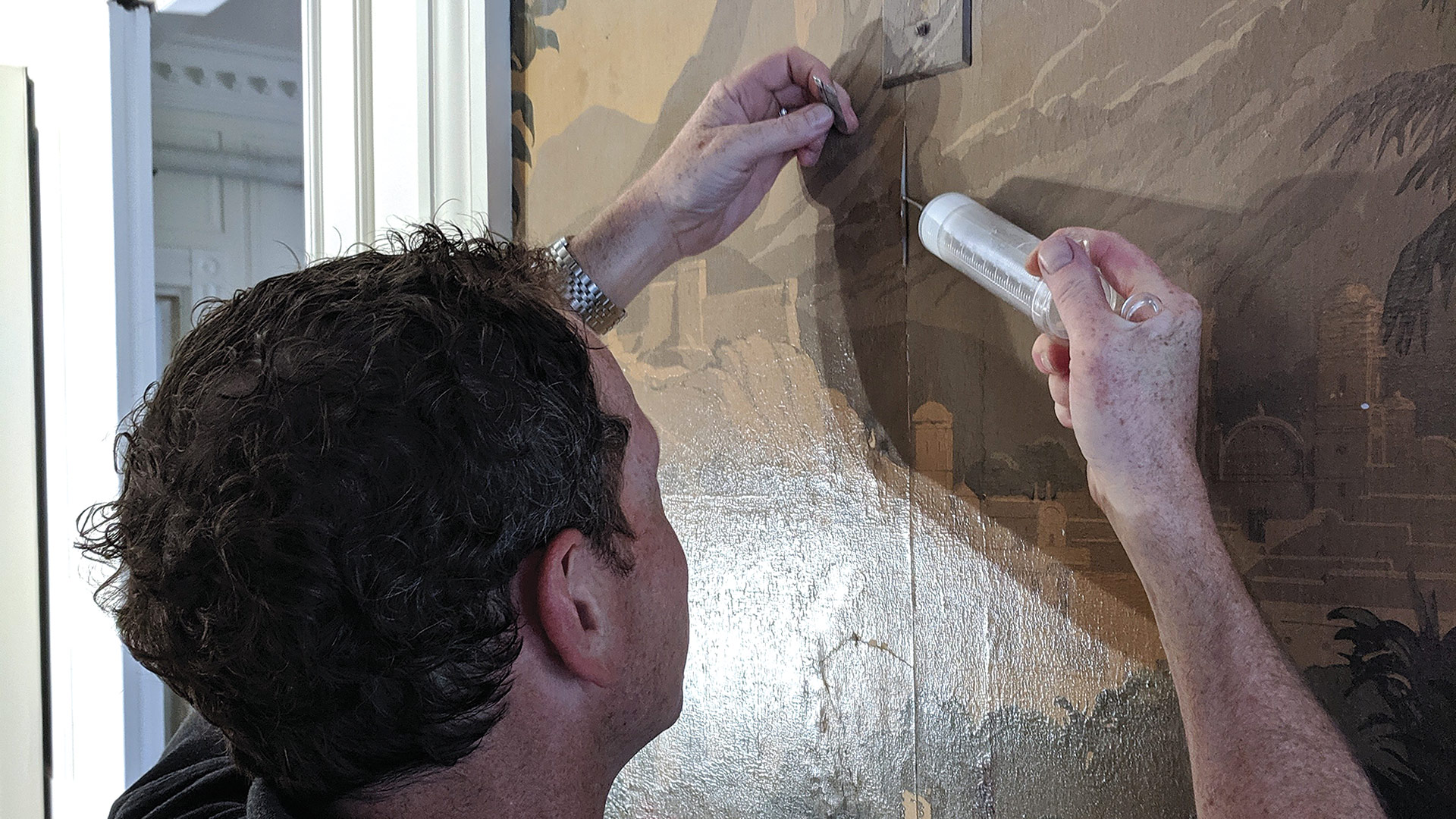 A worker from Blackburn Building Conservation engages in the painstaking work of repairing the original wallpaper.

The Young family retained it until the 1980s, over the years selling off parts of the estate toward the Connecticut River — some was given up for I-91, more to enable development of the Ely Road neighborhood in the rear. A series of residential owners owned the home it in the 1990s and 2000s, each with plans to restore it and put it to use (among the plans were an event space and a bed and breakfast) — but each kept running into the high cost of repair and maintenance.

As it decayed further, Fatemni, five years before his eviction, sought a residential buyer, but found none. And once the property was abandoned, it went downhill quickly.

“Over these eight years, it really started decaying rapidly,” Lam said. “The front portico columns collapsed. The porches were rotting and threatened to fall. The inside had water damage from roof leaks. It was a terrible eyesore for the town because it is located prominently at the center of the historic green.”

Lam, who served for years on the Longmeadow Historical Commission, wanted to preserve it, but every historical preservation society or benefactor he approached realized it was too expensive to maintain — “it was a true money pit” — and declined to help. One society said taking the project on would have bankrupted it.

Finally, he came around to the idea that a commercial use would make sense, and teamed with Orszulak and Clement to purchase the property for $470,200. But not just any commercial use, like a bank or chain store that would be out of character for the town center. Instead, they envisioned a professional office complex that would require renovating and restoring, not tearing down, this piece of history.

“It is probably the best example of Colonial Revival architecture in the Pioneer Valley,” Lam told BusinessWest. “All three of us cared deeply about preserving the mansion in the best possible way.”

That use, however, required a zone change — and a two-thirds vote at a special town meeting. “We had a strong case it was in such terrible condition that it was quite obvious something needed to be done, but any time there’s a change, there are always going to be people for and against it.”

Their effort was buoyed by an informational campaign — and the support of Todd and Tyler Young, the last of the Young family to reside in the mansion. 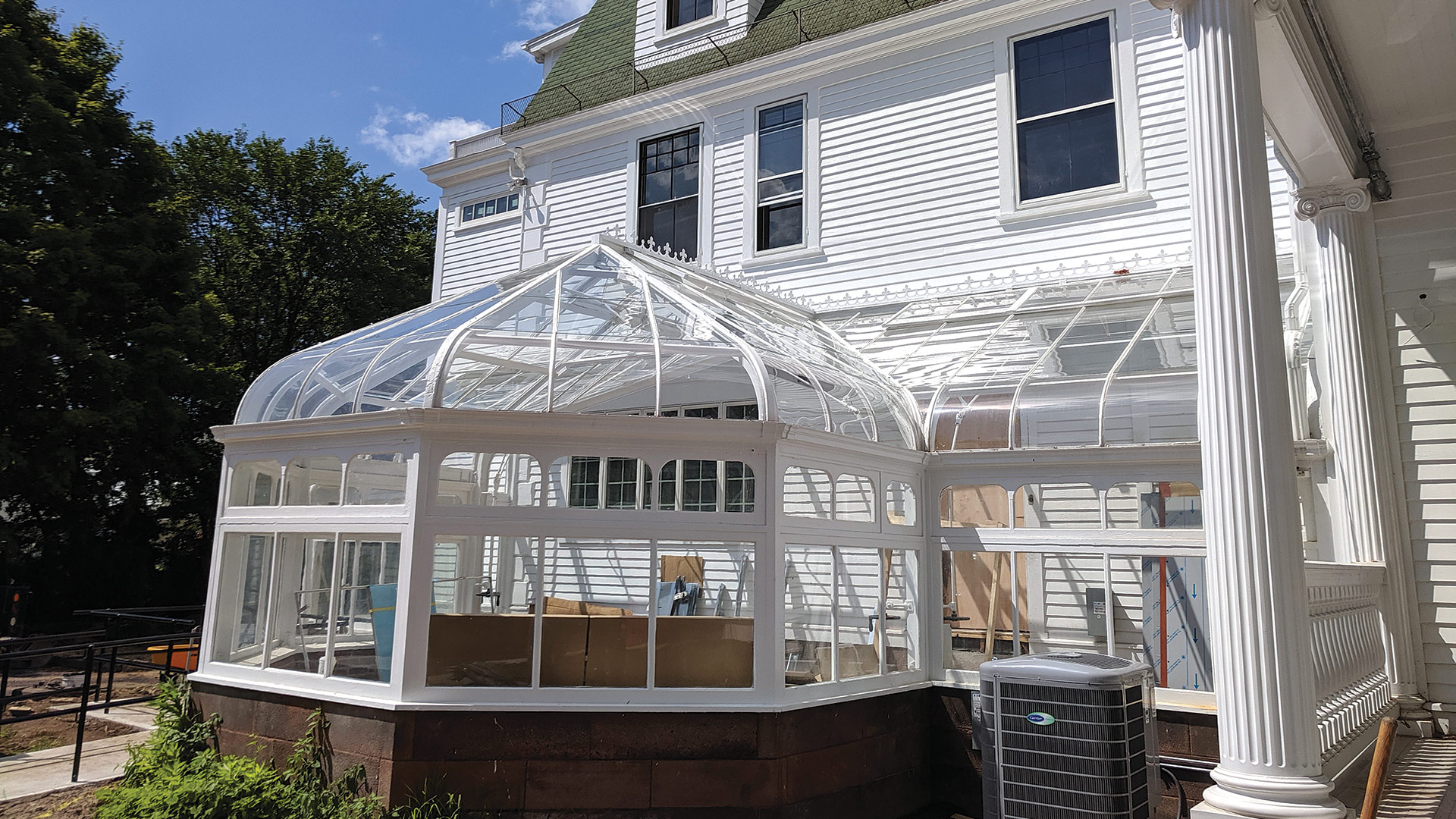 The striking conservatory at the mansion was restored with new tempered, shatter-proof glass.

“When considering the various use cases (bed and breakfast, condominiums, etc.) and related market and financial analysis the current owners have undertaken, our family honestly believes that the proposal of re-zoning this property for professional office space is the most realistic and best use of this uncommon structure,” they wrote to Longmeadow Buzz, an online forum, in January 2018. “Outside of a viable repurposing and renovation, we sincerely believe demolition of this prominent building is a certainty once it is officially deemed uninhabitable or a catastrophic event such as a partial structural collapse or fire occurs — whichever comes next.”

The vote that month was close, as 69% approved the zone change from a residence to professional offices. “That’s different from commercial zoning,” Lam said. “We didn’t want it to be a McDonald’s or a gas station or any building that didn’t look historic.”

Since then, he, Orszulak, and Clement have poured $1.3 million into renovations, with more to come — the original budget was $2 million, and Lam thinks it will wind up in that ballpark.

It has been a delicate dance. On one hand, Lam said, “everything needed to be modernized — HVAC, plumbing, electrical. There was no central air, and the roof was collapsing. Every day brought a new challenge. ‘Oh, we need handrails.’ ‘Oh, we need an elevator.’ ‘Oh, we need a fire escape.’ But we didn’t want to take away from the historic look.”

Original features include marble floors and a grand staircase, lined by stained-glass windows, in the front foyer; a glassed-in conservatory based on the Crystal Palace from London’s Great Exhibition of 1851; and embossed leather wallpaper on the first floor designed by Zuber & Cie, an 18th-century French manufacturer that also designed wallpaper for the Diplomatic Reception Room in the White House.

“The wallpaper was literally falling apart, full of cracks and peeling,” Lam said, noting that the team commissioned Middleborough-based Blackburn Building Conservation return it to its original glory, a painstaking process involving tiny scalpels and other equipment — and plenty of patience.

“The whole staircase is priceless,” Lam said. “The goal when you walk into the building is for it to appear as it did in 1885 when it was first built — exactly the same. The staircase and stained glass are all the same.”

But today’s Brewer-Young mansion reflects the 21st century in many ways, too, such as 734 Workspace, the co-working complex Jason Pananos has developed on the third floor, featuring 10 small offices — already mostly rented — a large shared workspace, and amenities including a kitchen and office equipment. 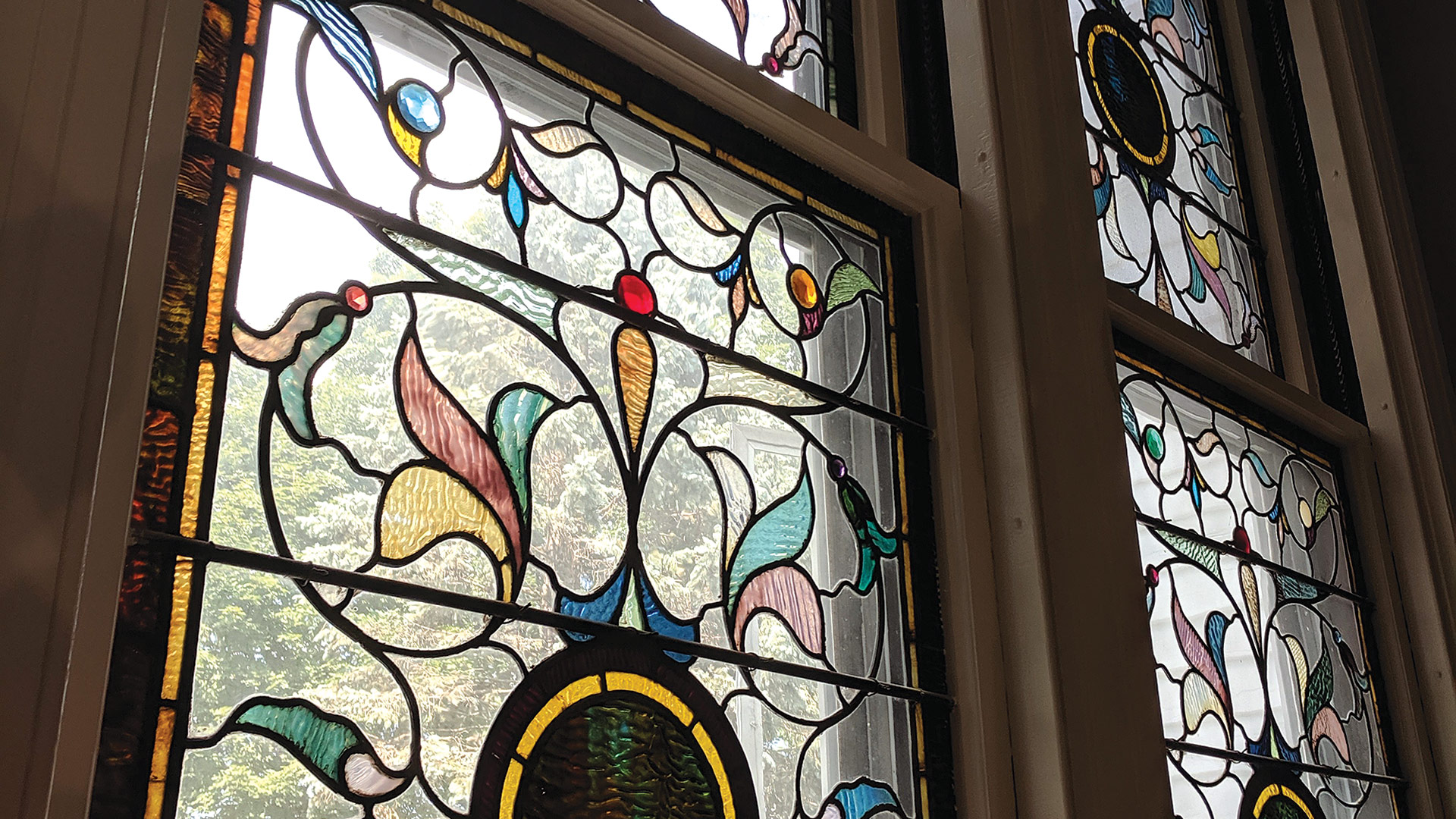 The mansion’s grand staircase is highlighted by large panels of stained glass.

“It’s very exciting. It’s going to be a vibrant place — a place where entrepreneurs and professionals come together and cross-pollinate ideas,” Lam said. “It’ll be a wonderful environment to work in. All our tenants are local; they all believe in our goal to save this mansion, and they’re willing to join us in doing just that.”

Saving the 134-year-old house means modernizing it in other ways, too, many of which require significant funds.

“Frankly, it was not clear how much it would truly cost,” Lam said. “Asbestos was discovered that would have to be removed. We needed to install a giant sprinkler system that includes the exterior porches to comply with codes. The conservatory serves no purpose from a profit standpoint, but it’s beautiful, so we replaced the old glass with tempered, shatter-proof glass.”

Even more beautiful, the partners said, was the speed at which the building was rented.

“It was a stronger response than I anticipated,” Orszulak said, noting that the tenants on board are virtually all from Longmeadow — impressive in a town that has a lower density of commercial properties than any other in the region, by far. “For us to be almost occupied before completion was really reassuring to me personally. This level of support, I think, speaks to the broad community interest in repurposing this property.”

Lam never assumed that kind success, although he was hopeful.

“That was one of the major risks we were taking — that no one would want to be there,” he told BusinessWest. “But the town strongly believes in our goals to preserve it in an aesthetically beautiful way, and that’s reflected in the people who want to be there. They’ve trusted us and agreed to rent before the building was beautiful. That’s telling, and very fulfilling to us.”