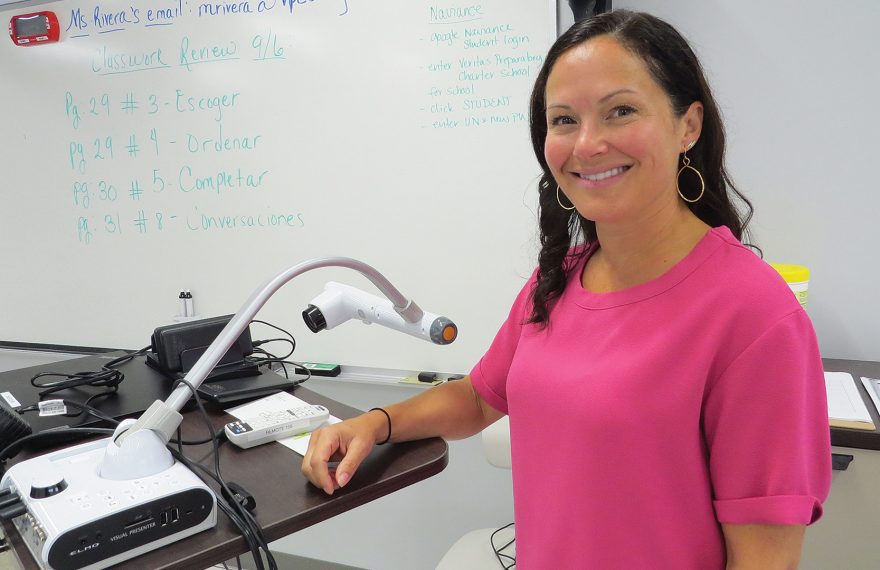 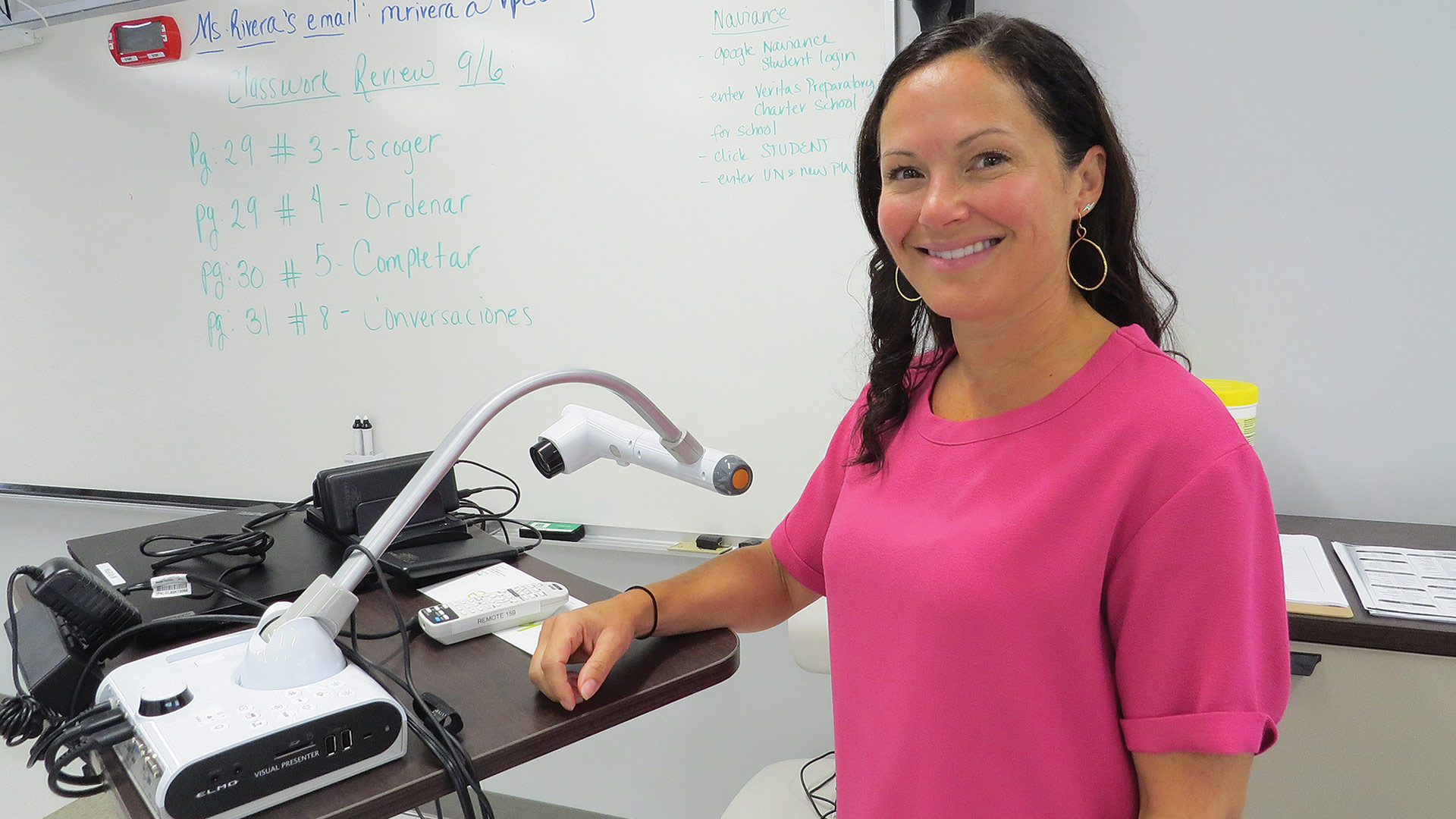 Rachel Romano, founder and executive director of Veritas Preparatory Charter School, shows off one of the classrooms in the recently opened high school.

Rachel Romano says she started Veritas Prep Charter School after becoming frustrated as a middle-school teacher in Springfield with just how ill-prepared students were to succeed — at the next level in their education, and in general.

She called it “unfinished learning,” and it was occurring at many levels, especially with reading.

“They really hadn’t made that shift from learning how to read to reading to learn, which should happen around third or fourth grade,” she explained. “But if it hasn’t happened and they come into the middle school, most middle schools are not designed to keep teaching that, so students really fall behind. When your foundation is weak, there is nothing to build on.”

It was with a desire to provide middle-school students with a better, stronger foundation so they would not fall behind that Romano started Veritas Prep Charter School, opening the doors in a former nursing home on Pine Street nearly a decade ago. And almost from the day it opened, parents and students alike were asking, ‘when are we going to start a high school?’

It took several years, considerable planning, the transformation of what was manufacturing space on Carando Drive, and many other pieces to fall into place, but that high school opened its doors late last month.

As Romano, an educator but also a true entrepreneur (and BusinessWest 40 Under Forty honoree in 2013), put it, in some ways, the new Veritas facility is high school reimagined. This is a career-focused, early-college model designed, like the middle school, to enable students to succeed at the next level — whatever that might be.

“To get two years of college under their belt while still in high school … it just compresses their timeframe to earn a degree.”

For many, it will be college, she said, but higher education is not the goal of every child.

“But every kid should have the choice,” she said. “And if they’re prepared for college … then they have options open to them; the doors are not closed to them.”

The early-college model is just what it sounds like, she noted, adding that students can take college courses while in high school and could even have an associate degree upon graduation.

Having a track record of success in college even before walking across the stage to pick up their high-school diploma instills confidence in students and a mindset that they can accomplish anything they might dream, she said, adding that this model also brings great advantages when it comes to the overall cost of a college education.

“To get two years of college under their belt while still in high school … it just compresses their timeframe to earn a degree,” she explained. “That can be a huge help when they decide to go and get their degree.”

For this issue, BusinessWest talked with Romano about the new high school, but also the broader mission to provide students with that stronger foundation and the tools to build upon it.

As she offered BusinessWest a tour of the new high school, Romano started in the gym.

The gym is an important part of this equation, she said, noting that the middle school doesn’t have one, and students, parents, and others involved in the design process of the high school identified it as priority. 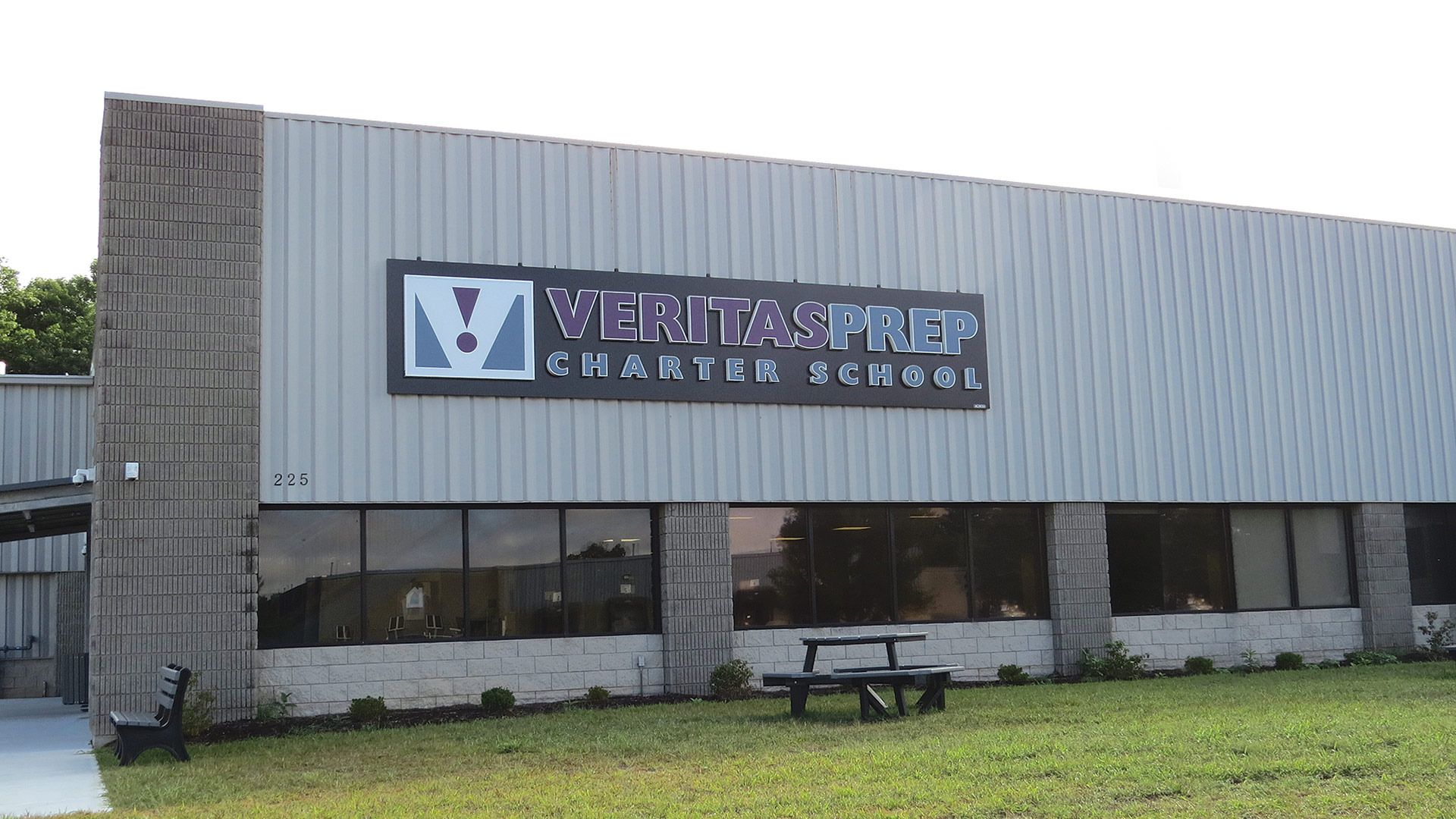 The gym thus represents an example of how a vision became reality, one that officially started with 90 students (many of them being graduates of the Veritas middle school), teachers, and staff gathering on opening day in late August.

The student demographic at the high school essentially mirrors the grade 5-8 enrollment, said Romano, adding that 70% are Latinx and another 20% are Black. Meanwhile, 83% have what she called ‘high needs,’ and 77% are economically challenged.

The plan is to add a grade a year and build enrollment to roughly 400 students by 2025, she said, adding that for Veritas to realize that size and scope (800 students across nine grades) is something she could not have imagined when she first started conceptualizing this concept.

Indeed, to appreciate where Veritas Prep is now, we need to go back to the beginning, and that’s where we find Romano, a frustrated middle-school teacher, looking to find something better for the city and its young students.

Actually, the story starts in New York, where Romano was working in advertising sales in 2001, and the terrorist attacks on 9/11, which essentially left her homeless and heading back to Western Mass. and her parents’ home in South Hadley. She took a job substitute teaching to essentially get out of the house — “my mom kept nagging me about what I was going to do next” — and wound up loving the work.

She applied for a full-time teaching job in Springfield for the following year and wound up at Duggan Middle School, where she worked for six years and experienced what could be called a stern reality check.

“I didn’t have traditional training as an educator, so I came in with the expectations that had been set for me as public-school student myself,” she explained. “And I sort of believed that education was the great equalizer; everyone got a public education, and if you worked hard enough, you could go on to college and do whatever you wanted.

“And when I began teaching in Springfield, I realized that this just wasn’t true for everyone,” she went on. “My eyes were really opened to the inequity that exists in our public education system.”

What stood out to her — and eventually compelled her to start a new charter school — were the expectations for students and the system’s inability to prepare students for success.

“The expectations for students in Springfield were not that high,” she told BusinessWest, adding that this is how and when the seeds were planted for a new charter school.

“I didn’t have traditional training as an educator, so I came in with the expectations that had been set for me as public-school student myself. And I sort of believed that education was the great equalizer; everyone got a public education, and if you worked hard enough, you could go on to college and do whatever you wanted.”

She started by looking at urban settings with similar demographics but different results when it came to student performance and success.

“We went to New Haven and Boston, where we found schools serving similar populations of students and getting very different results,” she said. “These kids were outperforming their neighboring wealthy districts, like kids in East Boston outperforming kids in Wellesley, and we saw the same in New Haven, and we went and looked at those schools and said, ‘wow, what are they doing?’ They were charter schools.”

The schools were different in some ways, but a common denominator was a needed level of autonomy to “actually respond to the needs of the kids in front of them and create the kind of school and systems that could generate different results.”

Fast-forwarding significantly — getting a charter school off the ground is a lengthy, complicated ordeal — Romano set about creating Veritas, a middle school that would “reset the bar,” as she put it, one that borrowed (‘stole’ was the word she used) best practices from high-achieving schools, set high standards for its students, and prepared them for high school.

And, as noted earlier, it wasn’t long before parents and students alike were asking if the same model could be used to create a high school, questions that grew louder as the first classes of Veritas students were graduating and moving on to the city’s schools. 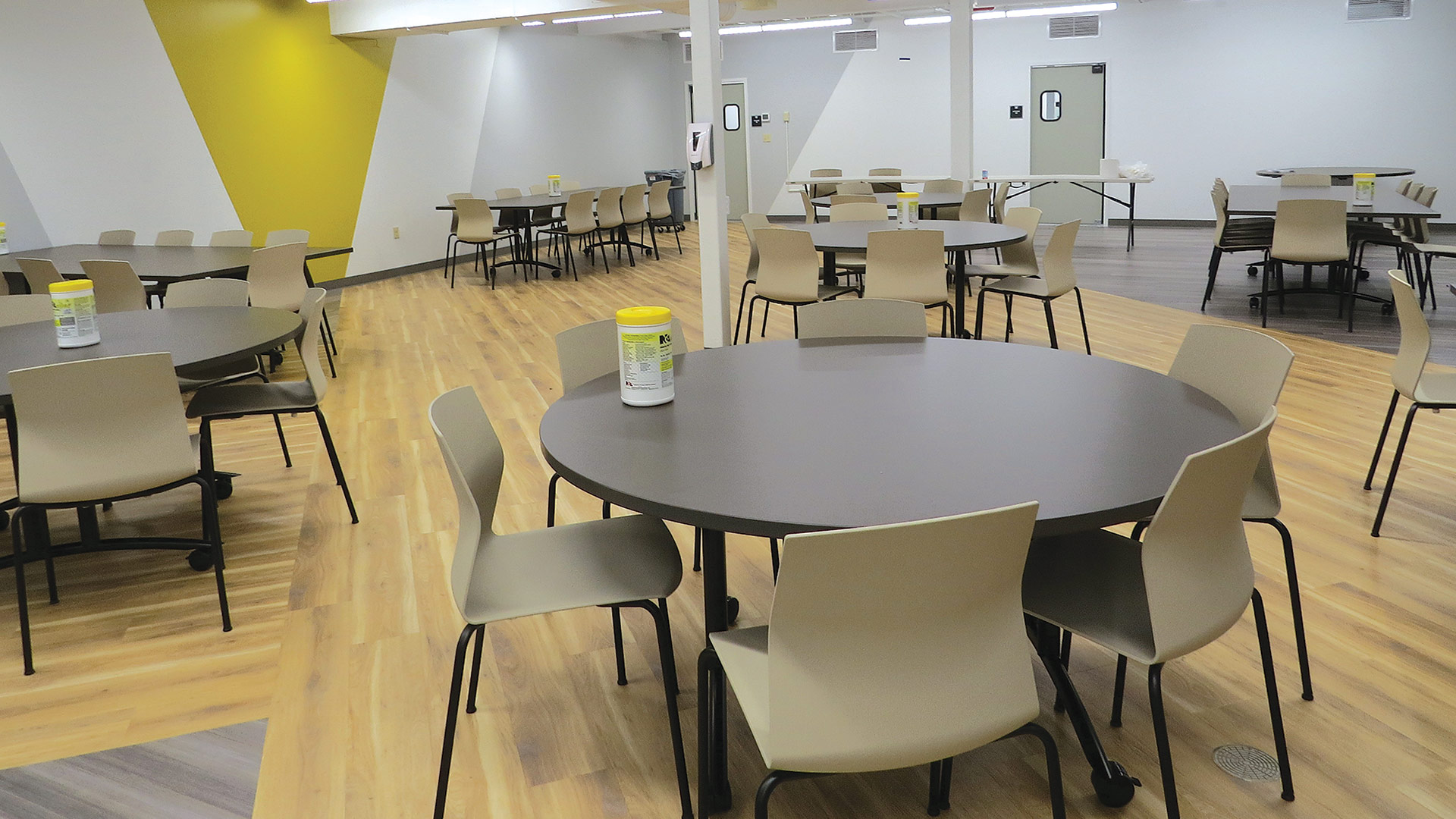 The cafeteria in the new high school is one of the many aspects of the facility that are state-of-the-art.

Eventually, the chorus became too loud to ignore, she went on, adding that she went to the Veritas board of trustees with the concept of a high school, and the ambitious concept was greeted with enthusiasm.

A request for expansion was submitted to the state Department of Education in 2019, and, upon approval, what became a two-year planning process commenced. With that time, a design team comprised of former students (those now in high school or their first year of college), current students, families, teachers, staff members, representatives of area colleges, and community partners put together for a blueprint for a high school.

And by blueprint, she meant not just the actual design of the school — and its gym. Rather, she meant a plan for helping to make sure that graduates of the school would not have doors closed to them.

“We looked at different models, and we looked into what was happening — where is the innovation in high schools now,” she said, putting the accent on ‘we.’ “We focused on what we could do better and what we could do that was different.”

And the chosen model was early college, or EC, as it’s called, she said, adding that it is a somewhat unique model for this region.

“There’s not a lot of it in happening in Massachusetts,” Romano went on. “There’s a lot of talk now in the Legislature and the Department of Education about early college, but there are some great examples in other states.”

Elaborating, she said this is certainly not a new concept — many area school districts have dual enrollment, with students talking college courses while in high school. But this model is different in that it’s “wall to wall” early college and not merely for exceptional students in accelerated programs, as it is in many schools.

“Every student will be able to earn 12 college credits — it’s not for a subset, but for everyone,” she said, adding that, while some might earn as few as 12 credits, some may actually garner two full years of college credits while at Veritas.

“They can literally walk across the stage with a high-school diploma, and an associate degree awarded by Springfield Technical Community College,” she said, adding that STCC and Worcester State University have both signed on partners in the initiative.

“The cool thing about this model is that it really just breaks down the barrier that it’s really tough for a first-generation college student to access college,” she told BusinessWest. “So our kids will actually have a college transcript; they’ll have a track record of success in college when they graduate.”

And, as she noted, having that head start brings advantages on many levels, from a student’s confidence level to the cost of a college education.

“For some of our kids, they may go straight to college, while others will have to go to work, and they’re going to have to finish college at night and on weekends,” she explained. “This just gives them such a leg up because they’re halfway done — they’ve already got it, they’re on a roll, they’ve built some momentum.”

Building needed momentum was just one of the goals for Romano, the Veritas board, and other supporters as they went about conceptualizing the new high school. The overall mission is to eliminate barriers to success, open doors, and provide that leg up that she talked about, and it shows enormous promise for doing all that.

Returning to that question of why and how a high school came to be reality, she said that she and others at the middle school simply didn’t want to let go of their students.

“Many of our students come in not loving school, for whatever reason,” she explained. “School and learning hasn’t been an experience they’ve really enjoyed and felt that they’re really good at; we’ve kind of turned that around for them in the middle grades. By eighth grade, they’re really invested in their education.”

And now, they can continue investing at another important level.