Many Workplaces Are Opting for More Casual Dress Codes 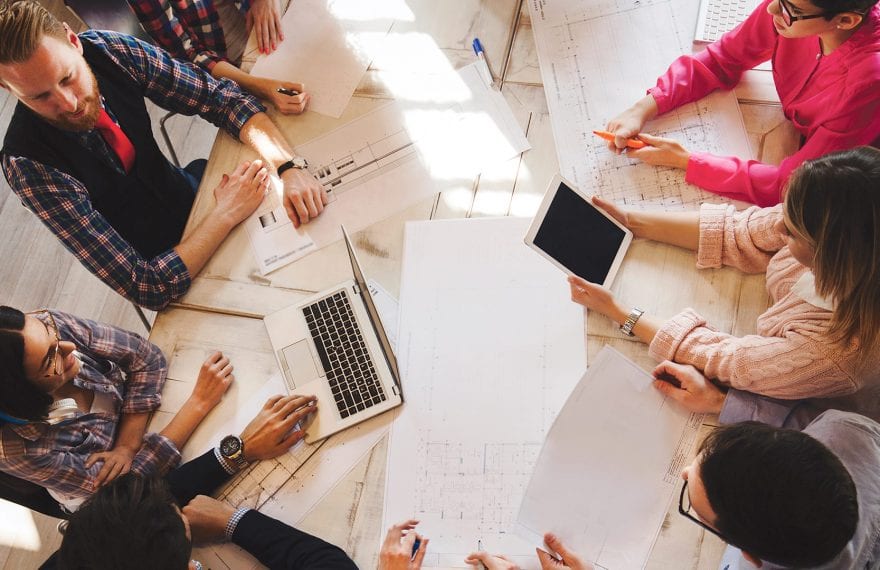 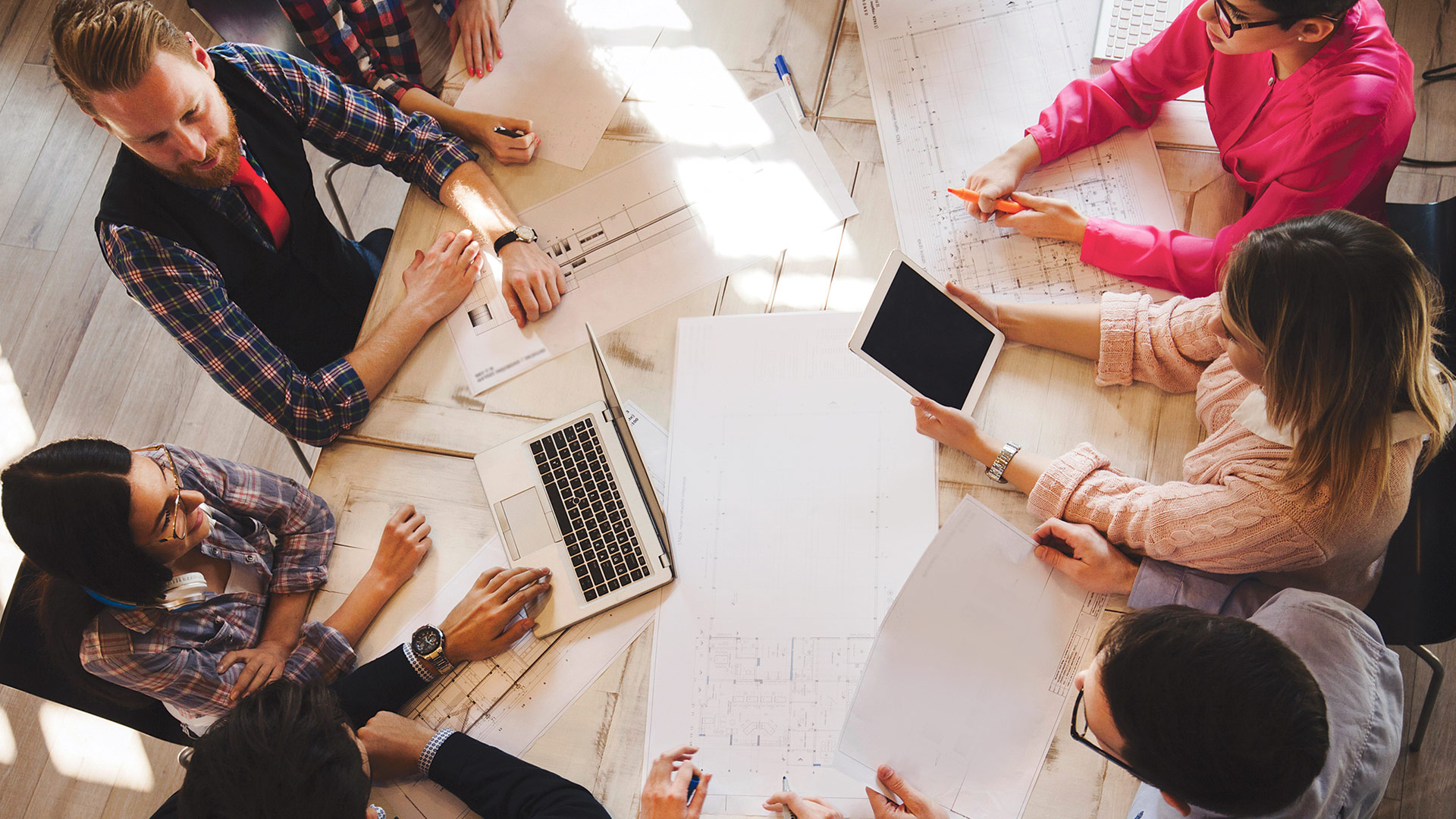 For decades, dress codes in business environments were simple — suits or jackets, ties, dresses, nylons. But there’s been a shift in recent years, at companies both large and small, toward a more casual dress policy that projects professionalism through slightly more casual wear, a trend often summed up in the phrase ‘dress appropriately.’ The result, proponents say, are more comfortable — and, hence, happier — workers, which is something any company wants.

It was only supposed to be a summer-long experiment, Christine Phillips said.

“Up until the summer of 2016, it was pretty much shirts, suits, and ties for men, and dresses, jackets, and nylons for women,” said Phillips, first vice president of Human Resources at PeoplesBank, of her company’s dress code. “The expectation was a very professional dress environment. But in some of our employee surveys, the concept of a more casual dress code kept coming up.”

There was some precedent, even in the traditionally buttoned-up world of finance; that was the year JPMorgan Chase made waves on Wall Street by making ‘business casual’ its official dress code. Other large corporations have done the same, following the lead of Silicon Valley and the tech sector, which have long been known for more casual dress.

So, PeoplesBank leaders decided on a half-measure — loosening the policy for one summer.

“We took it down a notch — guys didn’t have to wear ties, women didn’t have to wear nylons. We relaxed on some of the more professional aspects — instead of a jacket and tie, just a dress shirt was fine; even a golf shirt was OK. For women, it could be more summer dresses, or open-toed shoes. In a way, we listened to what employees were asking us to consider and decided to use the summer as a test to see how things went.”

The result? “It went really well. People were excited about the fact that they could take the dress code down a little.”

That wasn’t too surprising, Phillips said. Loosening dress codes has been a hot topic for a long time at HR roundtables she’s attended, and other banks have waded into that water. At the start of 2017, PeoplesBank made it permanent as well, writing a less formal dress code — the bank calls it ‘professional casual’ — into policy year-round.

“We approached this as a workplace benefit,” she told BusinessWest. “When people feel more comfortable in their work environment, when they can reflect their personality more, they feel good about themselves and feel good about their workplace. It’s been extremely well-received by all our associates.”

MassMutual arrived at the point slightly earlier. After years of publishing a policy of specific do’s and don’ts, in the spring of 2015, the corporation boiled its dress code down to two words that have often been used in today’s work world: ‘dress appropriately.’

“This was an effort to reflect the more collaborative, innovative, and open culture that was building at the company, as well as simply trusting our employees and providing them with more empowerment and accountability,” said Susan Cicco, MassMutual’s head of Human Resources & Employee Experience. 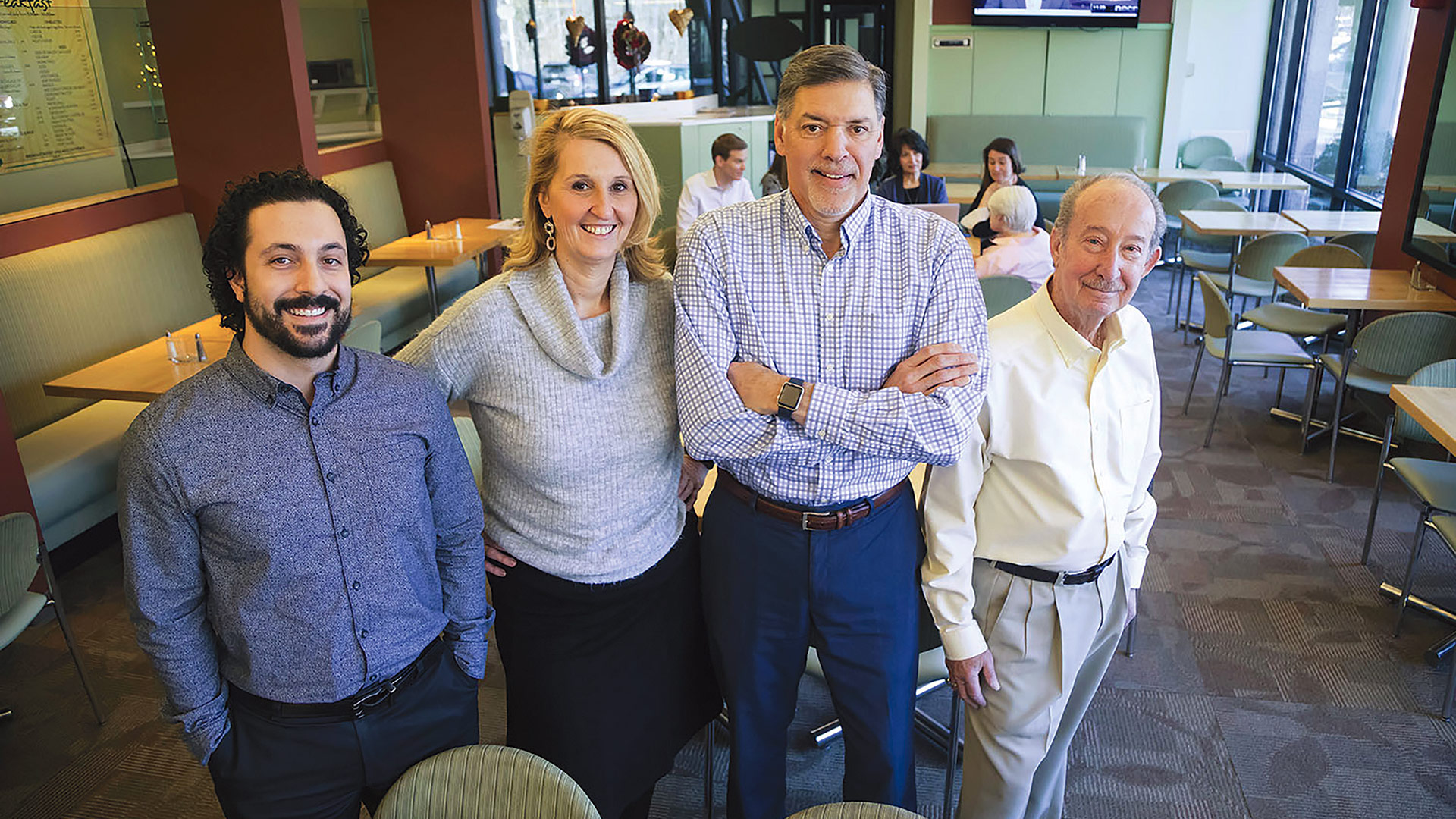 “What someone wears is very personal, and we want all of our employees to be comfortable and to bring their whole selves to work,” she explained. “We also want employees to have the flexibility to express their own individuality while trusting them to exercise good judgment.”

While the way employees are expected to dress often depends on what they’re doing that day — a client meeting for instance, might require a more formal look than an afternoon behind a desk — both companies are simply reflecting a broader move in the work world away from suits, ties, and dresses. The reasons are myriad, but they all come back to employee satisfaction, and how that affects the entire workplace culture in a positive way.

Once an employer shakes free of the idea that looking good always means formal dress, it can be freeing to simply trust that workers will make the right decisions with what they wear, Cicco said.

“It’s about placing more trust and accountability in our employees to manage their personal brand and reputation, and in our managers to set expectations and provide guidance for what’s considered appropriate,” she told BusinessWest. “It’s made a notable difference — life just feels a little bit easier.”

Still, for professionals accustomed to formal dress, the new guidelines can complicate matters, too, said Will Brideau, owner of menswear store Jackson & Connor in Northampton.

“What someone wears is very personal, and we want all of our employees to be comfortable and to bring their whole selves to work. We also want employees to have the flexibility to express their own individuality while trusting them to exercise good judgment.”

“We’ve seen people coming in saying, ‘I don’t have to wear a tie to work anymore; the office is really dressing down lately. They’re saying I don’t need a sport coat, just a nice button-down shirt, just dress appropriately for clients. How do I put an outfit together?’” he explained. “To a large extent, a suit and tie is a uniform, but now there’s a lot more flexibility, where they need to put together a semi-casual outfit — a business-appropriate outfit that feels good and looks good.”

While matching dress pants or a suit with a dress shirt might have come easy, he went on, exploring a wider range of “middle-of-the-road pants” — not too dressy, but not too casual — can be trickier for some.

“People are playing around and have a lot more options, and that absolutely requires more from us in terms of directing people to find outfits that will really split the difference and present them as being professional, but not overdone,” he said. “It’s interesting for us watching all of that change, seeing people shift into a more casual workplace style, based on who they’re interacting with on a daily basis.”

Frankly, Brideau went on, he enjoys the challenge of helping customers craft outfits by pulling together separate items — a shirt, dress pants, maybe a vest — they may struggle to assemble themselves after years in suits and ties. 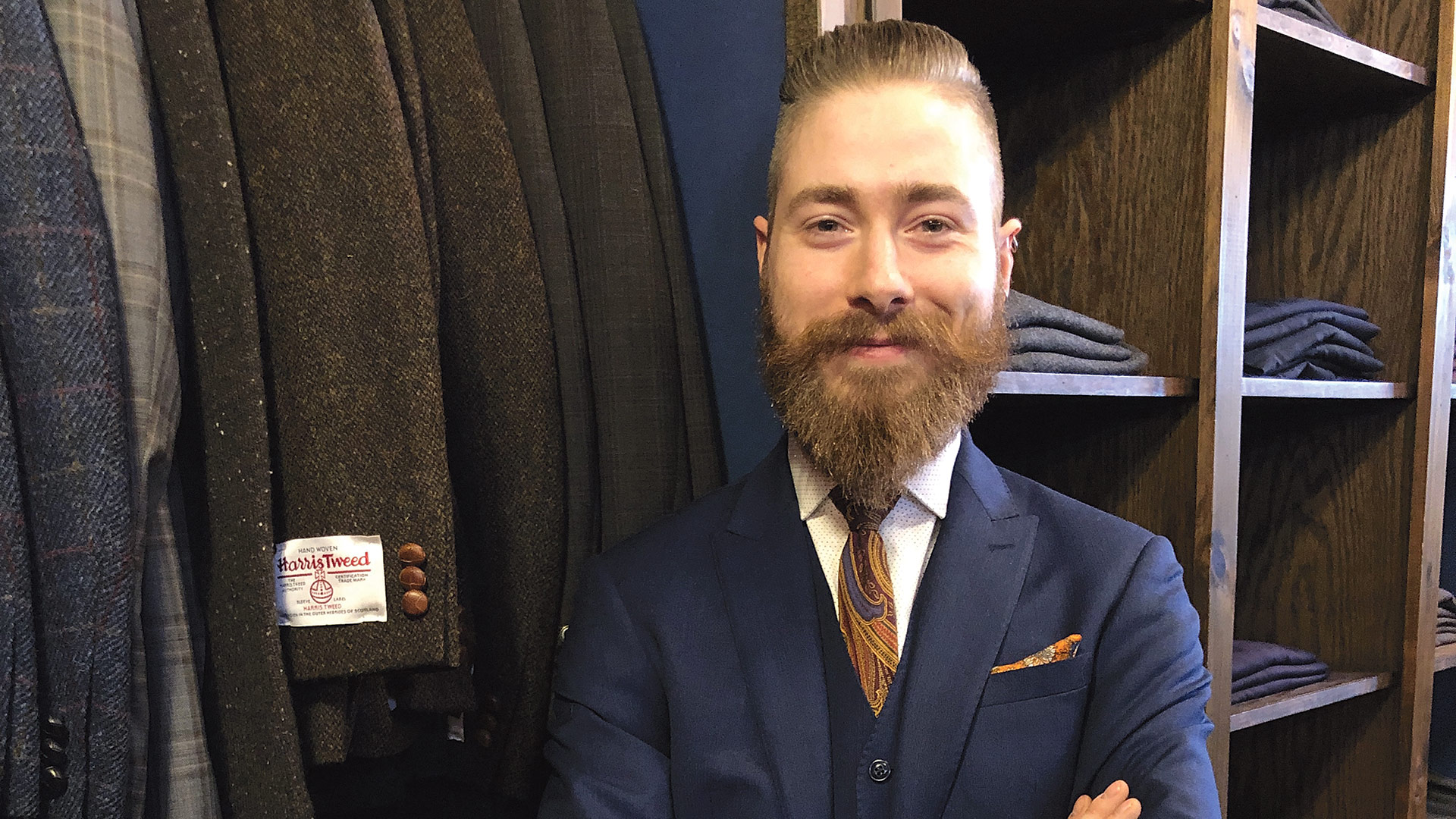 Will Brideau says he enjoys helping men who are used to suits and ties assemble more casual outfits for work.

“We’re doing more piecing together of separate items to make a creative presentation, which is fun for us. We love doing that stuff,” he said. “And it gives guys more range for creativity and to be playful with the things they’re wearing.”

“One thing that was important to us — and we talked about this before we did it — was that, in dealing with our customers, our communities, even each other, there’s an expectation of how we should look, and we have to maintain that. It doesn’t mean we have to stay in suits and ties, but we still have to respect the institution maintain a level of professionalism, even though it’s a little more casual.”

There are a few garments that are still off-limits at the bank, however, from tight-fitting clothing to jeans and T-shirt.

Cicco noted that MassMutual’s dress code is just one of a number of ways the company continues to evolve its overall culture.  Other areas of focus include a stronger commitment to diversity and inclusion, modernizing its benefits and leave policies, having a continuous improvement and learning mindset, and realizing small things are big things. The dress code falls firmly into that latter category. 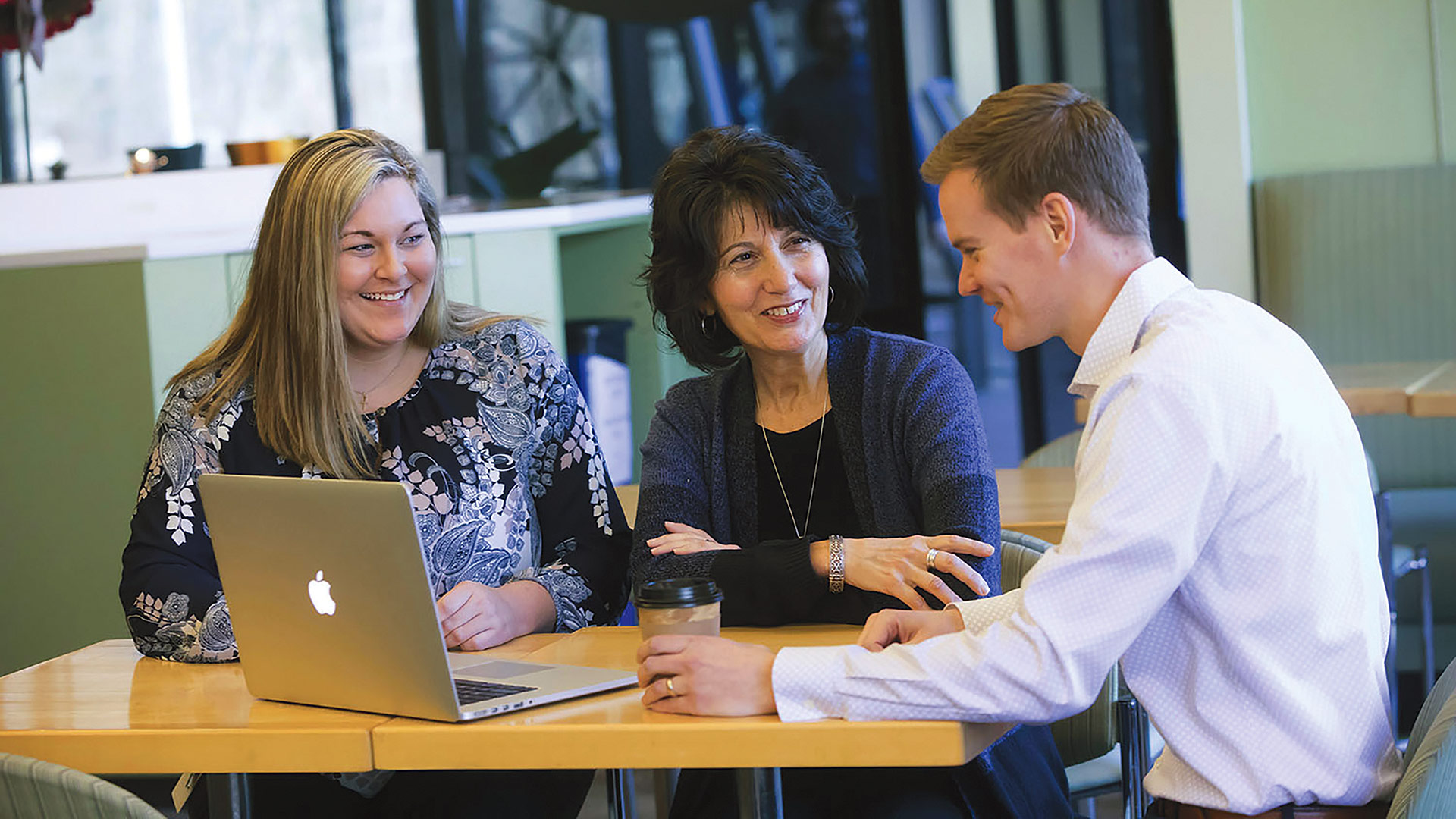 “When this new policy was introduced, our guidance to employees was simply to consider their daily schedule, who they were meeting with, and what was appropriate. That’s it,” she explained. “We also generally suggest to our employees that, if there’s any doubt, don’t wear it. This has worked out really well. As you walk the halls of MassMutual on a typical day, you can feel the more relaxed atmosphere.”

Oddly enough, Brideau said, he’s still selling plenty of suits and ties; in fact, neckties were his number-three seller by category in 2018, up from number four in 2017. He has an idea why: there will always be a need for formal wear, even if it’s on the decline in the workplace.

“We’re selling more neckties, more bowties, more dress pants,” he said. “I think, perhaps, because they’re not as necessary for work, when you need them, you really need them. More people are saying, ‘I never wear suits for work, and now I have to go to a wedding, or a memorial service comes up suddenly, and it gives them an opportunity to get a suit. You never need a suit until you need a suit.”

Increasingly, companies are saying they don’t need suits, or dresses, or any staples of the traditional, formal dress codes of decades past. Phillips says that’s a positive thing.

“I would encourage companies, if they’re thinking about doing this, to have good communication with their associates about it. We said, ‘we hear you, we know this is a benefit to you, and if we’re able to offer this to you, we have expectations how you’ll respect the policy and follow it.’ And now, it’s so rare we have concerns about the dress code.”

While some may point to loosening dress codes as a Millennial-driven trend, she added, workers of all generations seem to appreciate it.

“People who have grown up in banking, and all they’ve known is a professional look, they’re excited the bank could accommodate a look of professionalism but not require them to wear a suit and tie every day,” she said. “They’re able to project professionalism in a slightly more casual dress code.

“People were so excited we were doing it for the summer — that was just a ‘wow’ moment — then when we announced we could move to a year-round policy of professional casual, that really excited people,” she went on. “It also sends a message of trust; instead of saying, ‘it’s always been this way,’ we listened, and we felt this was something we can accommodate in our work environment.”