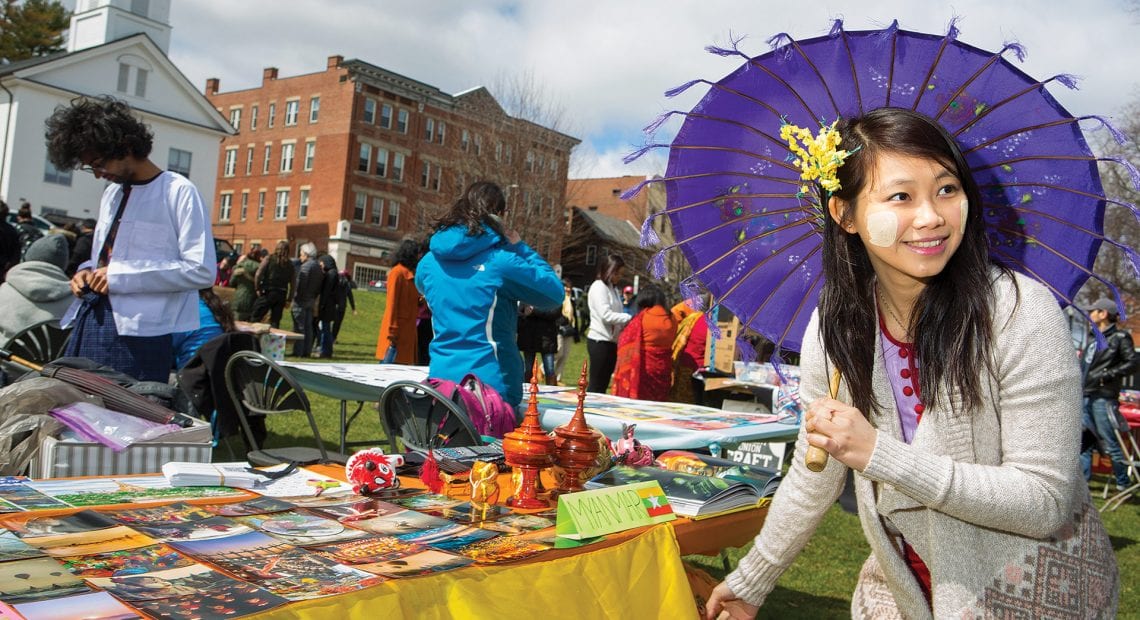 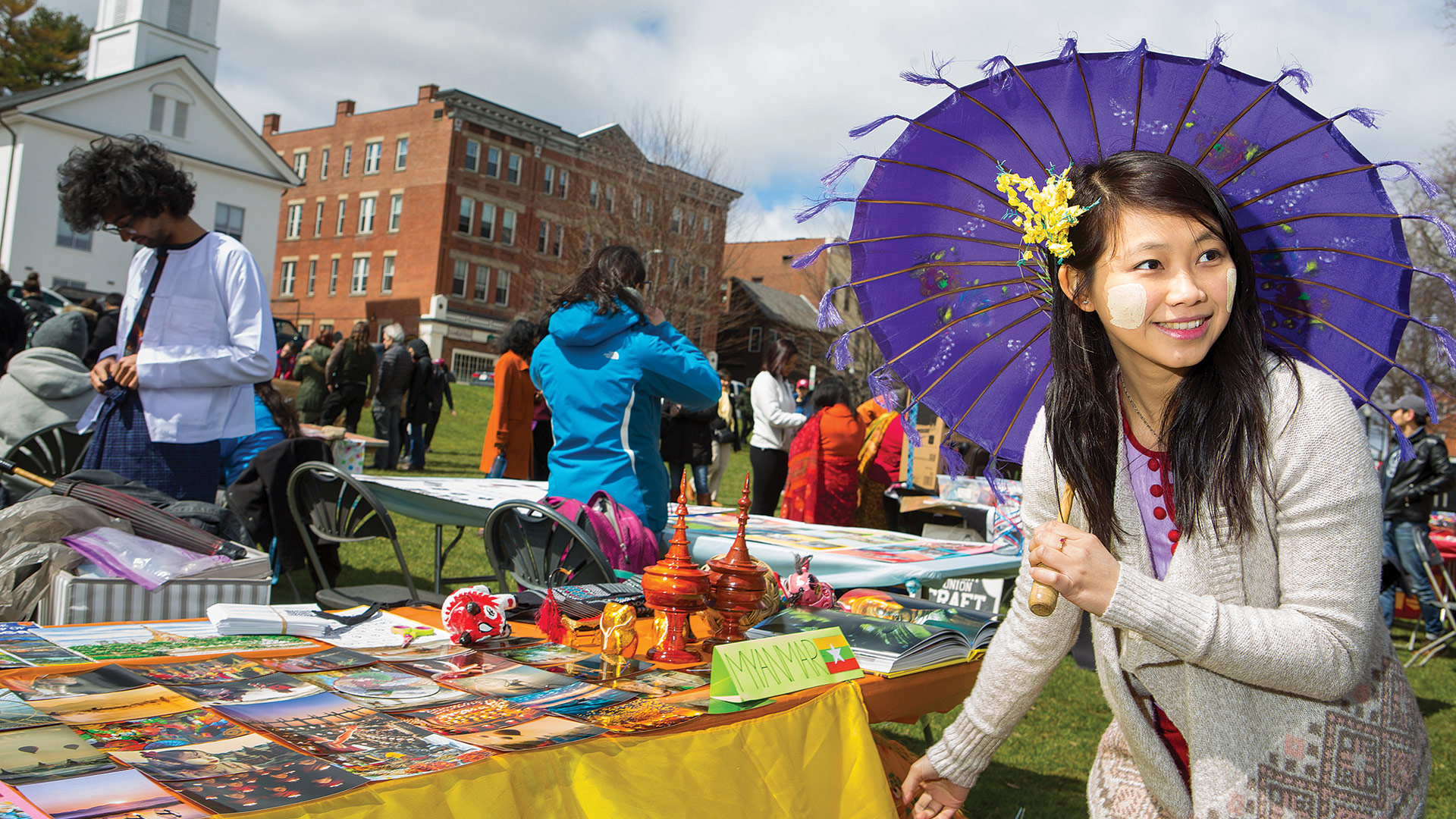 Students at UMass Amherst participate in the 2017 International Festival.

International students can add a lot to a university or college. They bring diversity when it comes to cultural traditions, and they give domestic students a chance to experience global perspectives. However, it is not always easy to be an international student at a U.S. institution. The process to get in can be very difficult, tuition is expensive, and a rocky political climate makes the decision to go to a different country for school even more unsettling. But colleges and universities in the area are taking steps to make international students feel at home.

Imagine moving to a new country where you don’t know anyone and don’t speak the predominant language.

This is the reality for international students who travel to the U.S. to further their education. But local institutions in Western Mass. are well aware of this and have implemented several new strategies to make these students feel more at home.

The 2019 Open Doors Report on International Education released by the Institute of International Education and the U.S. State Department’s Bureau of Educational and Cultural Affairs notes that the total number of international students enrolled in U.S. colleges fell by 2.1% from 2017 to 2018, and continues to drop. This national decline is being attributed to many factors, including student visa delays and denials, the steep price of U.S. higher education, and a rocky political climate.

However, a few institutions in Western Mass. are bucking this trend and continue to accept a consistent number of international students. In some cases, the numbers are even increasing.

While dedicating resources, staff members, and lots of time toward specifically reaching out to international students may not have been on the radar for institutions 10 or 15 years ago, the benefits of bringing these students to campus has become clearer for schools, several of which have adopted strategies for recruiting international students. Some even have positions dedicated to just this effort.

“It’s only been about 10 years that we’ve been really putting our mind to it,” said Kregg Strehorn, assistant provost for Enrollment Management of Undergraduate International Admissions at UMass Amherst.

But putting forth such an effort can’t happen all at once; it requires thoughtfulness, a solid plan, and a team willing to put in the work to make sure these students not only enroll in the university, but thrive there.

“One thing when we began to recruit international students was to make sure that we had a slow-growth model,” said Strehorn, adding that they didn’t just open up the doors and welcome any qualified international student because they wanted to increase the numbers. “We were very planful, very guided. That included me being in constant contact with our campus partners.”

Michelle Kowalsky Goodfellow, executive director of Undergraduate Admissions at WNEU, said a big part of the process is making the students feel welcome, just like they do for any domestic student as well.

“We really try, as we do for any student here, to get them involved in other clubs and organizations and get them to a place where they can make some connections with other friends and not just treat them as, ‘oh, they’re the international students,’” she said. “We want them to have the full experience like any other student.”

Despite a tense political climate and some difficult circumstances, these two universities, among many others, have implemented specific plans to give international students a great experience from start to finish — and those efforts are bearing fruit.

Strehorn summoned a phrase — “the farther you get away from home, the more you understand home” — to explain how he approached learning about the international student market.

So much so, in fact, that he moved to China with his family for four months to get to the bottom of it.

“China was the first market that we really drilled down and tried to understand how we would compete in that market,” he told BusinessWest, adding that UMass Amherst was already receiving a solid flow of applications from China before implementing specific outreach strategies. 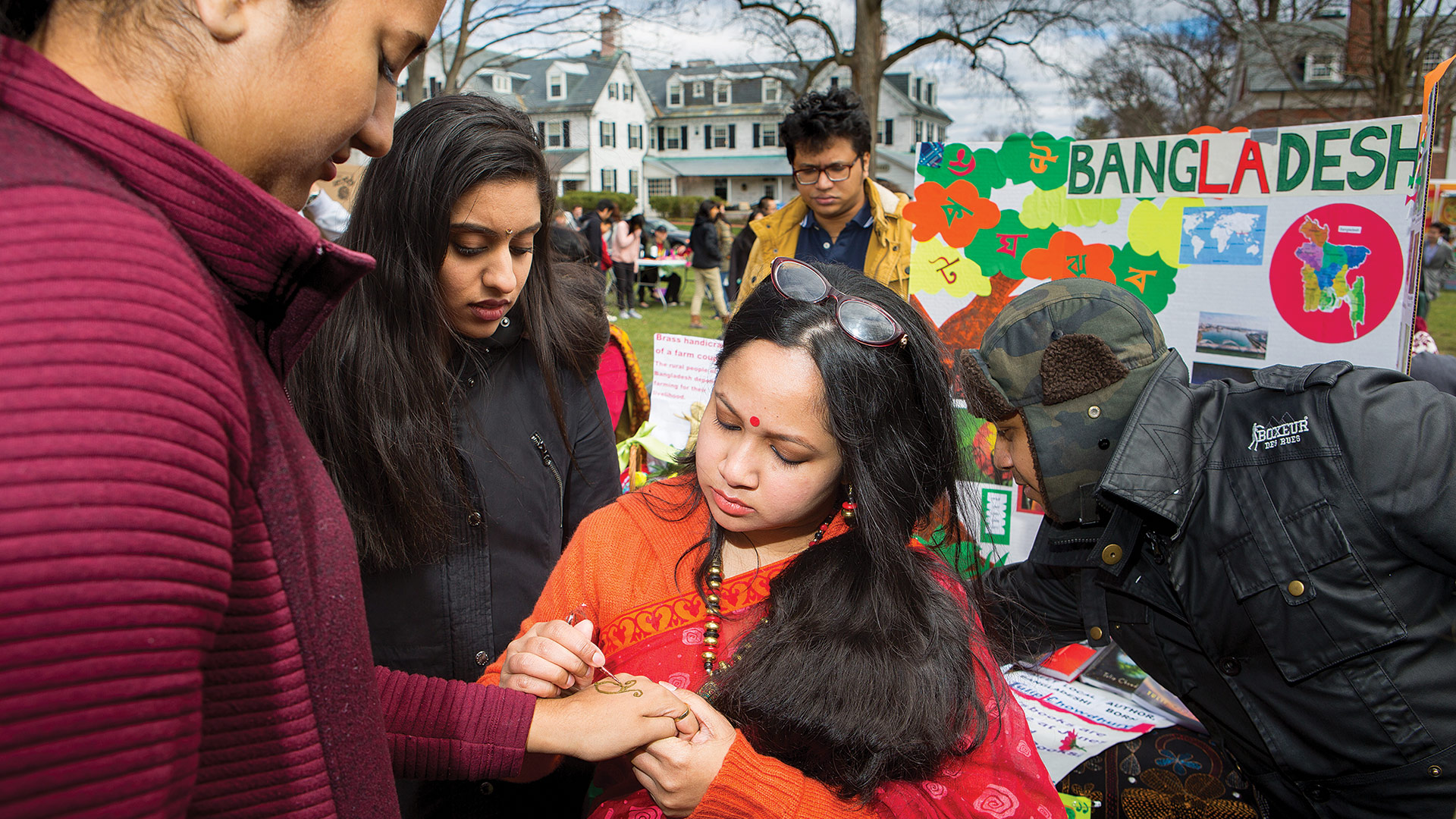 UMass and other institutions have honed strategies for not only attracting international students, but creating a welcoming environment for them.

Living there, he added, helped him understand the intricacies of the market and helped him develop a strategy to move forward.

According to a fact sheet from the Office of Institutional Research at UMass, the number of entering first-year international students has grown continuously over the past decade, from 54 in the fall of 2010 to 444 last fall.

“From that slow-growth model, we can meet and decide, how many more students can we add for the following year?” Strehorn said.

WNEU has had similar experiences, and Goodfellow says the university accepts around 50 new international students each fall at the undergraduate and graduate levels.

One of the ways UMass and WNEU have been able to retain these students is by cultivating an open and welcoming environment. Goodfellow noted that, despite the negative perception the media may portray regarding the U.S. and its relationship with international visitors in general, most are able to recognize that they will be coming to a safe space.

Massachusetts also leans toward the more progressive side — another talking point for international students and their families.

“I tend to articulate that and say, ‘you would be coming to a place that’s a lot more open to diversity and people with different backgrounds,’” she said. “That’s kind of a big part of a university in general — the inclusion and feeling of acceptance of all people.”

Strehorn added that creating a welcoming environment from start to finish is a big part of recruiting and retaining international students. When they are admitted, the first department they hear from on campus is International Programs, where they receive help with their I-20 document and visa to enter the country, as well as assistance with how to travel to the U.S., where to land, and how to get to campus. 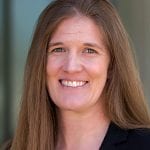 “We really try, as we do for any student here, to get them involved in other clubs and organizations and get them to a place where they can make some connections with other friends.”

“It’s really that welcoming spirit that then carries through,” he said. “Not only have they had a good experience through the admissions process, that first handoff over to International Programs is quite smooth and friendly.”

Strehorn said the somewhat tumultuous political climate in the U.S. is a common topic for international students and their families. He added that these families frequently see Americans on the news being less than welcoming of people from other countries, and that can be a valid concern.

“We hear from students and families constantly about the political atmosphere in the United States, whether they will be safe,” he went on. “We are consistently asked about the president and his policies. I think people are doing their due diligence when they’re sending their children here, wondering, are they still going to get a good education at a fair price? And are they going to be safe and welcomed?”

A more recent concern is the spread of the coronavirus, which continues to wreak havoc in China. As a result, UMass has decided to suspend its spring 2020 program to China, affecting seven students. However, the university has not yet made any changes to recruiting Chinese international students. Like everyone else, Strehorn noted, they are waiting for more information before making any big decisions.

“Right now, we are moving business ahead as usual,” he said, adding that they have reached out to several contacts at universities in the U.S. as well as overseas. “We’re hoping to support people from China as always, and we’re hoping this doesn’t turn out to be as devastating as it has the potential to be.”

Home Away from Home

Despite these challenges, there are certainly benefits to bringing international students to an American campus. The first, Goodfellow says, is the diversity factor.

“It allows both our domestic students to interact with folks from all over the world, as well as for those students that are coming from abroad to get a perspective of a U.S. student,” she said.

Another reason is the economic impact international students have on universities and the areas surrounding them.

International students are not eligible to receive federal financial aid, meaning most students, aside from merit-based scholarships like the #YouAreWelcomeHere scholarship at WNEU, are paying full price to attend these universities, boosting revenues for schools and the areas around them.

To put a specific number on that impact, according to the Assoc. of International Educators, international students studying at U.S. colleges and universities contribute $39 billion to the U.S. national economy and support more than 400,000 jobs.

Strehorn added that UMass likes to call itself a “global community,” and it can’t be that without representation from the globe.

“Having folks from all different countries is imperative,” he said. “Domestic students can benefit tremendously from being in classes, discussions, clubs, and social events with students from other countries. I think all of that has formed kind of a home away from home for these students.” 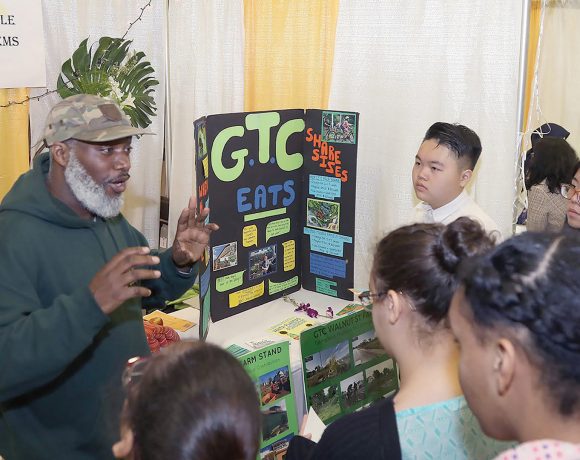 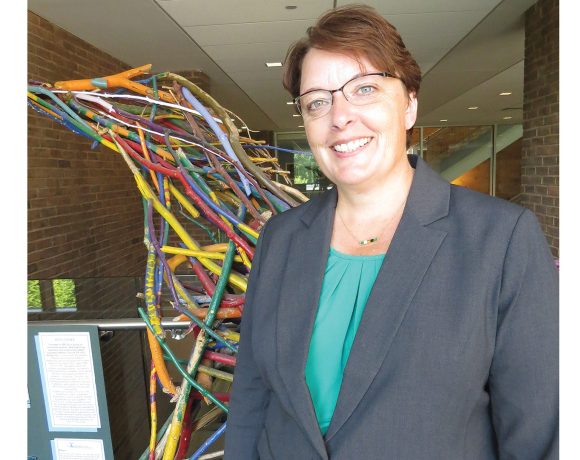 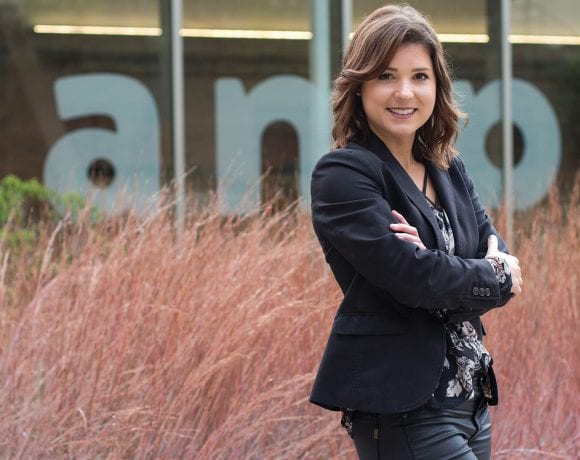