It’s been a long, very painful year for all those who love the Student Prince and the Fort restaurant in Springfield. 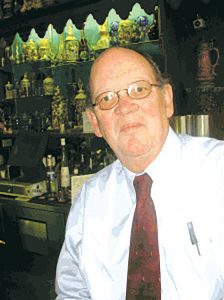 First, Andy Yee, who acquired the landmark along with several other investors in 2014, passed away in late May after a lengthy battle with cancer. Then on Monday, Rudi Scherff, who was owner and host at the establishment for decades, died after his own lengthy battle against the disease.

If Yee will be remembered as one of those who saved the Fort, as it was known, amid trying financial times nearly a decade ago, Scherff will always be remembered as the face of the restaurant. Only, it was more than a restaurant. Much, much more. It was a gathering place, not only for workers downtown, but residents of communities across the region. It was a place to celebrate milestones — birthdays, wedding anniversaries, family reunions — and especially holidays. Spending part of the Wednesday afternoon before Thanksgiving at the Fort was a tradition. It was the same on Christmas Eve, and all through the holiday season

And Rudi — he was one of those people who needed only a first name — was a huge part of it.

He set the tone. He created the atmosphere. And he gave every single person he touched a story to tell. Usually, many of them. He was a pretty good businessman, but he was a much better ambassador for Springfield and its downtown, always advocating for the city and acting as a cheerleader when one was needed.

His family ran the restaurant, but he was synonymous with it, becoming an almost larger-than-life figure in the process. And while he sold the restaurant to Yee, Picknelly, and other partners in 2014, he remained a fixture there, right up until last week, when he returned to the Fort to lead others in a final singing of “Silent Night.”

There’s an oil painting of Rudi hanging in the restaurant’s Heidelberg Room, and the bar area is now named after him. We have those things to remember him by. But really, we don’t need them.

We have the stories. We have the memories. And that’s more than enough.

He will certainly be missed.

Bradley Users Advised to Plan Ahead and Allow Extra Time