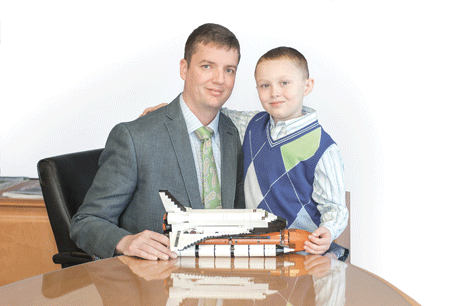 “I was in school and working a summer job cleaning air ducts,” he recalled. “The last job I worked was at the end of August; I was in New York City for a few days, working in the World Trade Center.”

Two weeks later, those towers were gone, America was shaken, and McMahon was reflective.

“I felt there was more that I could do. So, with some other guys at school, I joined the Air Force,” he said. “But there was a rush to get into the Air Force at that time, and it was hard to pick your job. I wanted to go be a fireman or an aerial gunner or something cool on the front lines, but I went in saying, ‘whatever you can give me.’”

Because of his accounting and business education, he was placed in a finance position — not exactly what he’d envisioned. But it turned out to be a good fit, and he managed, among other things, the finances of a special-operations unit — certainly a critical role.

Years later, working at Fort Bragg, McMahon and his wife had a son and wanted to return to their Western Mass. roots, where they both had extended families. So he became a reservist in the Air National Guard and took a job at Kollmorgen in Northampton, as a financial analyst working on defense contracts.

Three years later, he was hired by the VA Medical Center in Leeds, “which was more in line with all my training and would allow me to serve veterans in that capacity.” Veterans were close to his heart, especially because his brother — who did, in fact, end up with a ‘cool’ Air Force job, as a paratrooper — came home with a Purple Heart.

At the VA, McMahon manages close to $170 million in taxpayer funds. He has spearheaded efforts to centralize data, rebalance workloads, and automate processes, building the leanest fiscal department among all six VA medical centers in New England, and mentoring other managers in the organization to transform their service lines as well.

“I have a finance job, which I happen to be technically good at,” he said, “but I enjoy the fact that I’m still contributing to veterans, guys that served.”