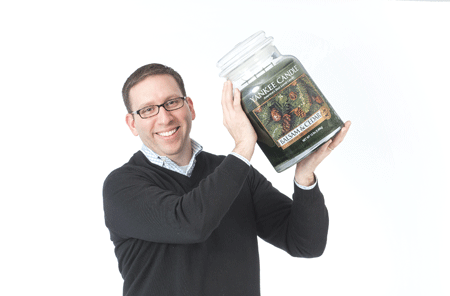 Geoff Medeiros says he’s not the one who comes up with the scents for Yankee Candle, such as the one that recreates the aroma of sizzling bacon — one of the so-called ‘man candles.’ No, there’s a committee of five or six devoted to that. Nor does he come up with the names for these products, such as ‘Luau Party,’ one of the offerings in the Exotic Escapes collection; there’s another team that handles that assignment.

But you might say that it’s his job, as vice president of Brand, to position these products, myriad others, and the stores that sell them for success.

That’s a simple way to break down a rather long and quite deep job description, one that includes everything from brand positioning to media planning to global consumer research. It was his decision, for example, to use the company’s highly visible billboard on I-91 to promote the scent called MMM, Bacon! “It definitely drew some PR for the company,” he said with a laugh.

Overall, Medeiros manages a number of brands for the company. Beyond the Yankee Candle label, there is the Home Classics brand sold at Target; the Simply Home brand, sold in Kohl’s outlets; and new offerings including Pure Radiance and Relaxing Rituals, both sold in the company’s retail stores.

Medeiros, who leads an 11-member Brand team, has honed his skills in a 15-year career in brand management, one that also included stints with Hasbro and Nestlé. He joined Yankee Candle in 2006, working first as director of Brand Management and then general manager before assuming his current position.

At all those stops, and especially with Yankee Candle, he has balanced his professional career with a passion to give back to the community. A Big Brother while attending Providence College, he currently sits on the board of Big Brothers Big Sisters of Hampden County, and was instrumental in helping the agency increase its social-media presence for the 2013 Valley Gives event. Meanwhile, he has been an active member of the Mentor Program at Yankee Candle, which was established to create an environment that develops and advances talented young women at the company.