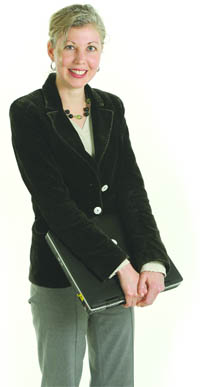 As she talks about all that’s going on in her life, professionally and within the community, and her efforts to squeeze it all in, Audrey Manring uses words and phrases that give new meaning to the saying about time being money.

“You scrimp and you save,” she said, describing her efforts to make maximum use of the 24 hours in a day. “Maybe you cut back on sleep … you do whatever you can just to make the time.”

This tall order got considerably taller a year ago, when Manring was named editor of The Women’s Times, a publication with a mission that suits her professionally and personally.

“It’s a nice marriage of what’s interesting to me intellectually and the kind of work I feel is important: amplifying women’s voices, telling their stories, and looking at issues of concern regionally and nationally, but from a very locally grounded perspective,” said Manring, who had several interesting stops before returning to the Berkshires in 2002.

After graduate school (at the University of Scotland), she was a freelance writer, with bylined articles in Information Week, among other publications. Before that, she was a research and writing assistant for the New York Times bestseller Flyboys.

In her current capacity, Manring wears many hats. She does some writing and art direction, considerable editing, and work done in collaboration with Publisher Eugenie Sills to brand the publication, shape its editorial philosophy, and make it more visible across Western Mass.

While doing all this, she finds time for a long and intriguing list of community work. She was, for example, co-founding director of the PapaInk Children’s Art Archive, which has collected and archived roughly 30,000 pieces from around the world. Manring is also a mentor with the South Berkshire Youth Coalition Mentoring Program, which serves high school students at risk; sits on both the steering and marketing committees for Voices from the Inside, a literary arts program for incarcerated women; and is a volunteer with Construct Inc., an agency working with housing and homelessness issues in Great Barrington.

When asked about future career goals and aspirations, Manring said she considers herself a writer first and foremost, one who would like to freelance for some national publications and someday pen her own novel. To do that, she knows she’ll need to really scrimp when it comes to her time.