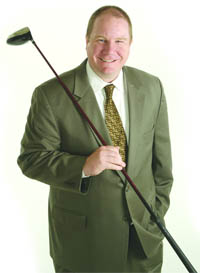 While playing baseball at Holy Cross, Daniel Morrill saw his friends keeping busy by helping needy children. He recalls being both jealous and inspired.

“I played baseball for four years there, which didn’t allow me any time to do community service,” he said. “A lot of my friends were involved in a program where they met with underprivileged kids in Worcester once a week, and one of my friends had a little brother through the Big Brothers Big Sisters program. I wanted to do that, too.”

Morrill eventually did get involved, so effectively that he was named the Hampden County Big Brother of the Year in 2004. That’s typical of Morrill, who has made a habit of swinging for the fences in both his work and the community. Even as the Forty Under 40 goes to press, he’s on the move at Wolf & Co., the Springfield-based CPA and consulting firm. Before this year, he had worked as a senior audit manager, handling the audits of more than 125 clients throughout the year, including large, multi-state, publicly held bank holding companies.

“I’m in the midst of an exciting transition right now, moving into professional practice as a senior manager,” he said, a position that includes both in-house training and overseeing in-house consulting with other partners and managers on technical issues.

It’s a career he relishes, although he freely admits that he was drawn into the Economics and Accounting programs at Holy Cross partly by the fact that graduates of the program usually had no problem finding work after college. “It wasn’t difficult getting a job coming out, and when you’re 18, that’s appealing,” he said.

Getting a job is one thing, but moving quickly up the ladder is another. Still, Morrill is no longer letting work or play (golf) get in the way of serving the community, whether through an annual bowl-a-thon that draws some 50 participants from Wolf & Co. or working with Big Brothers Big Sisters, where he has served on the board of directors for several years.

“I realized the impact you could make on a young person’s life,” he said of his experience there. And making an impact, both on the job and away from it, is what the Forty Under 40 is all about.