Can Dogs Sniff Out Cancer? Some Studies Suggest They Can

Wiggins the poodle was an ideal sleeping companion, said Suzanne St. Germain — at 10 pounds, he didn’t take up too much space on the bed.

“Most of the time,” said the Ludlow resident, “he would sleep right up against me and not really move much.”

That’s why it was odd when Wiggins began to fuss and toss one night in early 2006, unable to fall into his usual peaceful slumber.

“I was lying on my left side, and he walked right up and stepped on my left breast,” St. Germain said. “I was quite shocked, and it was very painful. Eventually he lied down against me and calmed down.”

She experienced breast pain the next day, but figured it was a bruise from where Wiggins had stepped on her. Then, two days later, he did the same thing in bed — and it made her think.

“In the shower the next morning, I felt my breast and was not sure, but I knew something didn’t feel right,” she said. The following week, she scheduled a mammogram. The diagnosis, as it turned out, was breast cancer.

“As soon as I found out, I talked to Wiggins and told him what a good job he did, and from that day on he never stepped on me again,” St. Germain said. “Wiggins was much calmer, and I feel he knew everything from here on out was going to be okay.”

St. Germain’s story is not an isolated incident. Increasingly, people are reporting a sixth sense in their dogs when it comes to detecting cancer — a phenomenon that intrigues doctors and scientists, although there’s little in the way of solid research to back up the claims.

“There’s some interest in it, in that animals have been shown anecdotally to identify an organ that has cancer — predominantly dogs and breast cancer,” said Dr. Wilson Mertens, head of the D’Amour Center for Cancer Care in Springfield. “Subsequent studies show that, with minor training, some are able to identify a cancer patient by sniffing their breasts.”

Still, Mertens said the phenomenon has not received enough study to be considered a breakthrough in cancer detection — yet.

“I don’t think, from a medical point of view, that this has a lot of relevance right now,” he said. “I don’t think you’ll see cancer-sniffing dogs in cancer treatment areas like you see bomb-sniffing dogs — the accuracy doesn’t seem to be what’s required.”

It’s hard to deny, however, that some dogs have shown to be man’s — and woman’s — best friend in some very odd ways when it comes to cancer.

Studies are ongoing in different parts of the country on how effective dogs are at detecting certain cancers.

In one case, reported in the journal Integrative Cancer Therapies, a team of California researchers acted on the theory that dogs can sniff out traces of chemicals like alkalines and benzene derivatives in the breath of people with cancer. They trained three Labrador retrievers and two Portuguese water dogs using breath samples that had been exhaled into tubes by cancer patients.

The test involved new samples taken from 55 lung cancer patients, 31 breast cancer patients, and 83 healthy volunteers. The dogs correctly detected 99% of the lung cancer samples and misidentified just one of the healthy controls. Meanwhile, they correctly identified 88% of the positive breast cancer samples and misidentified only two healthy controls.

Mertens said another theory about the physiology of cancer sniffing casts it an airborne version of proteonics, the study of how concentrations of proteins in the bloodstream might represent fingerprints for the presence of cancer. “The speculation is that there are chemicals, perhaps very small molecules, that aerosolize in the breasts or come out in perspiration, and dogs have a keener sense of smell to discern them.”

Canines have 25 times more olfactory receptors than humans and break down concentrations of scents 100 million times lower than a human can. So it’s clear that certain dogs are sniffing something when it comes to cancer; the question is what.

For example, a study published in the British Medical Journal reported on six dogs — three cocker spaniels, a Labrador retriever, a papillon, and a mixed breed — that detected bladder cancer in the odor of urine 41% of the time.

“I’m afraid we won’t be doing away with mammography units and replacing them with dogs any time soon,” Mertens said. “Still, anecdotally, it seems to be the real deal.”

Something to Bark About

Even as positive studies emerge, doctors recognize that it’s a tougher task for dogs to identify many specifics about the cancerous cells, only that some might exist. And no one has come up with a good way to implement dogs for this purpose on a regular basis in actual health care facilities.

“The issue is not whether they can detect cancer, because clearly they can,” Tim Cole, a professor at Imperial College in London, told NurseWeek. “The issue is whether you can set up a system whereby they can communicate with you. That requires further ingenuity.”

None of that bothers St. Germain, who remains thankful for her dog’s role in persuading her to get screened. When she got involved in the Rays of Hope breast cancer walk last year, she named her team the Wiggins Warriors to honor the poodle, who died soon after her diagnosis at age 17.

“I had had a baseline mammogram at age 35 that was normal, and I would not have gone for one last year if Wiggins hadn’t stepped on me. I might not have found out about the cancer until it was too late,” said St. Germain, who recently turned 40 and is doing well with treatment.

“I had heard people mention seeing articles about cancer-sniffing dogs, but it was nice having one right in my house,” she added. “He saved my life.” 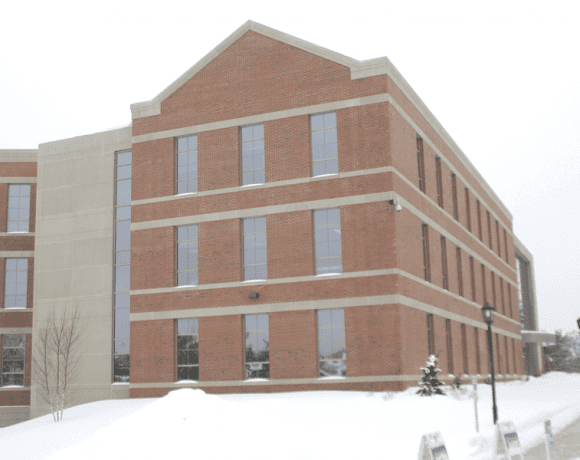