SPRINGFIELD — It was in 1995 that Big Y expanded its three smaller distribution facilities into the former Rexnord Roller Chain Manufacturing Co. on Roosevelt Avenue in Springfield. At the time, a staff of 27 people distributed produce and other products to 31 supermarkets throughout the region. Three years later, Big Y’s corporate headquarters and store support center moved to the same site.

Fast-forward to 2018, when Big Y’s distribution now supports 70 supermarkets out of the same space, and it is easy to see the need for an expanded facility. The current 189,000-square-foot distribution center has 19 receiving bays and operates round the clock seven days a week with a staff of 92 moving product through this system. In 1995, 3.5 million cases of product were shipped each year from this facility. Even eight years ago, Big Y’s distribution-center team shipped out nearly 15 million cases to stores. By the end of last year, that number had increased to more than 20 million cases. 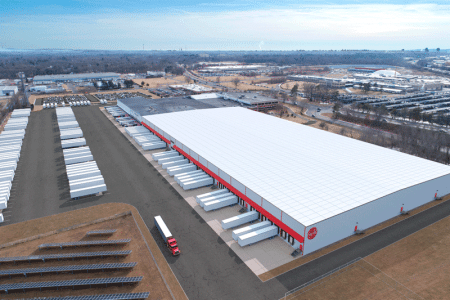 Big Y’s distribution center also houses a large recycling area for cardboard and plastic wrap and serves as a staging ground for meat donations as they are sent to area food banks.

Currently, local farmers have the option of delivering their fruits and vegetables to this distribution facility in order to save them the time and expense of driving to Big Y’s individual stores while ensuring freshness and speedy deliveries. This expansion will make it more efficient for them to get their fresh produce to the distribution center so that they can quickly get back to their farms.

Big Y has worked with Kevin Kennedy, Springfield’s chief Development officer, along with Mayor Domenic Sarno to develop a plan for this $35 million to $40 million project. In addition, Big Y is working with Springfield based Dennis Group, a local full service planning, architecture, engineering and construction management firm on this project. It is expected to be completed over the next 18 months.

Other elements of this expansion include some renovation within Big Y’s headquarters including a new employee café and a test kitchen to develop and test new recipes, concepts, meals, dietary and nutritional options, and products before rolling them out to consumers. In addition, the test kitchen can host food tastings and focus groups as well as serve as additional training for store teams each week. Plans also include a new employee entrance and visitors welcome and reception area.