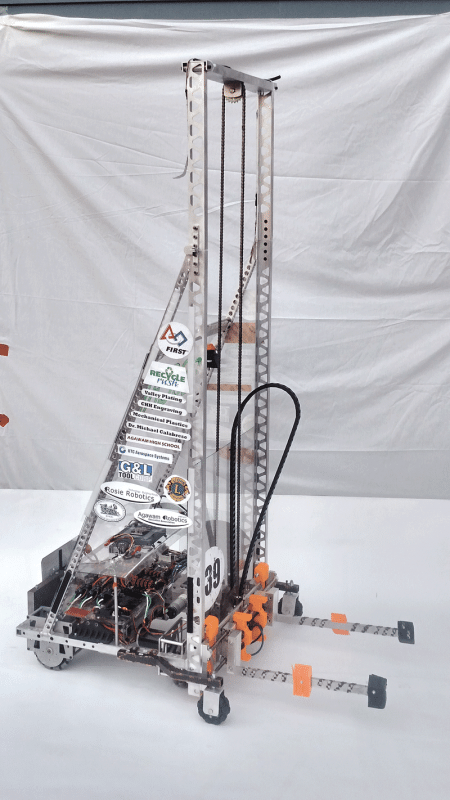 “Oscar’ the robot will be putting talents on display at the Western Mass. Business Expo on Nov. 4.

The large team of organizers for the Western Mass. Business Expo is busy with hundreds of details, large and small, as the Nov. 4 show approaches, including creation of nametags for those in the many categories of ‘participant.’

One of those tags will require just a single word: ‘Oscar.’ That’s the name given to the robot created by a team of Agawam High School students for a FIRST (For Inspiration and Recognition of Science and Technology) Robotics Competition staged earlier this year.

FIRST, an international, K-12, not-for-profit organization founded to inspire young people’s interest and participation in science and technology, said there were more than 3,000 entries, including Oscar, for a competition, or game, called Recycle Rush. As the name suggests, these robots were programmed to stack storage totes and recycling bins; Oscar ranked 65th in New England, just missing qualifying for the NE FIRST District Championships by five points.

Oscar, created by a team called ROSIE (Recognizing Outstanding Science-inspired Education) Robotics, will be putting his various talents on display at the Expo — show attendees may actually get an opportunity to take the controls — thus playing a significant role in a multi-faceted effort to spotlight one of the most important sectors of the region’s economy, precision manufacturing, and the many challenges facing it.

Indeed, while the Expo will showcase virtually every sector of the local economy — from banking to retail; healthcare to technology; education to tourism — this, the fifth edition of the show, will feature a number of programs and exhibits focused on manufacturing and efforts to return this once-proud industry to prominence in the region.

Individual elements of this focus on manufacturing and the workforce issues it now faces include a luncheon program hosted by the Professional Women’s Chamber of Western Mass. The keynote speaker will be Alison Lands, senior manager in Deloitte’s Strategy & Operations practice. She served as a co-author and editor of the New England Council and Deloitte’s recently published report, Advanced to Advantageous: The Case for New England’s Manufacturing Revolution, which will form the basis of her talk.

It will also include participation by several area high schools, which will be spotlighting not only robotics, but also their machining programs, which play a vital role in maintaining a steady flow of workers to area manufacturers.

The focus on this sector is critical, said Kristin Maier Carlson, president of Westfield-based Peerless Precision Inc., who noted that many young people — and their parents, unfortunately — have a perception of manufacturing that is outdated and inaccurate.

“The view that people have is from way back when — that this is not a job to be in,” she told BusinessWest. “Actually, you need a lot of skill to be machinist, and this is a very viable alternative for those who are not looking to go to college.”

She said that, while running operations at Peerless, she’s also on a mission to help people get an accurate look at her industry and perhaps become motivated to join it. Actually, her work is a continuation of her father’s mission to achieve that same end.

Larry Maier acquired Peerless in 1997, and years later took a leadership role with the National Tooling & Machining Assoc. (NTMA) and its efforts to educate several constituencies about precision manufacturing with the goal of securing an adequate future workforce for shops here and across the country.

When her father was diagnosed with colon cancer, Maier Carlson, who said she grew up working at the shop sweeping floors and later cutting material on a band saw, returned to this region from San Diego to help determine its future course. By the time Larry succumbed to the disease, she had made up her mind not to sell the operation, but lead it to new heights.

While doing so, she is continuing her father’s work in education and building a workforce, and currently playing a leadership role at the NTMA. As part of that, she and other family members created the Larry A. Maier Memorial Educational Fund to help carry out the task of enlightening young people — especially those at the middle-school and even elementary-school levels — about the opportunities in manufacturing.

Money from that fund will be used to offset the costs associated with bringing the various high schools to the Expo and enabling them to show how their programs are both creating job opportunities and helping area manufacturers tackle the challenging workforce issues confronting them.

“Far more of our workers are closer to retirement than not,” said Maier Carlson. “We’re going to need to replace those workers, and this is an ongoing challenge. Area manufacturers need to partner with our area schools to not only educate people about opportunities in this field, but also provide the training necessary to help people become qualified to take these jobs. The Expo will showcase how these partnerships are working.”

As for Oscar, he will be one of at least two ‘competition robots’ that the ROSIE team will bring to the Expo, said Dana Henry, chief mentor for the team, adding that he expects these machines to turn some heads, impress attendees, and bring attention to careers that fall in the broad category called STEM — science, technology, education, and mathematics.

“We’ll have a half-dozen students there talking about the science, engineering, and manufacturing that goes into this,” said Henry. “We have to do all our own programming, wiring, machining, and CAD work for this — the whole ball of wax to build this 120-pound machine in six weeks. It should be very eye-opening.”

As will many other aspects of an Expo that has added a number of compelling elements to this year’s itinerary. Visit www.wmbexpo.com for more information and to register.