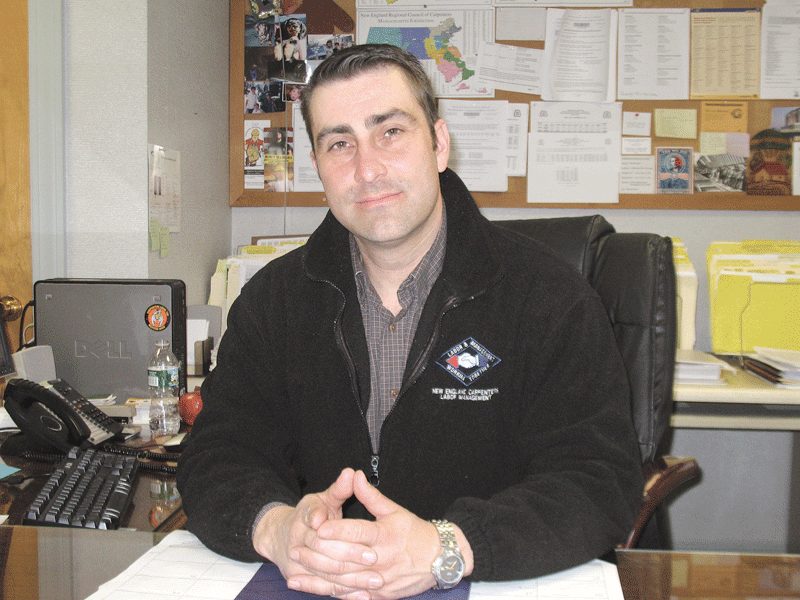 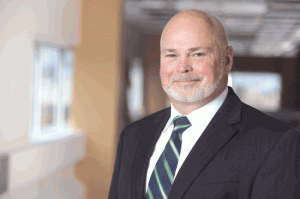 Steve Killian says the health care sector provides plenty of opportunities for contractors — who know how to work around patients.

Hospitals and other medical facilities have long been a key driver in the region’s construction industry; even during the past few years of recession, such projects kept many firms busy. But not every contractor can tackle a job in a clinical setting, say builders with experience in the field. From privacy and patient-flow concerns to infection and particle control, working around medically compromised individuals poses a set of challenges not present when building, say, an office or store. Still, gaining the skills to compete in this arena can be well-worth the effort.

Dr. Louis Durkin’s workplace never closes.
So when his department undergoes a major renovation, as it is now, construction crews have to work around the employees and the customers, and sometimes both get moved around to accommodate the remodeling.
That would be inconvenient at any business — except that Durkin is chief of the Emergency Department at Mercy Medical Center, and his ‘customers’ are patients, many of them in seriously compromised health, and some clinging to life as they’re wheeled in.
Not exactly the right crowd to bring into a construction zone.
“Imagine a patient who’s in severe respiratory distress and bringing them through a dust cloud where ER construction is happening,” Durkin said. Fortunately, that scenario is only an imaginary one, thanks to a complicated dance that medical staff and construction crews engage in every day to ensure patient privacy and infection control while renovation continues.
“We’re taking care of patients, and we’ve done a good job sequestering where we’re doing construction; we haven’t seen any dust in the patient-care areas,” he told BusinessWest. “We’ve done a great job keeping dust and noise to a minimum, and that’s a huge consideration; it hasn’t been an issue.”
To get to that point, though, a builder needs to know something about working in a health care facility.
“There’s a host of things to deal with in the clinical setting as opposed to the standard administrative setting,” said Stephen Killian, president of Barr & Barr, a Springfield-based general contractor that specializes in two traditionally robust construction sectors in Western Mass., health care and higher education. But in a medical setting — unlike school or college renovations, which can be scheduled when classes aren’t in session — there’s often no way to remove the patients from the picture.
With privacy laws strengthened under the Health Insurance Portability and Accountability Act (HIPAA) — and with medical centers more vigilant about infection control since a series of reports a decade ago detailing an epidemic of preventable deaths in hospitals — contractors and tradespeople working in that arena simply need to know more than ever before.
“Some people don’t succeed very well,” Killian said. “There are firms that say, ‘we’d love to go into that; we’d love to go work for Baystate,’ and they come in with a very competitive number. But in the end, they’re ill-equipped to do the job appropriately.” 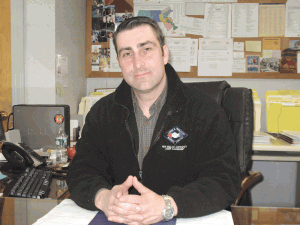 Jason Garand agrees. As business manager of the New England Regional Council of Carpenters Local 108, he is promoting a training program for members who perform work in a clinical environment. The union-created curriculum covers everything from controlling airborne contaminants to mold remediation to routing materials and personnel around patients and staff. Graduates earn certifications from the union in ‘best practices in health care construction in occupied facilities’ and ‘blood borne pathogens.’
“It’s a program designed to create awareness for tradespeople who come into an occupied facility,” Garand said. “There are many problems people might not aware of when they’re cutting into walls or opening up an old floor or ceiling; you’re releasing pathogens, mold, and mildew.
“As a carpenters’ union, we live in this community, and we want to have our membership trained, especially in an occupied setting,” he added. “So we started to ask where they’re vulnerable, where they have liability issues.”
For this issue’s focus on construction, BusinessWest talked to several professionals about what it takes to build, remodel, and upgrade in a clinical environment, and why hospitals are taking these efforts more seriously than ever.

Union Label
Karen Sprague, vice president of Holyoke-based builder A.R. Green & Son, said her company was among the first to have its employees (eight of them, to be exact) certified in the union’s program. She said changes in the health-insurance industry require hospitals to accept more liability for infection-related incidents, making this sort of education program even more critical.
“It also extends to nursing homes,” Sprague said of the insurance changes. “It’s not just hospitals, but other facilities; these insurance regulations trickle down to all of them.”
Garand said mitigating risks from airborne particles extends beyond erecting a temporary wall, but often involves blocking off a work area correctly and using negative airflow, so that dust, germs, and pathogens don’t get into a patient-care area.
“We think it’s important for our contractors to have an educated workforce, so they can walk into Baystate or other hospitals and say, ‘our guys are aware of these problems, and not only are they putting up a wall so a little child doesn’t walk through, but they’re keeping their air on this side and not letting it pass through,” he told BusinessWest.
“One of the benefits for employers is, instead of thinking of ‘best-trained’ in terms of physically skilled, we’re taking it to a new level, bringing another layer of education,” Garand continued. “Instead of a tradesperson saying, ‘I have to knock this wall down as fast as possible,’ it’s realizing that this wall could have mold and mildew behind it, from when the floors were washed and water leaked in.”
If a construction company doesn’t consider this possibility, it can create that liability that medical centers fear, he added. “So hospitals will see this [certification] as a benefit; they’ll know they don’t have to worry about someone coming in there and releasing polluted air into the hospital, where it can hit the most vulnerable.”
For builders, it’s potentially a marketing tool. If A.R. Green can get the word out that its employees are trained in hospital protocol and how to work in a medical setting, “it’s going to trickle down to me as a general contractor,” Sprague said. “If I can save the hospital money, they’re more likely to hire me than somebody who doesn’t have that training.”
It’s not just general contractors looking for an edge in the fertile health care market, though. Mark Kent, sales engineer at Springfield-based HVAC company Hurley & David, was recently certified as a health care facility design professional by the American Society of Heating, Refrigeration and Air Conditioning Engineers (ASHRAE).
The ASHRAE certification program identifies individuals who have mastered a body of knowledge covering the successful design and operation of health care facilities, Kent said.
“Someone who successfully passes the exam for that certification has demonstrated an understanding of the specific codes and requirements and understands a health care facility’s specific needs,” Kent said.
“When it comes to infection control and patient privacy, the number of issues that exist in a health care facility is sometimes mindboggling,” he added. “The purpose of the certification is to assure our potential health care customers that we have a broad understanding of the issues they face, and that, when we design a solution for them, we have tried to assess as many of these issues as possible, and certainly we pass that on to our guys in the field who are actually executing the work.”
It’s an important point of differentiation for Hurley & David, which has done extensive work in medical settings, Kent said. “We are fortunate to have a couple of health care facilities as customers, and we oftentimes work directly for them, as well as working through general contractors and construction managers.”

Have Patients
Understanding how to work around patients and residents goes beyond infection and particle control, however. “The main issue is that things are always changing on a daily basis,” said Durkin of Mercy’s ED project, which is being conducted by Ludlow-based Raymond R. Houle Construction, another contractor that specializes in the health care field.
“The eventual outcome is ending up with more space and better flow, so things are more convenient,” Durkin said. “But when construction is going on, things are obviously less convenient, and it changes every day. One day you have a whole pod open with rooms and storage, and the next day none of it is available. You have to be ready to move different kinds of patients into different areas as needed.”
For example, when he spoke to BusinessWest, the ED was preparing for three days of work on its sprinkler system, necessitating the loss of its FastTrack area, which serves less-critical patients and handles some 40% of total traffic each day. “We have to see all those patients — close to 100 — somewhere else.”
Durkin said the renovation would go much quicker if the hospital could just close down the emergency room for awhile, but, obviously, that’s not possible. In fact, the effort was drawn out because of flu and pneumonia season, which typically causes a surge in patient traffic. “We had to add another phase to the project so we didn’t lose too many beds at one time. The project will take longer than anticipated, but having a small bed capacity at the busiest time of the year wasn’t going to work.”
Robert Aquadro, project manager for Barr & Barr, said disturbing patients who aren’t feeling well brings up a host of undesirable issues.
“It’s very hard to mitigate every aspect, and to do it, you have to be flexible,” he said. “To do construction in a hospital, you always have to be ready to stop, move on, and do something else.”
In addition, Killian explained that the Joint Commission on Accreditation of Healthcare Organizations has created the Interim Life Safety Measures program, which works with hospitals to identify and mitigate risks to patients during construction. “It may seem like overkill, but you have to have it in place,” he said. “You have to be mindful of these proactive safety measures.”
He should know; Barr & Barr has certainly forged a deep niche in health care, recently finishing projects at Mercy, Holyoke Medical Center, and Cooley Dickinson Hospital, among others.
“Our staff members are frankly cognizant of what it’s like to be around patients,” he said. “Someone starting out in this area may have the knowledge, but not the staff experience, and it’s a risk for them and the hospital. At the end of the day, we’re all about patient care. It’s not about getting a job done faster and cheaper; it’s about patient care, and how that’s being taken care of during the construction process.”
As for Durkin, he knows Mercy’s emergency area will eventually be more spacious and easier to navigate, and that’s worth what he admitted is occasionally a tight squeeze for staff working around the renovation.
“It’ll end up being an eight-month ordeal,” he said. But as long as patients aren’t the ones being inconvenienced — or worse — it’s a hassle he can live with.