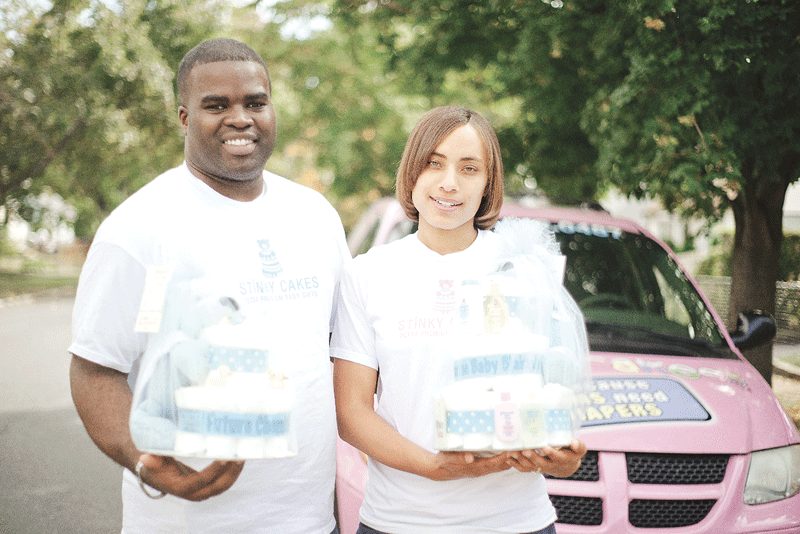 This Venture Is About Much More Than Diapers 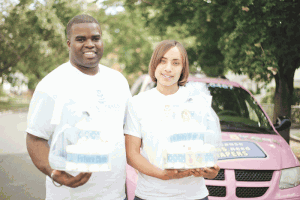 What’s in a name? A perfect opportunity for branding a great entrepreneurial idea, said Mychal Connolly.
After the birth of their second child, Connolly and his wife, Adrienne, fielded the all-too-common question asked of parents — ‘What can we get you?’
“Friends and family always want to help,” he said, “but most everything we already owned from our firstborn. There was stuff we had still in boxes that we’d never used.”
What the pair did want, however, was what all parents do need: diapers.
“Their thought was, well … that’s not really a gift, though,” he remembered. “And sure, there’s a little bit of a stigma about giving a box of diapers as a gift. Some people might even be insulted by it.”
The idea behind Stinky Cakes was to make diaper giving fun as well as practical. “We needed to transform them into gift mode,” Adrienne said. “If you walk in to a party with a Stinky Cake, it’s not about the diapers, it’s about the gift itself.”
The idea of the ‘cakes,’ built from tiers of diapers, baby toiletries, toys, books, and just about anything you can think of, came easily to the pair. What wasn’t so immediate was a good name for the enterprise. “We thought of many different names,” Mychal said, “but none of them seemed to fit well, or they would need so much marketing just to explain what they were.
“At the time,” he continued, “my oldest son happened to come into the room and said ‘Dada, I did stinkies!’ I looked at Adrienne, and our faces lit up. I said, ‘what about Stinky Cakes?’ She said, ‘great!’”
The name is memorable, the pair said, which is good for recognition in the marketplace, but it also lives up to a spirit of whimsy and fun, which is equally important for the company.
Prices start at $24.99, which makes the cakes a good gift that most everyone can afford. But, Mychal said, the sky is the limit as to what the creative forces can conjure up. “We love getting custom orders, because that challenges us,” he said, describing a number of different projects, from a three-foot tall Dr. Seuss cake made for the Springfield Museums to a Japanese-themed cake complete with diaper ‘sushi.’
He held up a smaller-sized confection, what he called a ‘corporate cupcake,’ this for an area lab. “On one hand,” he said, “as a company you show that you care about your employees or your clients. For the business, their logo is on it. If this comes to a baby shower, or a party, it’s one more way to get your company out there. It’s a smart move to give this beyond a generic gift.”
In addition, the Connellys strive for relevance beyond a baby’s immediate needs. Adrienne described a cake based on Eric Carle’s The Hungry Caterpillar, which contained a copy of the book, tying in a goal for children’s literacy. In fact, the two said that, while the business might be best-known for making their namesake cakes, they have a commitment to much larger issues.
Advocacy for teen pregnancy and foster care are two of Adrienne’s driving passions, and as a Springfield native, her goal is to be a positive role model for city youth. “Being from here,” she explained, “I hate to see the direction that the city could be going in. There’s a lot of teen pregnancy, and I think that for many, the reality of their being pregnant is never made clear to them.
“There are also a lot of kids in foster care,” she continued, “and they need some form of guidance, or support, or mentoring. They need positive role models in their life, because a lot of what they see out there … well, I think it’s fair to say that they might be exposed to people that aren’t the best influences. They need to know that they, themselves, can have a better path.”
From Mychal’s perspective, becoming an entrepreneur is an excellent way to elevate oneself out of the path of juvenile crime. In that respect, he considers himself a role model and has a message for other young people in the region: “change your product,” he stated. “From illegal activity, put your focus into something legitimate. Change it to anything. I mean, we’re doing it with diapers. There are so many things that you can do to get yourself out of crime.”
The Connollys are currently mentoring a pregnant teen who, at one time, aspired only to public assistance. But under their tutelage, the girl is attending Westfield State University, and Mychal reports that she is thrilled about the communications programs at her school.
“It’s just a matter of putting kids into the right environment, so that they can see a better way,” he said, adding, “if you don’t have any goals or dreams, and if you can’t picture yourself in a better place, it might not happen.”
Stinky Cakes might soon be finding itself in a better place, thanks to a recent $10,000 grant from an online resource called TheCASHFLOW. Mychal said that the money will go into bolstering their marketing efforts, but will also help put Stinky Cakes on the map, quite literally. A city property is envisioned as the new headquarters for the home-based company, which will help when the pair launches their foray into baby-shower planning, called the Stinky Cakes Experience.
“We will be able to do just about any theme you can imagine,” Mychal said, “and we’ll take care of everything.”
If their business grows as planned, the only odor the Connellys will have to worry about is the sweet smell of success. 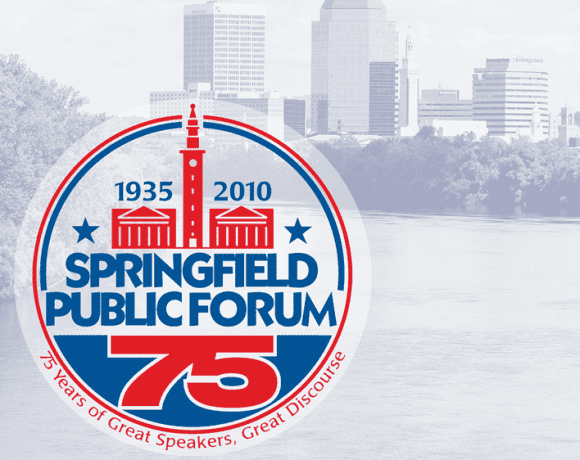 Program Strives to Take Women from a Job to a Career