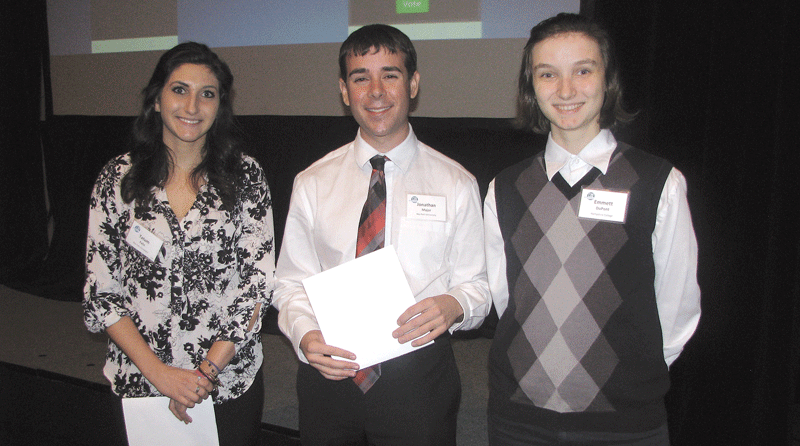 From left, Tatum Fahs and Jonathan Major of Bay Path University and Emmett DuPont of Hampshire College took the top three spots at the conference’s ‘idea jam,’ which featured more than 400 participants.

As the founder of FEAT Socks, Parker Burr sells hundreds of thousands of socks worldwide, and expects to top $2 million in sales next year. But one of his fondest memories is selling his cozy footwear, one pair at a time, from behind a table at an Amherst bus stop.

“The key is to go out and sell something,” he told an audience of young entrepreneurs this month at the 12th annual Grinspoon, Garvey & Young Entrepreneurship Conference. “Everyone wants to know how to get from zero to a hundred million dollars. But don’t be afraid of humble beginnings, because those are the best. Selling at a bus stop, to me, that was the most exciting time. So slow down, just sell one, then worry about selling two, then keep going.”

More than 400 students from 14 area colleges attended the event at the MassMutual Center, which included hands-on workshops and exhibits, networking, and what was billed as the world’s largest ‘idea jam,’ where participants pitched their entrepreneurial ideas to their peers in a bracket format, with votes determining who advanced to the next round, and the next, and so on.

Once the field was whittled down to the final 10, those students gave one-minute elevator pitches to the full assembly from the main stage, before Burr’s keynote address. Afterward, the top three vote-getters delivered final pitches. In the last round of voting, Jonathan Major of Bay Path University earned top honors — and a $100 check — for his product, which uses a car adapter to keep food warm on the go; he is working on adding keep-cold capabilities as well.

The other two finalists, nabbing $25 each, were Tatum Fahs of Bay Path, who conceptualized an infant stroller that allows for ‘tummy time’; and Emmett DuPont of Hampshire College, whose idea provides housing supports for transgender youth, a population with a lower life expectancy than most demographics due to drug addiction, suicide, and hate crimes, all of which are exacerbated by alienation from families.

Everyone wants to know how to get from zero to a hundred million dollars. But don’t be afraid of humble beginnings, because those are the best.”

“We’re always so impressed with the diversity and sheer number of students who come to downtown Springfield to attend this conference,” said Cari Carpenter, director of entrepreneurship initiatives at the Harold Grinspoon Charitable Initiative, which organizes the event along with the 14 colleges. “It really gives them validation that there’s a community of people supporting them, and it gives them some tools.”

For example, the day included breakout sessions on topics like “Pitch Like an Entrepreneurial Pro” and “Social Entrepreneurship Opportunity and Impact.”

“They were able to learn strategies for doing good pitches and other kinds of things about entrepreneurship,” Carpenter told BusinessWest. “It’s a goal of the conference to get people to network and meet each other, and really educate these students.”

The Entrepreneurship Conference is held annually with the goal of inspiring, motivating, and supporting college students who seek to turn ideas into businesses. Birton Cowden, who helped organize the idea jam, sees myriad benefits in such events.

“We do a lot of these kinds of things on campus,” said Cowden, associate director of the Berthiaume Center for Entrepreneurship at UMass Amherst. “We’ve done idea jams with 70 to 100 people. Here, we had to recraft it for 400 people; that’s why we did the bracketed system.

“There are a lot of stakeholders who feel this is important,” he went on, “starting with the students, who come together and find a community of other people like them. They say, ‘I thought I was crazy, but these are my people.’ Everyone always says they’re energized and encouraged to actually do something with that idea. It gives them confidence.”

At the same time, however, they understand that a new enterprise takes work and commitment, Cowden told BusinessWest. “They learn, ‘people like me are nothing special. There’s no pixie dust here — just things I can do.’”

Burr attested to that fact in his address, which tracked the evolution of FEAT Socks from a small enterprise, selling a few dozen pairs of socks on the UMass Amherst campus as recently as 2014, into a lifestyle brand with a worldwide reach, producing and selling wool socks, dress socks, athletic socks, and more. Most recently, the company signed Massachusetts native and Olympic gold medalist Aly Raisman, and launched her line. Ever-nimble, FEAT just released a limited-edition pair for Cubs fans, with one foot sporting ‘1908’ and other ‘2016.’

“The company has just skyrocketed,” said Burr, whose enterprise is now based in California. “We’re just now becoming true sock people and sock experts, after we sold so many. All this has taught me that you don’t have to know everything; you don’t have to be an expert at anything in order to start building something great. If I had waited until I felt I was a sock expert, I would never have been able to get where I am. I just started. That was the important thing.”

“Work hard. Do something,” Burr concluded. “Throw yourself into every situation possible, and let serendipity take over.”