Coping with a New Reality

WNEU, Like All Law Schools, Is Adjusting to Lower Enrollment 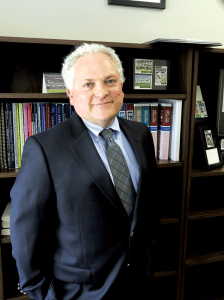 Eric Gouvin says WNEU Law, like any business weathering a storm, is focused on both increasing revenues and reducing expenses.

Eric Gouvin says there is ongoing discussion and debate within higher education about why enrollment is down at law schools across the nation.

But there is no debating that this decline is real and quite dramatic — some observers are even speculating that some institutions may not survive it — and that there is little to suggest that things are going to improve significantly any time soon, said Gouvin, dean of the Western New England University School of Law.

“It’s all across the country, a national trend, and while people have different perspectives on what’s happening and why it’s happening, no one can deny that it is happening,” he told BusinessWest. “There are fewer people going to law school — it’s as simple as that.”

But that fall number actually represents an increase from a year ago, when only 85 people entered the program.

“We exceeded our expectations for this fall — we budgeted for fewer than 85,” said Gouvin, crediting “talented admissions people” and apparently attractive pricing and programs (more on those variables later) for the slight surge in the numbers for this fall. But sharp enrollment declines from the days before the Great Recession are real, and most analysts expect them to continue, he went on, adding that WNEU, like most other schools, is adjusting to what some are calling a new reality.

Overall, the law school is doing what businesses do when they face fiscal adversity, said Gouvin, and that is creating ways to both enhance revenues and cut expenses without impacting quality. The school is trimming staff through attrition — several faculty members have retired, and more are expected to do so over the next few years — while also adding new programs, some of them to attract students who aren’t necessarily looking to pursue a career practicing law. Such initiatives include a master of laws and letters (LLM) degree in estate planning and elder law, introduced in 2004, and other programs.

“That’s a supplemental source of income for us,” he said of the LLM offering, adding that the school will roll out a similar program for non-lawyers in 2015.

“This is for accountants, financial planners, and insurance professionals who need to deal with a lot of heavy-duty legal issues around planning for clients, but don’t want to spend three or four years getting a JD, and don’t need to,” he explained. “They just need some working knowledge of those technical provisions that will allow them to work better with counsel, and that’s why we think this will be an attractive offering.”

What’s more, the school is taking steps to make itself more competitive when it comes to attracting those who are willing to go to law school. These include freezing tuition for the next three years and becoming more aggressive and imaginative with scholarships and other forms of aid.

“We need more revenue, obviously, but increasing tuition for the JD (juris doctor) program is a non-starter — there’s a lot of price sensitivity right now,” Gouvin explained. “One of the things applicants focus on is affordability and a cost-benefit analysis. So we have frozen tuition for the next few years and are using that as a tool so students can look at us and say, ‘I know what I’m getting into here — I’m not going to be surprised by a tuition jump in the second or third year.’”

For this issue and its focus on law, BusinessWest talked with Gouvin about the decline in law-school enrollment, — and how WNEU is responding to what has become a considerable challenge for institutions across the country.

Gouvin said that, overall, many people in academia are uncomfortable with the notion of talking about higher education as a business and discussing matters within the framework of the law of supply and demand.

But for administrators at the nation’s law schools, there is no real choice in the matter. The decline in enrollment is that severe, and the outlook for the immediate future calls for little change in the forecast.

As Gouvin mentioned, there is some debate about why this happening, with theories including the recent troubles law-school graduates have had finding work amid an economic recovery that has been less than robust in many parts of the country, as well as an unwillingness among larger numbers of young people to take on the massive amounts of debt that most law-school students incur, given the uneasiness in the job market.

While the talk and speculation continue about why law schools are facing what many are now describing as a crisis, much of the discussion has shifted to what schools are doing in response.

Indeed, steps taken by various institutions have included everything from freezing tuition to offering buyouts to faculty and staff to creating more programs to people who won’t ever practice law, but may well need some of the skill sets lawyers possess. At New England Law School in Boston, the dean took a voluntary 25% pay cut to help balance the books.

At WNEU, said Gouvin, the broad goals are to trim expenses without impacting the overall quality of the program, become a more efficient operation, and make the school as competitive as possible in what has become a more intense battle for top students.

The school already has some competitive edges, said the dean, adding that the task at hand is to take full advantage of them.

One such advantage is price.

“Our tuition is $39,400, and while that sounds like a lot of money, when you compare it to other law schools, it’s a bargain,” he said. “Among private institutions, we’re very low.”

Another edge, says Gouvin, is simple geography. Western New England is the only accredited law school in the Commonwealth west of Greater Boston, he noted, adding that this uniqueness provides opportunities in the form of internships and clerkships in area courts and with judges assigned to courts in this region. Meanwhile, the rural location is attractive to those who don’t want to go to school in a big city and have no intention of working in one.

“We have a monopoly on really great placement with judges and agencies,” he said. “In addition, we have some great clinical programs that provide hands-on experience.

“A lot of the people who come here don’t want to be in a big city,” he went on. “Many of our students are from small and medium-sized cities, and they intend to go back to those communities to practice law.”

Still another advantage for the school is its programming, which Gouvin believes is more experiential in nature than what many competitors are offering.

“Addressing what lawyers do in real life is high on our list,” he told BusinessWest, “and we’re hoping that program offerings, together with an attractive price, make a good case for us.”

While working to increase revenues, the school is also focused on the other side of the equation — expenses, said Gouvin, adding that WNEU has become more efficient out of both desire and necessity.

“No one loves to see a downturn, but they often make you focus on things that maybe you took for granted,” he explained. “You look at things and ask yourself, ‘can we do that differently and better?’ And there have been several instances where we could.”

As examples, he listed merging some operations, such as the library and alumni services, with the university, and other steps that help avoid duplication of efforts.

“We have people in the law who are now what I would call utility players,” he noted. “They don’t say, ‘I do this, and this is all I do’; now it’s ‘I do whatever needs to be done to move the ball ahead.’”

Gouvin said much of the conjecture regarding the decline in law-school enrollment concerns whether this all temporary, and if so, how temporary.

“That’s the million-dollar question,” he said, adding quickly that no one really knows the answer. Variables include everything from how much more the economy will rebound to when the Baby Boom-age (and older) attorneys will retire en masse (many have put retirement on hold because of the economy), and much more work traditionally handled by attorneys will instead be undertaken by paralegals and others without law degrees — an ongoing trend that has many in the industry concerned about job security.

While watching all these factors play out, law-school administrators have little choice but to adjust to a changing landscape and not merely hope that conditions will improve.

As Gouvin said, they have to make their case — and make it a compelling one.