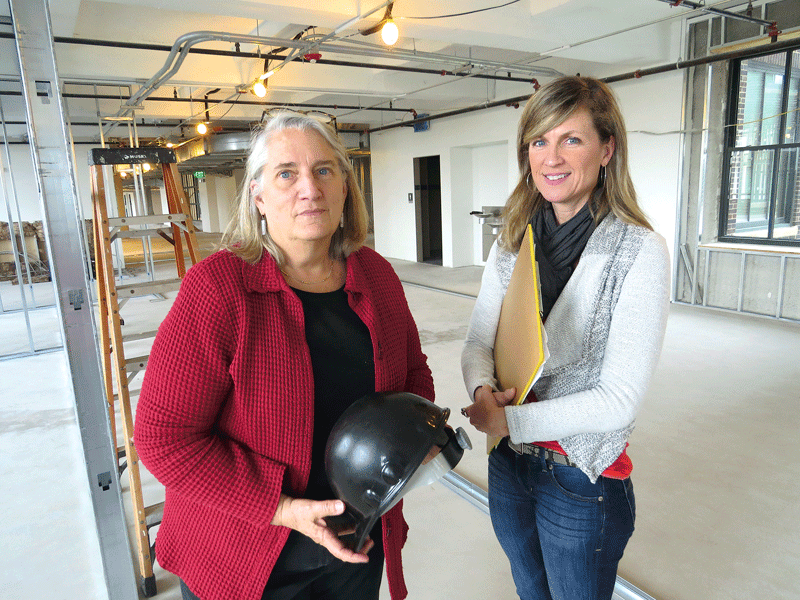 Kerry Dietz, left, and Nancy O’Brien offer a tour of the space in Union Station that will become the company’s new home.

Kerry Dietz was asked about the circumstances that will bring the architecture firm she put her name on 32 years ago to the second floor of the recently renovated Union Station this summer, making her company the celebrated first tenant in the spacious office area of the landmark.

She paused for a long moment, as if she were reconstructing (that’s one industry term) the timeline of events in her mind, before summoning another phrase used by those in her profession.
“Let’s just say it was a process,” she told BusinessWest before breaking into a broad smile, something she would do repeatedly as she talked about this move, what it means for the company, and what it might mean for the nearly 90-year-old station itself.

But first, that process. It began, she said, with the realization that, while there are many reasons to love the company’s home for 22 years in the so-called Patton Building (circa 1872) on Hampden Street in downtown Springfield — everything from a large skylight to ornate tin ceilings to brass handrails — there just aren’t enough of them.

Or, to be more precise, perhaps, there are not as many as there were when this company was younger and smaller.

Indeed, the venture that started with three employees has grown to now boast 25, and they are spread over two floors of the Patton Building, said Dietz, noting that the company has grown within that building in an organic, but “not very thoughtful way.”

“One of the things that this space has are these great big offices,” she explained. “They were in many ways too big for two people, two small for three people … it’s lovely space and great windows, but it’s not an efficient flow, and it tends to isolate people.”

Nancy O’Brien, an interior designer with the firm who has spent the past few months designing the new space at Union Station, agreed. The existing space makes things logistically difficult, and collaboration … well, that’s not as easy as it should be.

“There’s no open studio space, so when we’re trying to collaborate, we’re running up and down stairs,” she noted. “That’s great exercise, but it’s not good for efficiency.”

Such introspection and close examination of quarters is commonplace when a lease is up, and this was the situation facing the Dietz company, said its founder, adding that this amounted to step one in that aforementioned process.

Step two was deciding whether these shortcomings were enough to warrant a move; eventually, the answer became what amounted to a “soft yes,” said Dietz, who at one point in the conversation with BusinessWest turned to O’Brien and, while adding up all that the company was leaving behind on Hampden Street, said under her breath,“tell me why we’re moving again?”

The answer to that question was the roughly 8,000 square feet of space now being fitted out just around the corner from the conference room where she was talking with BusinessWest. 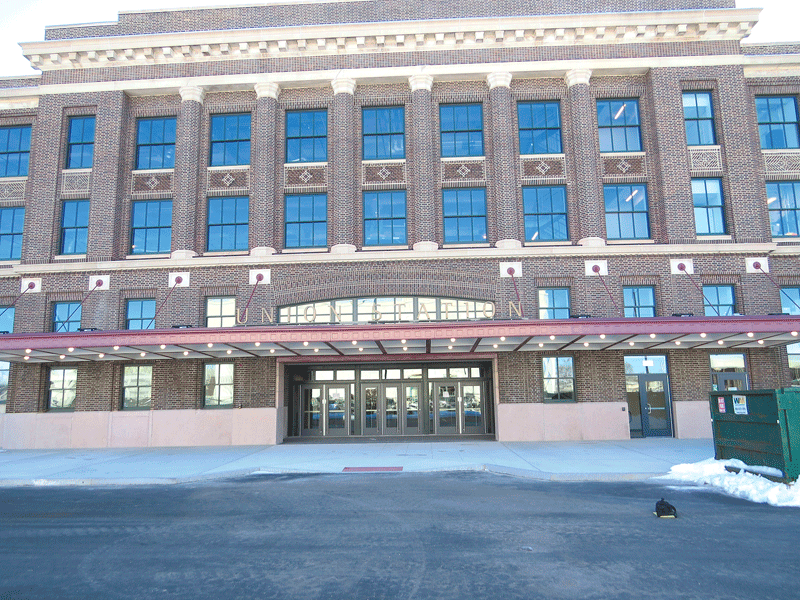 “This is what an architect’s office should look like — or, at least it will be once we’re done with it,” said Dietz, referring specifically to the floor plan O’Brien had placed on the table. It revealed a spacious, wide-open area with light streaming in from large windows on three sides.

“We’ve got light coming in from all directions in this space,” Dietz said of the company’s new offices, adding that, in addition to more light, the space provides more and better space in which the team can function. “There’s not a single dark space there except for one little quiet room.”

On top of all that, the move places the company in a landmark building and within a landmark restoration and redevelopment effort, one that city officials believe will be a catalyst for further development in that area and a point of pride for the community.

Dietz said all these points were part of the discussion and part of that aforementioned process. She might have summed things up best by relaying the comments of one of her male co-workers.

“He said, ‘the 6-year-old boy in me is excited about being in a train station,’” she recalled, adding that she’s excited, too, and for a number of reasons.

No, that word is not in the dictionary, but it effectively conveyed her point.

Her company, which has, as one might expect, accumulated vast amounts of paper over its history and kept far more than it should have or needed, has been getting rid of some.

“We’ve filled 49 of those recycling barrels — the big blue ones, not the little ones,” she said, using language everyone in business would understand. “That’s about 14,000 pounds of paper we took out, and we needed to. We don’t need 14 iterations of a schematic we did years ago; it’s all on computer.”

These de-papering efforts are just another part of that process that will have the Dietz company — which has designed everything from the UMass Center at Springfield to a number of senior-living projects to dorms at Smith College — in its new digs, one full floor above the station’s main concourse, by mid-July, according to the latest timeline.

That’s a very aggressive target date, said Dietz, noting that this process began just a few months ago, really, but it’s a timetable the company and the Springfield Redevelopment Authority, which manages the station, are quite eager to meet.

As for exactly when the process began, Dietz was having a harder time with that date, but she believes it was last fall, as the company began that introspective, forward-looking analysis that commences as a lease gets set to end, and soon decided that relocation was needed.

“I needed to move us to the next level,” said Dietz. “And this was a way to do that.”

She told BusinessWest she did look at a few other sites in Springfield, but admits that the search ended when she got her first look at the space being renovated within Union Station, a building she had never been in but had read and heard about — always with use of the past and future tenses — throughout her career.

That visit might have occurred earlier this year, by her estimation, although O’Brien recalls that the first tour was probably taken before the holidays. Whenever it happened, it was enough to soon take the discussion about whether to move, and to where, to a new place — its conclusion.

When asked about what cinched matters for her and the company, Dietz said there were many factors.

This included everything from the ability to eliminate those shortcomings with the space on Hampden Street to those aforementioned windows; from a desire to assist the city as it went about the stern challenge of making the station a viable entity to something that would resonate with any architect, and any business owner — new systems in an historic, nearly century-old building.

Indeed, above all, this move had to make sense for the company, and to Dietz, it did, on every level (still another industry term), especially the one regarding practicality.

“I wanted to be in a building that had all new stuff in it — brand-new systems, brand-new everything,” she explained. “But new stuff in an old, historic building — that’s even better; there’s history here that’s really quite wonderful.”

And with that, both she and O’Brien waxed nostalgic about the role the station and the trains that rumbled in and out of it played in the city’s history — while also expressing the hope that such prominence can be restored in the future.

“One of the things I’m really hopeful for, and I hope it happens in my professional lifetime, is the east-west train to Boston,” said Dietz. “I spend so much time on the road between here and Boston, and it’s such a waste of resources, time, and money. It’s crazy.”

Whether the east-west train becomes reality or not remains to be seen, but the Dietz company’s future in Union Station is already secure, and its founder is proud to be a big part of the next chapter in the landmark’s history.

As she talked with BusinessWest, Dietz was only a day removed from finalizing the furniture and the finishes for the new space in Union Station.

“It’s starting to get real now; we picked this color and that color … it’s really exciting, and I can’t wait to get in there and get to work,” she said, using words and phrases that could be echoed by countless others who have been involved with Union Station’s renovation for nearly four decades now.

Her company’s move has become part of a blueprint for progress at the station and within the city — in every sense of that phrase. 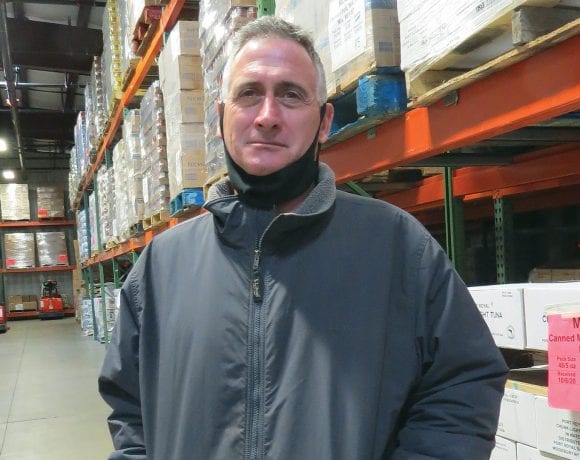 Food Bank Responds to Rising Need Fueled by the Pandemic